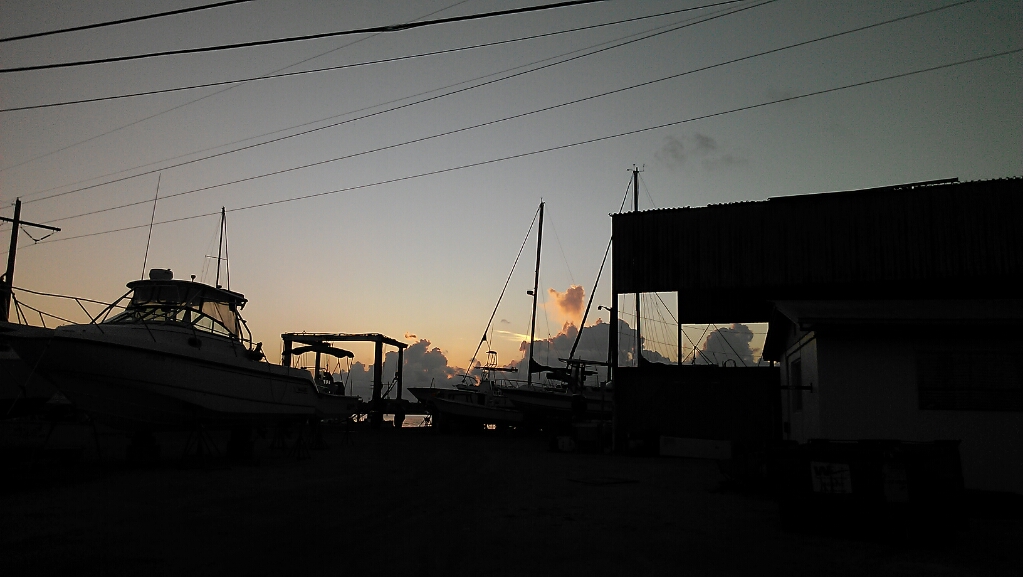 What a glorious start to the day in Key West, a line of clouds, a blue sky overhead and the promise of sun. Lots of sun, exactly how I like it. 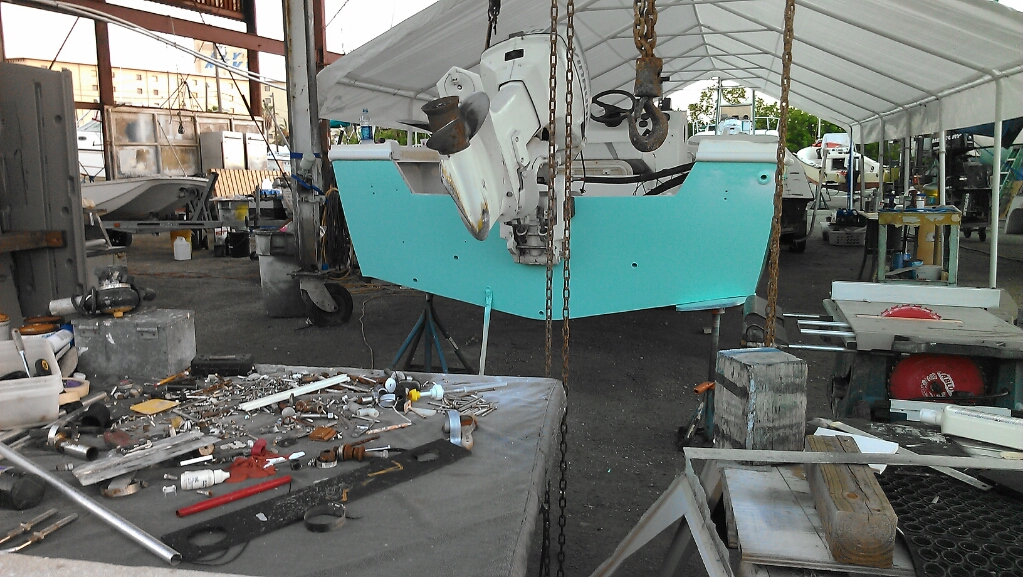 Fiberglass has taken the place of a lot of the routine struggle to keep a boat afloat. Modern boats are made of plastic in one form or another, and that being the case the complexities of wooden hulls have largely been replaced by almost indestructible glass fiber mating and glue. 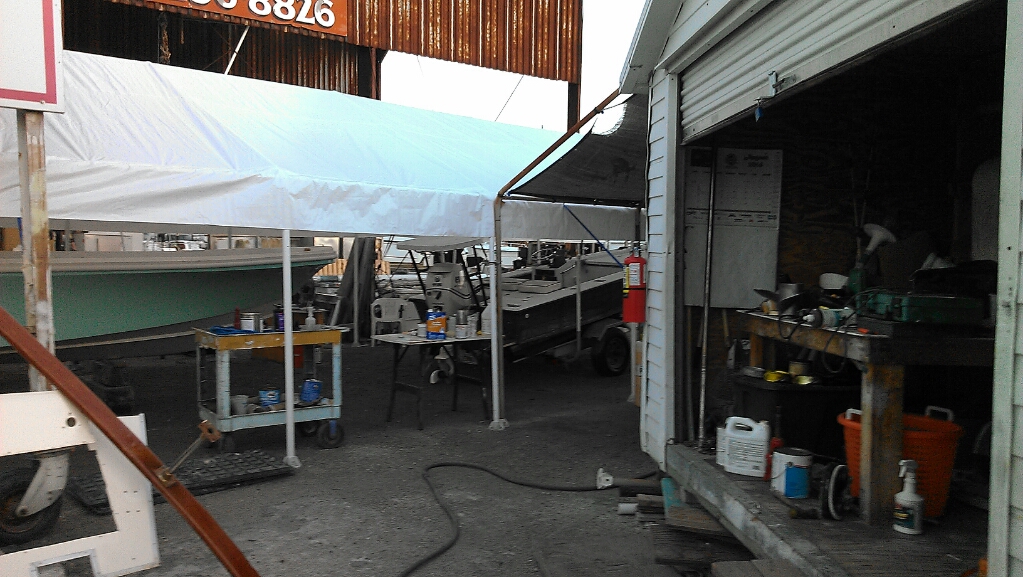 Walking Cheyenne past the boat workshop and Spencer's Boatyard I was reminded that not all industry starts at the crack of dawn. You'd think it would be easier to do outdoor work early in the day, 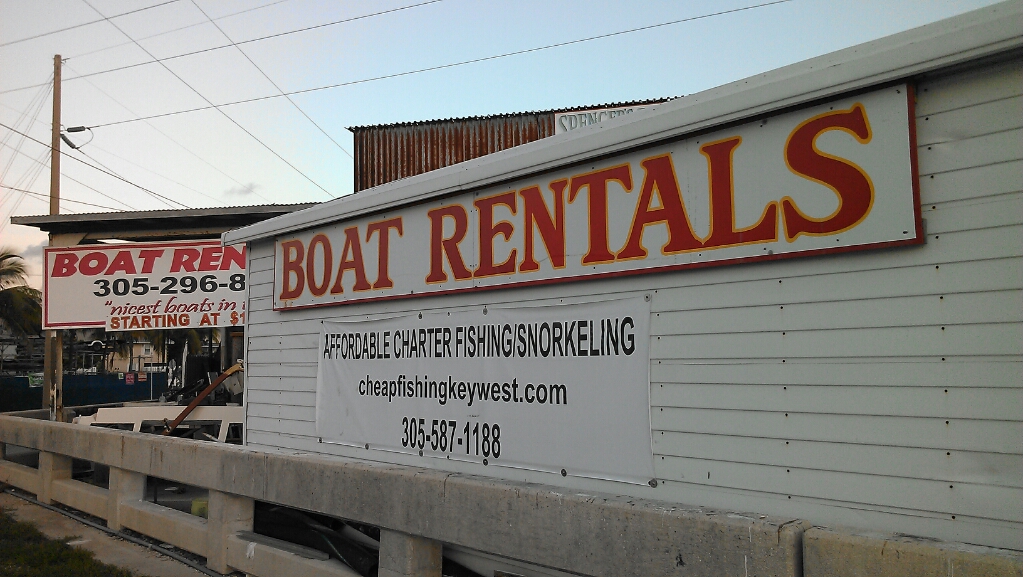 There are some who still hold with the old ways and very pretty they are too, wooden boats: 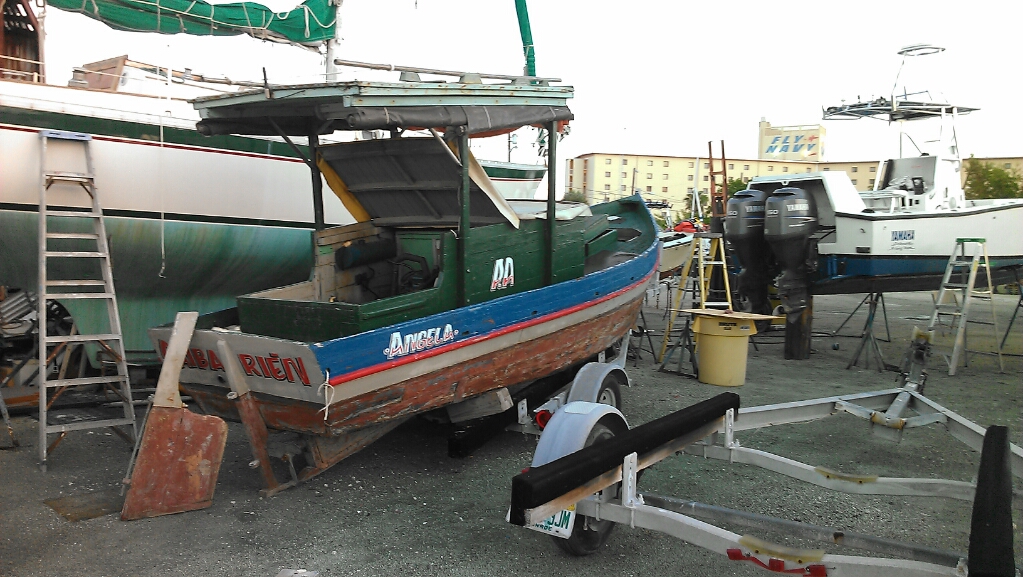 When you have a boat a boat yard is a gruesome place where your boat is out of its element, everything is coated in dust and the noise of hammering drilling and sanding is endless and all you want   is to get the work done, pay your bills and get out of there. But to walk by is to see other people's hopes and dreams and thus get inspiration far from the hard work! 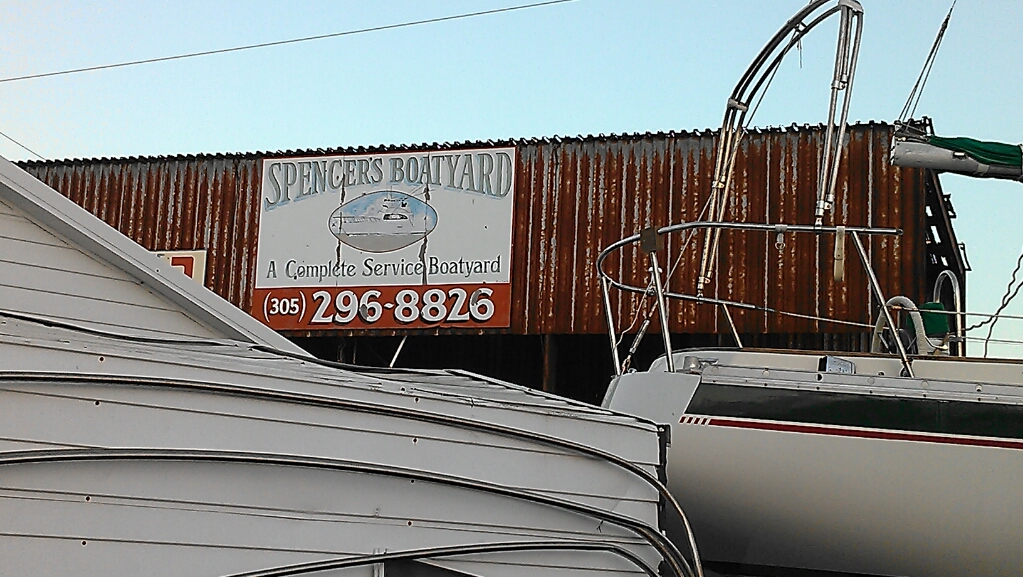 Spencer's is such an anachronism in modern high price Key West (shown below with the red dot). 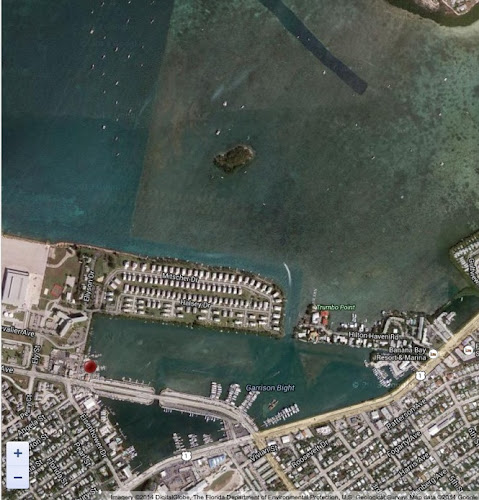 Yet this picture from the 1970s by Dale McDonald in the State Library of Florida Collection, shows this kind of work has been going on for a while at what was Steadman's Yard. I guess thirty years ago they became Spencer's according to their advertising. 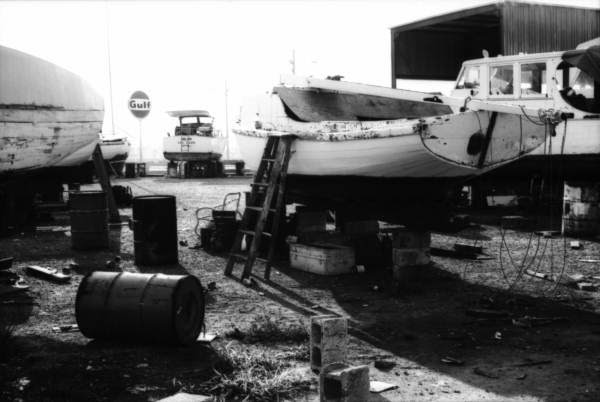 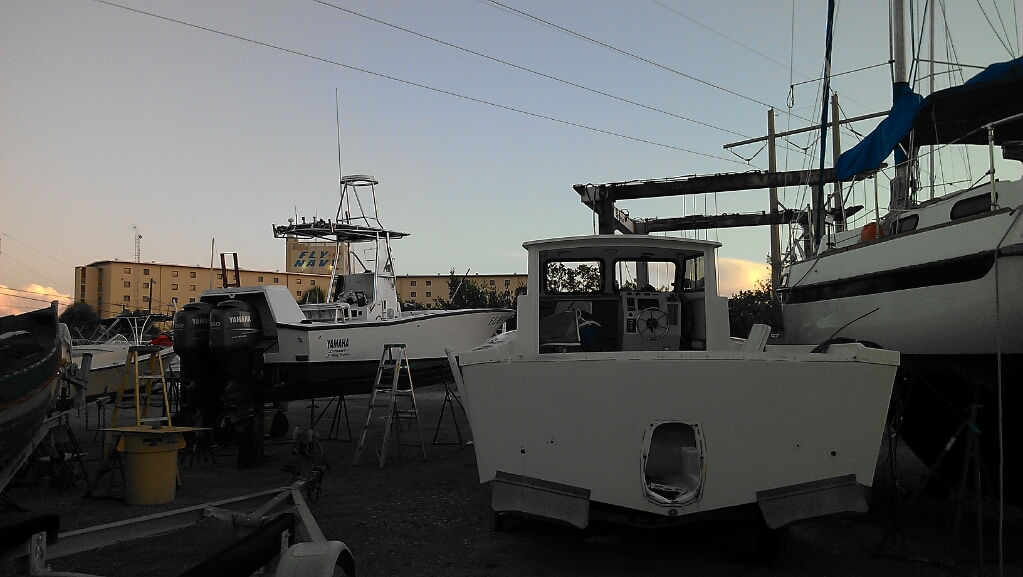 Landlubbers don't quite get it usually, buying the old line that boats take a lot of work, compared to a house. In my experience a reasonably sized fiberglass boat is fairly low maintenance compared to a house. A boat consists of machinery and machines like to be used or they freeze up, especially in a salty environment. But modern boats are amazing with plastic hulls, plastic sails and plastic ropes they are tough and easy to live with. 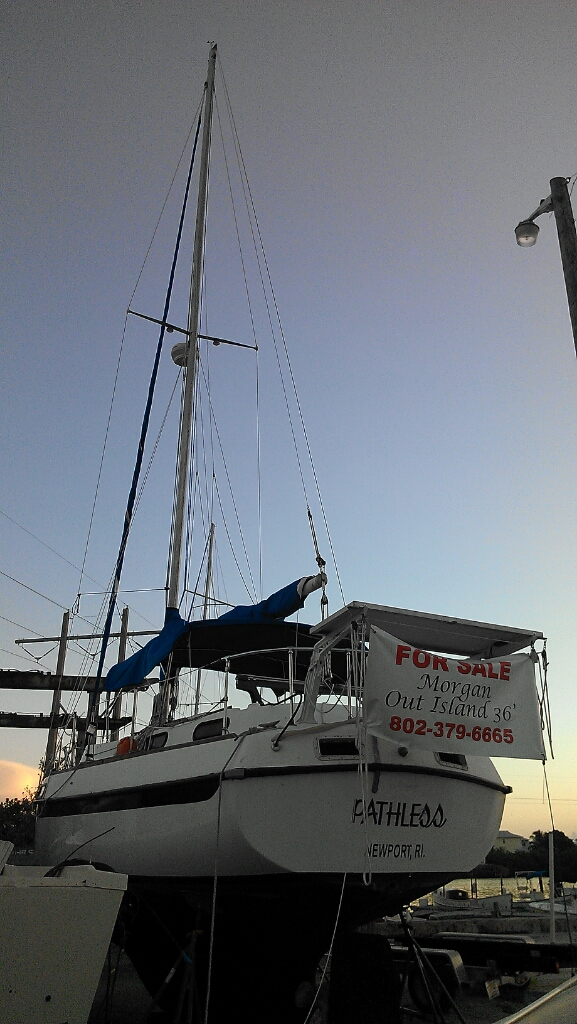 The hard part is the anchor they can represent in your life. A boat is a constant responsibility and even though it should be mobile in a world where planes fly 500 miles in an hour and cars drive 500 miles in a day a sailboat, your home, can only do about  miles an hour and is subject to the vagaries of weather and access to deep water. 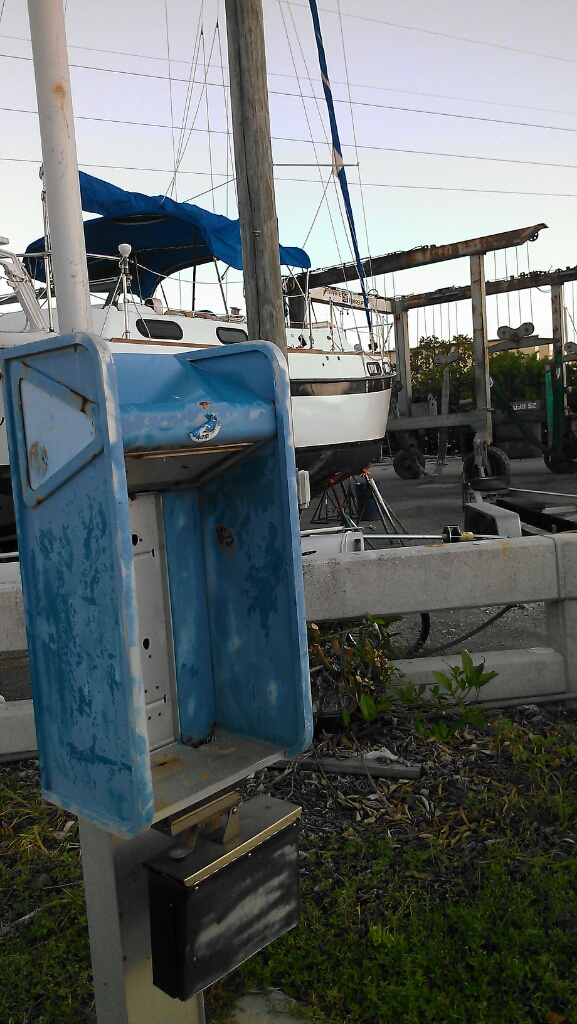 It is much harder to abandon a boat for a while and then come back to it and resume using it as though it were a house. Boats need to be aired out, their systems operated and the best person to do that is the person who owns and cherishes the boat. When you own a boat that is your home your home owns you. And a piece of you belongs to the boatyard. 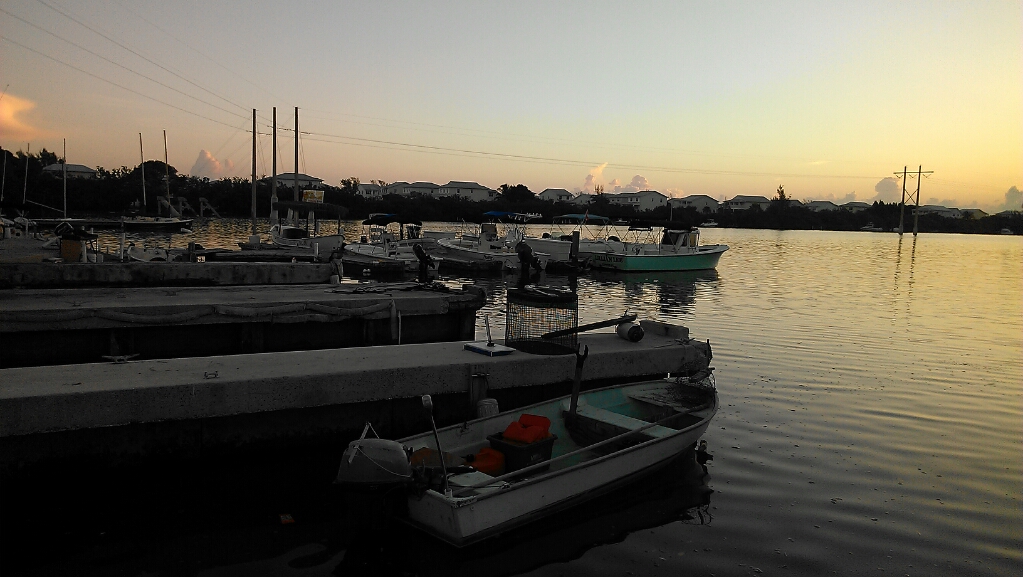 When I lived at anchor near Rat Key ( the island at the top of the map above) I used to tie my dinghy up o this seawall and walk into town across Peary Court. Spencer's charged a dollar to use their dinghy dock, dump your trash and fill a water jug each day but my buddy was an appalling cheapskate and he preferred to live on the edge of society and I was easily swayed to follow suit. Looking back I was an idiot as I could easily afford a dollar a day, plus the wall was awkward to climb over and the dinghies were vulnerable to passersby. Nowadays the seawall is home to a proper home afloat. 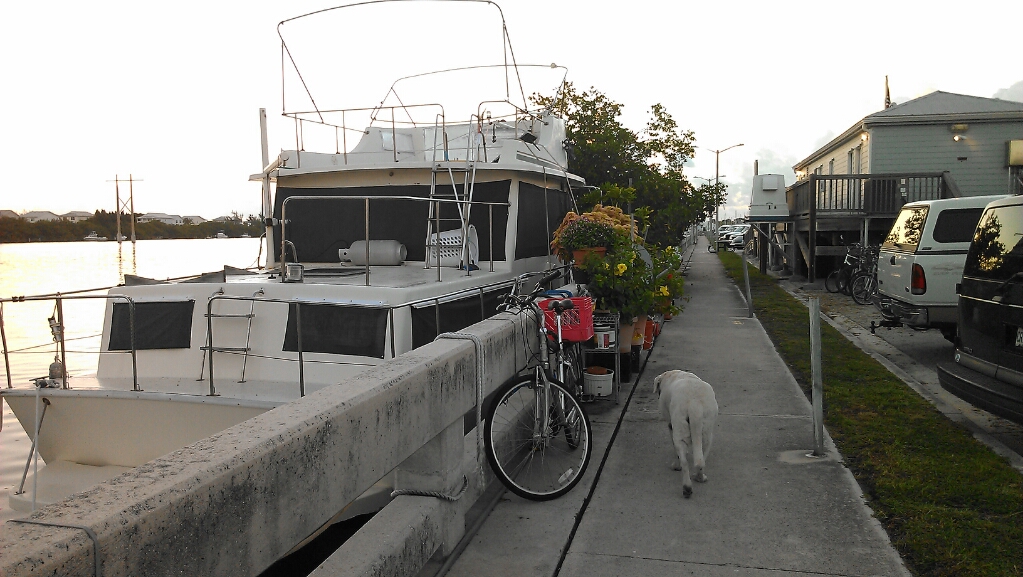 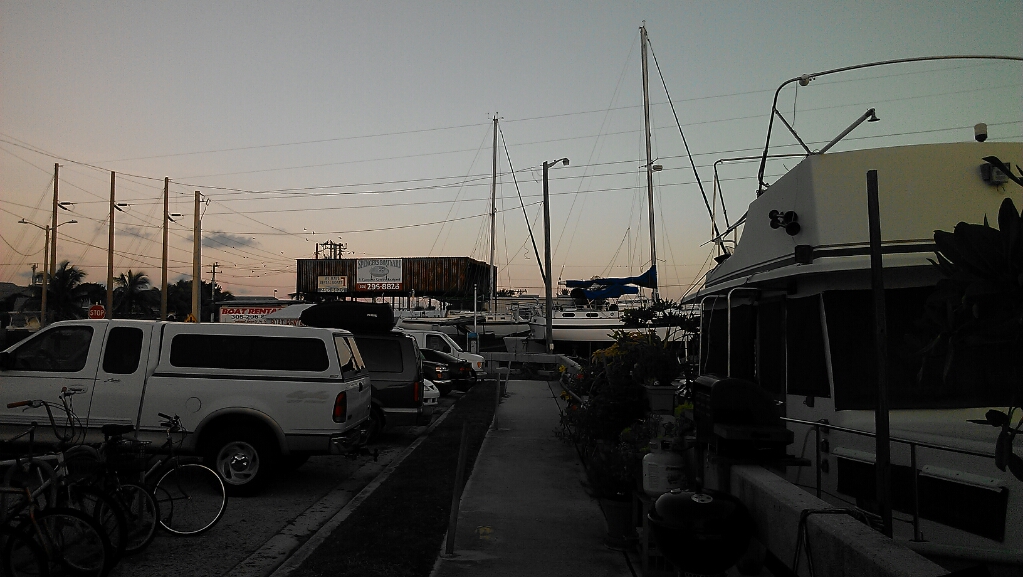 The views aren't all industrial wasteland: 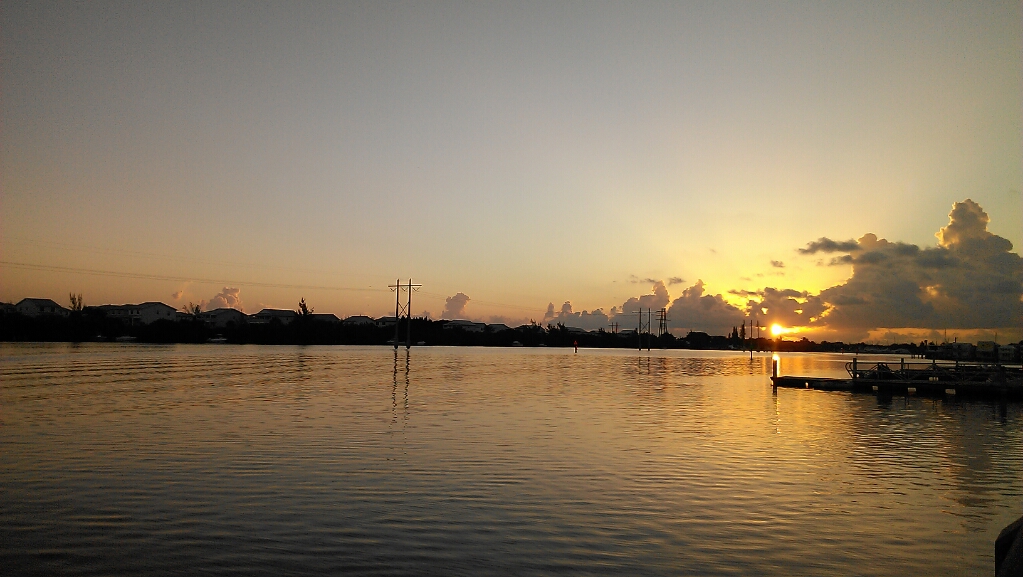 A "bight" in nautical lingo means a  body of water indented into a coastline, as though the water had taken a bite of the land , as it were. Garrison Bight is actually human made as Flagler's railroad built up the land you see at the top of the picture above and ran his rail line across it to the Havana Ferry Terminal at what is now the Coastguard Base. In so doing this body of water became an enclosed pond with one small access to the sea outside, and less of the original bight. The aerial view above from Google Maps illustrates the geography quite well. 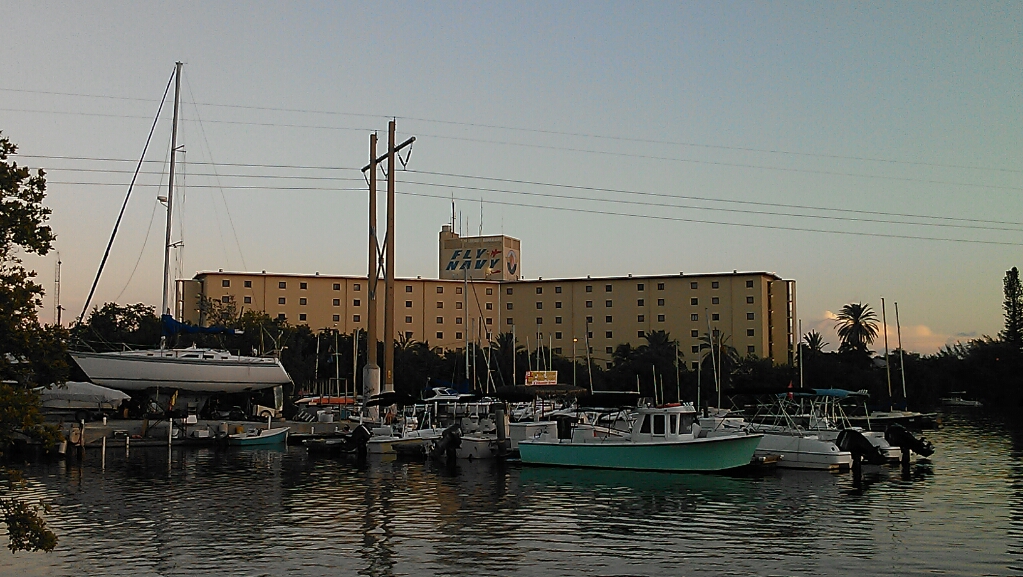 The boatyard lives in the shadow of the so called "Fly Navy" building on the base. It's correct name is Bachelor Officers Quarters as Key West has a dive school and Boca Chica trains a lot of naval aviators and they need somewhere to sleep. 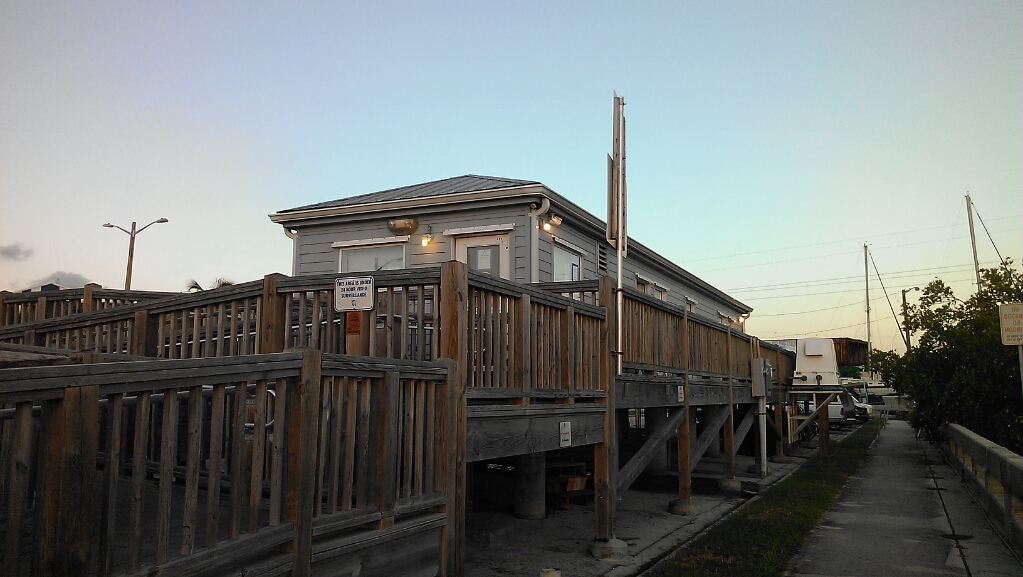 The city also created a mooring field partly visible in the dark water to the left of the aerial view above. To accommodate those boats they also built a floating dinghy dock as seen below, a fifteen minute boat ride by outboard motor. And above we see he new shower block for their use as well. Very civilized, too bad the mooring field is so exposed to the weather, particularly winter north winds. 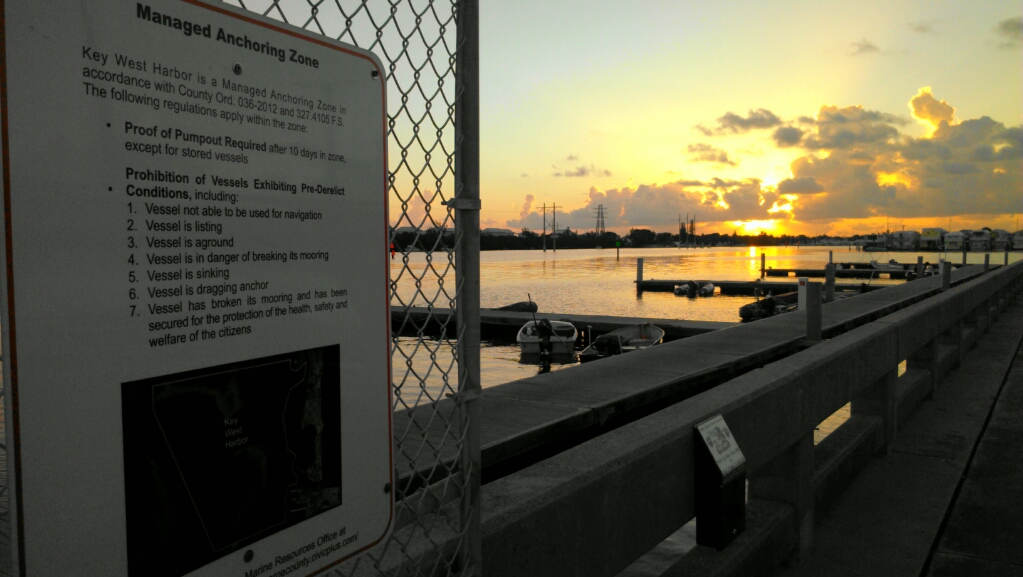 And of course recycling and trash disposal. And spare toilets too, on parade for inspection by my Labrador. 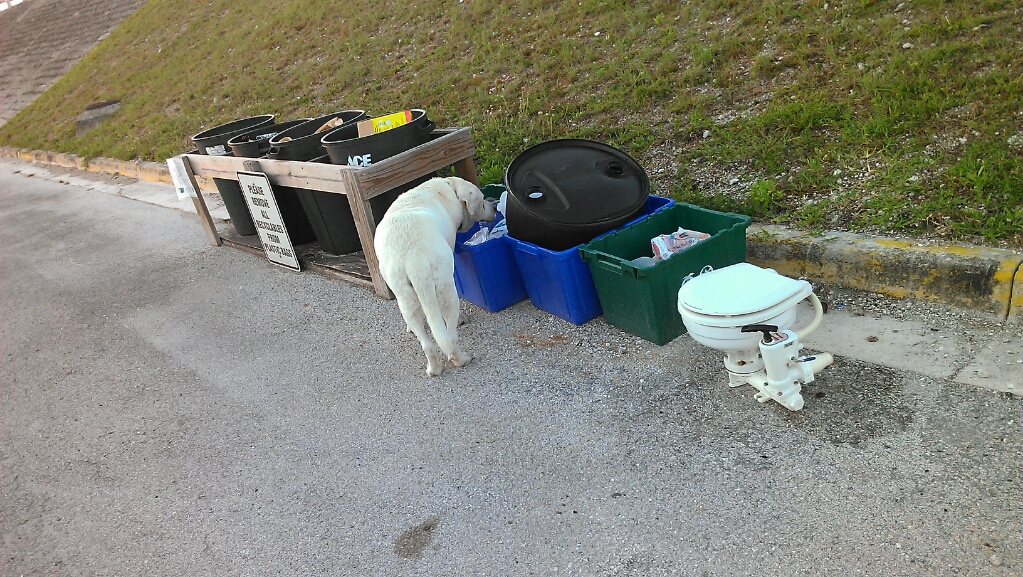 Its a serene spot though inside the Bight as an arriving dinghy carves up the smooth waters. Behind him you can just see the docks of the Sailing Club. 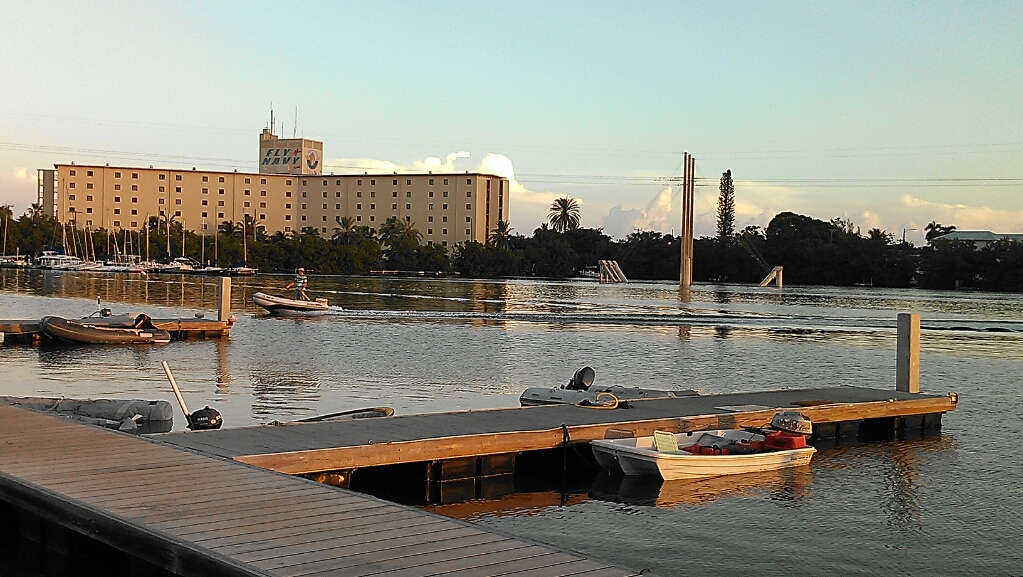 My wife and I used to be members here and we'd dock our dinghy behind the fence and sometimes sit out he rain under the thatched roof of the tiki hut, reading a book (no Kindles back then!) and waiting with the patience endowed to humans by boats. 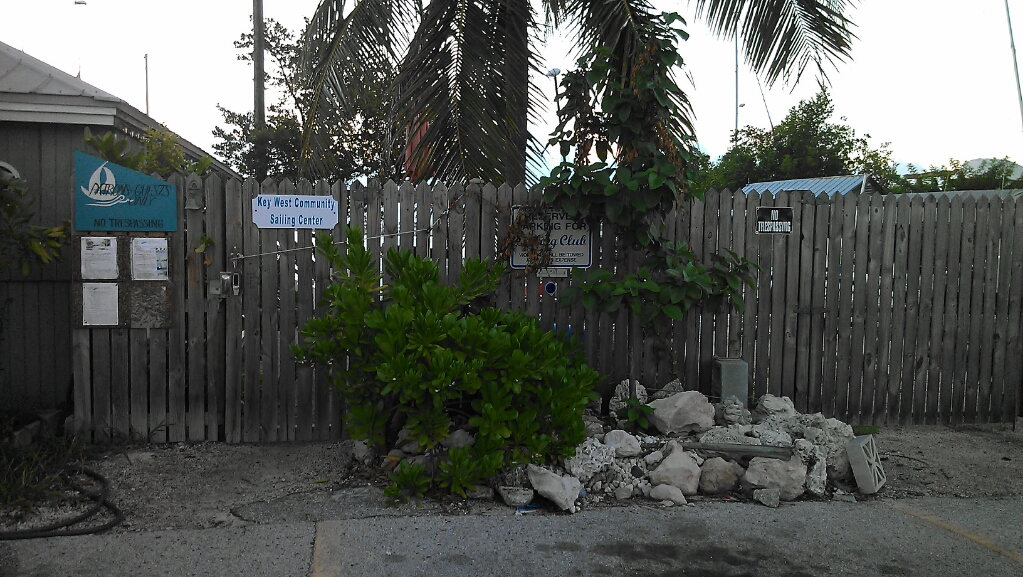 Not all Key West is picturesque, and sometimes the waterfront takes on a slightly industrial look. 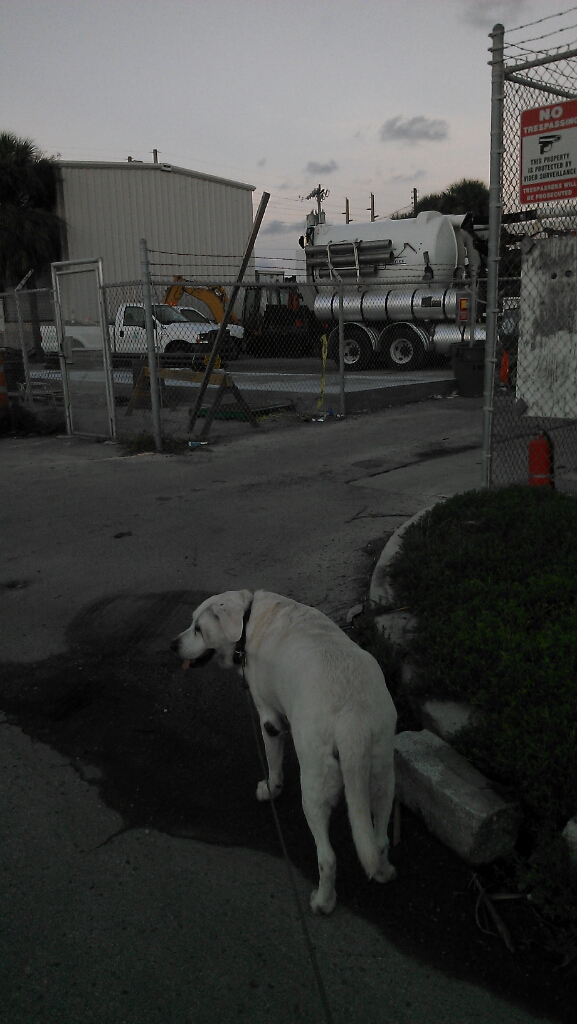 All the better to explore.
Posted by Conchscooter at 12:00 AM No comments: