A Cold Front At Last

It felt as though it was a long time coming but finally we have an official cold front over the Keys. There was a day of high humidity as is usual when cold weather Up North pushes down and drives the colder air into the southern latitudes. 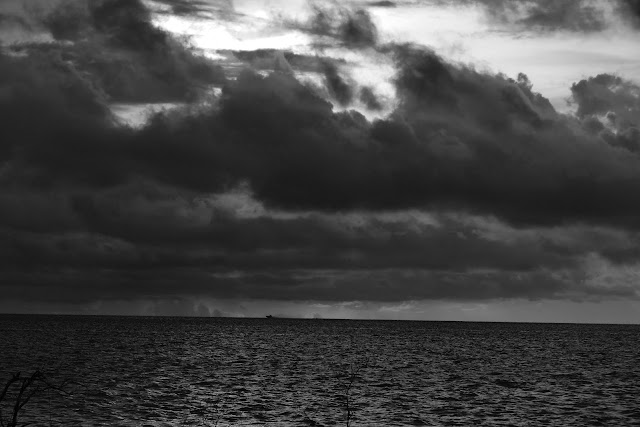 Of course Saturday was my first day off in a while and when Rusty finally rolled me out of bed not only was it daylight but it was also threatening rain as the cold front closed with the islands. 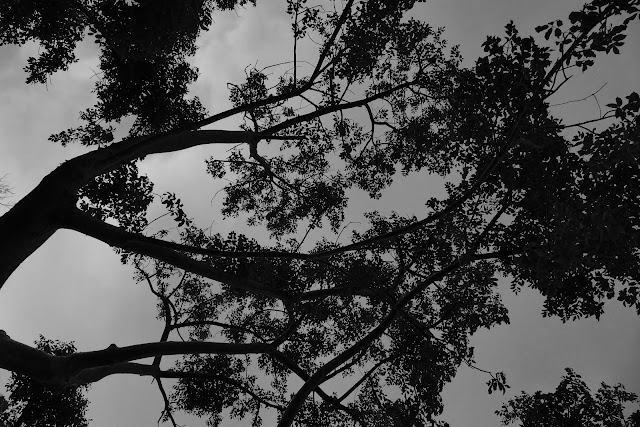 I had planned a city walk in the morning but toward Key West the skies looked black and I could yet see some blue skies over Big Pine to the east of my home on Cudjoe. So I made a last minute executive decision as we drove down Spanish Main and I turned right onto the Highway joining a busy flow of cars. 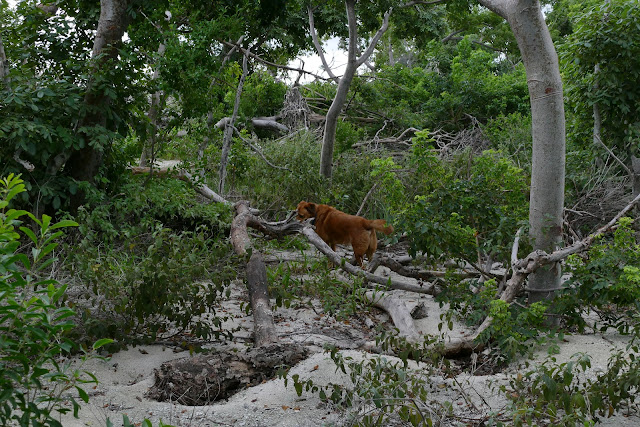 The clouds closed in but I was determined we should have an expansive walk together on my sole day off. Usually I get up at 3:45 and walk Rusty round a neighborhood in the dark on those days when I work so walks in the woods are now limited to my days off. 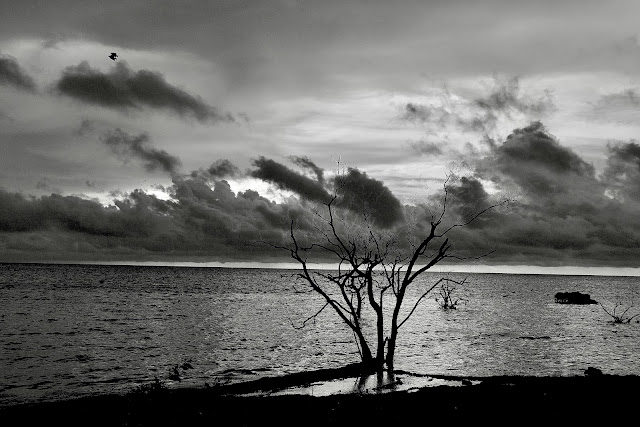 From across the bay I could see rain clouds closing in and clearly we weren't going to escape the usual downpour that precedes the arrival of the cold air. It was just a  matter of timing and rusty was no help at all in figuring out our turn around time. 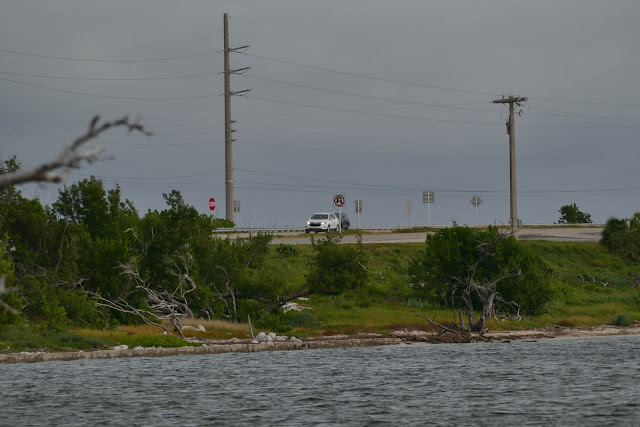 I was in no hurry, I had a plastic bag to put over the camera and my umbrella was secure in the car so I was ready for any eventuality, eventually. 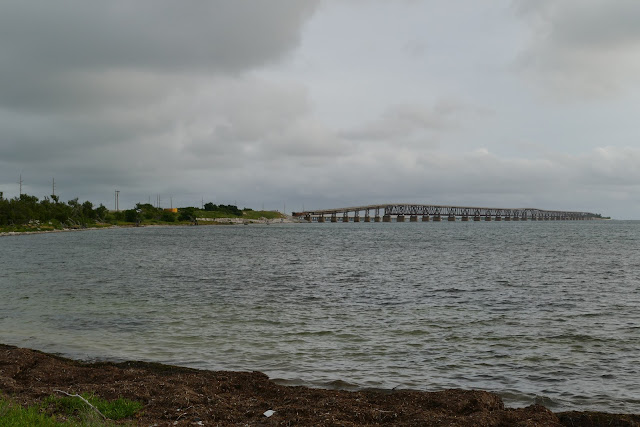 At last Rusty decided there was nothing left to see in iguanaland and i had taken advantage of whatever photographs came to mind though when you walk a  dog with a camera photography can be rather on the fly with little time for pondering. 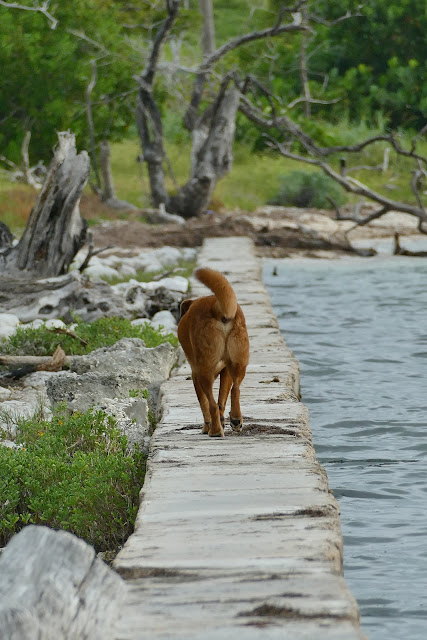 It is the time of year and instead of my car being all alone in the parking lot there was a line of vehicles for me to choose among. Solitude will be hard to find for the next eight months. And indeed judging by the drop on the lense the rain had started already. 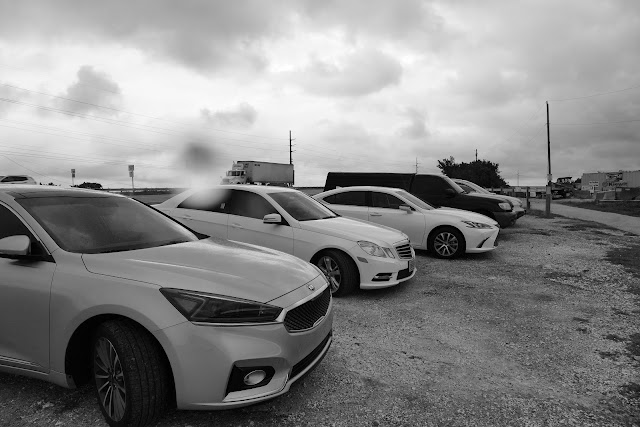 We started to drive away but because I am an optimist and because the rain eased up after an initial flurry I stopped for a moment at Horseshoe Cove to feel the north wind which can be bracing in these conditions. Instead I found the bay waters pushed high up on the beach submerging the whole area. 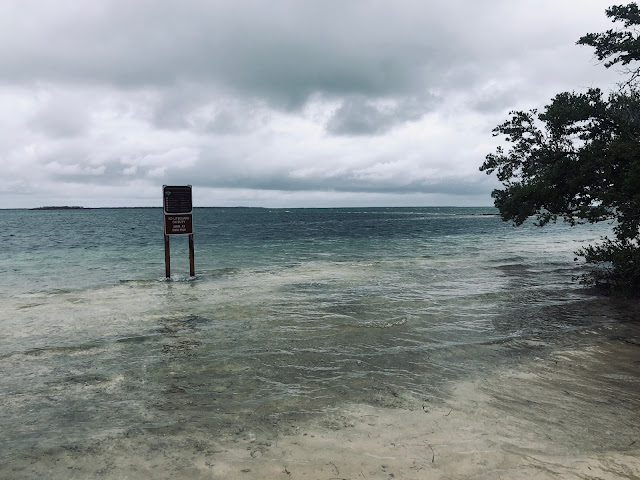 The good news now that I am back at work is that cold fronts, even mild ones are usually followed by a period of cool breezes and bright sunshine. It's not terribly cool but daytime temperatures have dropped briefly below 80 degrees so that doesn't feel too bad at all. The next cold front will one hopes be cooler and perhaps stronger.
Posted by Conchscooter at 12:00 AM 6 comments: