My Vespa At Last

It arrived yesterday and that was a saga which I shall write about later, but here it is all twelve horsepower of bubbling two stroke two hundred cc raw power. Actually I'm running in a new barrel and piston so I am supposed to take it easy for a while according to Dave at Green Tree Scooters in Mason City Iowa. 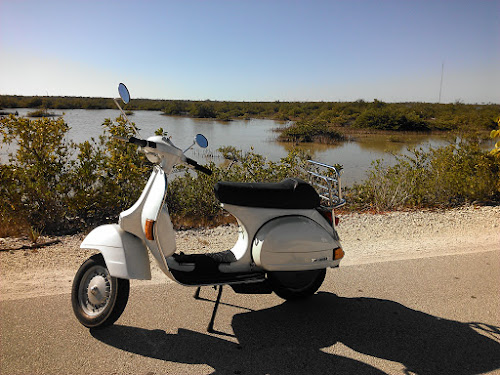 It still has the Iowa tag that Jeremy should have taken so I will have to mail it back to him but it's a messy job changing the license plate to my new Florida Antique for this 33 year old piece of motorized technology. I have put five kilometers on the metric speedometer (3 miles) on a quick ride round Ramrod Key keeping off the highway to avoid legal encounters. It spent six weeks getting here on the cheap slow delivery plan and when I finally got it to fire with some over the phone coaching from Iowa it blew blue smoke all over the place like a mosquito control Vespa.

I am starting to think I may enjoy this 1979 Vespa just a little bit, though how I rode one just like it cross country in 1981 I cannot for the life of me say, anymore. Technology has moved on a great deal in the intervening years compared to my wife's smooth four stroke 150cc Vespa built in distant 2004. I am guessing they should have similar performance, 60mph top speed and around here that's enough to keep up with highway traffic. 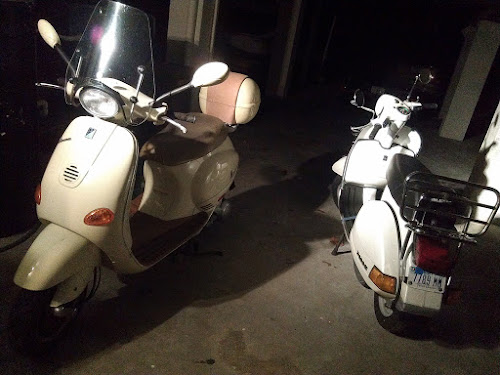 But if I want smooth modern technology I have my Bonneville which should be coming out its mechanical, valve adjustment coma sometime soon. Suddenly, an abundance of two wheeled technology in my life. Cool!

Posted with Blogsy
Posted by Conchscooter at 8:38 PM 8 comments:

I have long since held a fascination with Alaskan blogs not because I want to live there but because I never would want to live there. I deed I have little desire to visit a place where mosquitoes are huge and distances are vast and roads are long and straight. Oh, wait a minute, that sounds a bit like Flatistan... 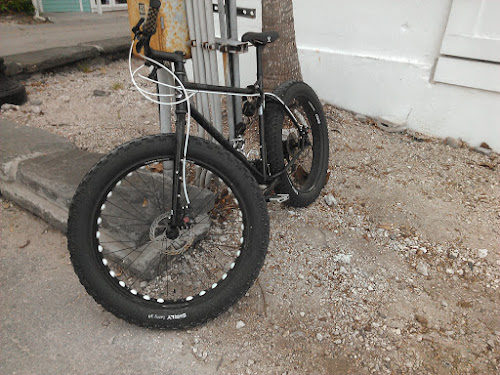 The bicycle seen above reminded me of a blog from Juneau where a tortured young woman used to live and ride a "Pugsley" bicycle. From her words I had no idea the tires were so huge, but they are. Their purpose on this sand free, snow free lump of rock seems questionable but it was certainly fascinating to see in the flesh. Cheyenne's sense of curiosity extends not much further than the gutter. This rooster tried to bait her, but without success. Cheyenne respects all forms of life, ignoring other dogs, deer and chickens. Unfortunately she also ignores iguana which gives them free rein to eat my plants. 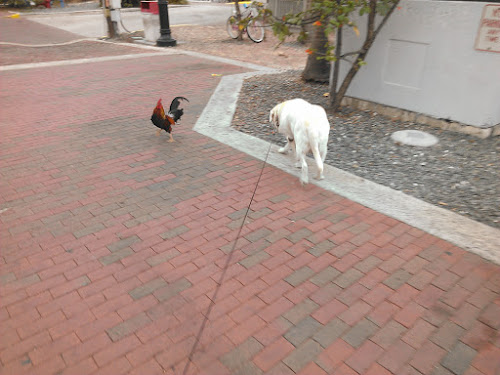 I liked this planter using a huge truck, one of those machines that clog the streets, to hold ornamental plants. Just as on the roadway the large body does tend to block the view. Nice idea for a planter but in the end poor execution will doom this style. 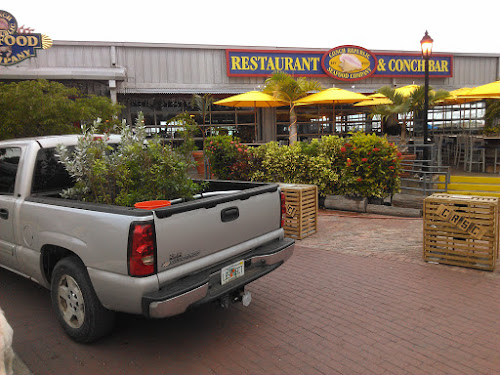 The Conch Republic Seafood company is also,known as "The Conch Farm" owing to the original agreement when the city leased the waterfront for the restaurant. Conch have been fished out in the Keys, the slow moving molluscs don't stand much of a chance against fast moving divers. Nowadays they are protected and are making a slow comeback in Federally protected waters (don't you hate those government regulations?) so the city tried to help by creating a space here to grow Conch for reseeding into coastal waters. These days any conch ('konk') you eat. Comes from somewhere else, Honduras I believe, as Bahamian conch are on their last legs too. Frankly I have no clue why anyone needs to eat these flavor free slimy slugs. But they are fashionable to their own detriment. 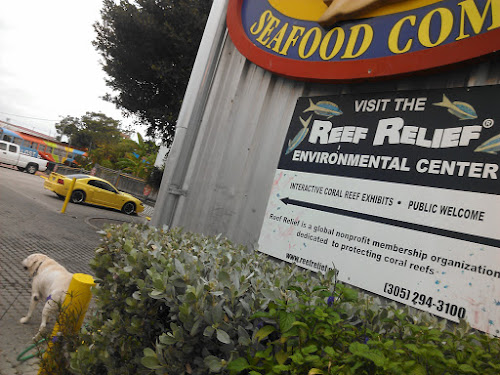 This is the week when I avoid eating out because it's Race Week and sailors are in town strutting around as though moving a fiberglass boat through water also eerie an achievement. Their trailers are parked on Caroline Street but race in the harbor as part of the Southern Ocean Racing Conference. The boat owners need wealth to keep their boats competitive though some Corinthians (amateurs) race for the fun of it. The wealthy owners buy youth with strength and talent and put them up as the travel and feed them in loca restaurants. These are not youngsters who care one whit about the towns they visit or the people who live in them. I stay out of their way. 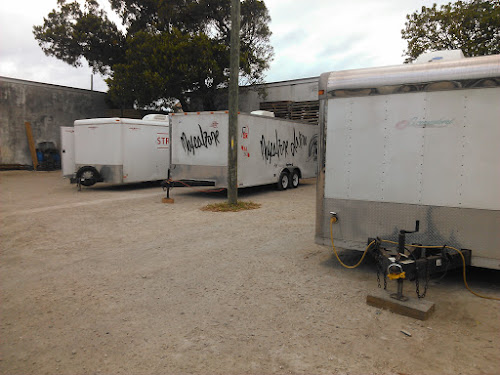 I was interested to see this Italian team was in town roughly translated as "Latin Rascal" where Latin refers to Rome, not Spanish speaking America. They were the challenger of record in the next round of the America's Cup hoping to take the much over hyped trophy from San Francisco Bay to Italy but they seem to have dropped out claiming poverty. Another reason to despise Goldman Sachs! 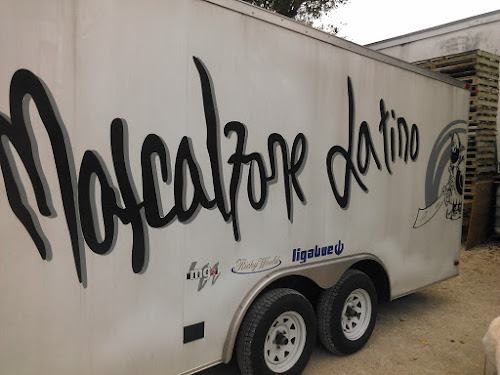 Even the wealth of the owner of Mascalzone Latino needs support and it used to be Acura that inflicted this modern piracy on Key West though nowadays it is sponsored by Quantum Sails which is at least a company devoted to making the sails that power these boats. 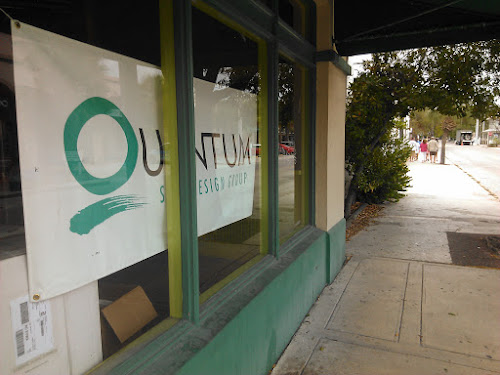 Race Week is another of those annual migrations that bring visitors and money to the city, just as the forthcoming food and wine festival will do the same, encouraging people to stand around and balance paper plates and wine glasses and taste food from various local eateries. Key West has, for a city lacking a convention center oddly enough, figured how to encourage people to come south for the most spurious f reasons. 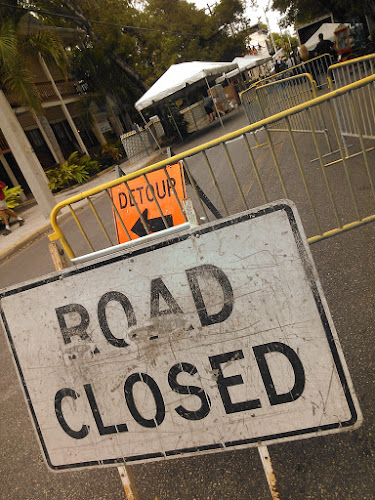 These 'road closed' signs get lots of use in Key West and in this case they are closing Caroline Street at Whitehead to allow racing sailors to gather and let off steam. I'm not sure why the trees were removed, but they are gone, at least for now. 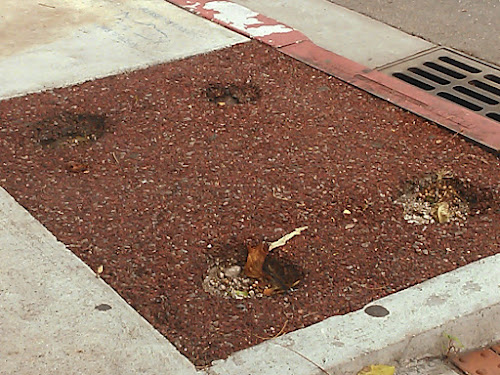 Long after the little fiberglass sailboats will be gone for another year the big old boats will still be trundling into town. They keep bringing day trippers in their thousands to the acclaim of those who make money off this lot and to the aspersions of those who don't. Business as usual in the Southernmost City. 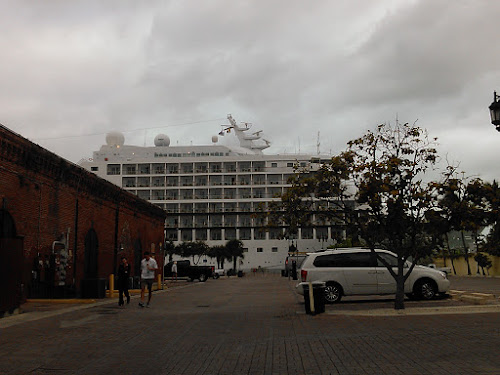 At the end of the day the solace lies in the constant flow of money into the city. Crass but true.