I picked up my copy of the Key West Citizen out of my driveway yesterday morning and saw this story splattered across the front page: Some Cuban refugees managed to land on an unoccupied light house on the reef and were being held in a Coast Guard ship while the courts decide their fate. Rubbish I thought to myself, the Conch Republic long since settled this issue. Let me explain. 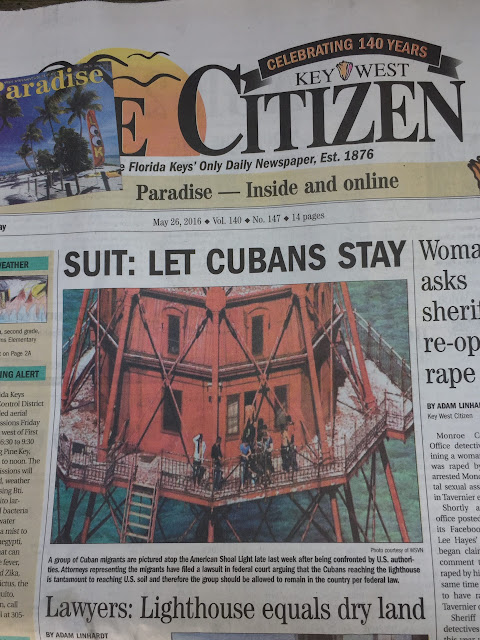 The following pictures are screenshots from my phone so you can find out all you want on Bing or Google if you know where to look. Ten years ago a group of Cubans landed on an old pillar from a Flagler Bridge as described in Wikipedia (see below) and when the courts ruled they hadn't set foot properly on US soil the intrepid Secretary General of the Conch Republic landed on the unclaimed rock and declared it was part of the sovereignty of the Conch Republic, a sovereign state of mind. This act embarrassed the US and after the Cubans were returned to Cuba the courts ruled that of course the column in the water was  actually part of the US and they should have been allowed to stay. 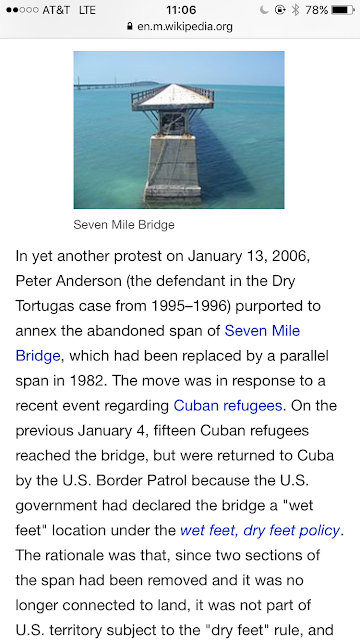 Cubans get special treatment when they come to the US, and they are coming in droves now they fear the special treatment may soon come to an end. If they propel themselves and don't pay smugglers and if they manage to land on ground. not necessarily dry, but just so long as they can stand without drowning they get to stay in the US. So now the question is whether or not landing on a lighthouse structure built over the reef, anchored by steel screws into the submerged rocks, constitutes a dry foot landing for the Cubans as required by US law. 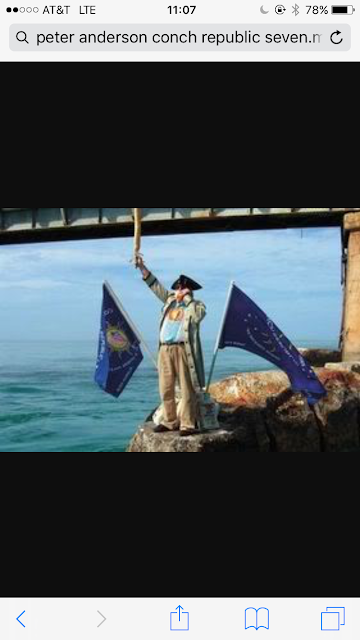 I know what the late Peter Anderson, photographed above on the infamous lump of rock, would say if he saw that lawyers were arguing the point. He'd be in a boat with a Conch Republic flag, sallying forth to claim the lighthouse for his sovereign state of mind. Unfortunately he's no longer with us so his peculiar form of cheerful persuasion is no longer available to nudge the US Government into doing the right thing. However his legacy has already proved the point: extraneous lumps and pieces of construction material are part of the US so I don't suppose the ruling on the latest bunch of Cubans will be too long in coming and I have no doubt they will be allowed to stay. The Conch Republic has already proved that point. 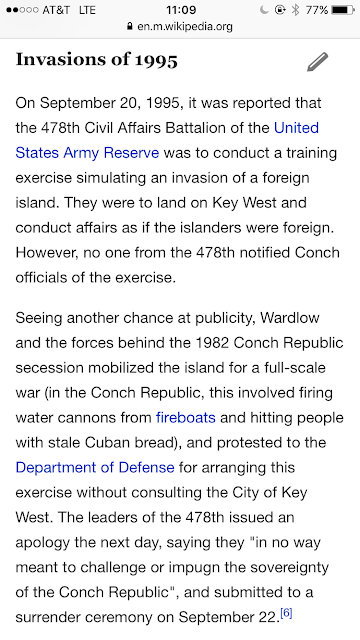 It was a life lived well, a master of promotion who made a living and had great fun celebrating the Conch Republic. I don't suppose the new Cuban arrivals will ever be told they owe it to this man: 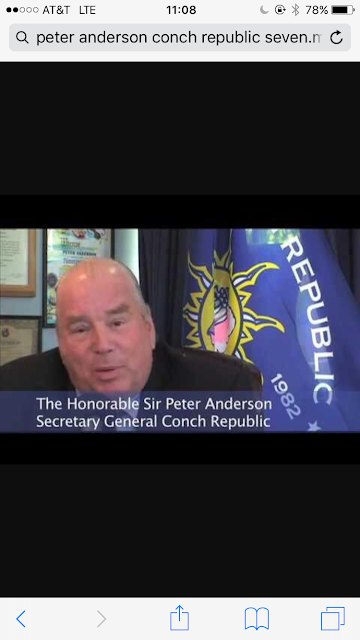 In a side note every time there is a new landing of Cubans from home made boats they managed to steer across the Straits there is a spate of nasty comments in Facebook, that ultimate arbiter of public taste, wherein people moan endlessly about Cubans coming to live her for the benefits and the modest re-settlement fee ($8,000 at last count). I find those comments repugnant, not least because these are people who would never have the gits to cross the Gulf Stream in the wrecks these ingenious Cubans put together, many of whom disappear without a trace. I don't think these Cuban refugees are afraid of hard work if they can make that kind of effort to get here and those comments are unworthy of people safely ensconced in the comfort of life here. I don't think the wet foot/dry foot policy is sensible or fair, especially considering Haitians don't get the same consideration, and it is an outdated policy supported by the Cuban old timers in Miami, but it's there and it's the law and being cruel to the people who come here to live her and prosper reflects no good on the people who make the negative comments.