Hands up anyone in the class who knew tea is grown, commercially and successfully in the Untied States? Anyone? So let me just say I did my best to follow along as we got our tour at the Great Mississippi Tea Company but the details in the two hour talk got a bit fuzzy. I love tea but apparently I know very little of how it's made. I know more now and I shall pass ones many details as accurately as I can, but bear with me. 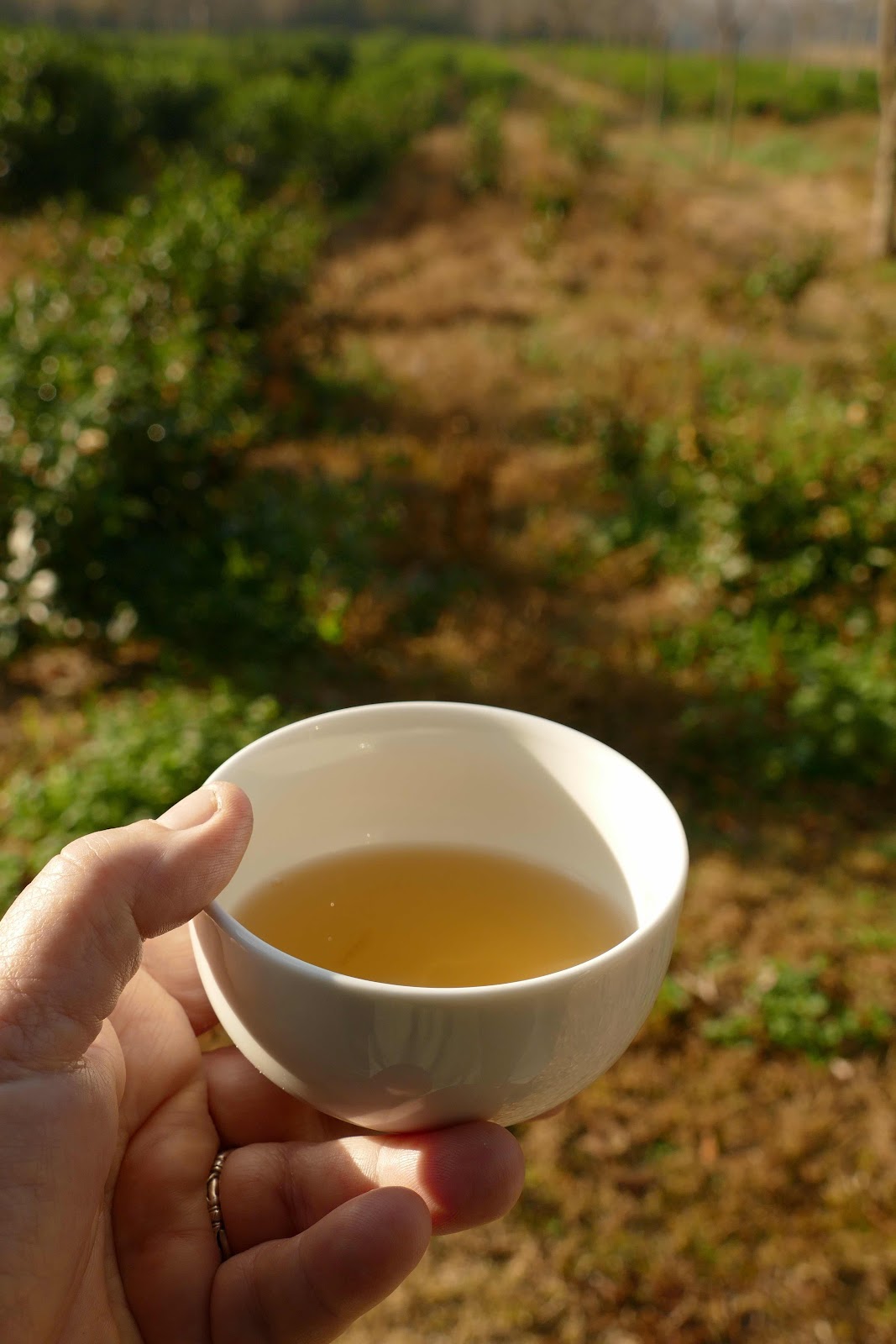 Layne found the Harvest Host stop in the middle of nowhere Tennessee, more precisely Brookhaven somewhere northwest of Hattiesburg. She was dead keen to spend the night there. and I was ready to indulge her whim. I thought it was a retail and blending store and wasn't I surprised when we rolled up on a tea plantation of seven acres of bushes, actual tea plants. 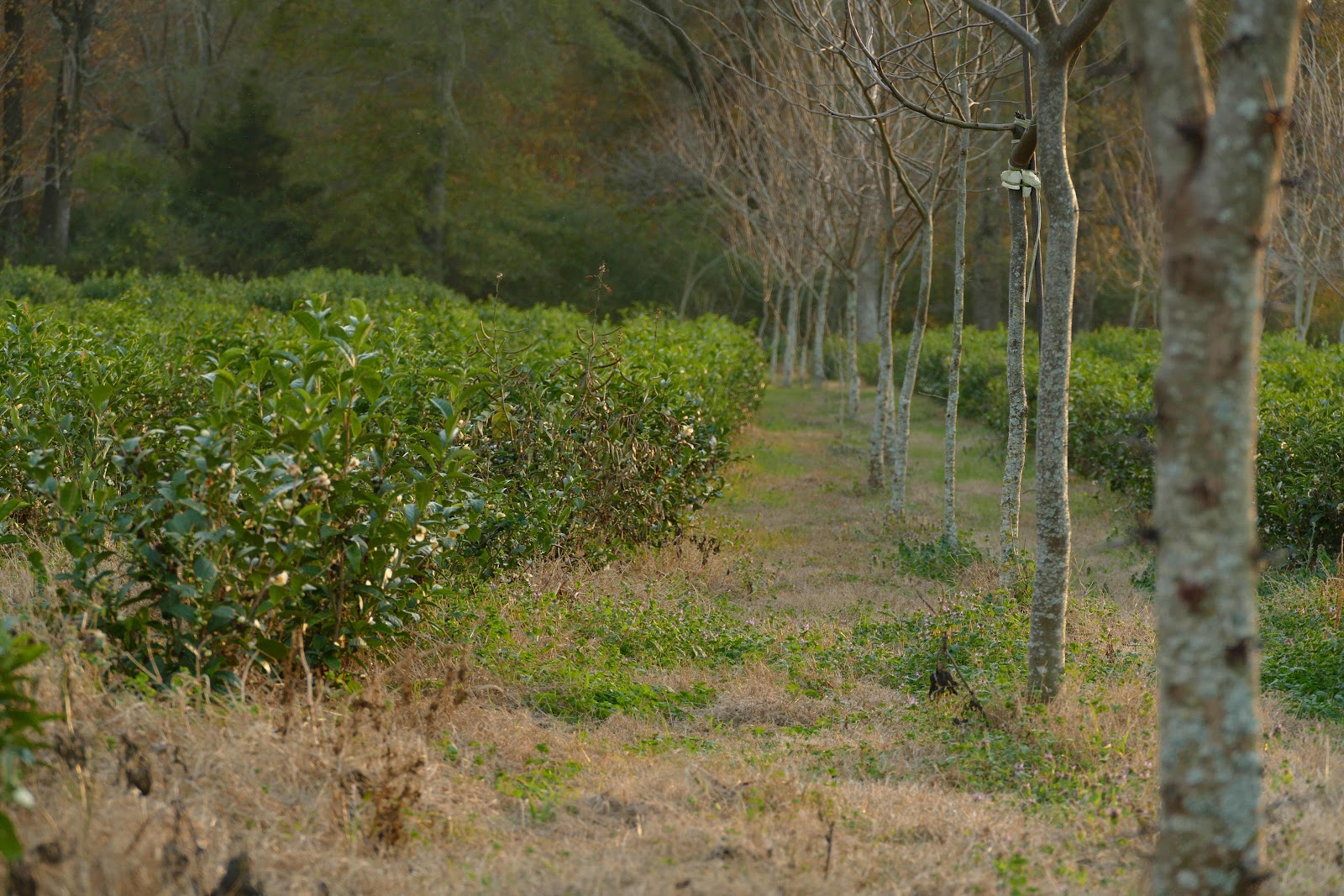 The host, Timmy, was very casual about Rusty who I discovered absolutely loves exploring rows and rows of tea bushes. He was happy as a clam. We were the second RV over fighting and a tour was about to start with the first couple which we enthusiastically joined. Off we went... 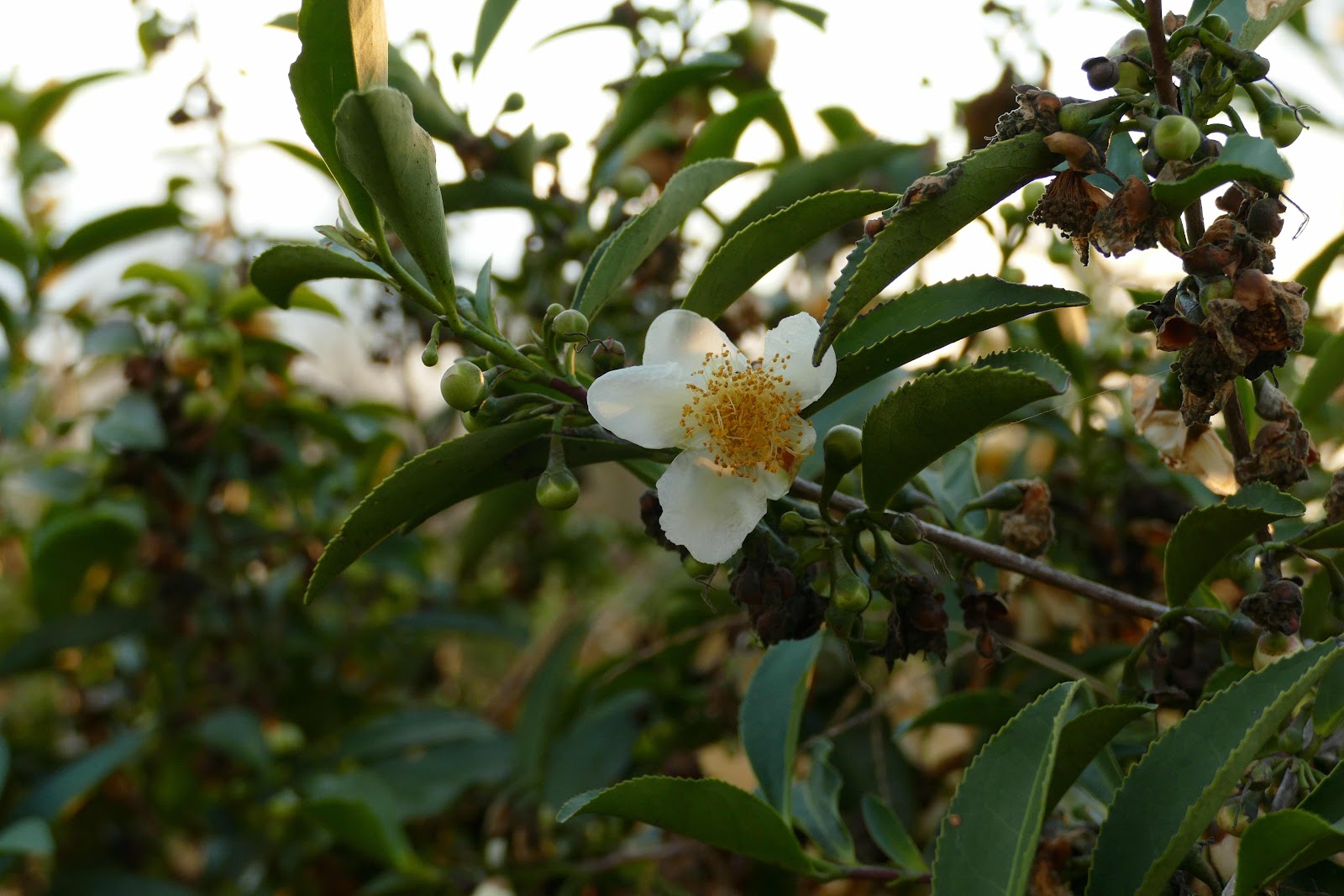 Apparently Thomas Lipton, the Englishman famous for tea sales in the US did actually grow tea in several southern states and the problem wasn't the growing. It turned out the tea couldn't be harvested and processed at competitive rates, and you'll soon understand why. Tea is grown where it's grown because it is -in short- cheap to do so. Fact number one I learned! 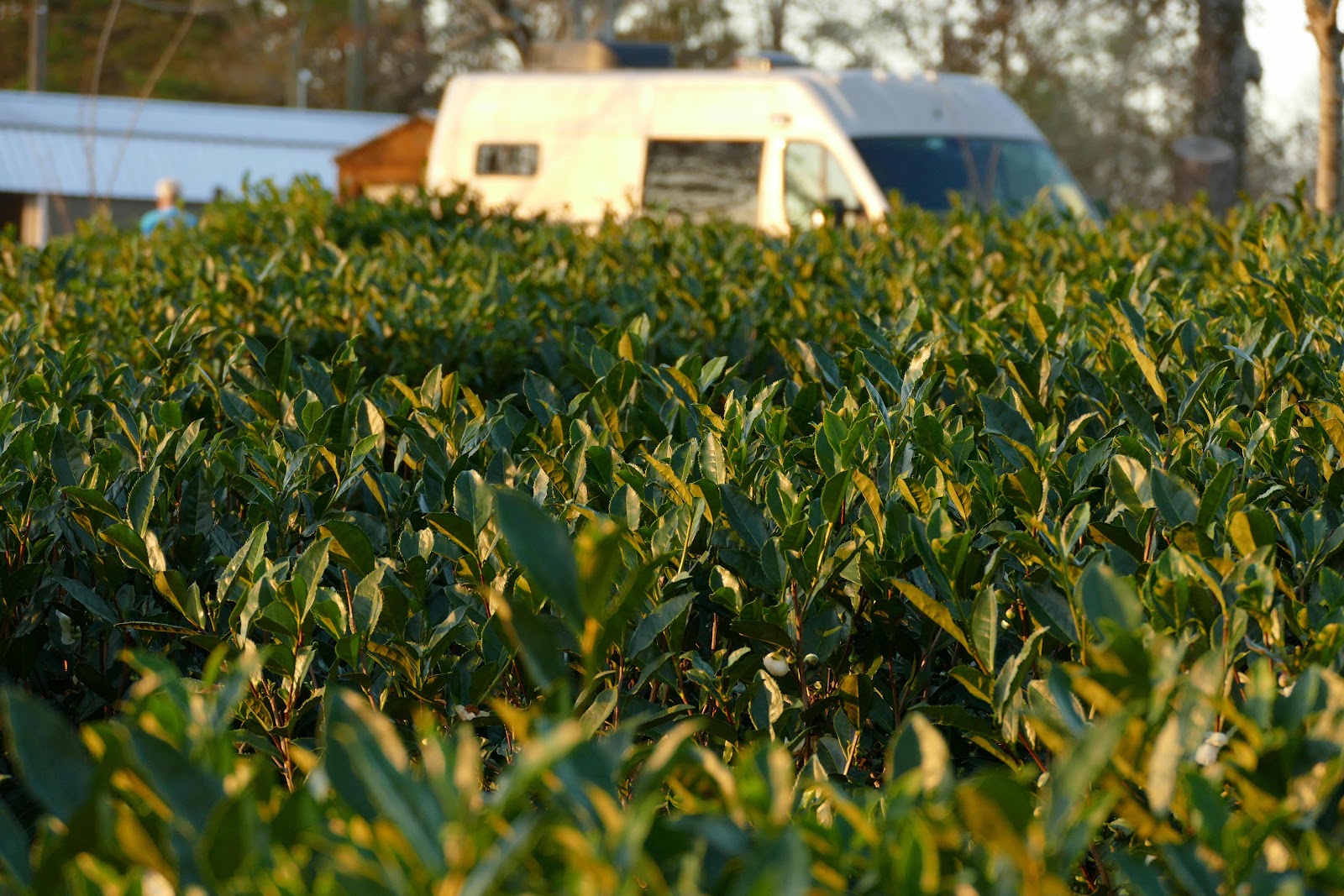 Timmy loves his job and he explains it very well. Fact #2: tea is the most complex plant in the world and once you get the seedling of cutting into its third year it is pretty much unstoppable and will grow no matter what. They do have drip irrigation on their seven acres but tea plants are strong. 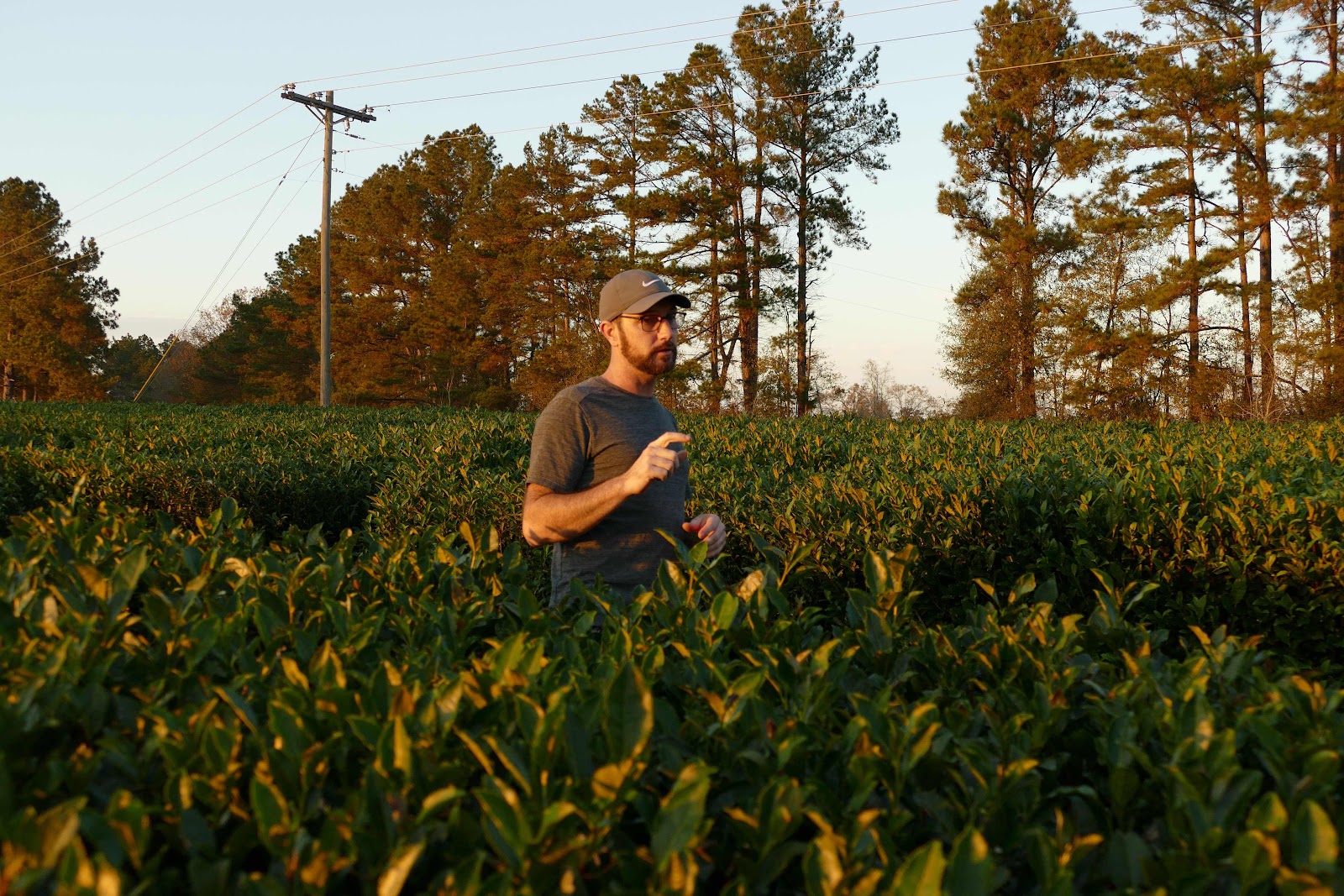 Timmy and his partner Jason inherited 300 acres of land from their grandparents who raised dairy cattle here. They didn't want to raise cattle so they wondered what they might grow, and for some reason they settled on tea which takes years to mature and produce and no one else around grows the stuff. Timmy did say, Fact #3 there is commercial tea grower of some size in every state in the union. Their operation is the second largest in the country and I can't remember who is bigger. No familiar name at any rate. 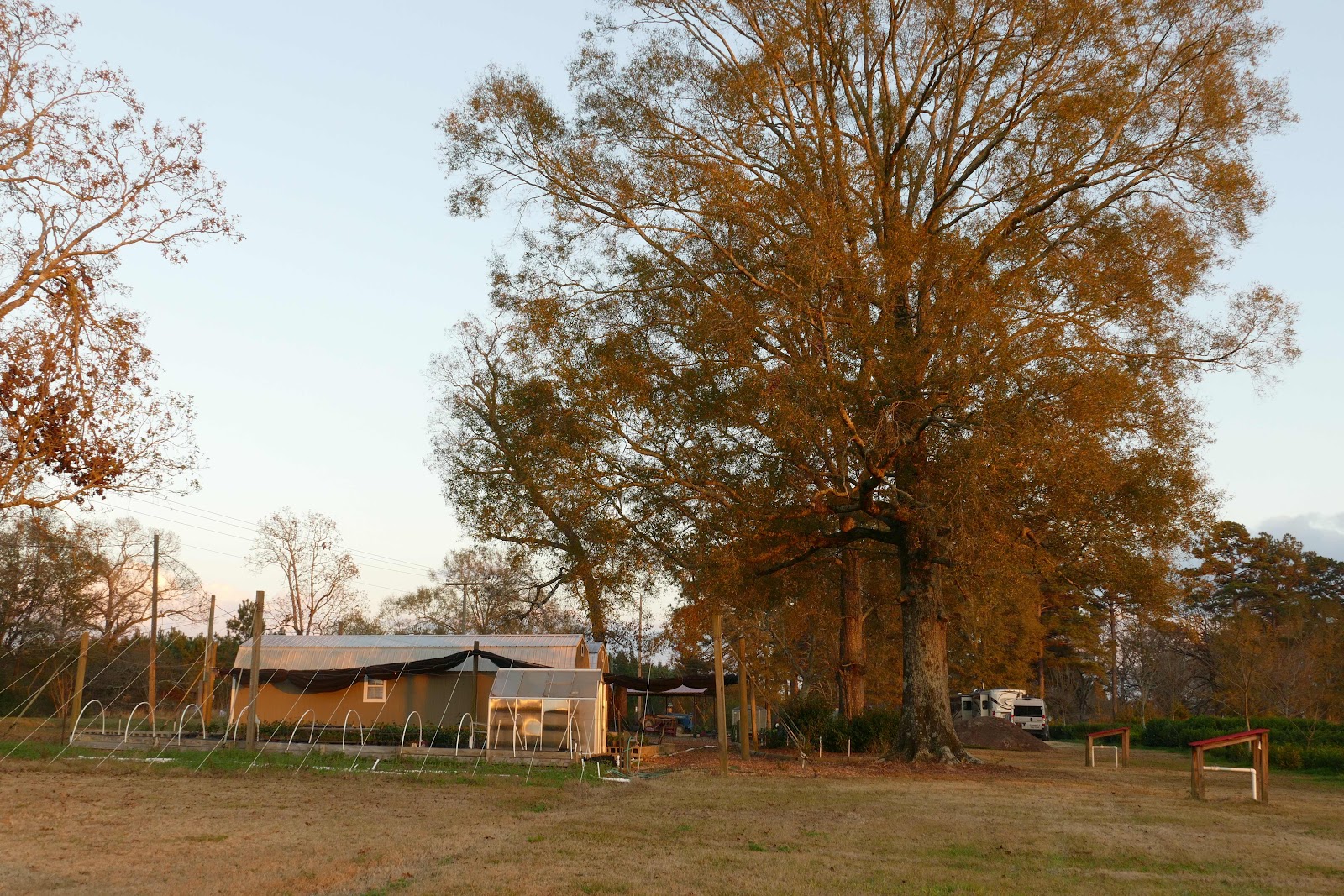 They sold the cows and all but 36 acres and settled down to grow tea. Their planting and seed growing operation is what you see above, and it ain't much. But what you need to keep in mind is they are expanding, hiring (if they can find anyone who wants to learn tea production) and are even exporting. Before Covid they tell me Fortnum's and Mason's in London sold their tea. That is a well known shop so these guys aren't messing around. Fact #4 : Mississippi tea in a high end London emporium. Their first year they produced ten pounds of tea several years after they started planting cuttings in 2012. The planned production rate is a ton of tea per acre and they have seven acres growing into maturity now. 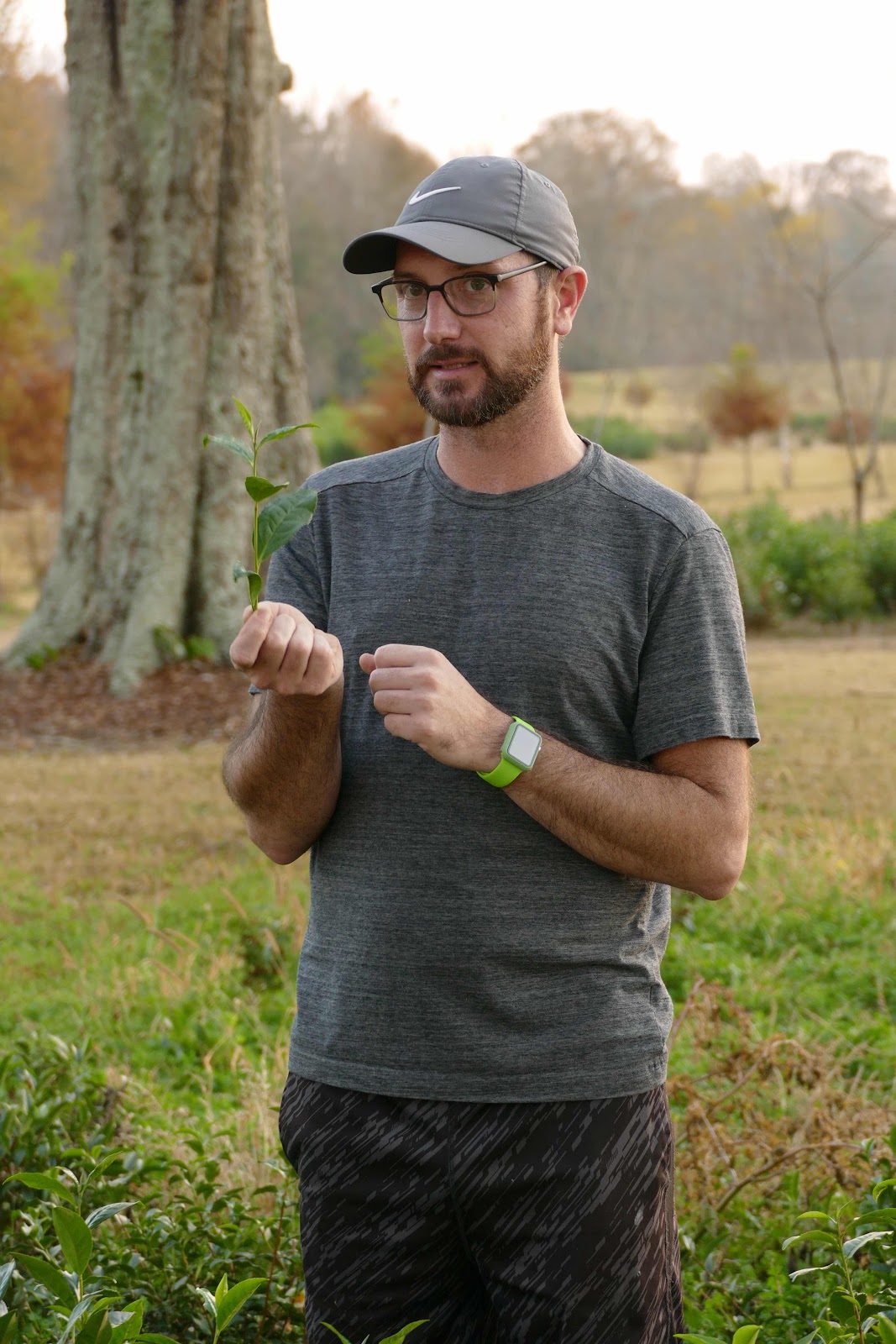 They sell black, green and yellow tea, which last no one has ever heard of as only in China (and now Mississippi) is yellow tea produced and sold. Fact # 5 all teas come from the same leaves, as the flavor and style is in the processing. Timmy stripped a tea plant showing which leaves are used for which color tea. Only Oolong uses the whole stem. He described it as their most floral tasting tea. By now I was gasping for a cup, like a chocolate addict in a chocolate factory. 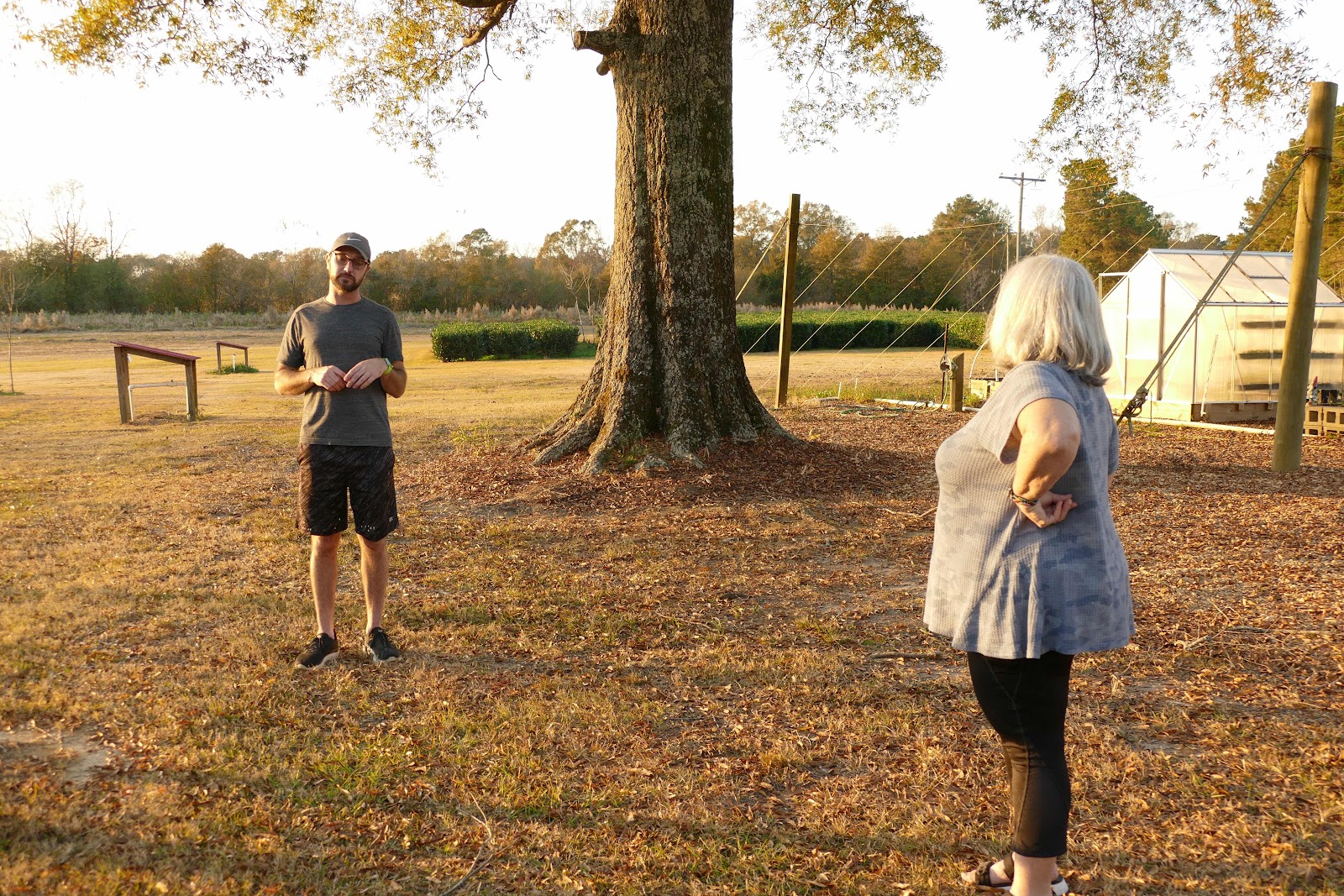 Incidentally the weather was perfect yesterday, sunny and 75 degrees, shirt sleeves even after dark and no sweating. Eventually a ground fog came up after dinner and Rusty came into the van and went to sleep as we closed the door on the night sounds and stayed quite comfortable with no heating or cooling required. 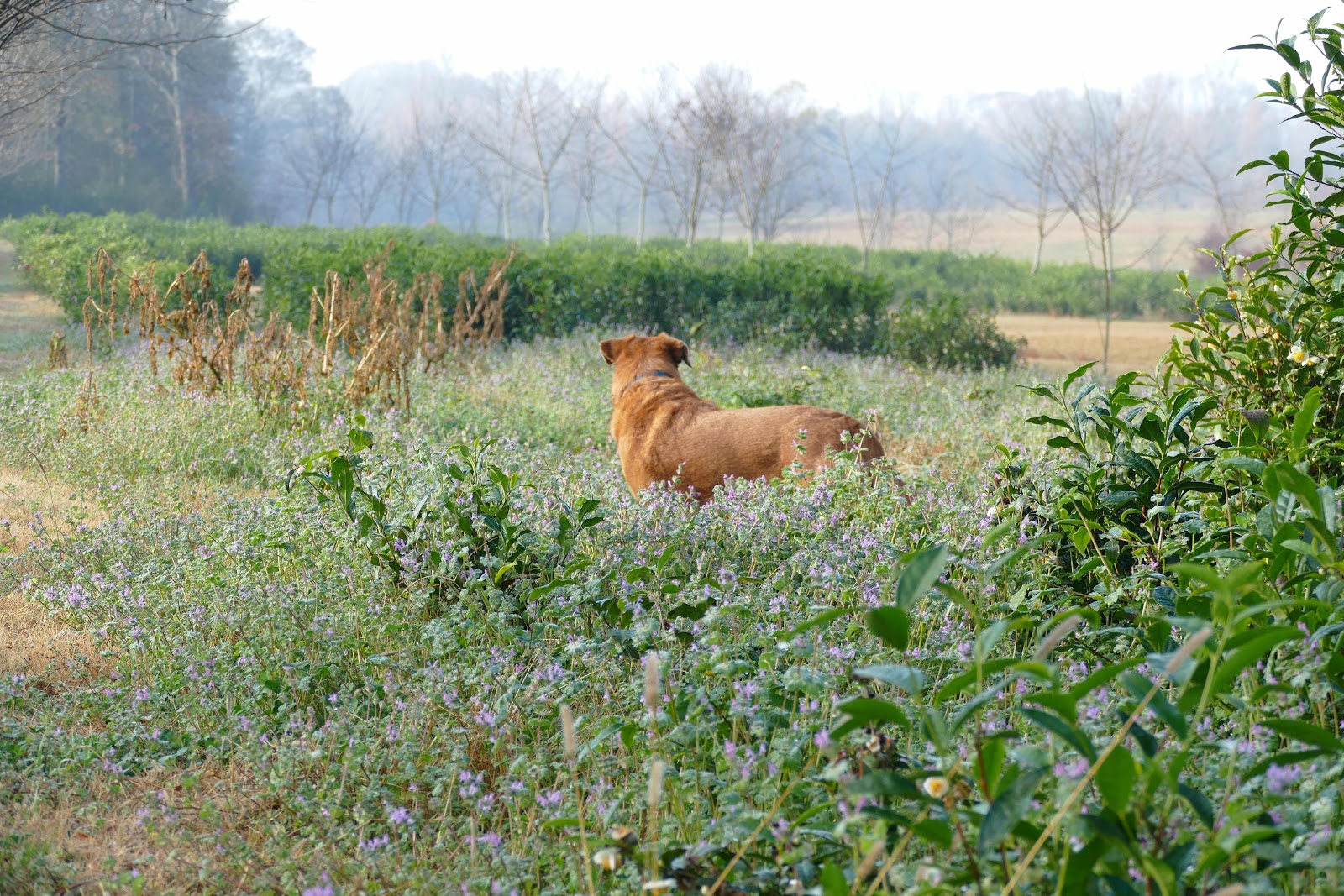 Rusty was free to roam and in the morning I got up late - hey! I'm retired! - and wandered around with my camera and occasional views of my dog's tail chasing back and forth between the rows of tea plants. 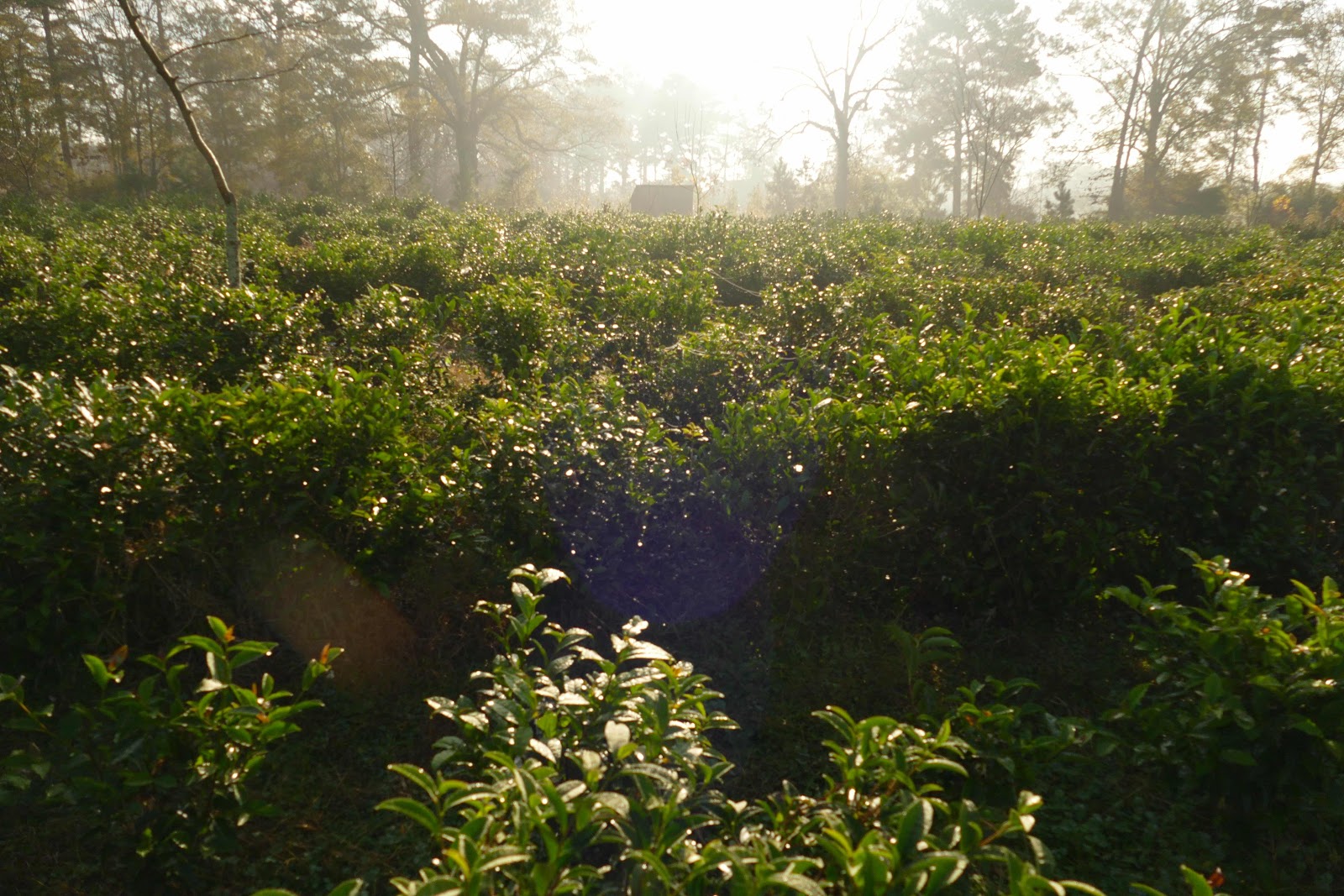 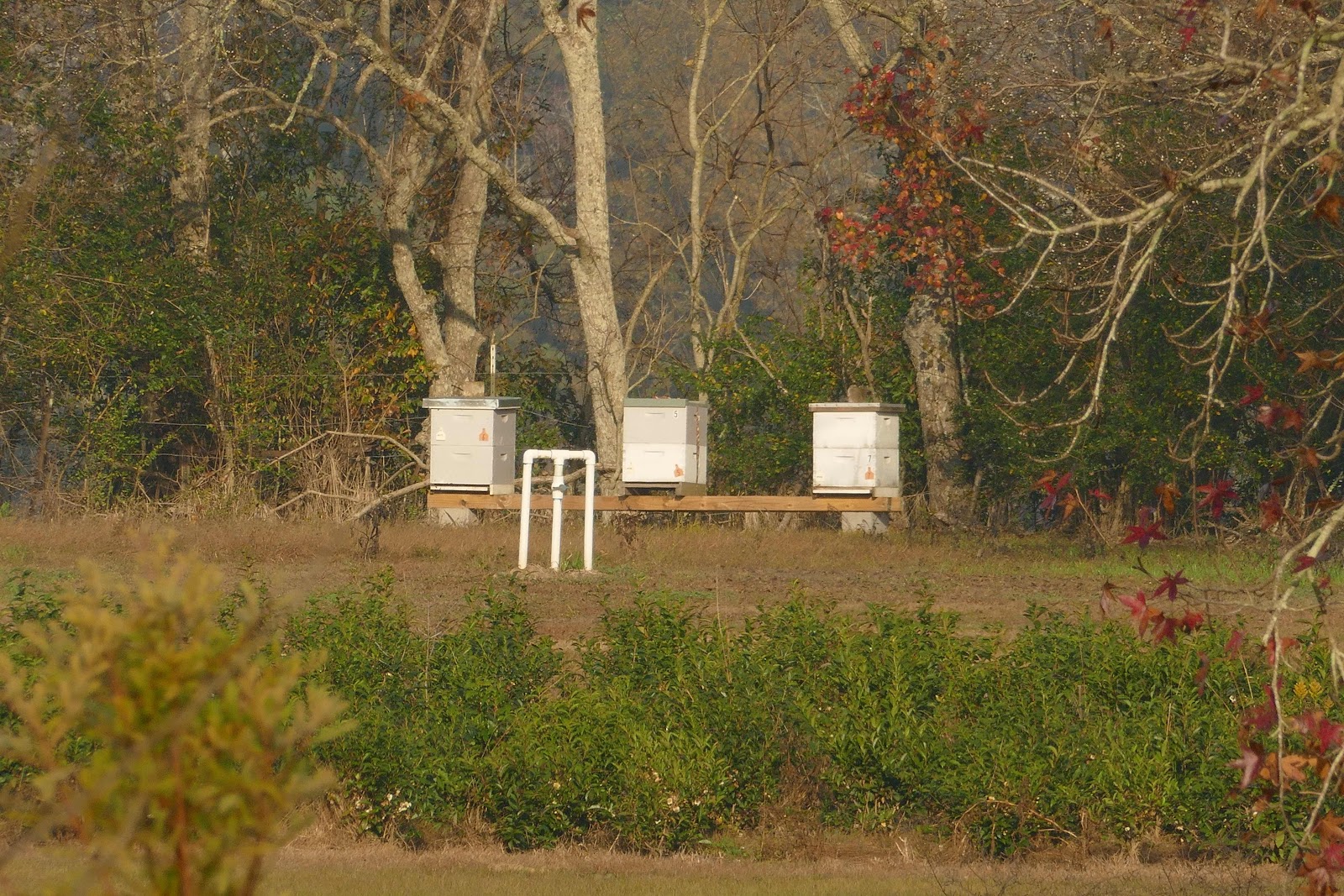 But back to the tour. After we studied plants, growing methods and leaf types Timmy walked us across the road, where locals don't slow for pansy tea tourists ambling along the shoulder... and we entered the world of Chinese tea making. Not that our guide has ever been to the Far East to see where tea has always been grown. They use an agent to ship their piles of equipment. 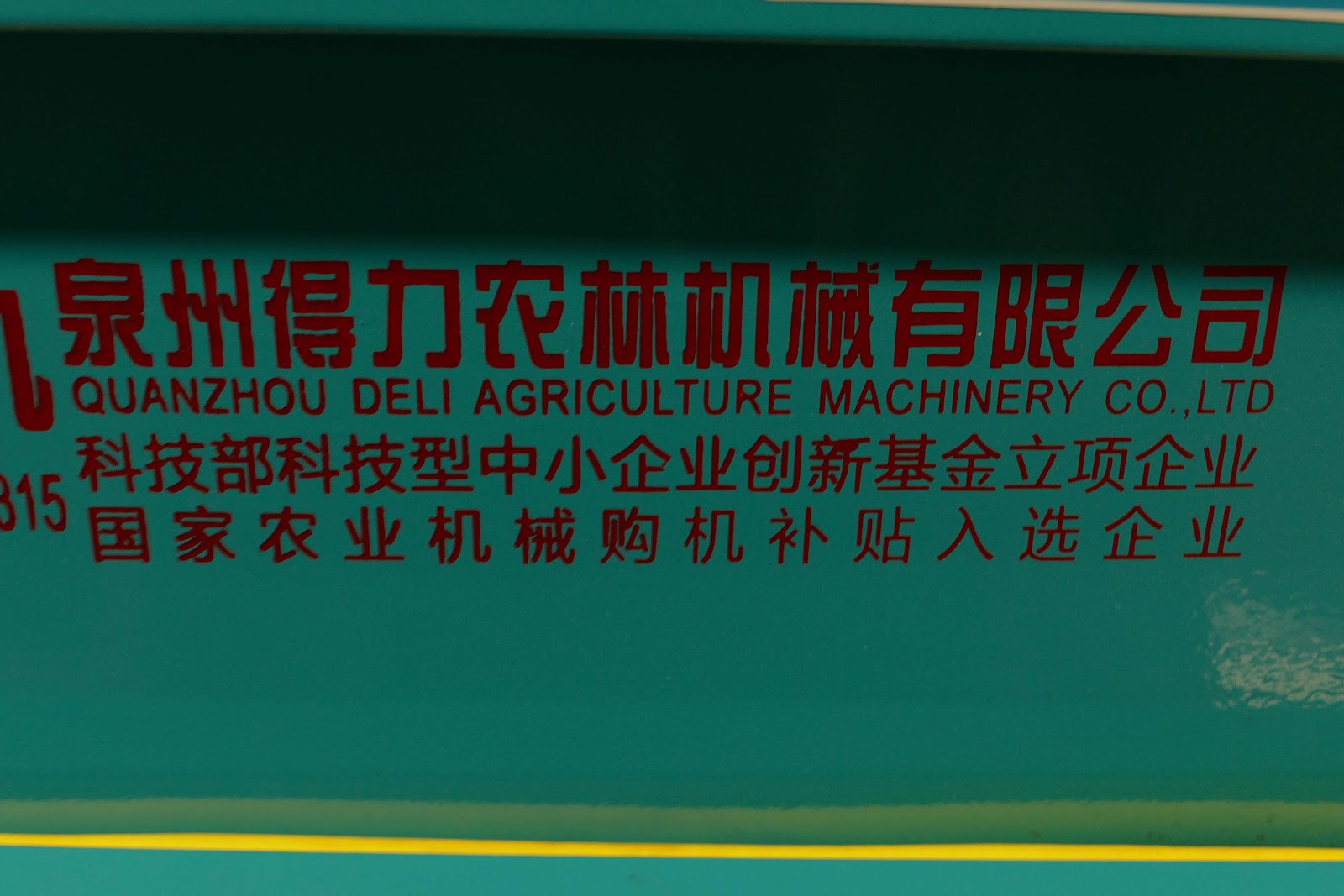 I can't detail the process as it would take ages, I didn't take notes and I was overwhelmed by the steps but everything is precise,timed to the second and processes are repeated until the desired degree of drying and rolling and  even bruising is achieved. Chinese drying racks for black and green teas which get different lengths of time to lose their moisture: 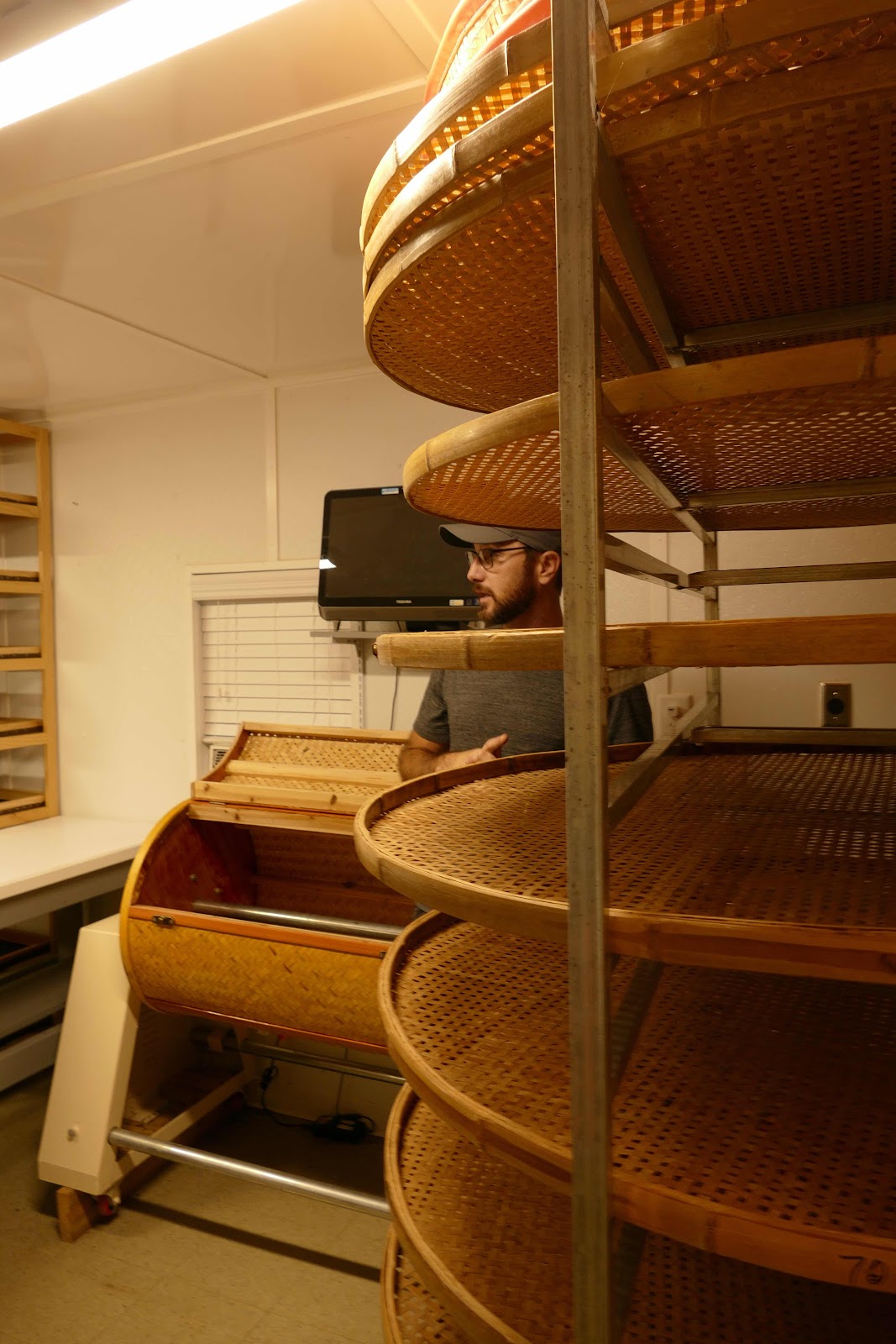 The roller which came with no manual, no YouTube instruction video or even any warning signs in English. Any paperwork the tea makers needed translating they emailed to a Professor of Chinese Studies at the university for her attention. 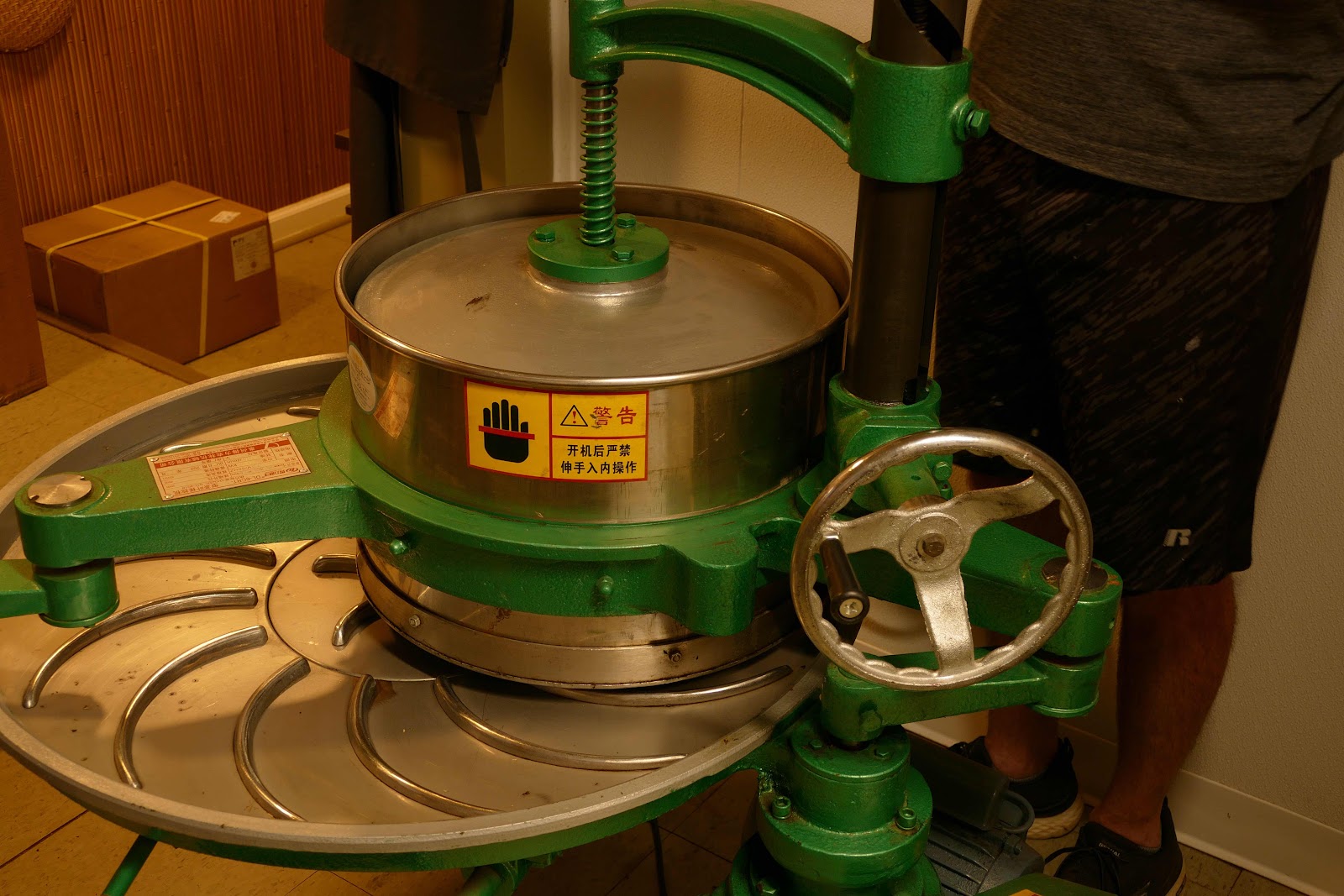 There is a line of machines to dry and roll and curl and sort the different teas desired and all from the same bushes outside. I had absolutely no idea tea making was so complicated. It has so many steps, so often repeated it makes wine making look simple. 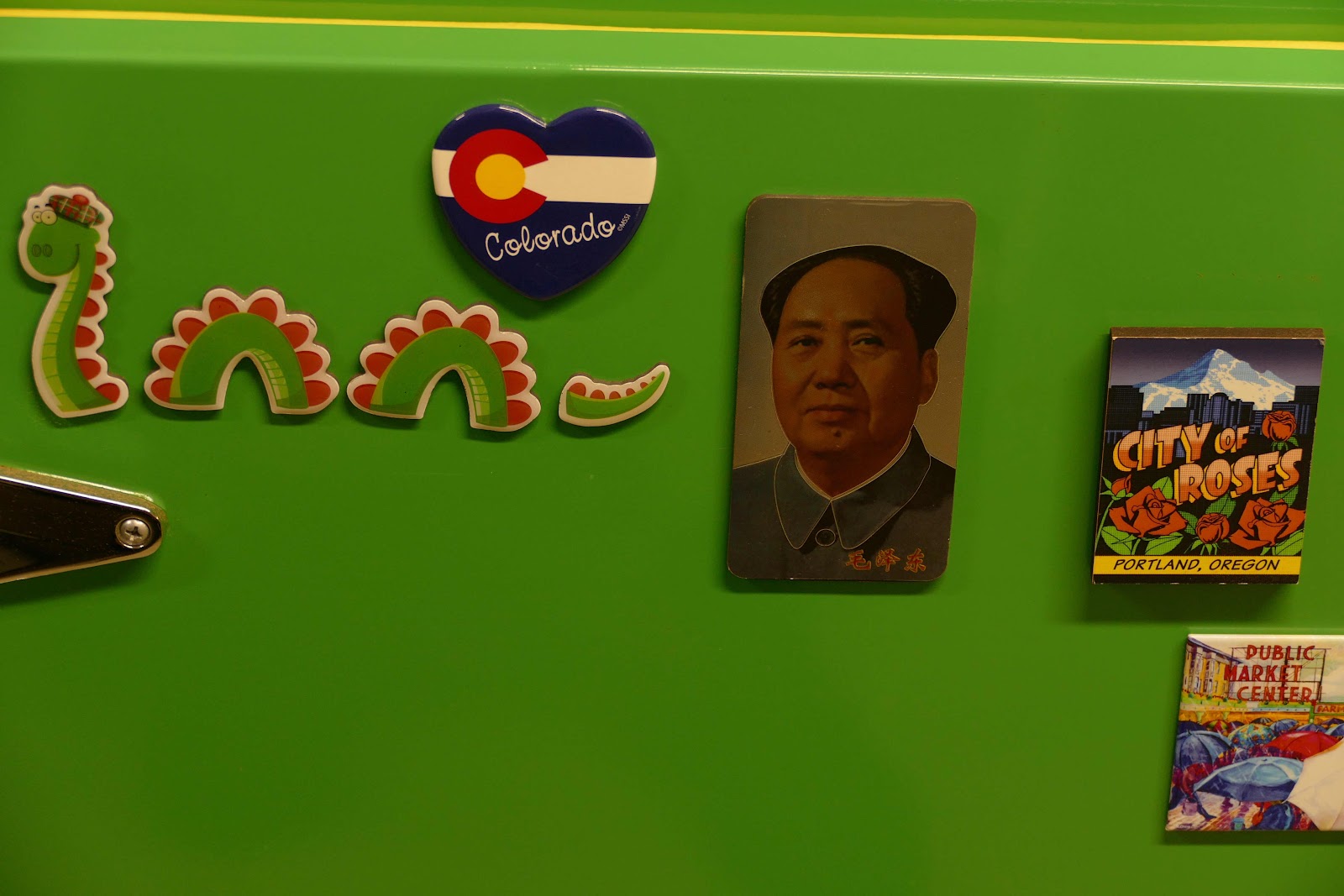 You dry leaves repeatedly, curl them so they don't flatten out and even bruise the edges so they release their flavors properly. You pick leaves one day a week and instantly start on this multi step job that takes hours of precision work. From here on I promise to drink my tea, whatever brand it may be, with due reverence and respect. 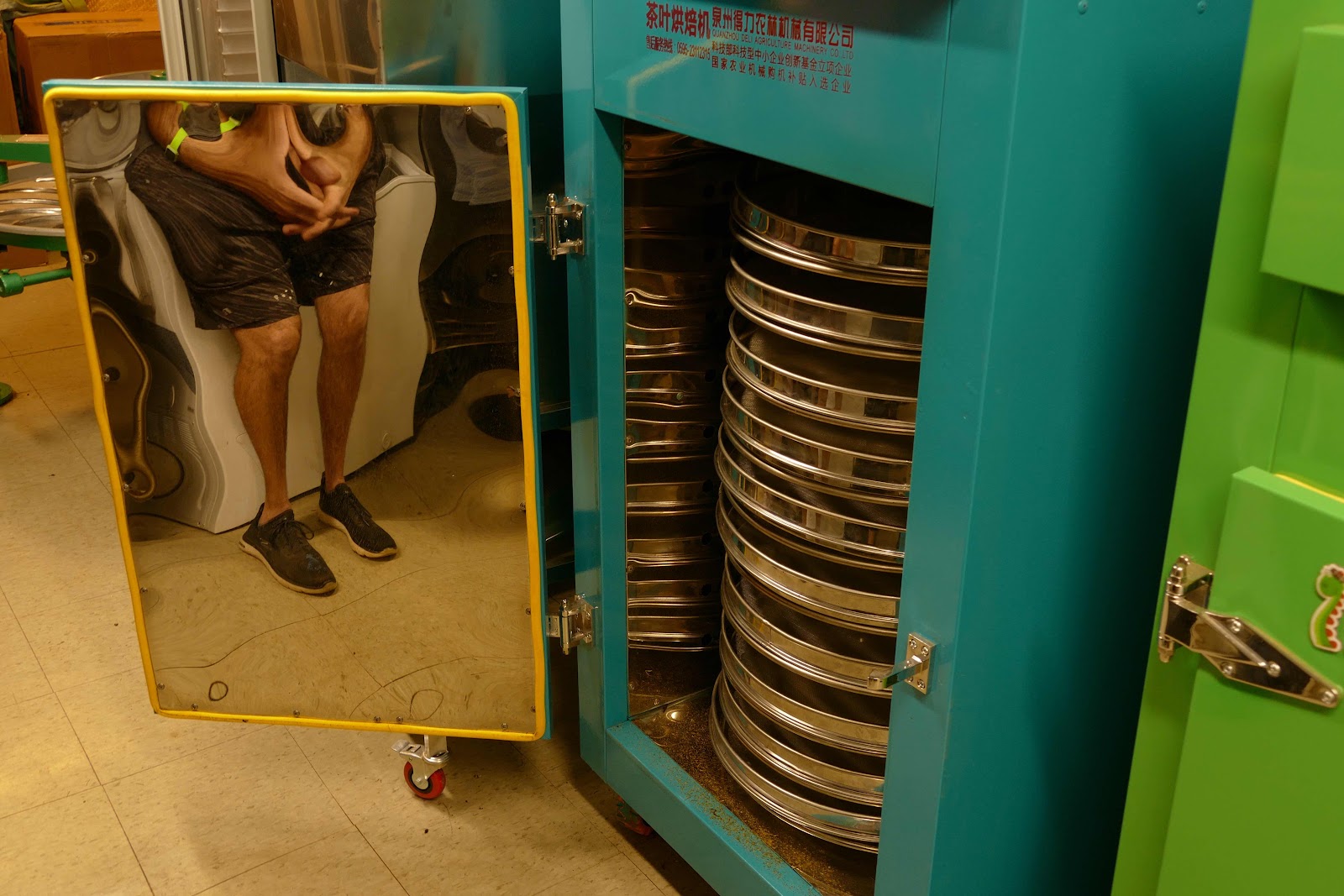 The Chinese don't build this stuff for export, and the measurements are all metric, even though Timmy thinks of Celsius in degrees Fahrenheit which I think is weird. He says his employee doesn't even are about the numbers. She just knows Green tea gets say 2 unites and twenty seconds at 90 (Celsius) and black gets four minutes fifteen seconds at 60. Where American electric motors can't be used the Chinese send adapters, hoping you can read Mandarin. 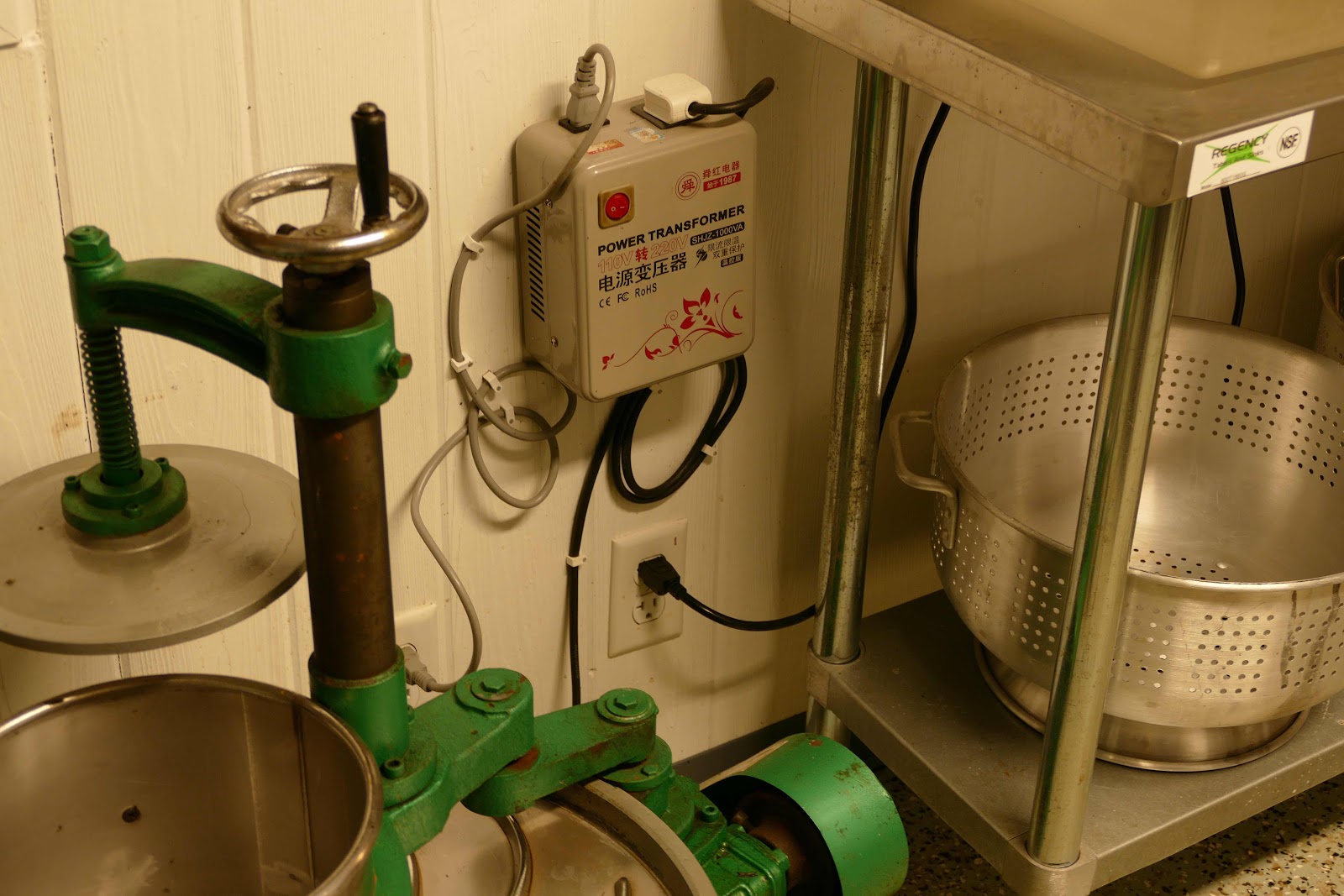 The tearoom, the holy grail of the trip. Harvest Hosts welcome RVs, offer no facilities for the vehicle so we dry camp for free and the idea is the hosts are rewarded by selling a little of what they produce. We obliged as you might imagine. 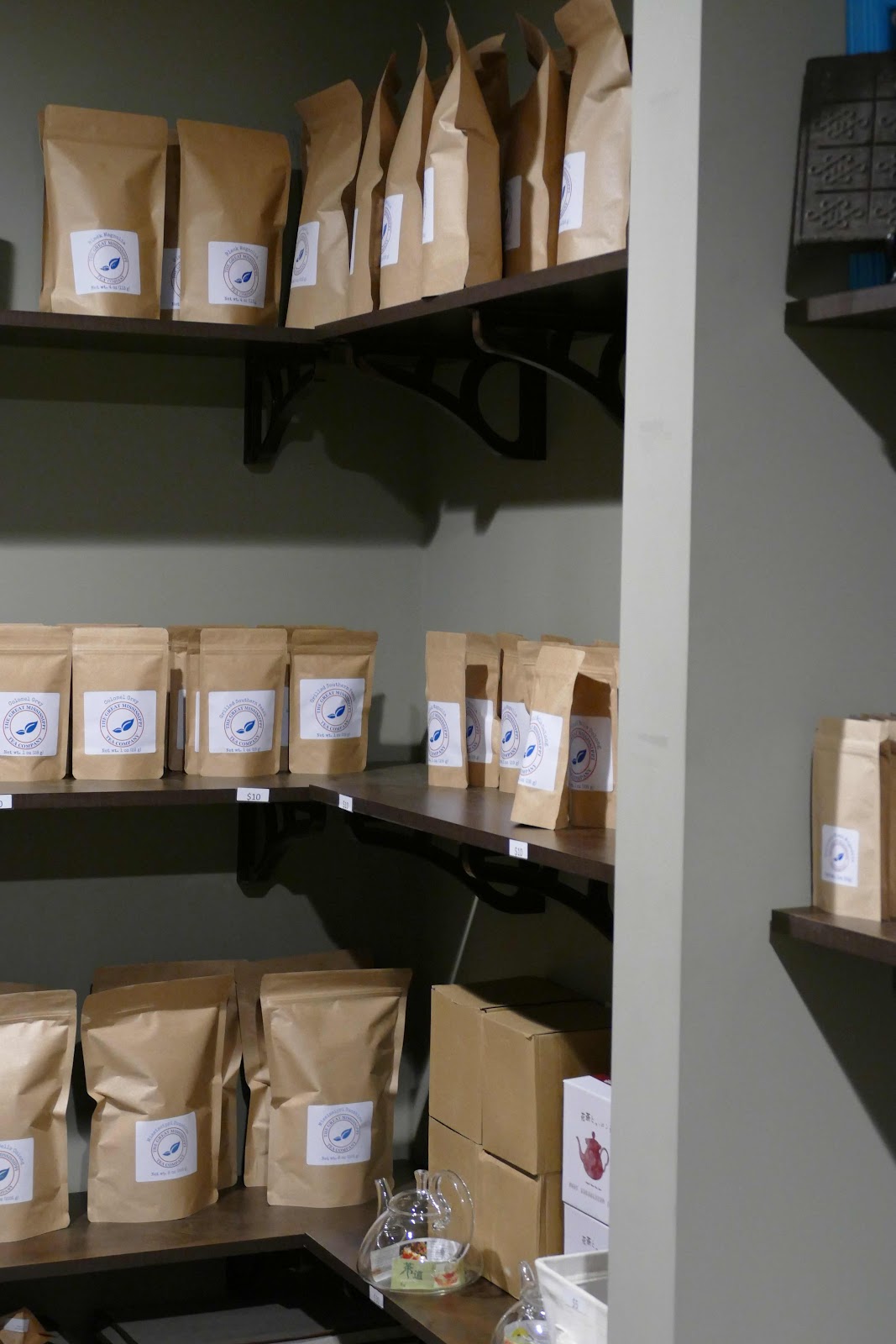 We got Chai for Layne and some green and yellow tea for me. Yellow tea incidentally is fermented by the Chinese, a process Timmy adapted by putting leaves in a vacuum bag and submerging them overnight in a sous vide water cooker overnight. If you are tempted they do ship, obviously. 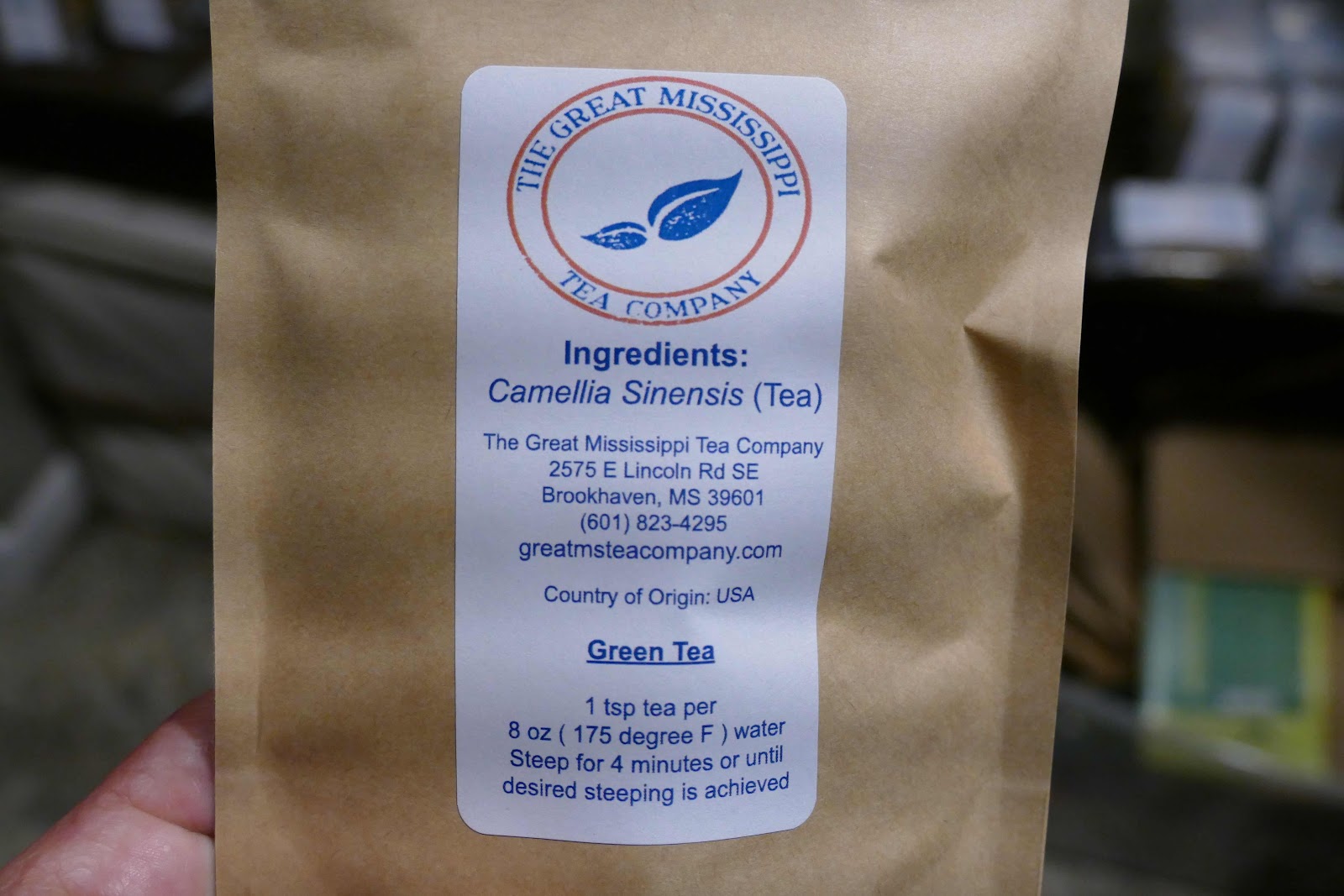 The other couple from Illinois in a more conventional forty foot home with all accessories said they were interested in the farming but all they drink is iced tea - barbarians! There were teas for them too of course. 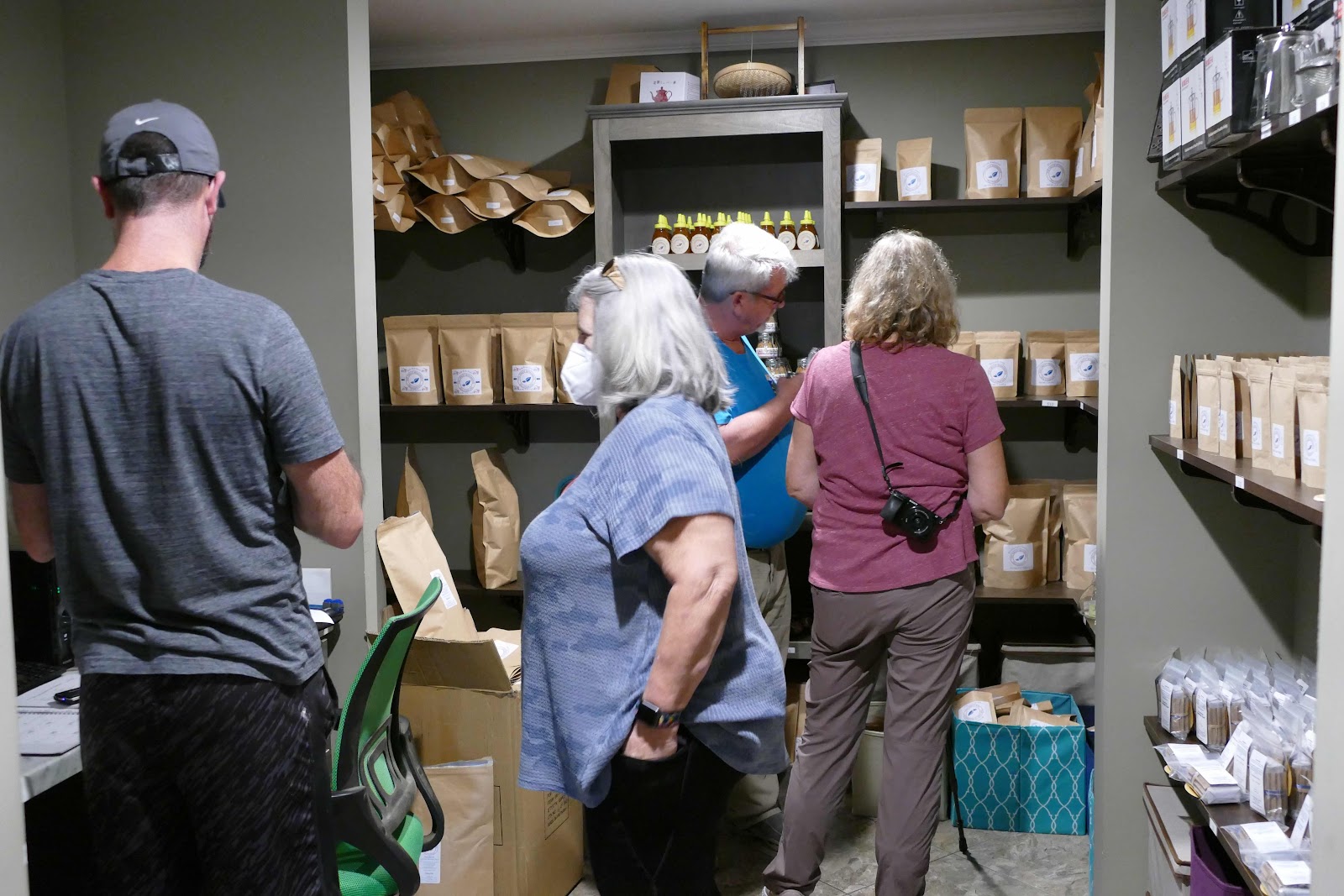 In the morning Timmy rolled by with our tea orders, Chai for Layne and the mysterious yellow tea for me. I found it quite interesting lightly sweetened. It tastes like strong tannic green tea. Fact #6: Incidentally Timmy says the white tea that has become popular only uses the very tip of the plant and requires one hundred thousand leaves to make a pound of tea. Too fiddly even for his immense patience. I can't even taste white tea so I am not a fan. 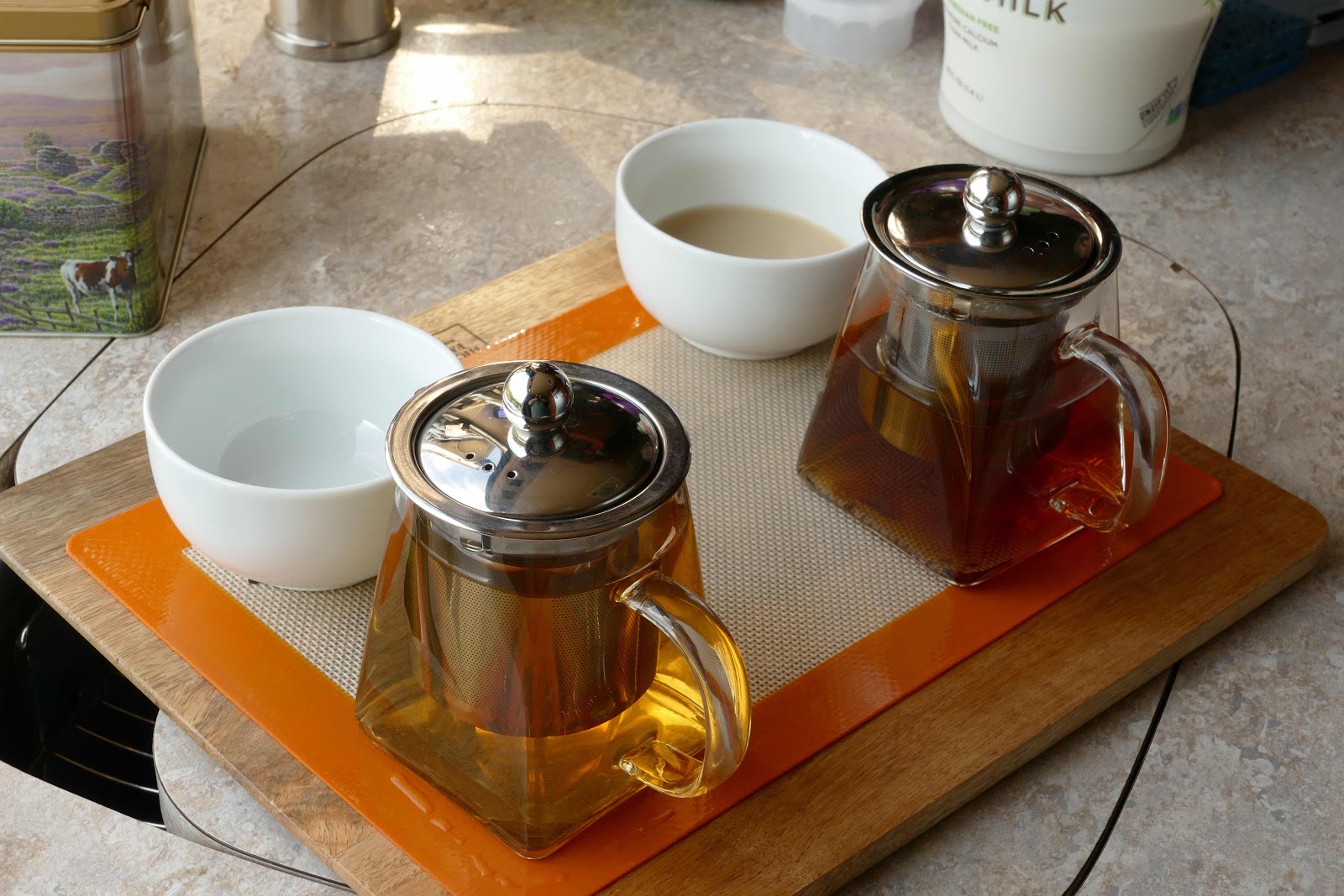 Bees humming, birds chirping and yellow tea to hand. Rusty was off minding his tea bushes nose down and tail up. 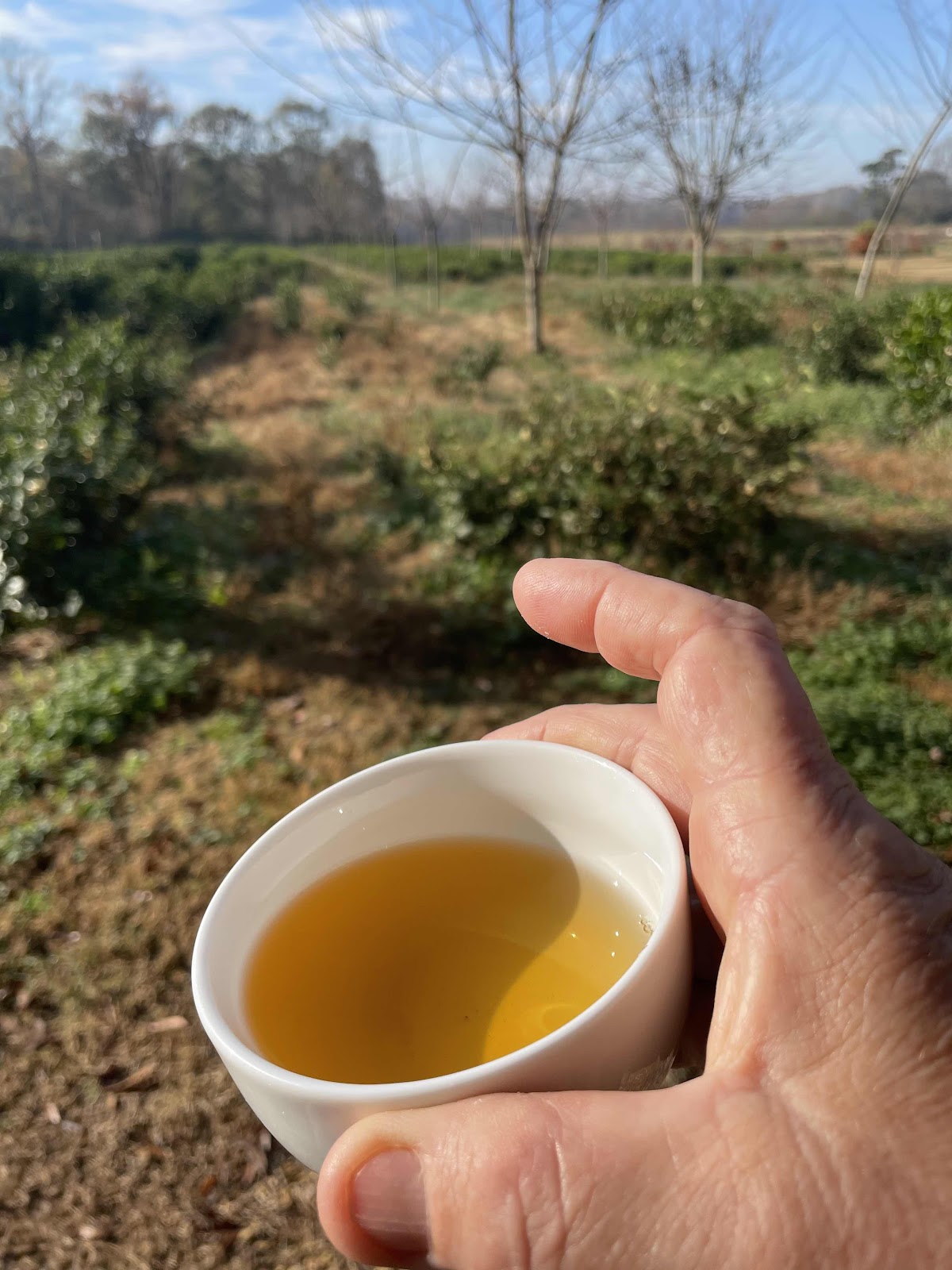 Eventually he too slowed down and settled to watch the world, his favorite activity. Ed the coffee drinker came by and we exchanged thoughts about tea and travel and the hope that the virus will fade away. he has moved full time into his rig and he says they like to wander around looking at small farms and local producers all over the country as his wife grew up in a farming family. The pleasure of retirement on the road is where you find it. Everything climbs to the apex is how I would translate the poster, I hope accurately. Slightly obscure but the French often are. 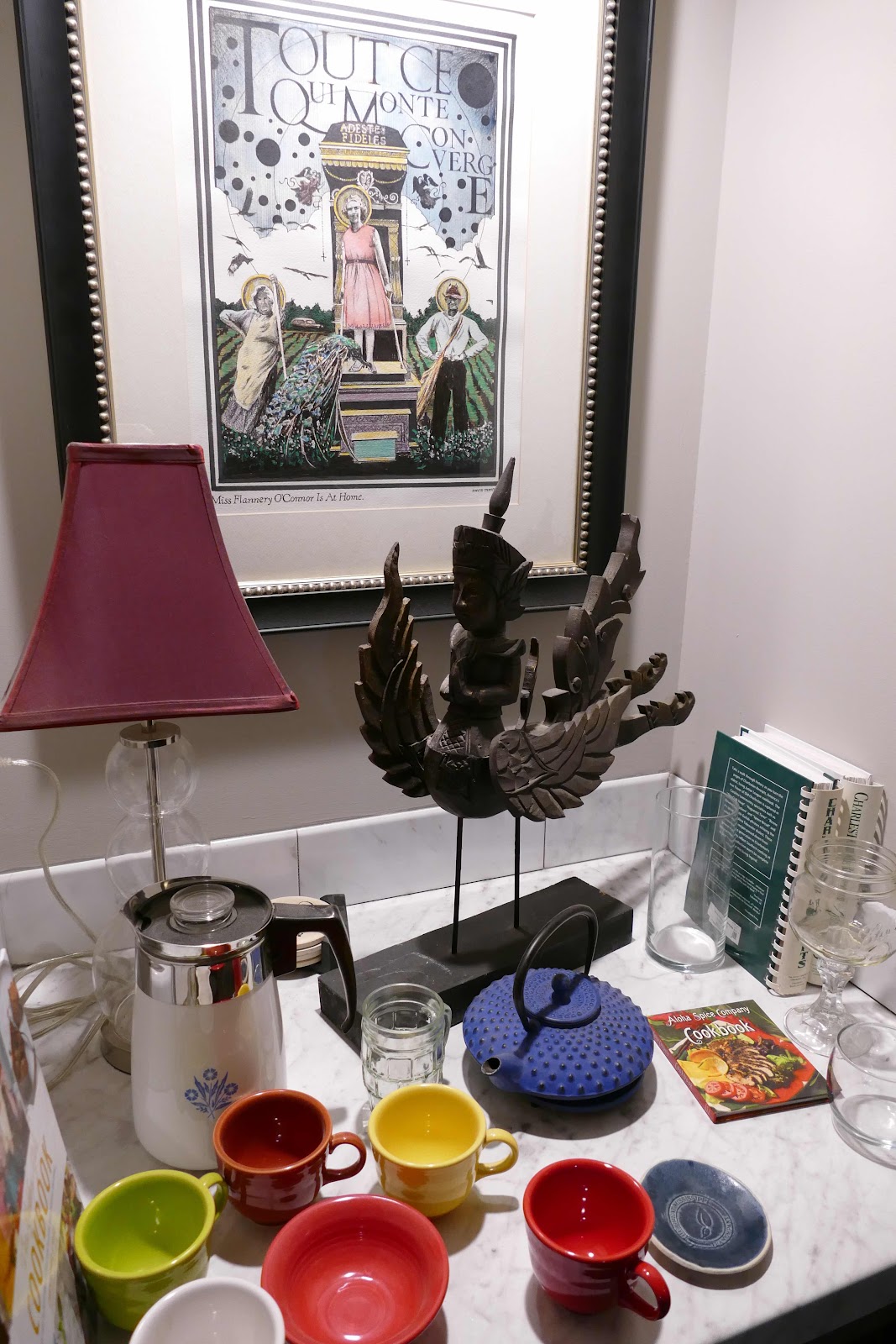 I'm actually quite glad the boys didn't stick to conventional farming making milk or butter or something banal. Tea in Mississippi? Why not.
Posted by Conchscooter at 5:00 PM 2 comments: