Next week it will be the longest day of the year when the sun gets as ar north of the equator as it gets. In Barrow Alaska they continue t enjoy all day sunshine and freezing temperatures... Richard's Page. In Lotus Land things as usual are a little less extreme. We get sunrise close to six-thirty and darkness around 8:30pm and temperatures are lately feeling quite summery, hot and humid. 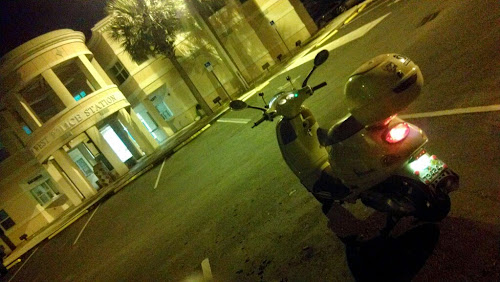 My wife is changing jobs in the school district next year to Adult Education and her Vespa will come back into play as she'll need wheels to get to around various sites around town. For now I get to ride it from time to time to keep it fresh. The 27 mile ride to Wor charges the battery and a drop of Seafoam in the tank keeps the carburettor clean. Of all the new Vespas my favorite four stroke ride is this old (2004) ET4, 150ccs of commuter glory. It's low tech, air cooled and free of fuel injection and it never gives trouble. It wears out tires in a hurry and they aren't terribly DIY to change while the belt drive is a pain, two reasons I like the idea of my older geared Vespa and its split rim wheels which is currently being restored. 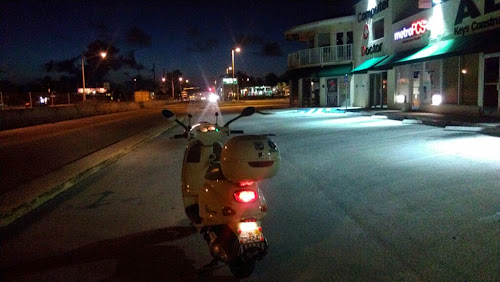 But this thing is a blast to ride and on a warm summer morning my commute home invites me to stop and take pictures here and there. Above I just turned out of the police station ont North Roosevelt where construction has shown no progress at all for months. Even the mayor got publicly pissed off at the contractors for stalling this massively annoying job. The one way inbound Boulevard means outbound traffic has to take Flagler which at five to six in the morning is pretty much empty. At five in the afternoon traffic gets back up for half a mile. 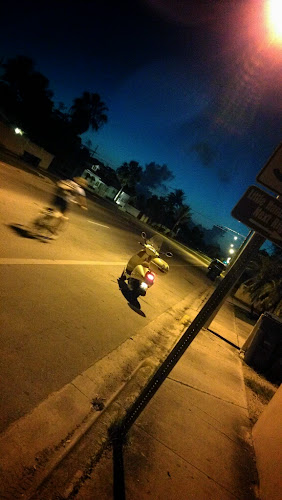 The single bridge in and out of town over Cow Key Channel looking west into Key West. The view north and south is of water meandering through mangroves, to dark to photograph on the fly at this hour of the morning. 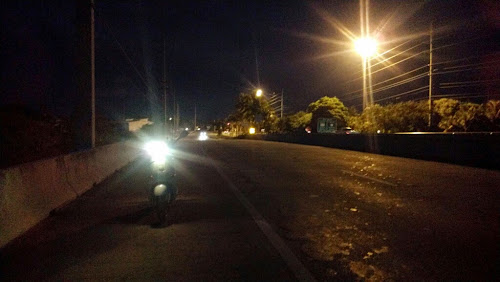 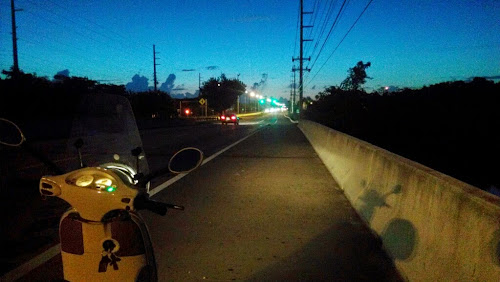 This is a town filled with murals. These sandal stores advertise on large expensive bill boards along the highway. Cheap sandals must generate huge amounts of money. Why pay Key Awestruck prices te billboards ask in the modern style of posing rhetorical questions at every turn... Why pay Key West rent is I suppose the answer, so we did a mural on an unlikely sandal store on Stock Island's business drag on the highway. 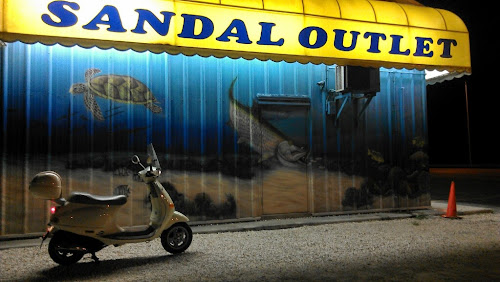 The's a series of three traffic lights on Stock Island and of course they snag me coming and going. I love that there is a growing movement to take lane splitting national. Can you imagine how excited these dopes in cages would be if I pulled alongside them and took off while they were still engaging their brains as the light goes green. Never happen. I like the idea of lane splitting but in Florida where bad driving goes hand in hand with a bad attitude and widely available guns life would become even cheaper on our roads with motorcycles getting to the head of the line "unfairly." 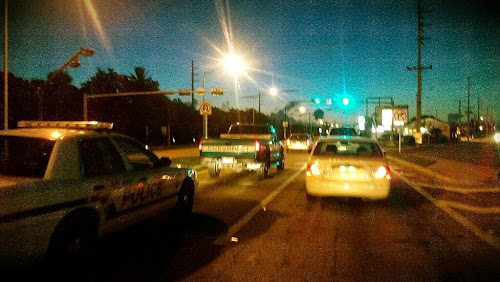 I'm going to Italy in Spetember and I can hardly wait to cut to the head of the lines of cars...why? Because I can and because it's expected. The other morning I was leaving Big Coppitt on the Vespa and I got stuck behind two cars doing forty in the fifty five. The SUV had a wide open chance to pass the black Nissan with a Maryland tag but didn't take it. I passed the SUV on my "moped" and waited for my chance to pass the dope in the Altima. I needn't have worried, as soon as the driver saw the moped suddenly in his mirror he took off like a scalded cat. It was one of my fastest rides home as he tried to lose me and swept down the darkened highway far enough in front for me to get plenty of warning if he spotted a cop. I love how threatened people get when there's the possibility of being passed by a Vespa... 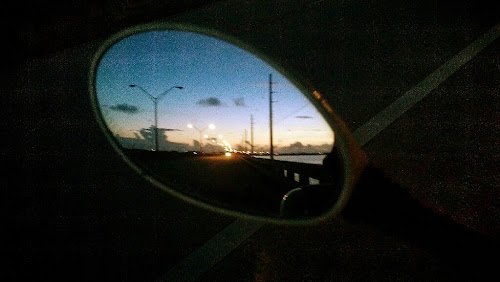 I talk airily about getting home but so would you if you had bee sitting up all night working. That doesn't alter the fact the views are pretty damned nice this tIme of the year as thunderheads hide the sun and it's attempts to put in an appearance. 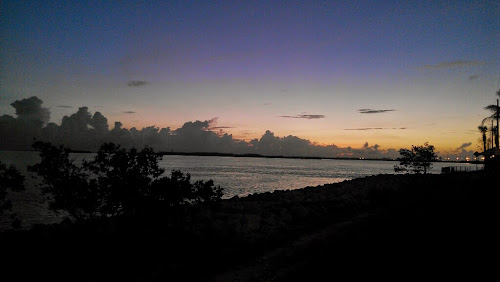 When the wind dies down the sea gets to look like a mirror. Some people enjoying rocky cliffs and headlands with huge waves breaking on them. I saw that for twenty years in Santa Cruz as the Pacific tried to wreck California. I like these pacific views better. 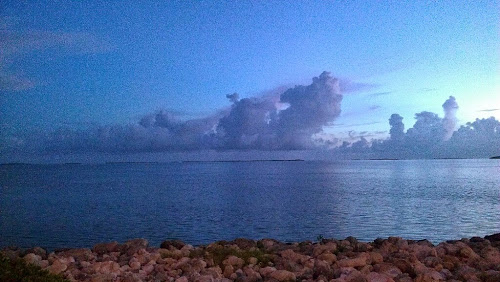 Public chickens I don't like and they are everywhere in the Lower Keys including the Shell station on Big Coppitt Key. 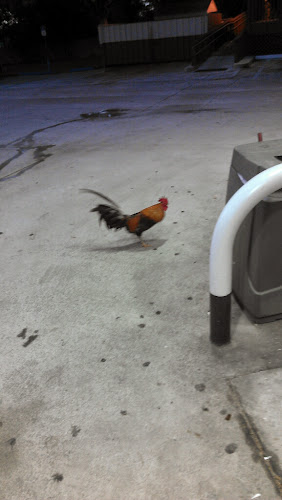 There is a Shell on Summerland Key where they sell ethanol-free gas ostensibly for boaters but I like to put it in my bikes. However the Vespa has a tank that holds less than two gallons and even at 70 miles per, it gets difficult sometimes to time the refill to be salty on Summerland Key, fifteen miles away. 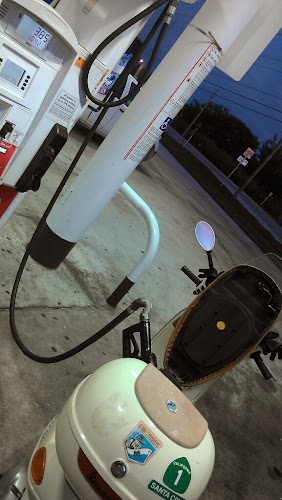 The sun is coming, the pink streaks are just a preview: 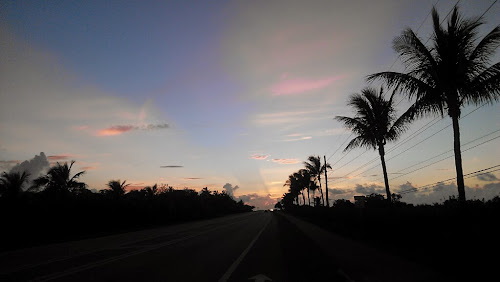 By the time I get home these days, around 6:30 the day has started in ernest, My house illuminated through te mangroves. You'd think there would be a big yellow furry face peering down looking for me. 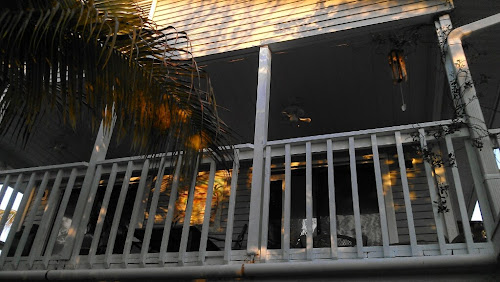 Stopping to take pictures delayed me by half an hour so I actually arrived at seven in the morning. My wife took this picture of Cheyenne who lives her life like clockwork and knows exactly when to expect me home. Hmm, you can see her thinking; where is he? 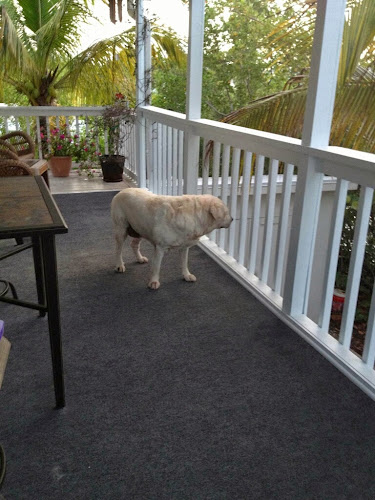 Oops, there he is! She's looking under the house because that's where she expects me to be but I was coming out of the shed in the "wrong direction" when she clambered down the stairs. Happy reunion! 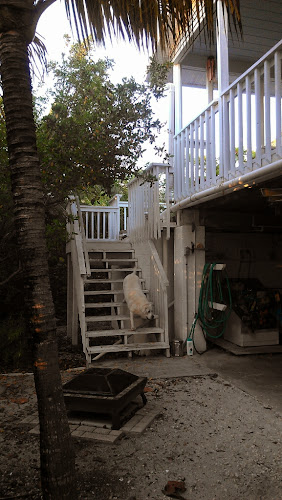 So we take a walk together to start our day. That's how it is commuting on the longest lightest days of the year. 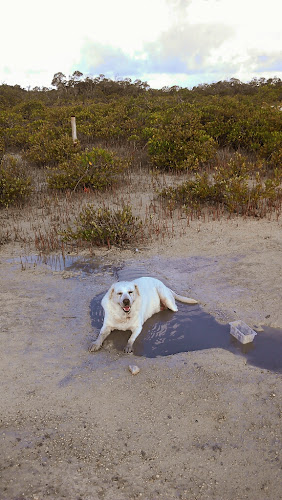 Happy dog. My reward for another night at work.