I was tempted to label this entry in the West Texas saga as simply "Roadside Kitsch" but that would be unfair. After all, even the most enthusiastic road tripper (Me! Me!) needs something to look at, even if it is a promoted cut out in the desert. 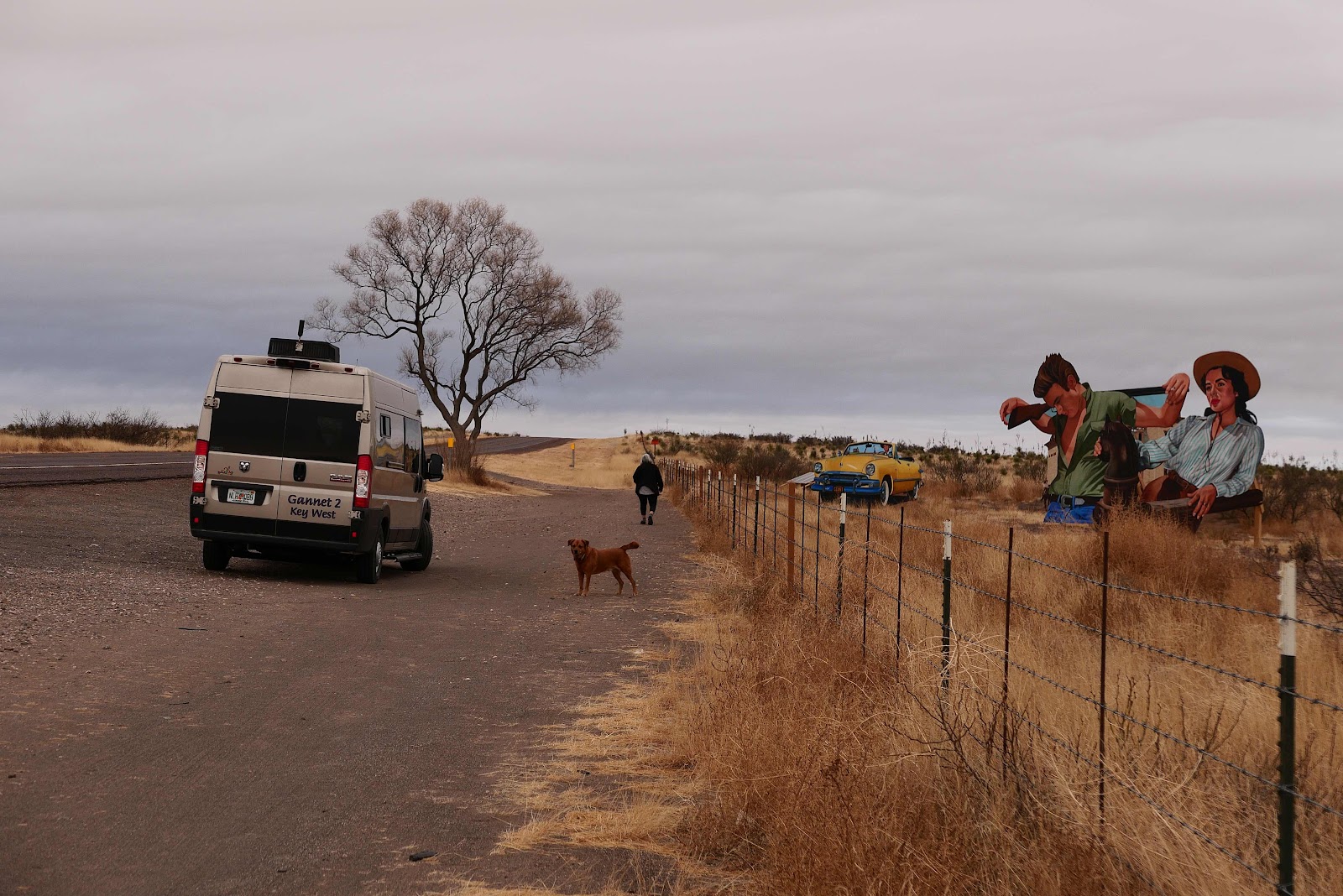 "The Giant of Them All" by Edna Ferber was the inspiration for a movie directed by George Stevens and when it came out in 1956, before I was born no less, it was also the ill fated James Dean's swan song. 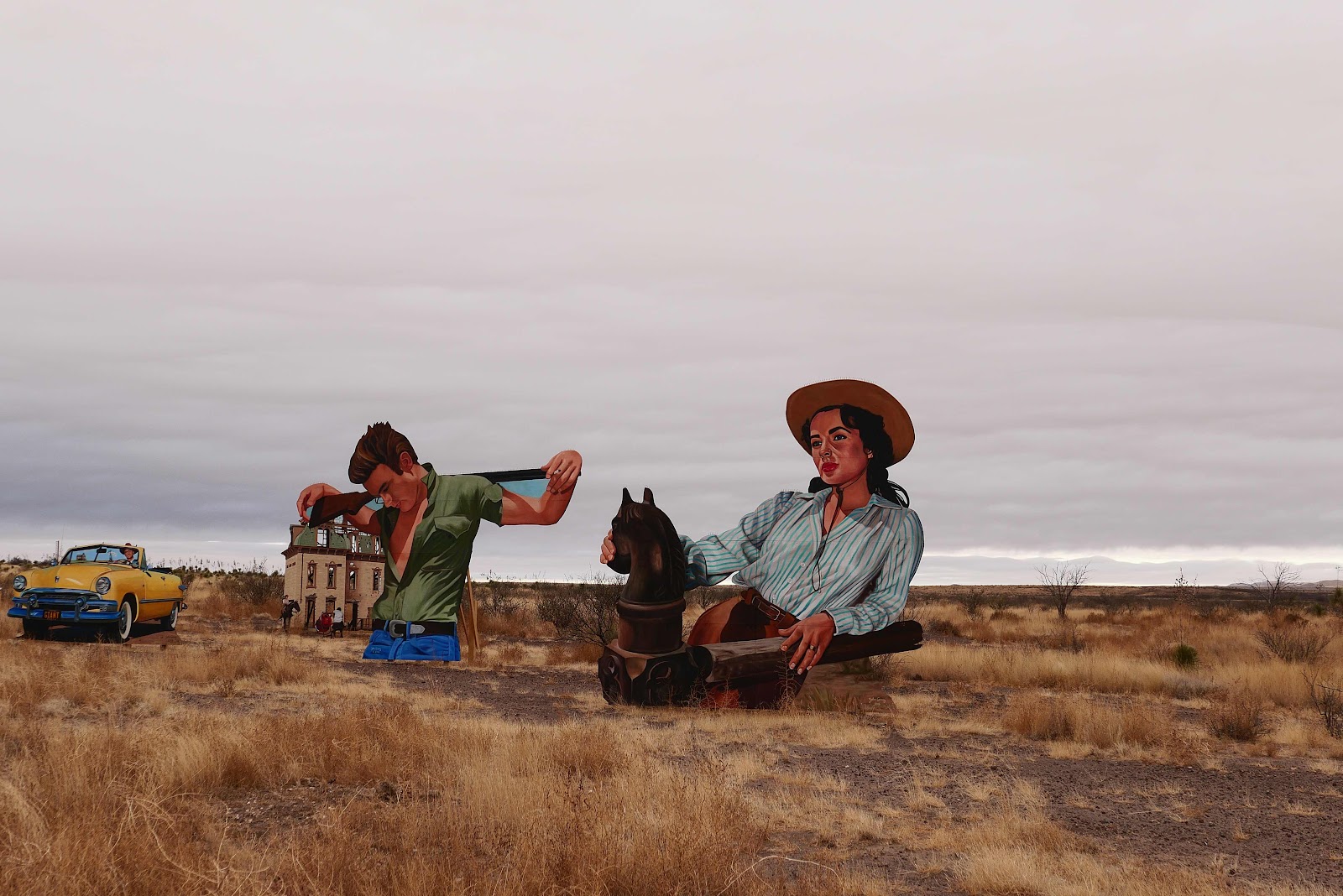 No wonder then that the location of the Texas position of the shoot has been memorialized with this scene where the mythical Reata Ranch scenes were shot. The car below has the extraordinary quality of appearing to follow you as you walk past it. 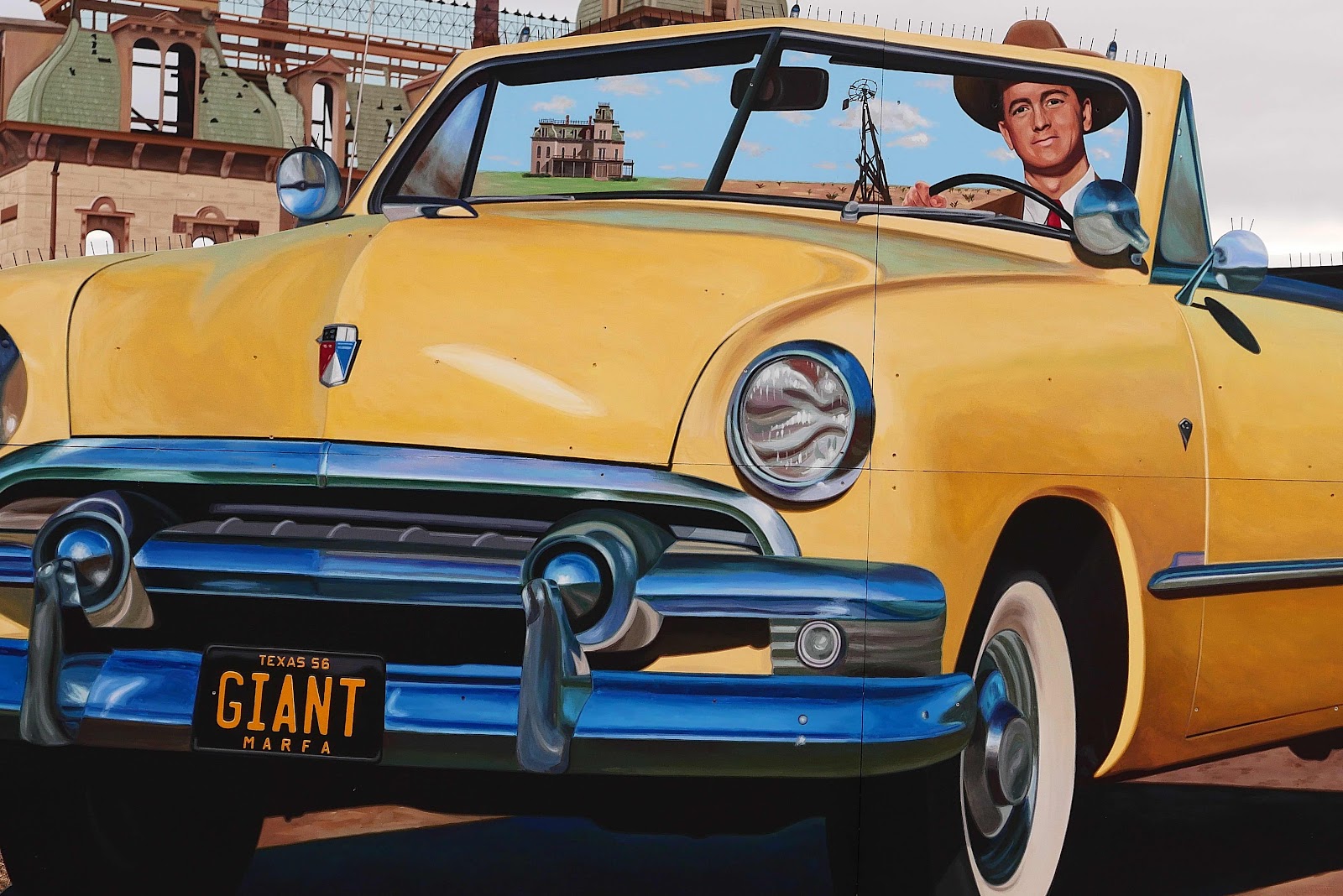 The artwork was created by John Cerney of Salinas, California (my old stomping grounds) in 2018.Great stuff and throughly worth the stop. Note there are signs warning trespassers from broaching the fence onto the ranch property! 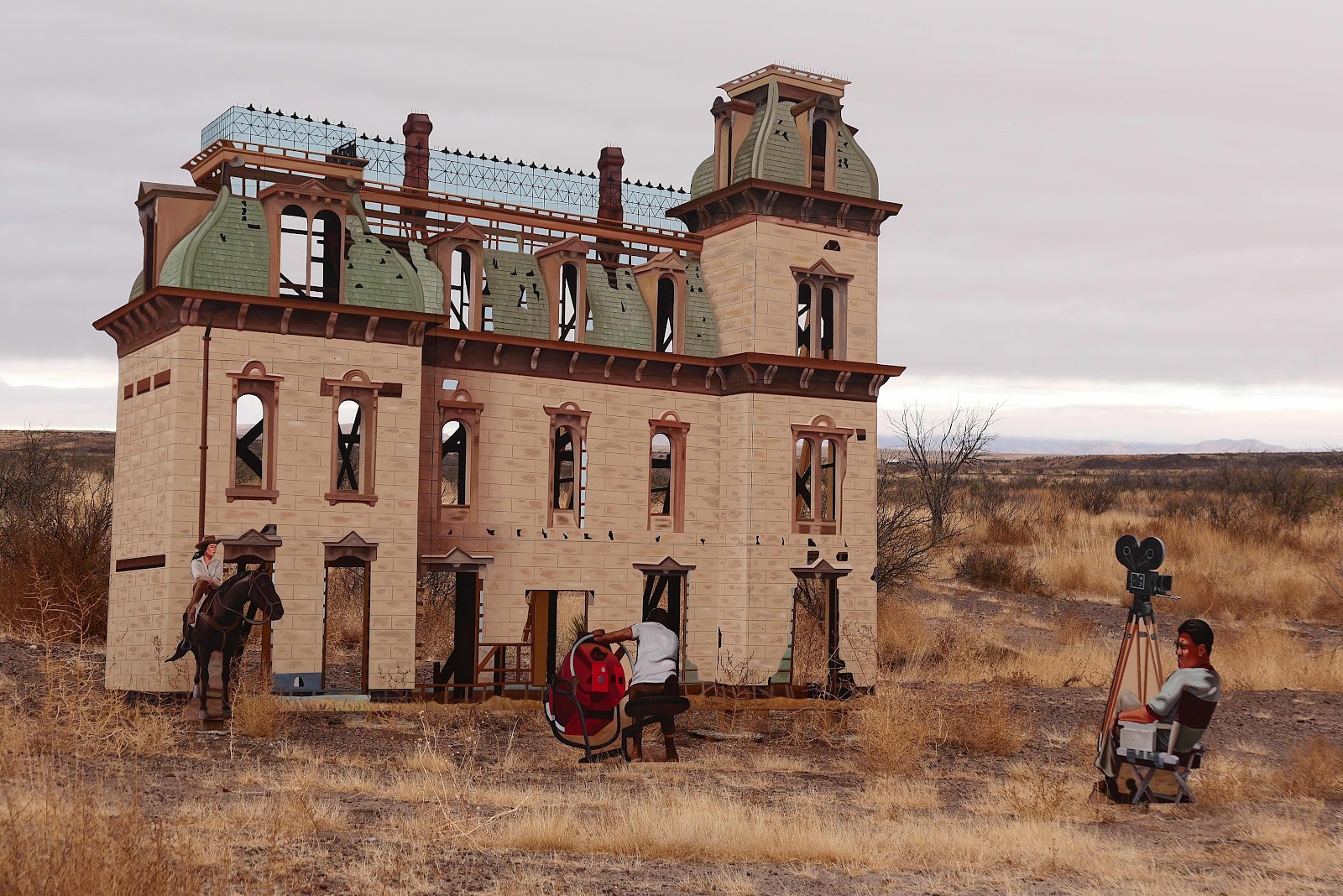 We drove on to the next stop. A young couple who had preceded us at the Giant stop were already at the Prada Marfa art work and they got back in their Subaru and turned back to Marfa 37 miles away! We at least stopped in passing...they drove 76 miles to just to check this stuff out! Good for them actually and I'd probably have done the same. 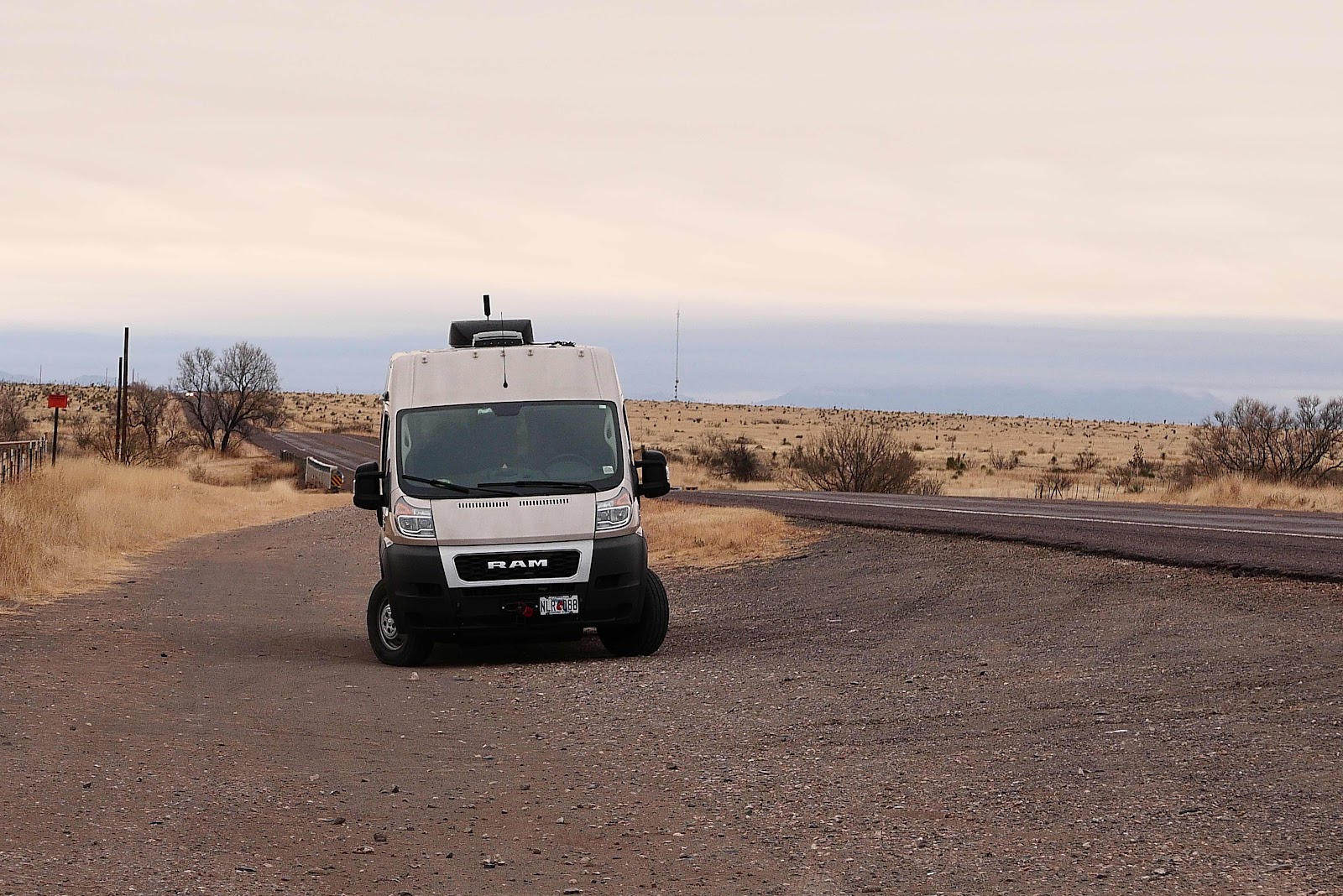 Mind you the road is empty and straight and just to prove the point here is an accidentally fuzzy picture (one of my spray and pray failures) to make sure you understand you aren't missing anything: 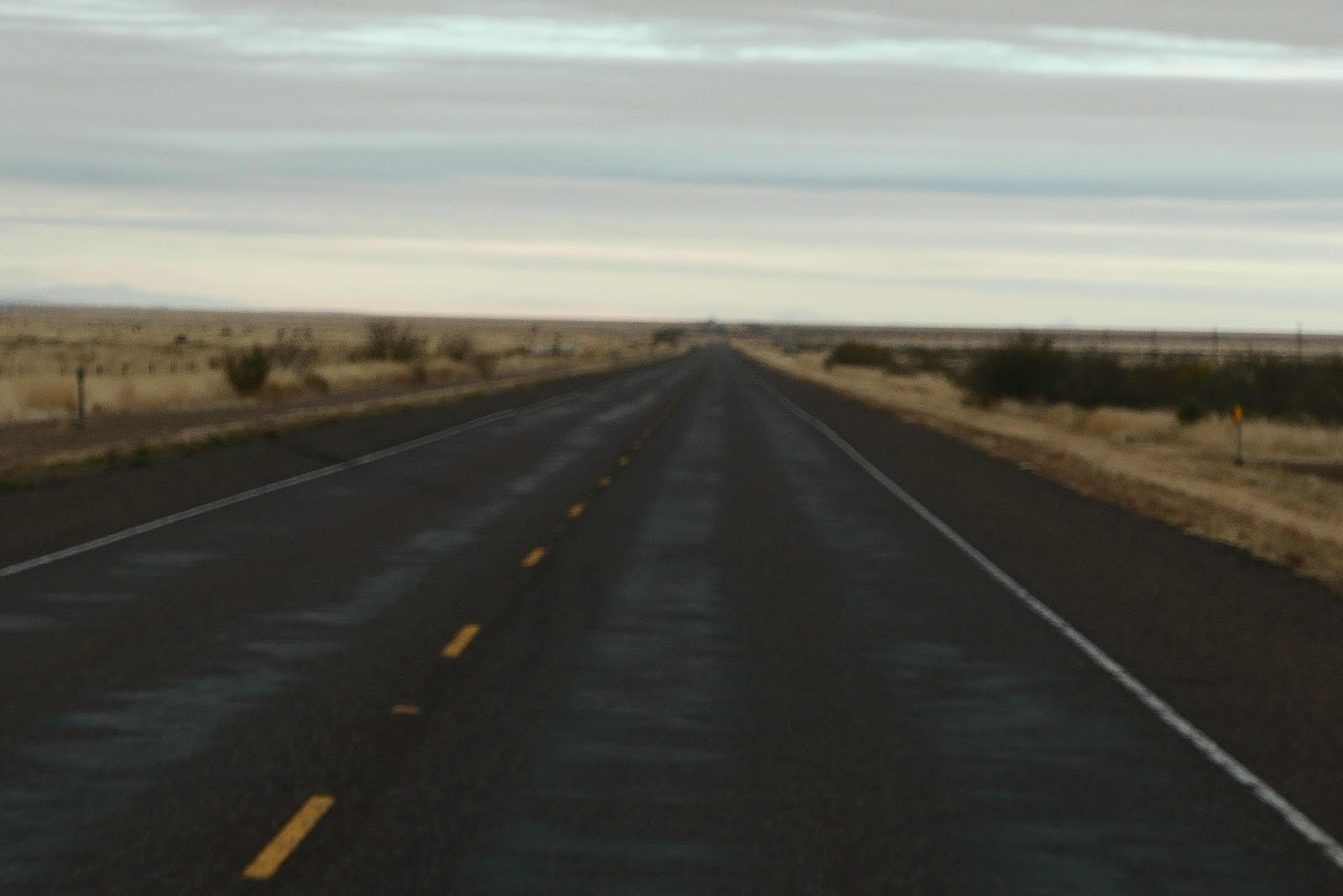 This one-piece "museum" was built in 2005 and has been through every kind of criticism and vandalism and controversy you'd care to name. No one important has yet noticed it is located in Jeff Davis County ( he of the now discredited Lost Cause fame. Controversy stalks the land!). 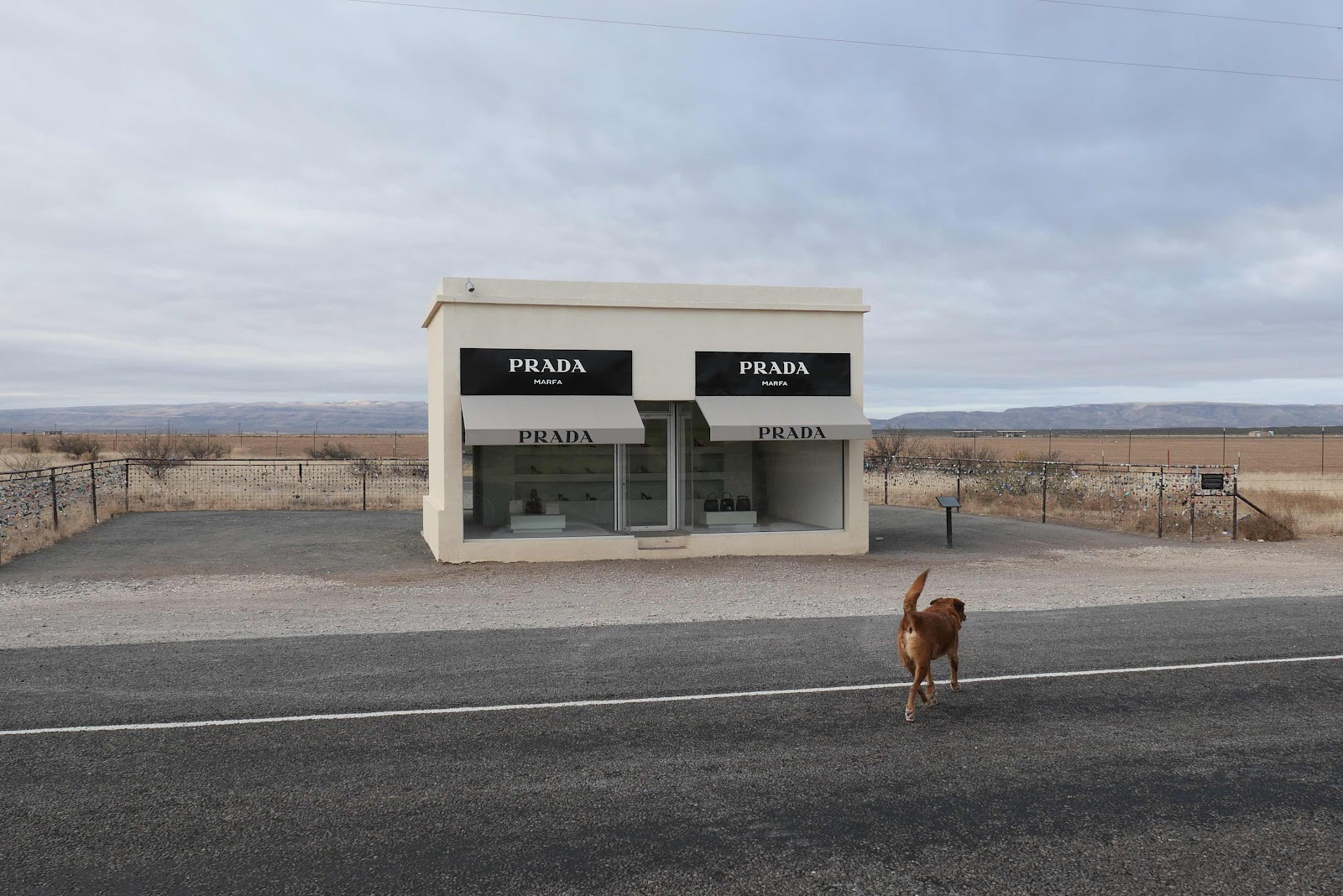 It was classified as a museum to avoid having to be classified as a roadside advertisement, an indignity it came close to suffering when Playboy put up a giant model of a bunny nearby. No good artwork goes unnoticed but the state only noticed this one when Playboy plagiarized the idea. The bunny was rated as unauthorized advertising but Prada Marfa survived. Read all about it:  Prada Marfa Wiki Link 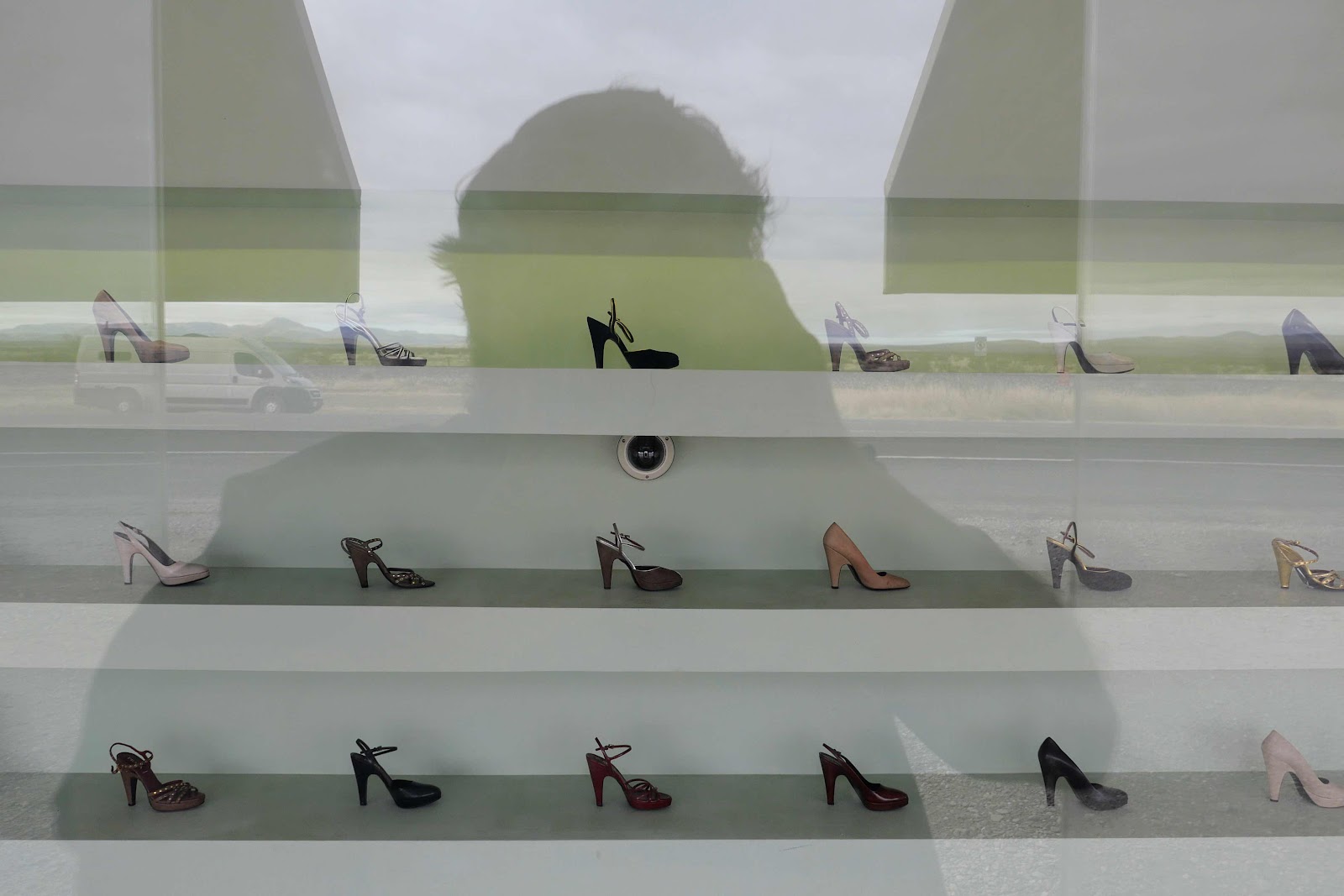 It is apparently a popular spot though we had it to ourselves. There are security cameras now after the monument to Miuccia Prada (net worth 4.8 billion) was vandalized. I did notice mysterious dark stains on the back wall so I suspect a porta potty might not go amiss next to the artwork/museum. Not everyone travel with their own toilet I'm afraid. 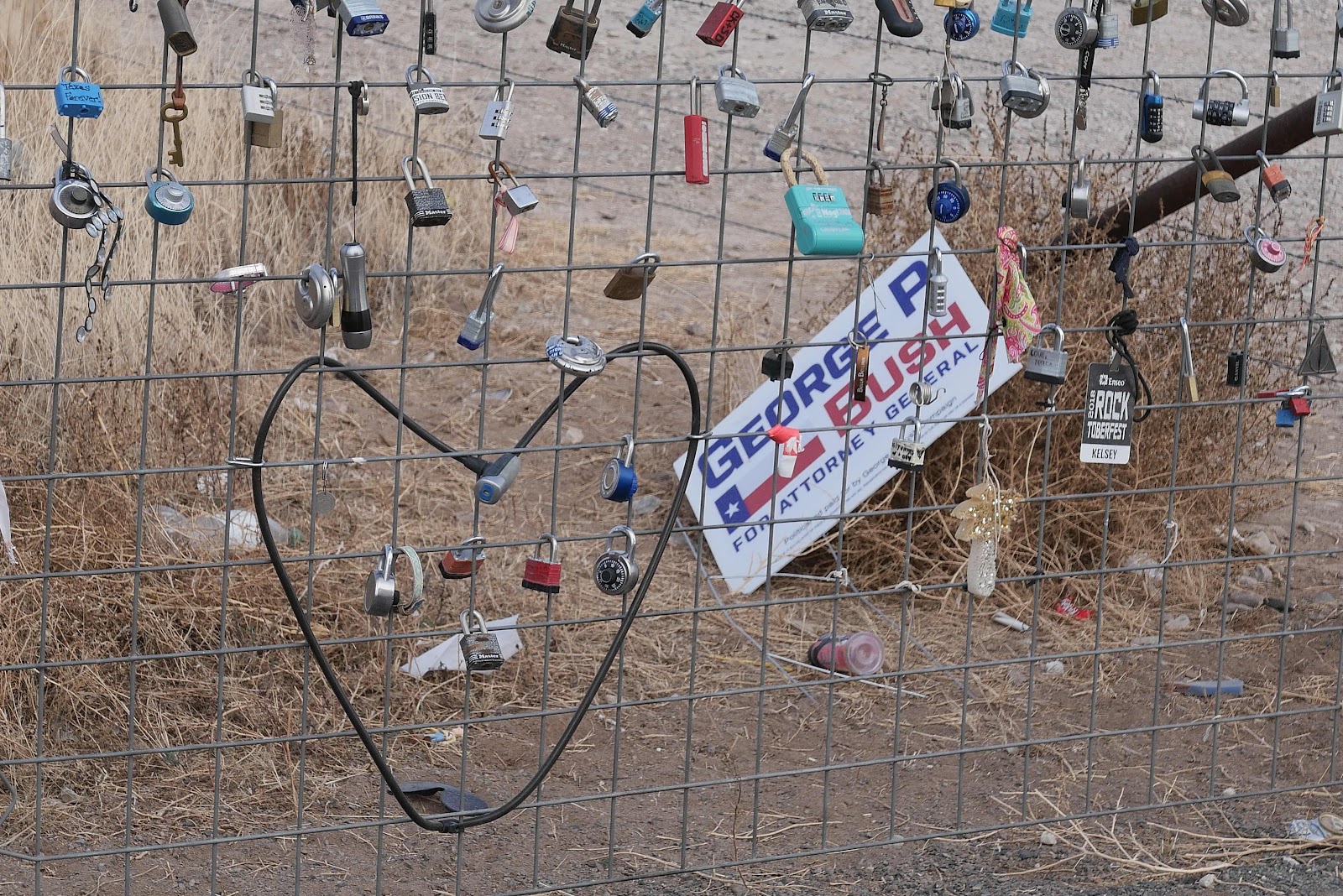 That's me having fun on a blusterous cold winter day. Rusty suitably enough was ignoring me. He preferred the art. Not bad for a selfie dunce. 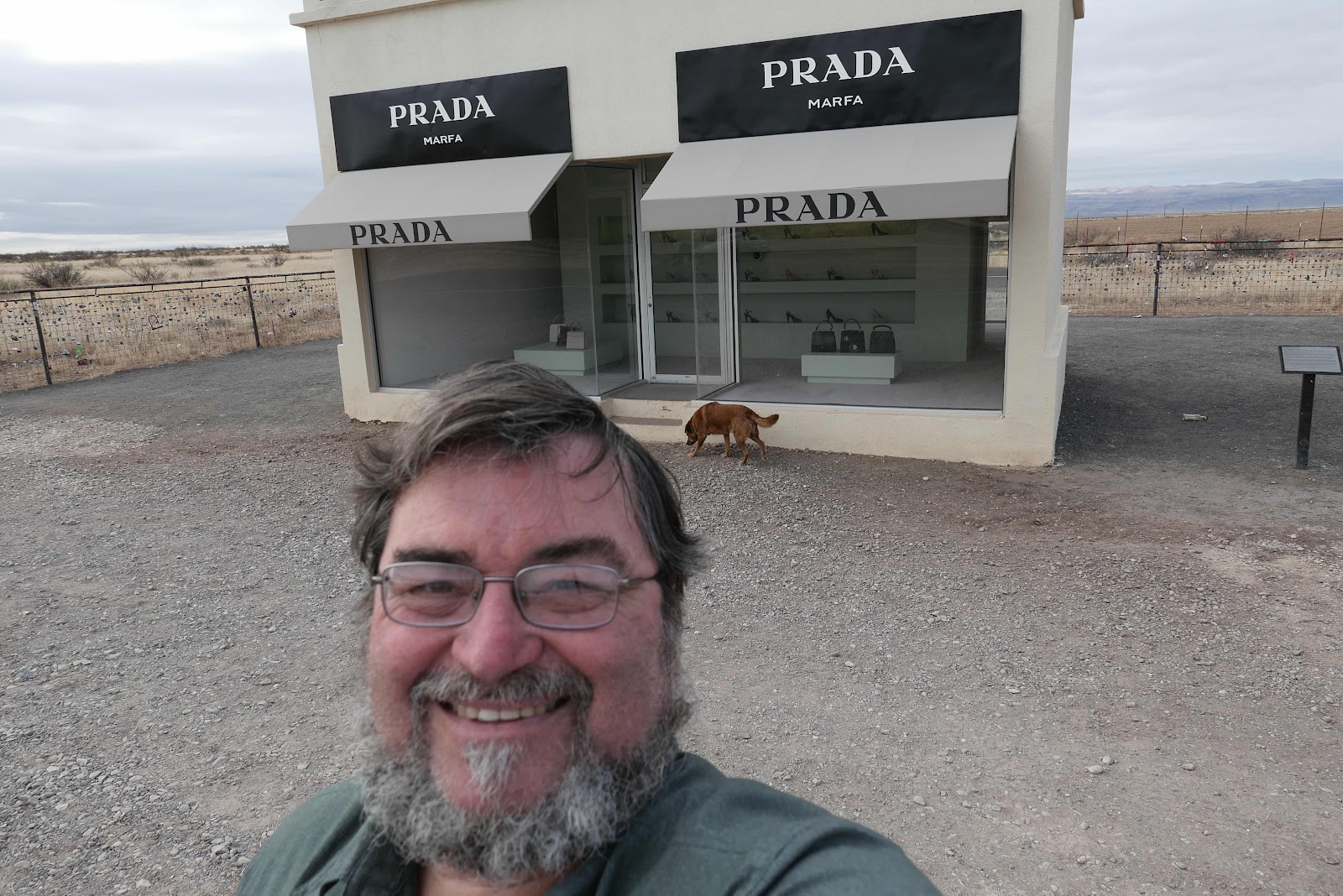 Boo hiss. We had to get on I-10 at some point and join the flow of eighteen wheelers carrying vital Chinese made Christmas stuff back and forth across the land. I asked my wife what she wanted for her birthday (we pretty much ignore the commercialization of Christmas) and she looked startled when she realized it is fast approaching January. Then we passed the "Mountain Time Zone" sign, our clocks went back an hour automatically and the topic of conversation changed. 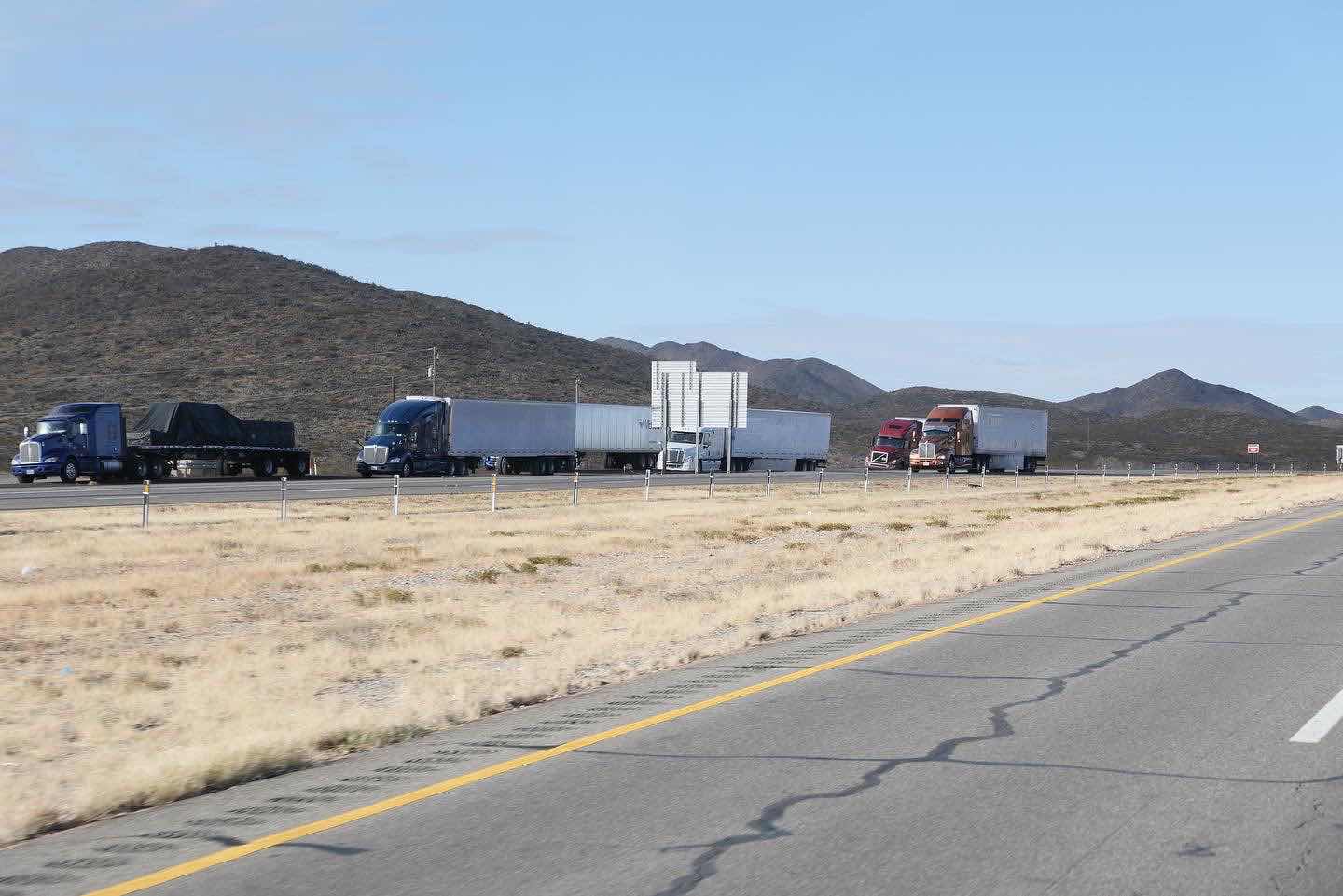 Draw a veil over El Paso, an important commercial hub and industrial city whose sole attribute of outside interest is the fact you can look over the river from the freeway and admire the slums of Ciudad Juarez within a stone's throw of your expensive bourgeois van. Which paused for a second while we took a hot shared shower ($14) at the Love's Truck stop just off the freeway. What a lovely thing a prolonged boiling shower is after a week of rugged desert living. I don't think wipes cut the muster when it comes to cleanliness but there we are. 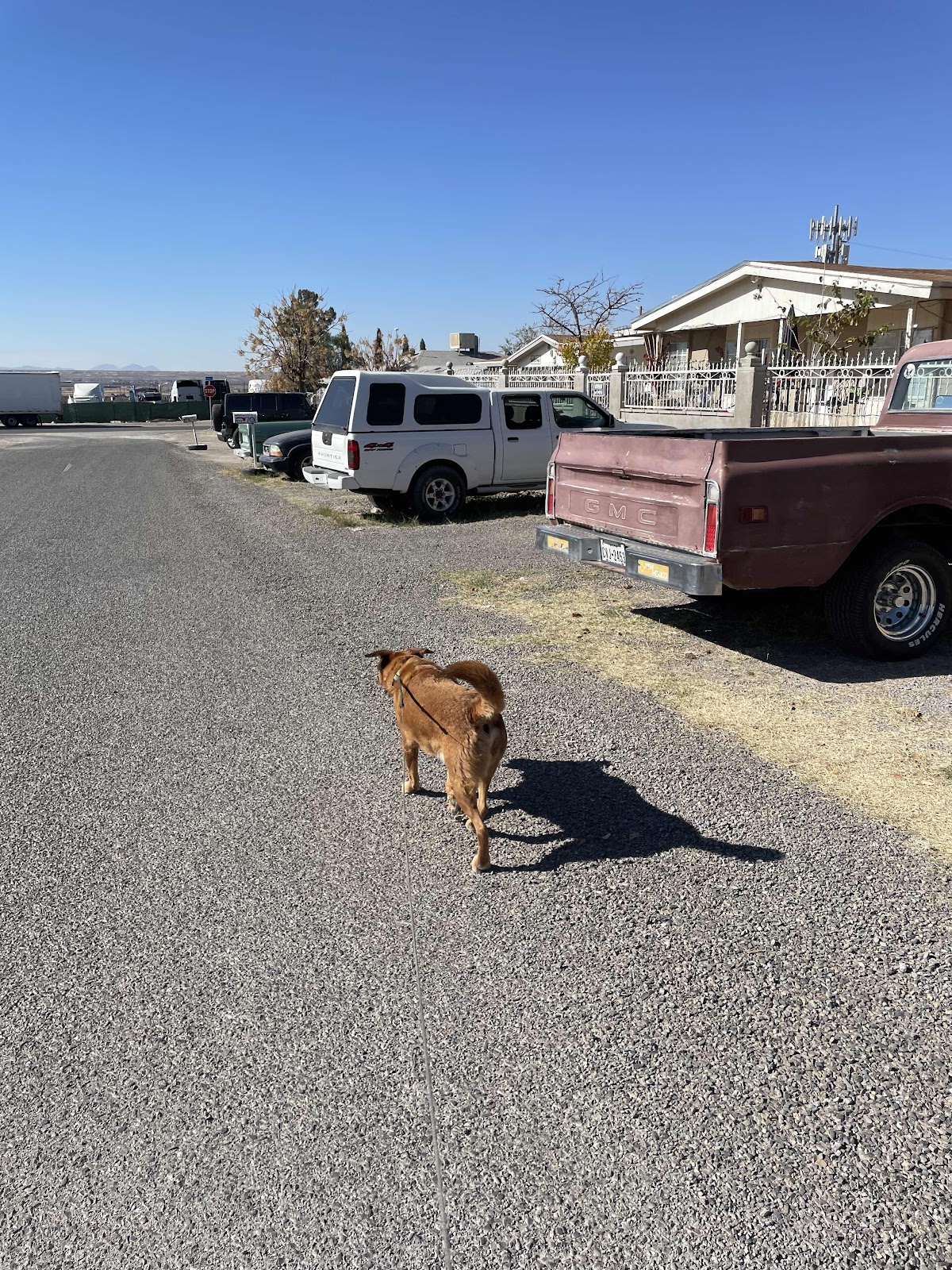 While Layne indulged I slipped out and took Rusty for a walk in a neighborhood where local dogs don't get out much apparently. They found him annoying especially as he ignored them. 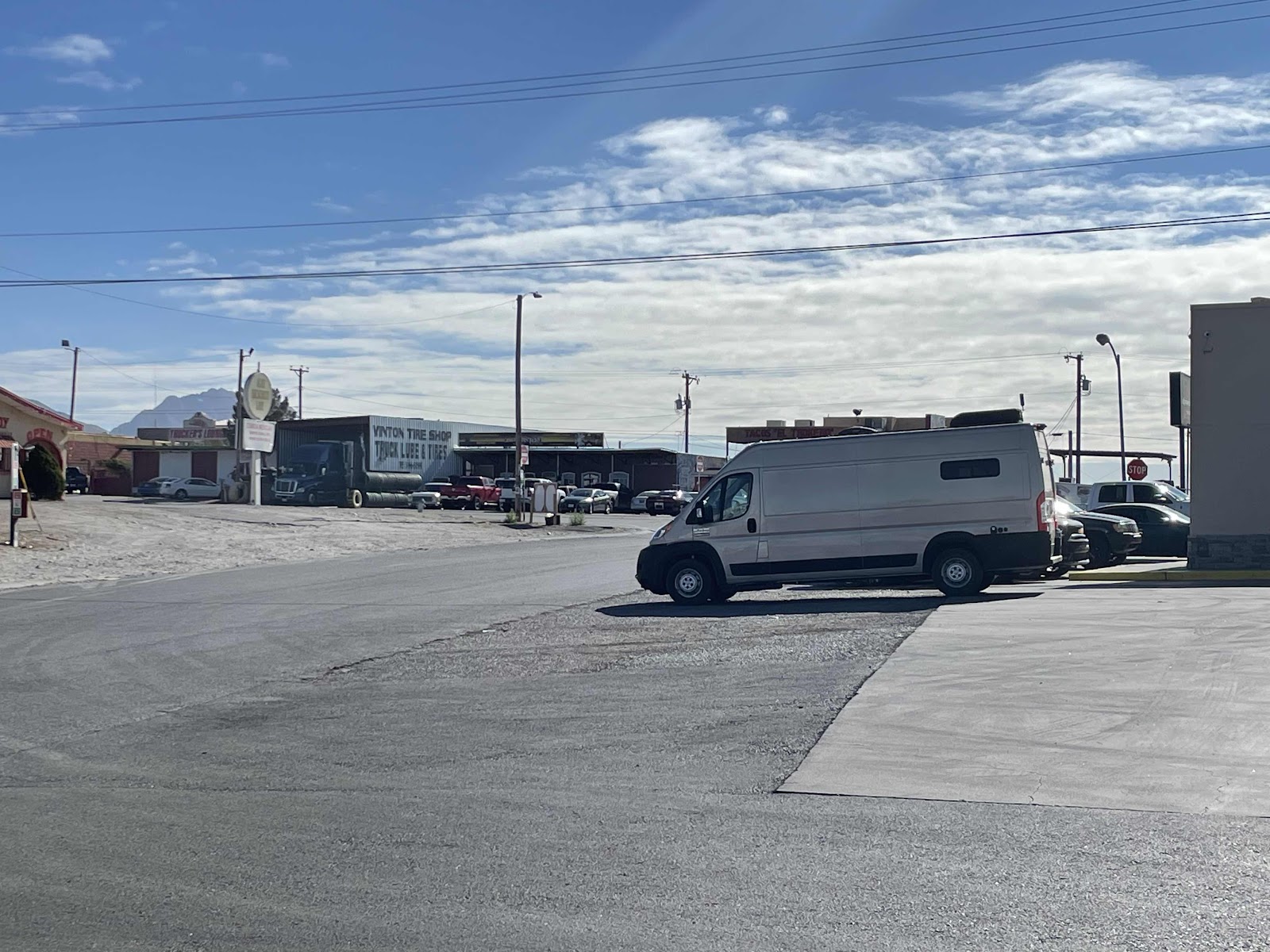 A side note here about pre-Christmas travel. The alert and patient reader will have noted my remark about long lines at the border in Presidio as Mexican Americans return to Mexico for the Holiday loaded with cheap US merchandise. 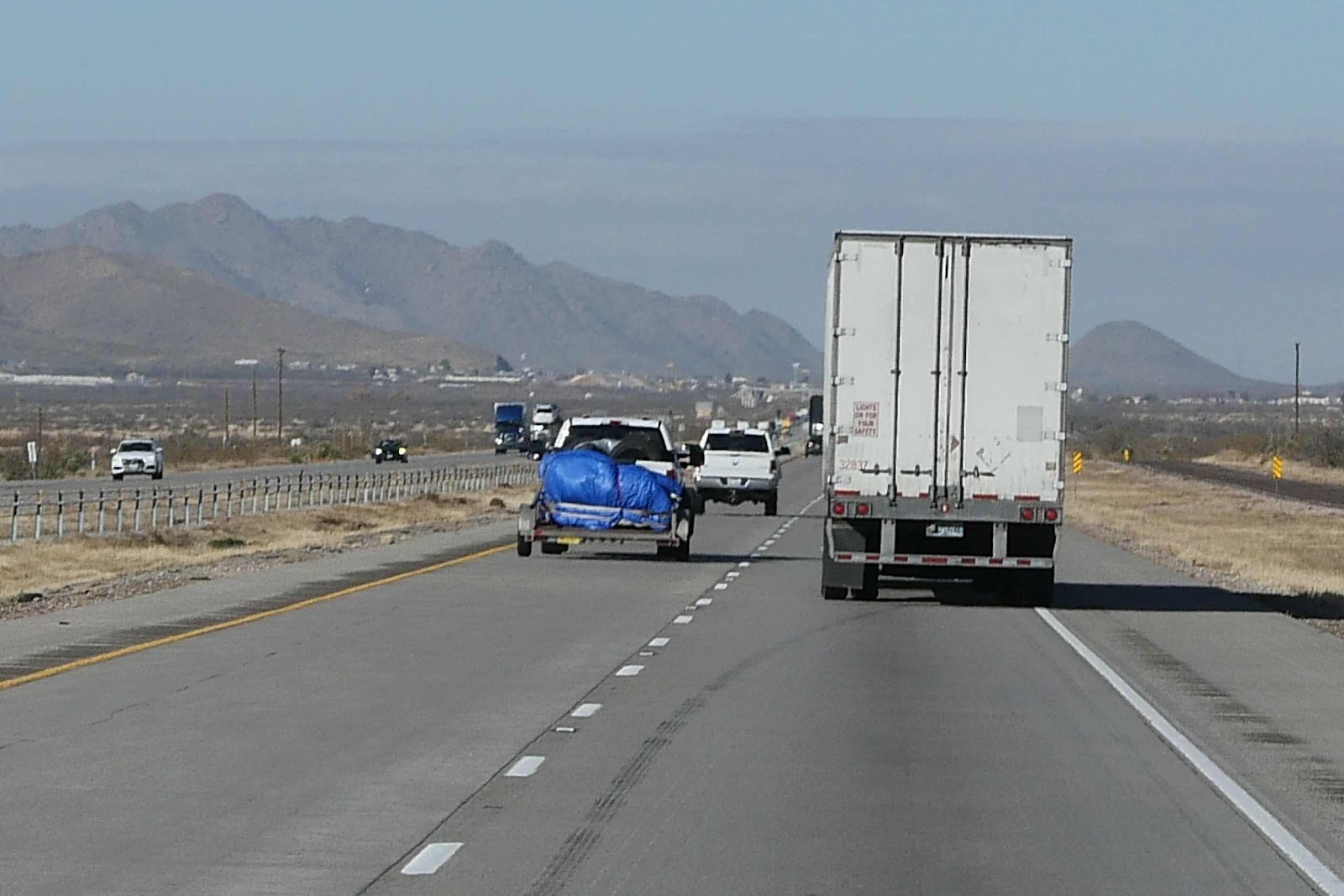 We saw "trockas" everywhere on the freeway that closely resembled the loads borne into Mexico at the border. 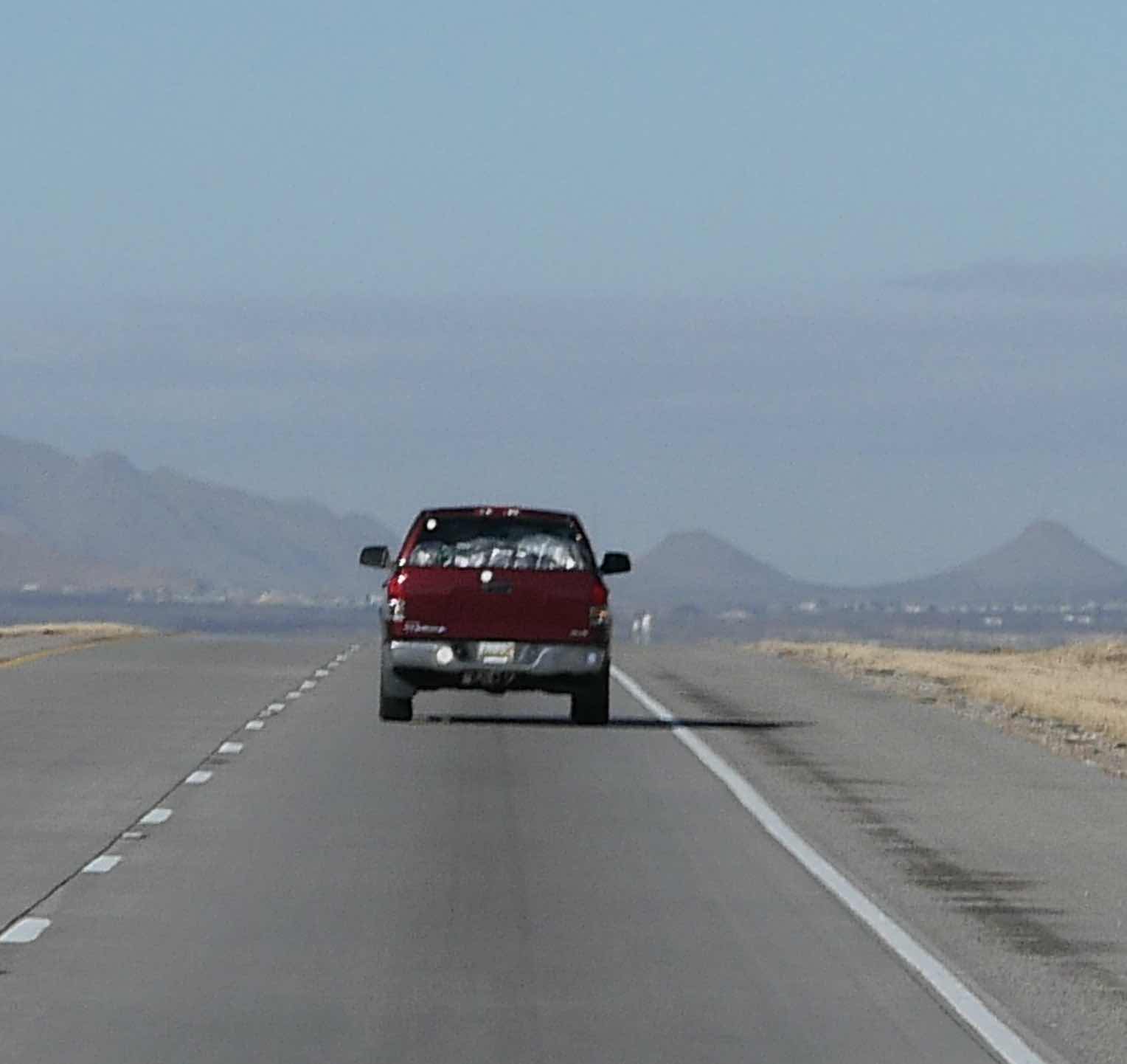 It's worth bearing in mind the border around here is closer or further depending on exactly where you are but it's never far away. 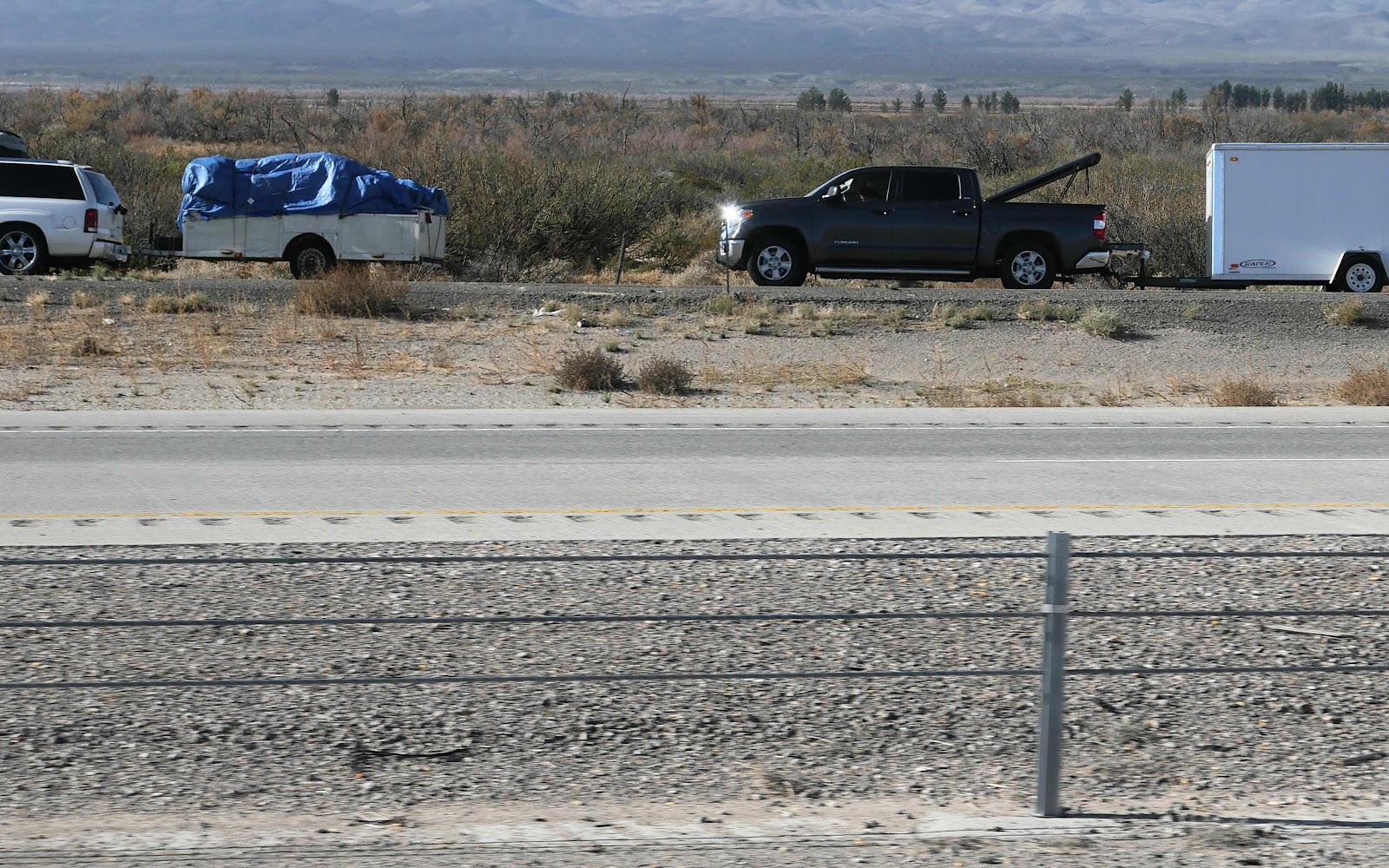 And then we started our final approach to Las Cruces, New Mexico, and its small suburb called Mesilla, a town I had for some reason wanted to return to after our only previous visit some dozen years ago with the late great Cheyenne of fond memory. 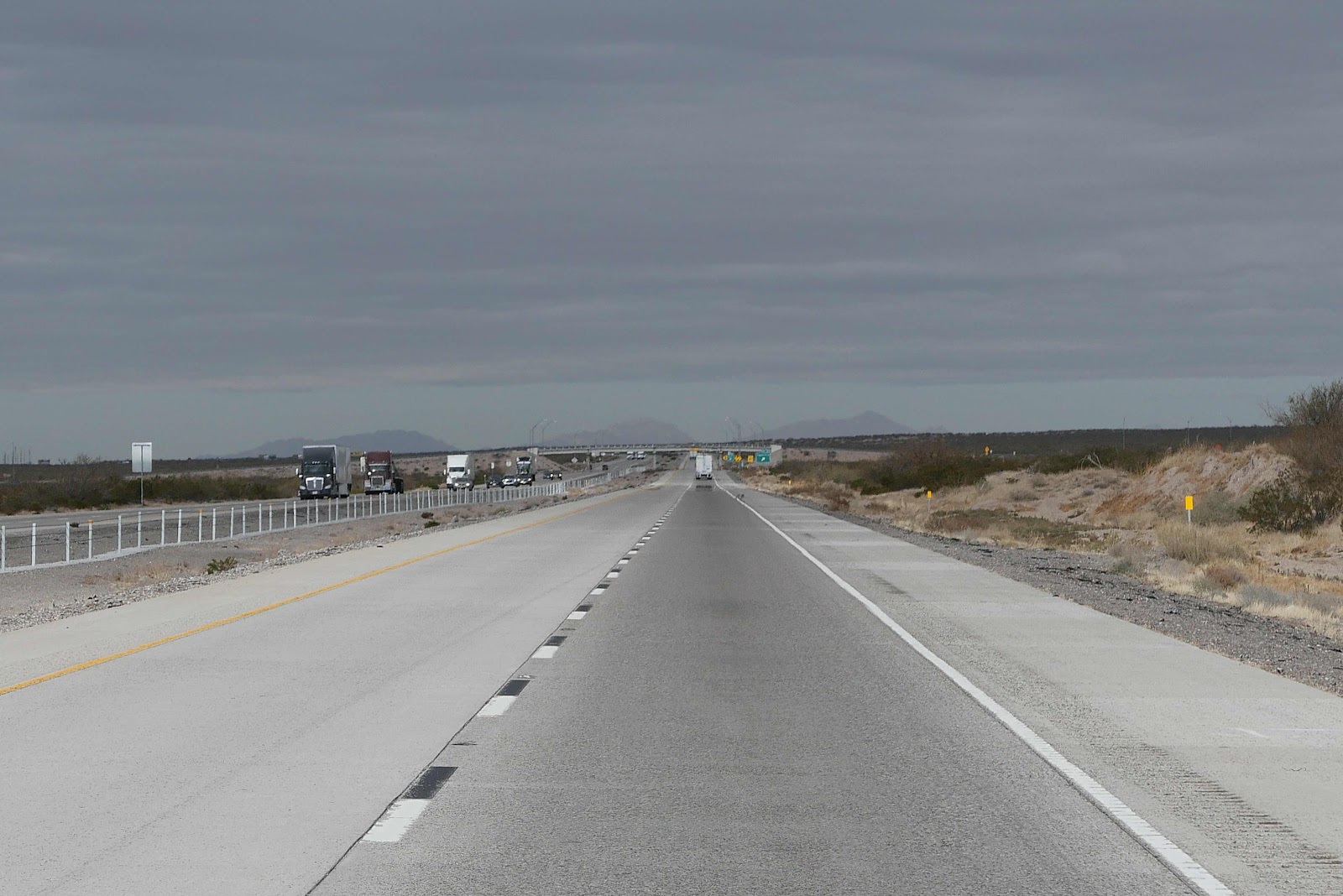