"It is difficult to get a man to understand something, when his salary depends on his not understanding it." 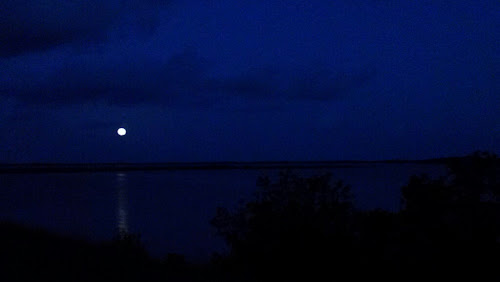 There is change in the air in America, and as odd as it seems Key West is finding its place, if not at the forefront, at least in the front of the second rank. Most recently Judge Garcia ruled Florida's marriage laws are unconstitutional by virtue of prohibiting same gender unions. Other judges across the state have found their gonads and are lining up to put themselves on the right side of history. So far so good. 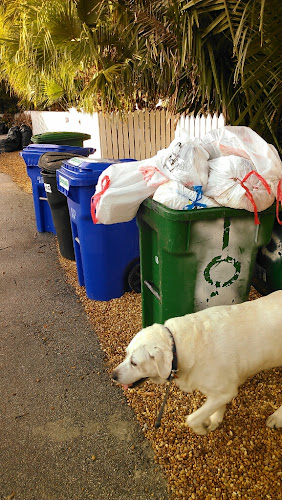 In a recent interview on conservative radio show Faith & Liberty, U.S. Rep. Michele Bachmann (R-Minnesota) warned that the gay community ultimately wants to "abolish age-of-consent laws, which means we will do away with statutory-rape laws so that adults will be able to freely prey on little children sexually. That's the deviance that we're seeing embraced in our culture today."

That this sort of arrant nonsense is being spread by an elected member of Congress puts Key West's thus far Quixotic gesture among the ranks of either the heroically cutting edge or politically suicidally inept. As much as Northeners like to argue that Florida isn't truly part of the South I would argue that it is. Not perhaps in the blue enclaves of Miami and Fort Lauderdale but if you check out the rest of the state you will get a different perspective. Florida is a melting pot similar to California and just as ungovernable and unpredictable and like the Golden State it will have a regional impact on the anti-progressive states in the South. Starting from Key West's revolutionary judgement favoring the astonishingly revolutionary idea that marriage is good, and good for everyone. 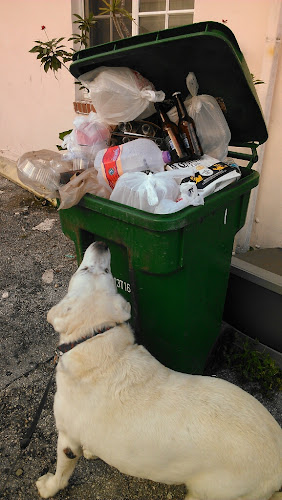 I have been married (to a woman) for twenty years and our California marriage has been accepted as fact by the State of Florida as required by the US Constituion. Marriage is a civil rite which may also be celebrated by religious groups, but the civil rights it confers are absolute and far reaching. Marriage changes the relationship of the family inasmuch as the person you marry becomes responsible for you, in place of the family members you were born to. I see no reason why sclerotic religious groups that cannot bend their minds enough to marry same gender couples should be required to do so; indeed that would be illegal by the same Constituion. By the same token these religious groups denying other religions or civil authorities the right to marry same gender couples seems not only illegal (as Judge Garcia in fact ruled) but also immoral. 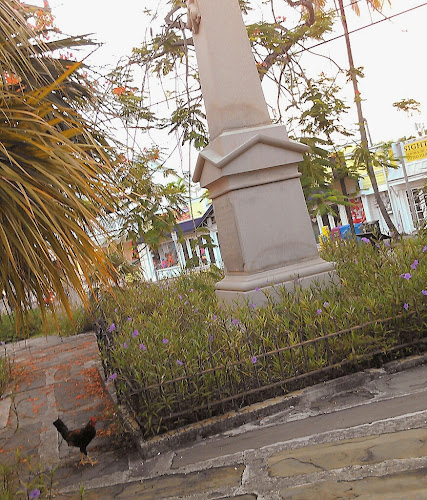 I read a letter in the Citizen fulminating against this idea of same sex marriage becoming law in Florida over the will of the majority of voters (I told you Florida really is part of Dixie). Proof enough I suppose that the author was sleeping during civics class in school. The courts' job is in part to defend the rights of the minority and ensure them equal access to the law, as explained by Judge Garcia. Which would be an astonishing concept to that dolt who has forgotten any of his nation's history he may once have known. If we had had to wait for the majority to vote down slavery we'd still be waiting. 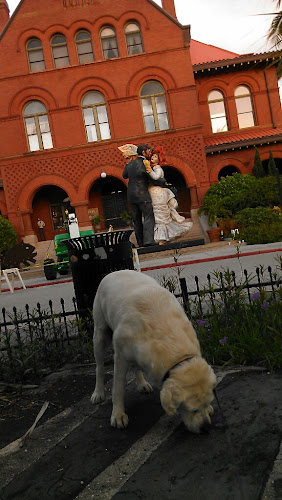 But then again slavery is different they tell us, and the Southernmost City's reaction to it was also. Key West was nowhere near the front line on that battle. A fortuitous act (occupying a Fort Zachary) by a quick thinking Union officer stationed in Key West kept the important port city in the Union throughout the war but city leaders were not in the least abolitionists or pro-Union. In point of fact Key West has always been a military stronghold, and far from the popular image of debauched pirates that populate the tourist mythology. Commodore David Porter was given the job of suppressing piracy in the Western Caribbean and he did a fine job of it with innovative tactics and an iron will. Such was his devotion to duty he pissed off his superiors and ended up in exile for a while by joining the Mexican Navy. Not exactly the laid back image party town promotes. 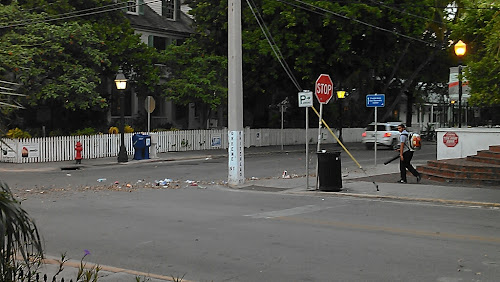 But that's not how Key West sells itself. Talking with friends we briefly mentioned the lack of vision in the city, hoping perhaps for better in the election coming up. There is though that same fear of intervention that permeates a lot if southern states and that leads to a free market weighed in favor of wealth, and bad taste. 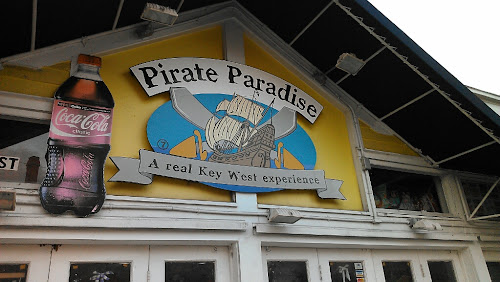 There is much lamentation about the conversion of the supremely local, eclectic Fast Buck Freddie's into yet another CVS store (minus the pharmacy they promise) in a town saturated not only by CVS and Walgreens but also by other national chains. There are ways to favor local business but not in this town. Duval Street is ideally placed to be a dynamic live/work active shopping downtown but instead it is a place most residents avoid like the plague that it is. City workers struggle to clean it up every morning but the smell of stale beer permeates everything, the sidewalks are crusty and fresh paint is an unknown concept. 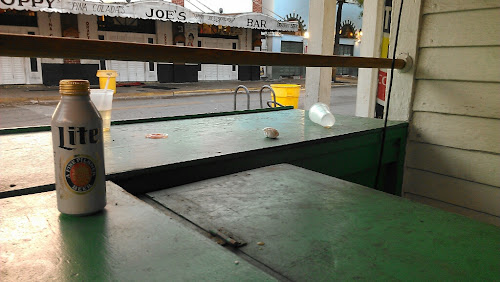 Important people in the city make money from this degraded state of affairs and as Upton Sinclair noted they won't change a thing. It is tempting to imagine a city where urban planning might direct visitor money to a less alcohol fueled focus, but when proposals to create a pedestrian only zone were bruited the idea was shot down. Not because it might fail, but because the merchants outside the zone thought it might be too successful! This isn't the Conch Republic, it's Ruritania. Though where we might find right minded people ready to set civic standards beats me. 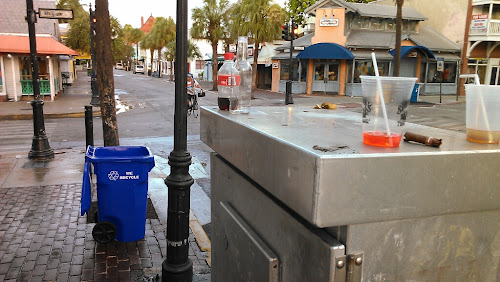 The thing is the current mindset of anything goes makes money, property values are absurdly high, such that a modest storefront on Duval commands a $30,000 a month rent. Which leads one to wonder how many Crocs does the Croc store sell to make the rent, never mind the other fixed costs? Upset that Apple cart if you dare! Who needs a pedestrian zone? Carts draped in funereal plastic do not apparently violate city aesthetic codes: 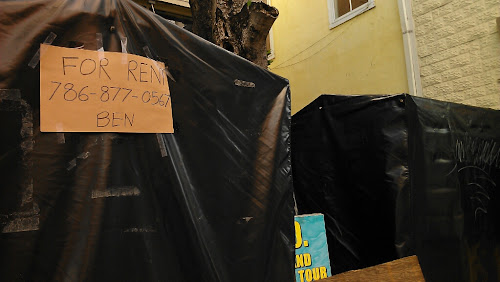 I love these inspirational quotations that crop up on Duval Street as well as all over Facebook. So easy to "share," so hard to live up to. Jesus had his head in the clouds and his feet on the ground and the peanut gallery happily gave him up to excruciating crucification in favor of giving the crook Barabbas his freedom. I don't doubt the same would happen today even as people mindlessly post these uplifting hopes on their public pages. 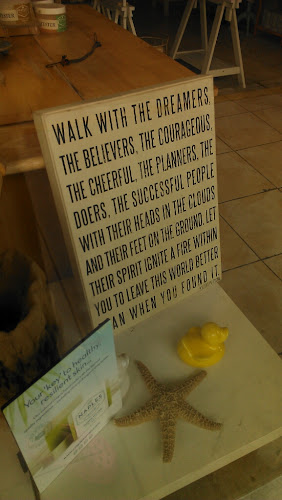 I wonder if Duval Street can get better or is it just destined to be party town forever?