It's called The Pines, a clump of Australian pines with picnic tables and usually a few aimless clods spending their entire winter day here next to the airport. I saw no "campers" so I stopped to start my cunning plan to wear Cheyenne out for the day. Chickens run wild and they showed no apprehension when I loosed my fearsome hound amongst them. She prefers her prey dead and smelly. 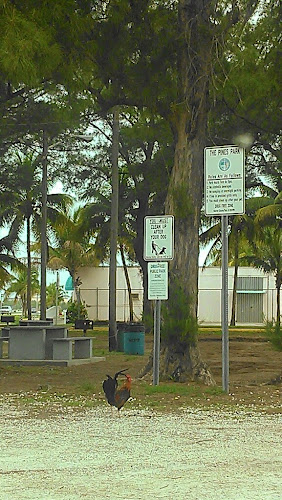 The plan was to spend a few hours in Key West exposing my eager dog to the smells and excitement of the big city. I enjoy watching her pass out at home worn out by the surfeit of activity and emotion. She tends to exhibit temporary heat exhaustion by plunking herself down wherever she can find refreshment. 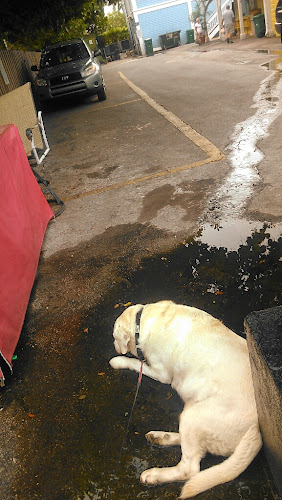 This prime spot was at the north end of Duval exactly where one might prefer to drink one's bah water. Cheyenne is a martyr to summer's heat and humidity. In winter she'll stump along for three hours without pause but in June it's the start of her slow period. Which gives me a chance to stand around and admire the peculiarities of the latest in cycle fashions. Tires this big put one in mind of snowshoes. In Key West. 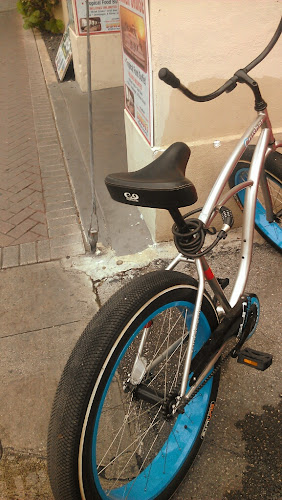 Tour buses have reserved parking at Clinton Square along Whitehead Street and it's here one can admire their sheer bulk towering alongside the little houses. 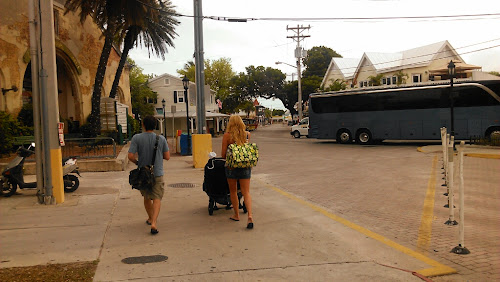 From my position they seemed to block the view worse than the cruise ship tied up at the Westin Pier. A person could get to feeling wedged in around here... 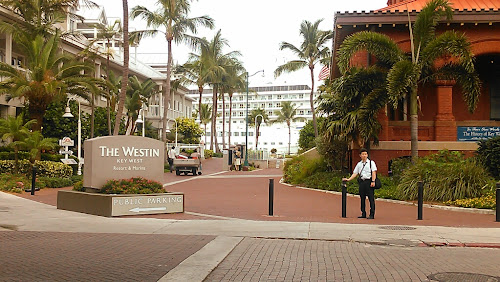 Passing the courthouse with my dog I saw an apparent Vespa theft in progress. I thought my P200 was supposed to be undergoing renovation in Allentown..? I got a message on Modern Vespa from some dude who apparently has a white P200 in town. Modern Vespa : Scooters Originali 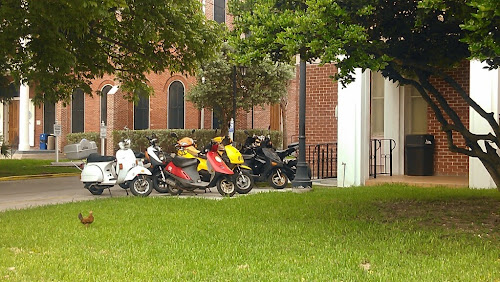 The photo he posted didn't show a rack and top case like this one. Perhaps now here's a third vintage Vespa in town? 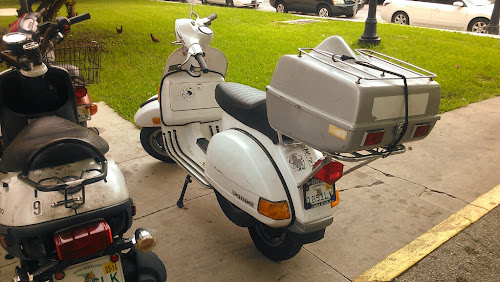 Cheyenne wanted to keep going Soith on Whitehead Street but I put a stop to that. I lime t give her her head when we're out walking but sometimes she likes to overdo it so we turned east on Fleming. I liked the new parking ticket metering in front of Fausto's Food Palace. Faustos Key West | Home. I've never really noticed the street sign explaining the lane separation so who needs it? 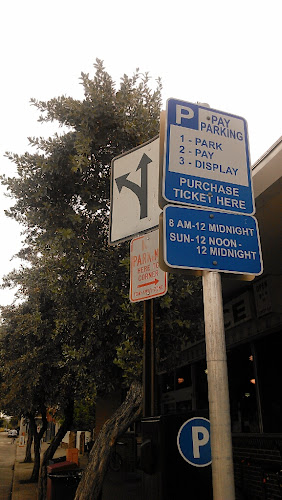 I dragged my hound due north on Simonton and she came willingly so I guess she was figuring it was time to cut the exploration short. The Methodist church does a nice job of providing shade for the living and the dead. Check out this blog for daily pictures around the Keys with my irritating commentary replaced by smiley faces, exclamation marks and endless effortless good cheer. Key West’s LONE Roadside Grave | Shoestring Weekends Blog. 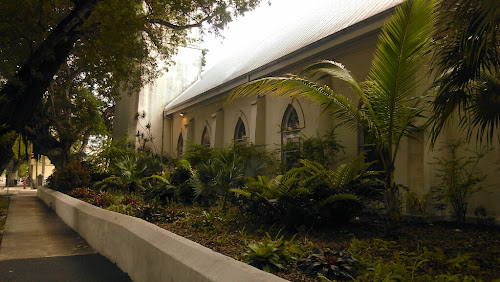 I read Dale Carnegie's book years ago and enjoyed the central premise of pretending to be interested in people to make it easy to sell them shit they neither need nor wanted until you showed up on scene. That and Death of A Salesman by Marilyn Monroe's husband along with Amusing Ourselves To Death by Neil Postman convinced me I had no place in my life for a salesman's patter. Cheyenne couldn't find a puddle here in the shade so she took a dust bath instead. Clearly I was going to have to get the shampoo out once I got home. 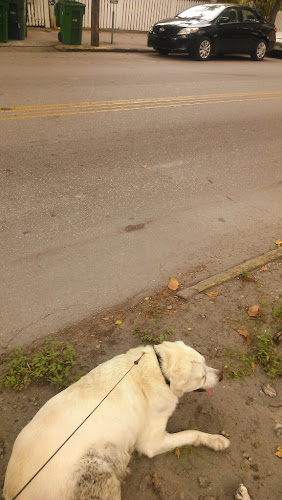 I had called it right by heading back to the car before Cheyenne thought she was ready. Three blocks beyond the church the we were again, in pause mode. 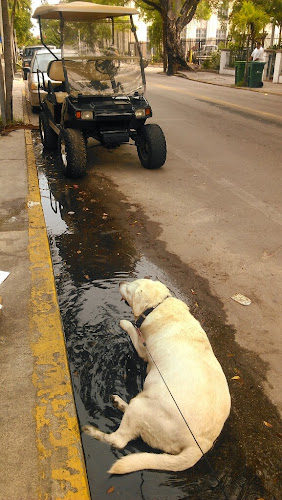 Here I had the joy of reading this bit of arrant nonsense. What in the name of all that's holy is an "Impactful Presentation?" I might have a better sense of these "core values" posted for all to read if they made any mention of their workers ( 'team members' or 'associates' in the modern meaningless jargon of mindless middle management), those would be the poor sods actually entrusted with EXCEEDING EXPECTATIONS... Barf. 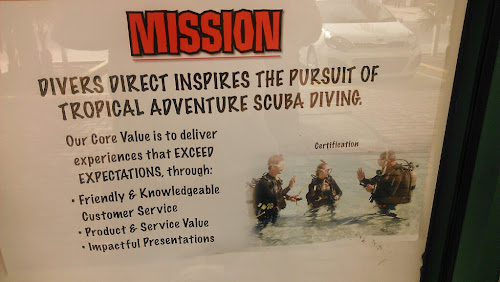 Now this I liked: fiberglass resin holding a metal car fender in place. My wife and I after years spent traveling by sail boat discovered that when things get repaired, said repairs never tend to last. Everything is repaired "for now" against the day they will break again. We also have learned to enjoy cruising solutions to various breakages. Bailing wire duct tape and fiberglass resin make the best cruising solutions to repair stuff "for now." This repair is the perfect cruising bodge and I love it. 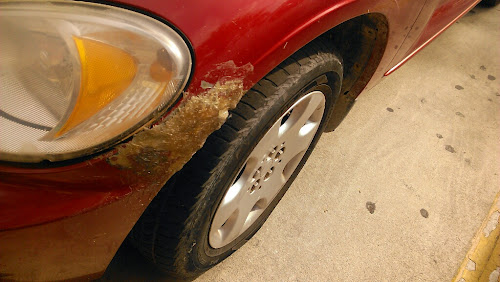 I've photographed this bodge previously. Why even the most drunk of visitors would imagine that a gas tank, even one likely no longer in use, is a garbage can. Oh but they do and the stuff crap into instead of walking a further fifty feet to a city garbage can on the street corner. 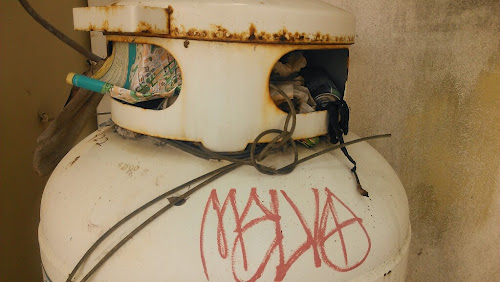 Oops! Heat stroke imminent...but by now the car was just a few steps away and Cheyenne was actually just trying to stretch out the walk for as long as she possibly could. 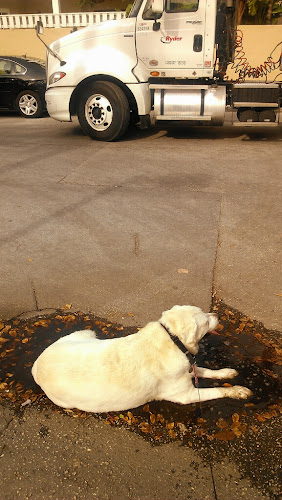 By the time we reached the end of the street Cheyenne realised there was the puddle to end all puddles and she lumbered in. 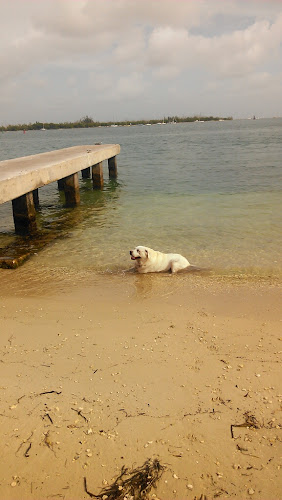 Standing there i noticed a small group of men looking serious and waving their arms around and pondering a future that looked like change might be in the air. That there was a passed out residentially challenged citizen right in front of them summed up the challenges facing tourist development in Key West. 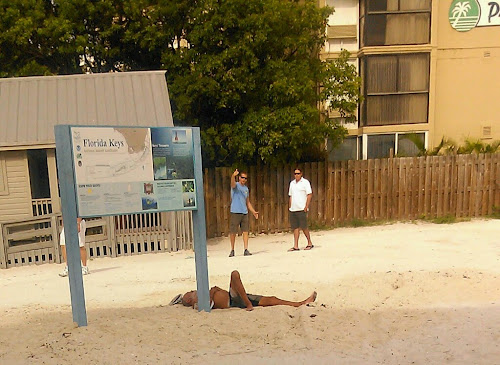 The good bit about Key West was out there in the harbor steaming by. Tourists having another great day on the water in Key West. 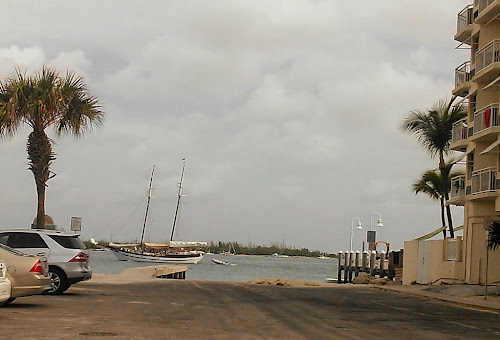 An exhausted dog was just a bonus for the rest of the day at home. 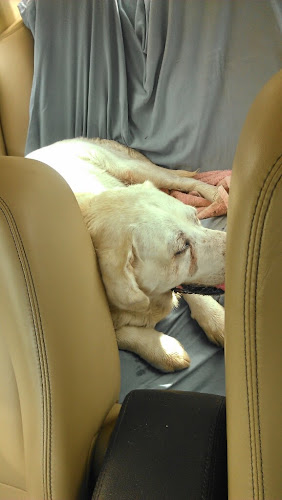