Riding A Jet Ski On The Freeway, And Other Adirondack Stories

We awoke in Plattsburgh New York to sunny skies and a cool breeze off Lake Champlain, and it was as though we had left the rain and clouds of New England behind us, on the eastern shore of the lake. Jack Riepe has been nagging me since I first met him years ago to visit the Adirondack Mountains his spiritual home. Today, in the words of the late Mel Fisher, was the day. 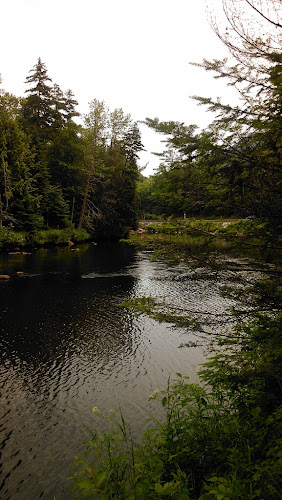 I am sure I'm late to the party but the Adirondacks are lovely so how I've never previously seen them I don't know. Cheyenne was delighted, but seemed to feel a dry riverbed might be more picturesque. 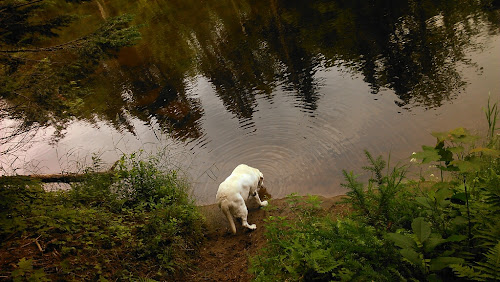 I'm not sure the winding road to a Lake Placid rates as "wilderness" but we found not much traffic, gorgeous roads and incredible views. 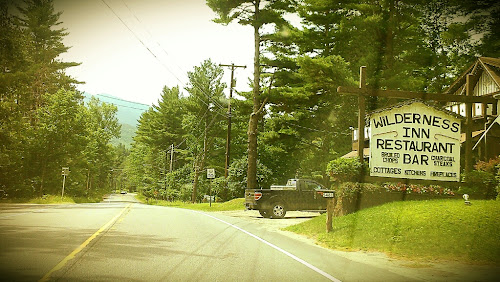 The trails were lovely, empty, and gave us perhaps a touch of the much sought after wilderness. 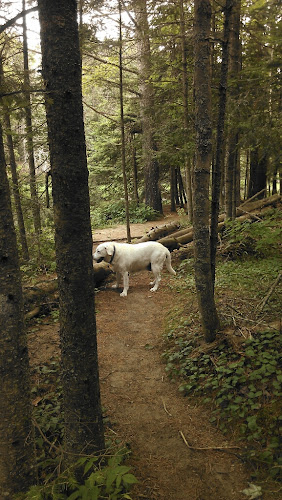 After decades spent in California one starts to think that any hump lower than 7,000 feet doesn't count as a mountain. As a result the entire east coast is written off by the California mind used to climbing the Sierra Nevada and getting hungry in Donner Pass. But the Adirondacks are every bit as good as any ten thousand foot pass. My wife caught the artist at work. 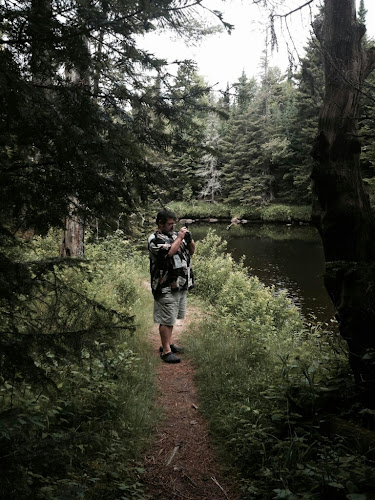 The towns are small, intimate and offer old fashioned roadside refreshments. We stopped for frozen custard, Cheyenne rolled in the grass and in the distance we could hear kids playing on the lake beach. This is America from the good old days that probably only existed in our imaginations. 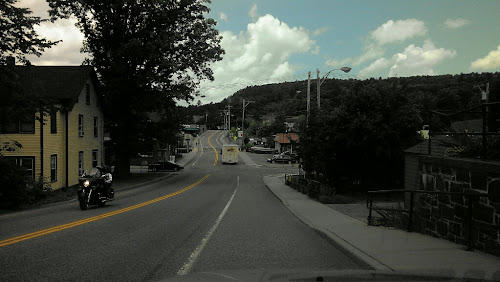 While I'm in a mellow mood let me point out that New York also offers a cultural advantage that travelers through New Hampshire and Vermont can only dream of: pull outs. Roadside parking, vista points, all these are an unknown value in the minor states. New York gets this. It's a state filled with invitations to stop and savor the beauty of the Empire State. We spotted some superb views up New Hampshire rivers but the reason you see no pictures here is because there was nowhere to stop on narrow winding roads with no shoulders never mind pull outs. 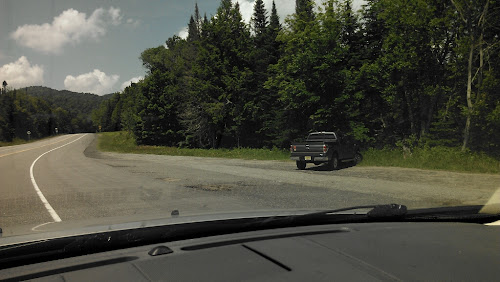 Saranac Lake gave us a lunch to remember, as we bypassed the hot dogs and burgers lining the lakes. 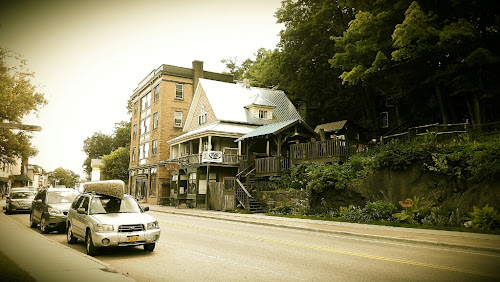 A reviewer compared this place to something out of Northern Exposure so naturally we were hooked and Eat and Meet Grill did not disappoint. 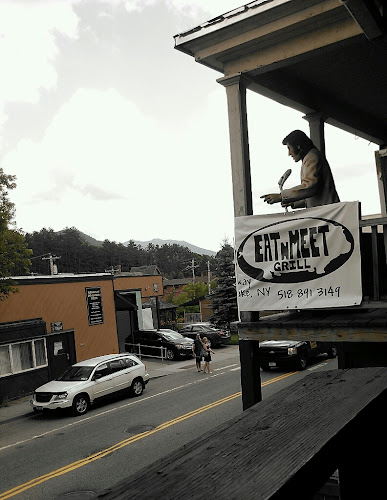 Funky inside delicious on the plate, tuna, a spicy Jamaican beef patty Dion's could learn to emulate in the Keys, and poutine which we didn't get to taste in Canada. It was proper with cheese curds, brown gravy and hand cut fries. The apple crisp for pudding was perfect. 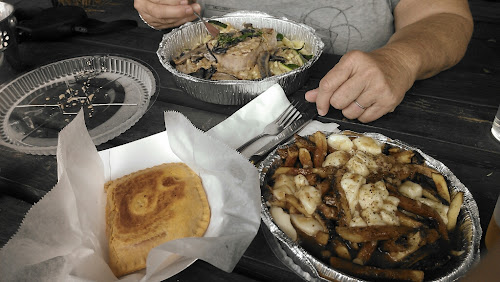 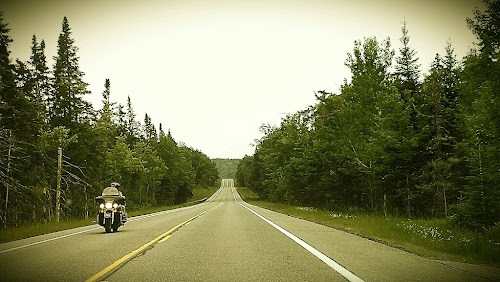 Then when we descended at long last from the mountains we got into the plains that lead to Syracuse, our destination. However there was a bit if an obstacle and this one came from the ski. We were on the freeway in farm country when a huge black thunderhead appeared, stretching right across the horizon. Lightning flashed the length of the thing, a long black ugly cloud dropping half a dozen lightning bolts at once. We actually pulled over and called Steve who was in his weather command center. Which coincided with the moment Layne's cellphone went off with a tornado warning. WTF? I was seriously thinking we should go back five miles to the La Quinta we passed instead of making forty more miles to the homemade dinner that awaited us. 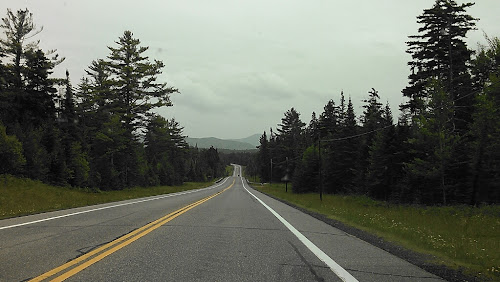 Steve reassured us the massive thunderhead, which he admitted stretched to Pennsylvania, was quite thin and we should be fine. Er...OK... And as we pulled out of the rest stop the wind struck, rocked our fully loaded car, and swept thick heavy rain horizontal across the road. Hmm... I was hoping Steve was right and this monster was narrow and we'd be through it quick. Meanwhile it was horrendous, as bad as anything I've driven through in the Keys, thick slashing rain, zero visibility and a whole bunch of cars that didn't know what they were doing. I pressed on into the rain and wind on the theory that the sooner we were through...the sooner we were somewhere better. Cars were pulling over, others were trundling along in tight groups like ducklings waddling after their mothers. That's the best of all so when the leader stops everyone crashes into each other. I focused on vehicle avoidance and kept one eye on the stripe at the side of the road.

Eventually we got out of it of course and then we got stuck in stopped traffic. Someone had wrecked. Bummer. We crawled slowly forward for what seemed forever. The road was wet and covered with leaves. The blue lights kept us out of the right lane but we could see tumbled vehicles, a trailer and a jet ski incongruously right side up pointing straight up the road as though the rider had just stopped and stepped away. Leaving us all to figure out how to get round it and home. We picked up speed to get past the rubber neckers and at the exit we came across a speed limit sign lying in the roadway. Oops! Missed that, dodged a branch, raised a ruckus of fallen green leaves in our wake. 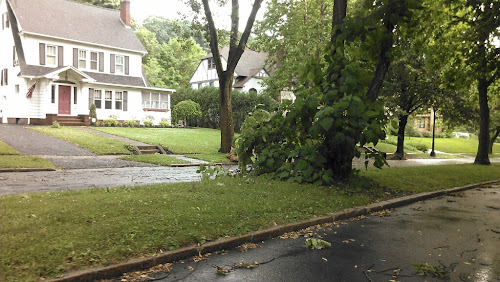 We were lucky. Four people died near Syracuse that afternoon, one man with his dog when a tornado lifted a house off its foundations and dumped it next door. Leaving his vehicle intact in the driveway. 500,000 people lost power. We were fine: 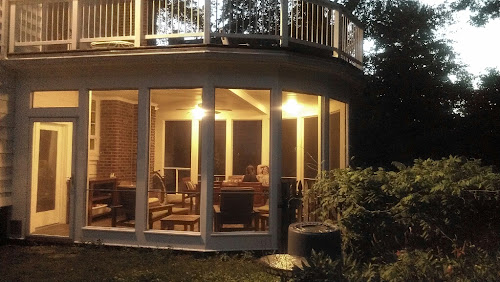 God loves fools and drunks and I am not, despite my place of residence, a drunk. 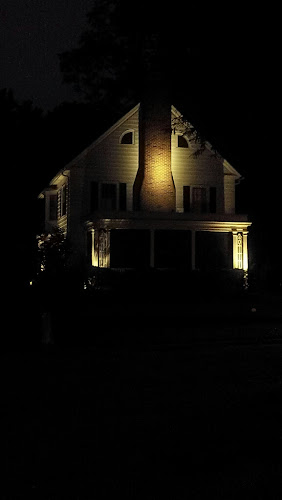 Cheyenne and I had a lovely evening walk in a quiet wooded neighborhood, damp from the rain, cool from the breeze. Perfectly gorgeous. And so to bed.

Posted with Blogsy
Posted by Conchscooter at 7:01 PM 3 comments: