The big debate a few weeks ago was a proposal to allow boat parking on New Town streets. What a spat that idea created between Old Town and New Town residents.

To someone like myself, removed from the whole debate as I have room enough on my Lower Keys lot to park my tiny boat trailer, there seems to be room enough also on these streets to park an unsightly boat. As far as I recall the proposal went nowhere in a welter of recrimination.

No matter how much off street parking one may have it frequently seems the is not enough. Big foot in New Town:

This flower is of course a mystery as lovely as it is.

And I never do manage to remember their names.

I liked the look of this useful electric outfit:

For all that New Town is relatively modern the trees and greenery still make for a distinctive neighborhood.

- Posted using BlogPress from my iPad
Posted by Conchscooter at 11:50 PM 3 comments: Links to this post

My wife would love those purple shutters.

This picture lends the lie to the stereotype of the dog and the hydrant. Cheyenne, the white blob, strolled straight on by without a second glance.

One day my mailbox will be lush with bushes all round. Till then I have to admire those belonging to others.

I think aliens are coming and they've marked their landing spots with green circles.

I am not that fussed about hurricane fencing but my wife doesn't like it. I had thought we might need some when we got Cheyenne to keep her off the street, but she doesn't start out of the yard, this amazing dog, so the issue never came up. Mind you the fencing isn't really that pretty so I might be forced to concede the point to my wife...

Here's more of that ivy stuff that apparently grows straight up walls.

And a mysterious could of chain round a power pole's base. It had a padlock but no apparent purpose.

This permanent rainy season must be over soon surely?

Crane Boulevard on Sugarloaf Key is gated beyond the residential area and a sign says it's part of the National Key Deer Refuge even though as far as I know the are no actual deer, yet on this island. There'd are people with guns though, as the refuge sign testifies:

Cheyenne got into some heavy sniffing near the gate and my projected walk up the closed portion of the paved road was put on hold.

It isn't as interesting as it might sound, Crane Boulevard. There was a plan a few years ago to tear it up and let it revert to nature, a plan that met massive resistance from residents and users. Such was the protest by walkers and cyclists that all such plans were dropped.

I have cycled to the end of the road but honestly it isn't that much fun. It's just mangroves and there is nothing much to see and there is no shade. Yet people love love to cycle it.

I have other trails I prefer, with growth and shade and a
little intrigue. Besides there are just too many bullet holes here.

Cheyenne finished sniffing and stood staring at the car. I got the hint and we left.

- Posted using BlogPress from my iPad
Posted by Conchscooter at 2:16 PM No comments: Links to this post

We walked for a while in bright sunshine and a breeze and when she seemed tired we repaired to the shade of a tree.

Fantasy Fest is always a hard week what with the sudden influx of crowds, big city traffic jams on the highway and drivers who have no clue where they re going or why. I always enjoy lying under a tree looking at the sky, but never more so than the
last week in October.

The pleasure of greenery overhead is so restful it will knock out a dog that has been running chasing her own tail.

I laid myself down next to her and looked up at the sky. It's been a nard week for me too, even though I don't work in the bars and guest houses.

Listening to Cheyenne snore is almost as peaceful as watching the wavelets break on shore, calm and regular.

By afternoon the rain was back in Seattle South under dark angry clouds.

I know snow is falling Up North and that must be horrible but what else does one expect at this time of year?

In the Keys it's supposed to be cool and dry with cold fronts coming and going not hanging around like guests outstaying their welcome.

We lounged around for a while Cheyenne and I, she snoring, me reading, until some visitor from Pennsylvania arrived with two cheerful dogs which he started shouting at, thus sounding like a sergeant major at a hippie gathering.

That's what I mean. These people bring money and too much stress with them. Bring the cash, spend lavishly and leave the stress at home. We left.

Posted by Conchscooter at 10:07 AM No comments: Links to this post

A Good Time In Key West

"It was less raunchy than I expected," said a disappointed Chuck. And perhaps the male nudity was lacking, though I wasn't paying attention.

Fleming Street was packed. We arrived at close to six o'clock at the Grinnell Street intersection and they were in full flow.

We aren't that organized when we line up to view but the spot was quite good, we decided.

We were looking at this lot trying to decide what they were. Mosquitoes? Genetically mutated ibis? Cathy finally settled on whitefly, an infestation of which has plagued certain plants this year.

This was obviously a jellyfish and quite spectacularly elaborate it was too.

Illegal alien? Harty har har. He should have been carrying a short handled hoe.

But the cop arresting him was up to snuff.

Another goldfish it seems.

A scooter can make a decent viewing platform.

No matter how grotesque the costume it's all business as usual when you meet an acquaintance in the street.

This spot was well outside the recycling zone. Lots of yummy Yuengling cans.

"We need appetizers," my wife said, rather imperiously. "Azur," I said in a moment of inspired brilliance. Cathy the show woman said she was inspired by all the costumes and is now contemplating her outfit for parade viewing from a friend's balcony. She wanted her picture in my blog, so here she is waiting for appetizers. 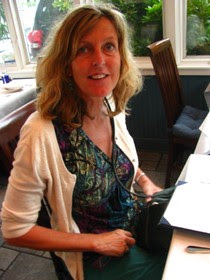 We had mussels and clams, chorizo cakes and gnocchi and lavender crême brûlée, a walnut chocolate cake and Azur's delicious sweet coffee. It was dark and raining the time we dragged ourselves from the table.

It was a long dark wet ride home last night with an exceedingly long line of cars trailing into Key West for some Aquatic Afrolics in town tonight. It should be quite aquatic as heavy rain is forecast. I'm glad I'll be at work!

- Posted using BlogPress from my iPad
Posted by Conchscooter at 3:07 AM No comments: Links to this post