Traveling North on Card Sound Road one comes to the intersection where the left turn goes to Florida City, the road straight ahead leads to the exclusive and gated Ocean Reef Club and traffic mostly goes that way. The plebs, gardeners, housekeepers and maids, that keep the community operating tend to commute from Florida City in the morning, so leaving the Keys this way is against the traffic for the most part. 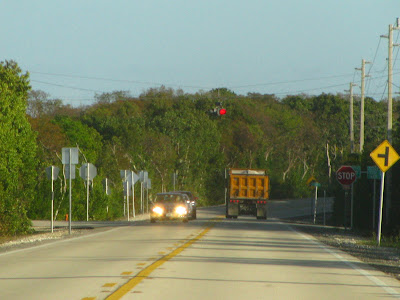 The toll to get out of Monroe County is a dollar, unless you have a pass from Ocean Reef Club issued to employees to give them free passage. They give change at the booth but Sunpass, The Turnpike automated system doesn't work here. 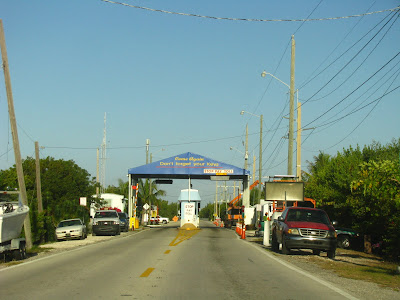 From the Toll Booth at the county line Dade county stretches dead due north for ten straight miles through the southernmost Everglades. 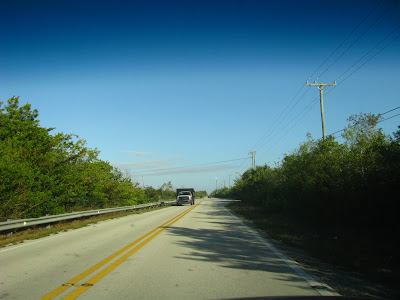 I stopped for coffee and a sandwich in Homestead and admired the new billboards reminding drivers that tolls in Dadecounty are now human-free. If you run the Turnpike in Dade without a free Sunpass transponder you get charged 25 cents extra per toll booth plus you get a monthly two dollar and fifty cent surcharge if they charge you by reading your license plate. 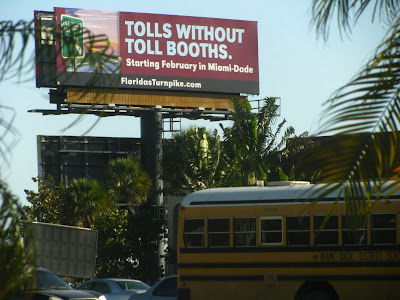 The booths are now no longer staffed but traffic isn't allowed through the booths yet so all traffic has to squeeze into the Sunpass lanes, as a result there is no advantage as previously and all traffic slows horribly. One day soon perhaps things will flow more freely. 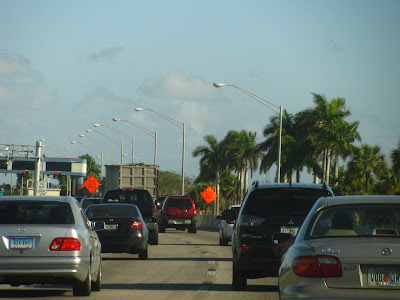 By the time I got off the Turnpike in Boca Raton, four hours after leaving my house it was painfully obvious i was no longer in Key West. These kinds of canyons make me feel like a country bumpkin. 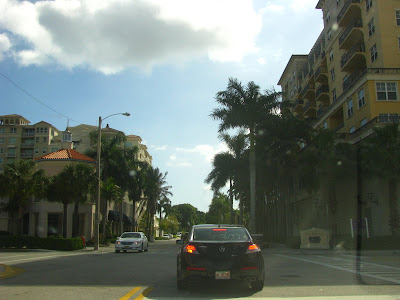 As soon as Icould I left the confines of the big city and headed west, as all young men should, this time on the Sawgrass Expressway headed toward the wilderness of the Everglades. First time visitors often think of the Everglades as being a cypress forest, dank and gloomy but it is in fact the famous River of Grass, a prairie fed by semi submerged waters flowing south. 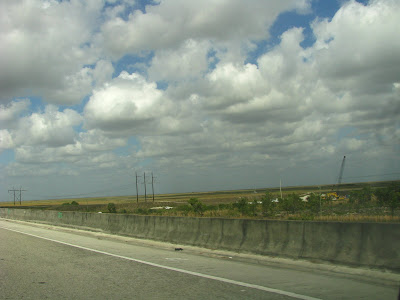 From the expressway I took Interstate 75 also known as Alligator Alley, a $2:50 toll road to Naples on Florida's west coast. After an hour of droning around on multi lane highways Cheyenne and I found ourselves in the heart of the Seminole Indian Reservation. 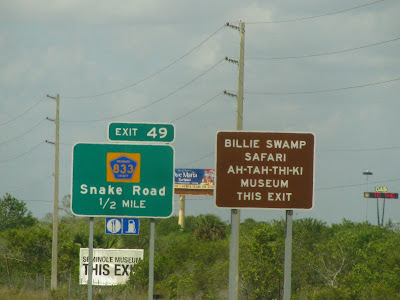 Snake Road is said to be the twistiest road in Florida though this may be an exaggeration. It does meander with some wide curves, though the speed limit is a modest 45 miles per hour and the Seminole Tribal Police tend to be rather active in these parts. Wild motorcycle rides are fraught with the possibility of speeding tickets. 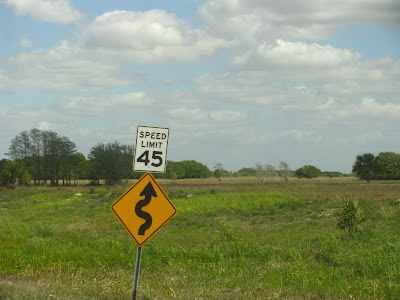 Snake Road does meander nicely north from the Interstate toward the Seminole village. 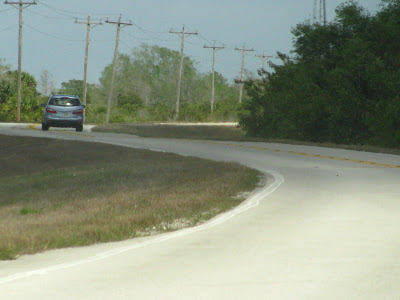 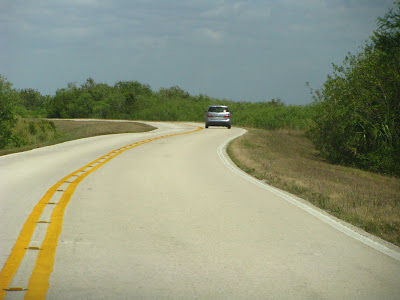 My goal was to find a wide spot in the road to give Cheyenne a chance to stretch her legs, her first walk since Dagny Johnson Park early in the morning. 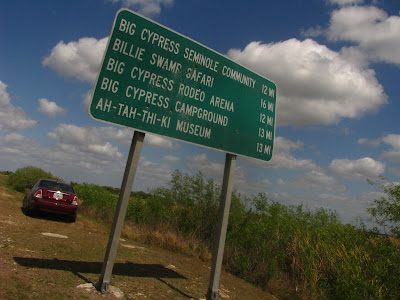 This is Florida's Big Sky country and it was quite beautiful with a light breeze and no humidity and temperatures hovering in the low 80's. Cheyenne took off, nose down along the grass alongside the road. 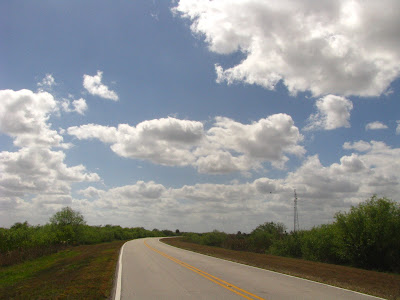 People don't think of south Florida as cowboy country but there are cows here and up near Lake Okeechobee there are genuine cowboys too. The Seminoles have rodeos and stuff so I shouldn't be at all surprised if they didn't have horses and cowboys and all that as well. 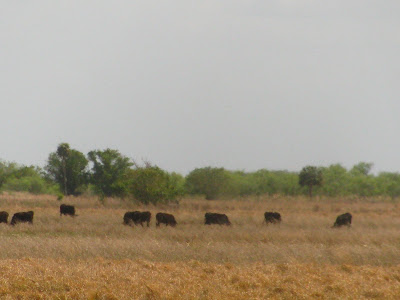 The gate barred entrance to the nearby Seminole Village. Privacy is a big deal for the tribe and their homes are fenced off and out of sight to curious passersby. The casino operations in the eastern edge of the large reservation has funded modernization of the tribes facilities as evidenced by this communications tower: 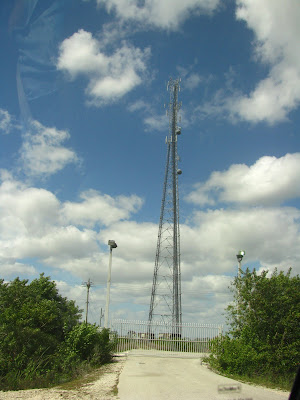 Seminole and Miccosukee homes (they are a tribal subset of the Seminoles) are built in this style on slightly raised land to minimize flooding. 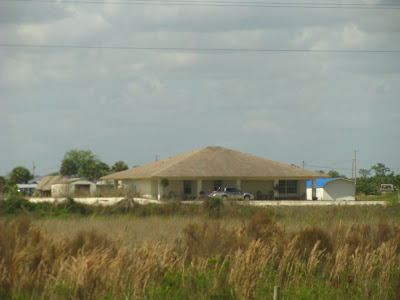 Back at Interstate 75 the Miccosukee operate a gas station and souvenir shop/general store and gas prices are quite reasonable compared to other South Florida stations. Of course when Saudi Arabia joins the other revolting Arab states and goes up in smoke all bets will be off as to prices. 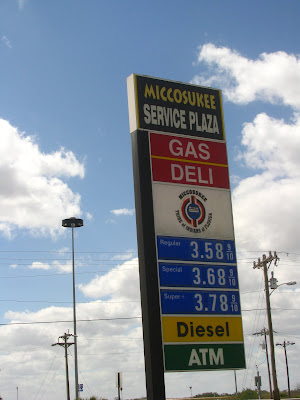 The Miccosukee have their own logo... 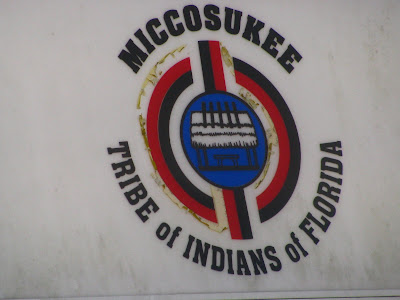 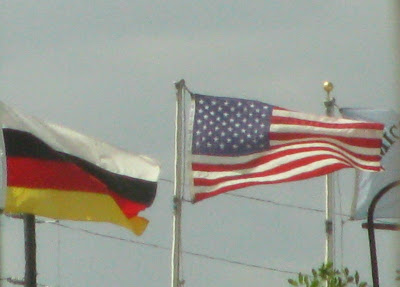 ...and police cars which were quite active ticketing speeders on the highways through the large reservation. 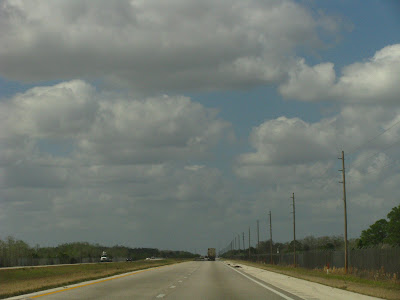 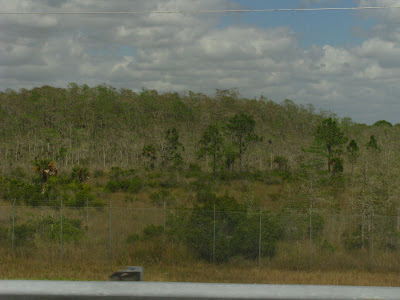 ...and what looks like a hill is just a clump of tall trees on a dry hammock of land in the middle of the River of Grass. 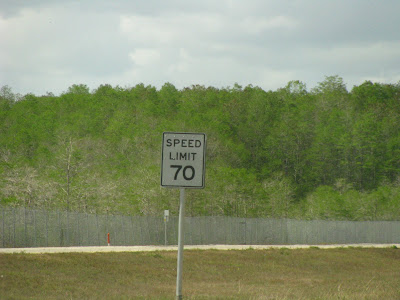 Florida has a speed limit plus five law which allows some speeding latitude, though 80 miles an hour doesn't feel too fast on this long straight flat road. Signage is all terribly modern even in this wilderness. 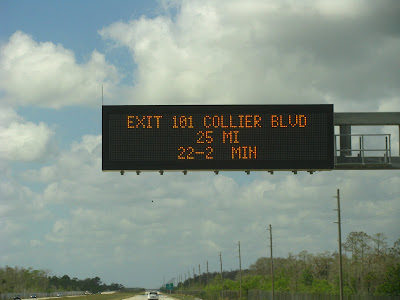 Highway 29 was my exit, the only place to turn south and join the Tamiami (Tampa-Miami) Trail, also known as Highway 41 which runs parallel to the more modern freeway. 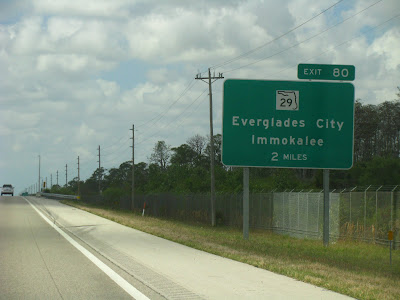 The Florida Highway patrol were out, though helping a stranded motorist here: 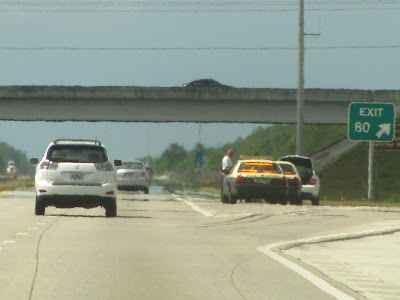 Highway 29 is another long straight highway. 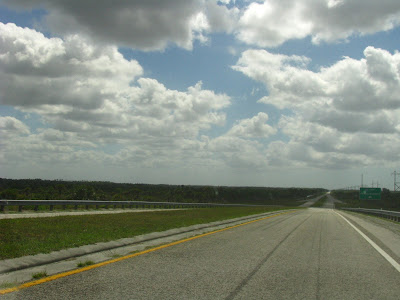 The panther crossing signs are more of a warning to motorists not to kill the endangered cats, rather than as a warning against carnivores prowling. 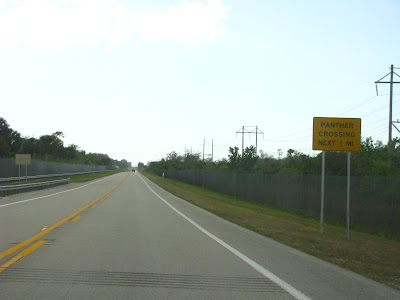 My plans had been to turn back east on Highway 41 and take the Loop Road but I got diverted to a place I had never previously explored properly: the Fakahatchee Strand Preserve and State Park.
Posted by Conchscooter at 12:01 AM 7 comments: Links to this post