My Day To Whine, Thank You.

December has barely begun and already we are getting frozen in the Florida Keys. I am perfectly aware thank you that this is a sore subject for people who are employing snow shovels and are walking on water, but as far as I am concerned the recent temperatures in the sub tropics have been, to put it bluntly, Fucked Up Beyond All Recognition. 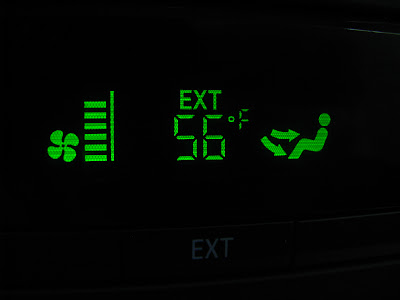 I awoke two mornings ago with one hand incautiously lying outside the covers and it felt like a block of ice. If this goes on much longer we will fire up the reverse cycle air conditioning, which we ran for four months last winter, which was intolerable. Frankly I don't think it is at all suitable to get into the car to take the dog for a walk and see 56 degrees (13 C) at this hour of the mid morning. 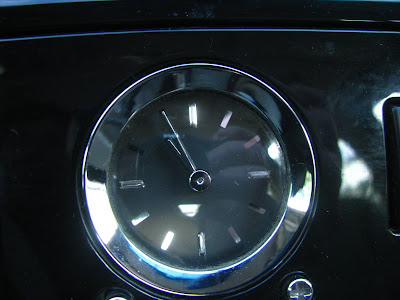 Cheyenne loves this weather as one might imagine. Arriving home yesterday morning after a long night of not doing much I just wanted to crawl into bed after stripping off my freezing cold motorcycle gear. Yes indeed, I rode to work Wednesday night knowing full well it was going to be cold. Cheyenne greeted me by prancing around and the standing hopefully by the car door. With as much grace as I could muster I stuffed her in and drove five minutes across the island to the Ramrod Pool, an open space surrounded by sturdy bushes where she can wander at will at 6:30 in the morning and I can hope to discern a few headlines in the paper as daylight arrives in all it's glory. 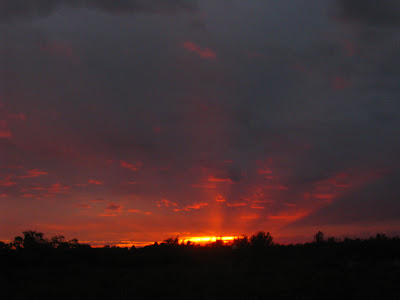 Yesterday morning it was COLD. All right I know that in Minnesota or Finland a chill winter morning is some degree of frost beyond anything I can imagine but the temperatures here are laced with water vapor and even hardened skiers and stuff from Up North admit a 60 degree (15C) day in Key West can give a seasoned person goosebumps.

Besides its all in what you are used to. I remember once I was driving across North Dakota with my fiancee and her family and we stopped for gas outside Bismark. It was a sunny day, bright and fresh after a snowstorm had blown through filling the countryside with drifts of frozen water. My leather jacket clung to me like a sheet of frozen cardboard, my woollen hat sat on my head allowing shafts of piercing cold to drill through the holes in the weave and drive into my skull like ice picks. I tottered out of the Toyota van (a four wheel drive contraption that could plough through any amount of foul weather) and offered to fill up the gas tank. My fellow North Dakotans were standing around in minus 20 degree weather (-29 C) in t-shirts as though it was summer. I could barely operate the fuel pump and my breath felt like razor blades slicing my chest from the inside. 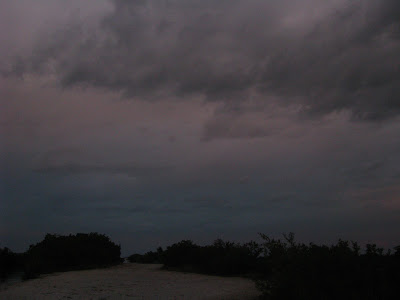 Thursday evening I didn't bother to ride the Triumph to work. Rain had fallen while I was sleeping and even though the skies were filled with thick billowy gray clouds their celestial insulation did not help to raise the temperature. I took Cheyenne for a walk on Big Pine and after about 55 minutes the skies opened and rain started spattering through the pine trees. We aimed for the car and started walking fast. 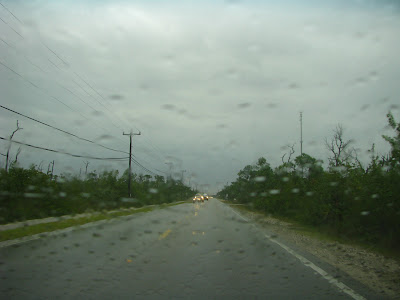 I don't usually mind the rain but rain and frigid cold is over the top. It sucks. It's unnatural. It makes me ask myself why I am not living in Charlotte Amalie or Frederiksted, or someplace close by, in the true Caribbean, the true tropics, America's true Paradise Islands- the US Virgins. Probably I'm not a USVI resident because I like road trips, I like a lower crime rate and I enjoy the weather in the Keys 49 weeks out of the year. Well, at least probably 45 weeks. More than 40 weeks out of the year for sure. Especially if you don't count unbearably hot weeks in August and September. It's not clear in this next photograph but my Labrador was looking at me in adoration yesterday morning and her tail was wagging nineteen to the dozen. Her thirty minutes at the pool had made her a happy girl. 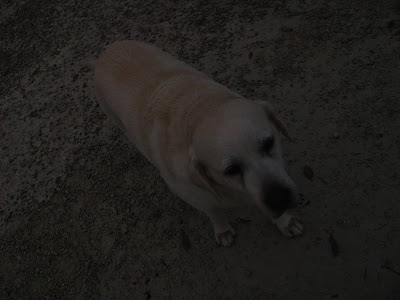 From Richard Machida's Blog in Fairbanks Alaska (opinions expressed are certainly not those of an institution as august as the University of Alaska and anybody who suggests otherwise is an idiot) I read about the trials and tribulations, minimal really, of refurbishing an elderly BMW motorcycle. I have a vague unformed hankering for an R100RS the first factory faired sport touring motorcycle ever built and I find his blog encouraging. http://blog.machida.us/ However there was a throw away line at the end that gave me palpitations. It seems it's a good time to strip the bike because:
This morning, it was -33°F. The weather is trying to make up for the unseasonably warm temperatures of last week.
Holy crap! -36C, how does one cope? I keep pestering him to detail a day in the life of someone who lives this Ironman life and he shrugs it off as just no big deal. Looking out the window at the black clouds and rain I feel my will to live seeping out through the soles of my feet. 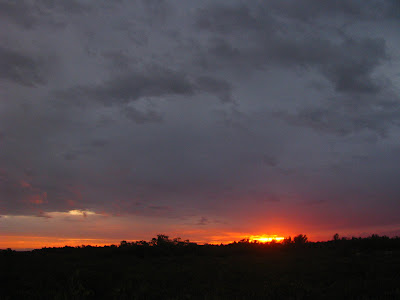 There is another blog, http://www.behindbarsmotorcycle.com/ which in his latest essay presents as clearly as anyone ever has the muddled attitude someone like me has to the whole notion of outdoor winter sports.

What stuns most folk below the Mason-Dixon though, is going outdoors in winter - for fun... sledding, snowmobiling and the most admirable, ice fishing. All of which are popular enough to warrant entire industries producing goods to keep them going. Hobbies that require a resistance to frigid cold in addition to a healthy lack of good sense. And, if you don't know what ice fishing is, it involves a truck, a frozen lake, boring a hole, and sitting around all day waiting for lethargic, half-frozen fish to find your hook – And, is also a great way to keep your beer cold without your wife ever knowing you bought it. Not the kind of activity for a people afraid of the cold. Better suited for a people who think, that like climbing Everest, something difficult is something worth doing - something worth striving for.

My wife is one of those, raised in Northern California who has never appreciated the cold. She was armed for bear when I crossed her path at the gas station at the end of our street. I was coming home from the pool, she was on her way to work, to teach the little dears wrapped in wool with Ugg boots on her feet. 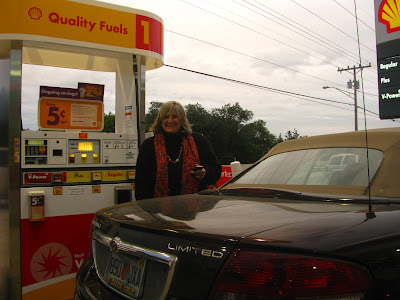 Her language was not at all ladylike as she pumped regular gas at $3.11/gallon into her car. Her Sebring has heated seats and this time of year they are on all the time. If temperatures drop below 80 degrees (27 C) and she wants the roof down, on comes the heated seat. That's her tolerance level for cold. She has announced at last that the heat is coming on at the homestead, and we are among the lucky ones who actually have central heat through reverse cycle a/c at our house. Lots of people don't.

I remember last year we arrived in Asheville, North Carolina about this time of year to visit her sister's family in the mountains. It was cold, and they always tell us, "It's not normally this cold in Asheville." Or "It hardly ever snows here." And every time we show up the weather turns to shit. Just as it did last year, because when we showed up it was twelve degrees (-11 C) and we were seriously frozen. We staggered into the house where the family was gathered to greet us and instantly they treated us like mental deficients. Of course it's cold, where's your cold weather clothing? Of course we had on every stitch of cold weather clothing we had and when they understood our plight out came the puffy jackets and wool accessories and the sympathy. That's right, we don't actually possess cold weather clothing around here. Last winter people were getting cold and lamenting they had no socks, never mind parkas, in Key West.

There is a saying which I have heard attributed to Norwegians which goes something like this: "There is no such thing as bad weather, just bad clothing." And there is a great deal of truth in that. However in the Keys one doesn't plan one's life around periods of exceptional cold. If last winter's long freeze is emulated this winter we may have to reconsider as climate change or whatever alters our patterns of local weather. Tourists come to the Keys to lounge by the pool, to throw of their clothes and their cares in varying degrees. They don't come to huddle and to try to ignore roiling gray clouds and piercing cold wind. The Keys are sold on the (false) premise that these islands are tropical and that they are a Caribbean Paradise. Much of the time they live up to billing but for a few weeks in the year they don't. And it sucks all round. Partly perhaps because when the weather doesn't suck around here it is absolutely perfect, summer or winter. But when it does suck I shall make a point of whining about it. If you choose to live where there are seasons and there is snow and you do it by choice my hat's off to you. When the weather, the great attribute of my home town, lets me down, I might as well be shovelling snow or wearing electric motorcycle gear. And that's not something I'd do by choice. Not without a lot of whining.

Posted by Conchscooter at 12:01 AM 28 comments: Links to this post