It has been a glorious weekend, three nights off in a row for the first time in probably nine months of endless continuous overtime. Mostly I slept. I spent Saturday and Sunday getting up and going to bed with a little light eating and dog walking inbetween. And then I slept some more. 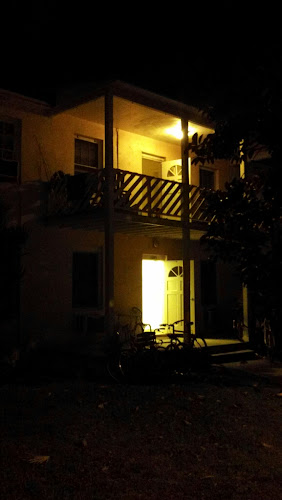 Which also meant Cheyenne, now fully recovered from what appeared to be a snake bite, decided it was time for a pre-dawn walk. The Labrador commands and I obey. 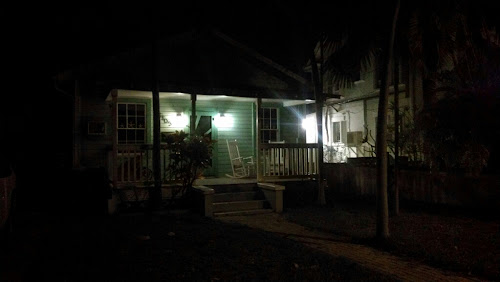 Sometimes the  evocative nature of Key West streets  by night  gets over ridden by the weird decorating styles I come across. I am not certain why this Festivus pole was illuminated, or even why it was planted next to the leafy tree, but it was and it was brightly illuminated. 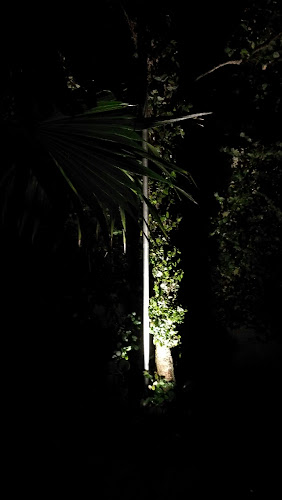 Cheyenne's impatience with my photographic meandering also leads occasionally to some light and motion studies. It was cool and breezy and the elderly,  and the formerly almost deceased Labrador pulled a Lazarus on me and was dragging my by  the leash such was her hurry. 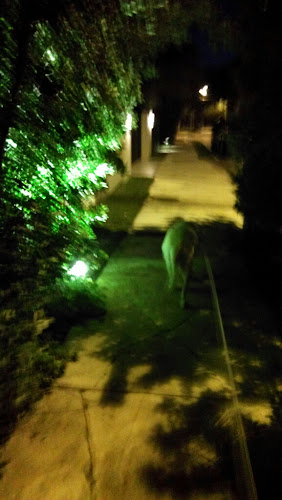 Aside from the occasional car  shooting past the intersections there was no sign of human activity anywhere. Someone asked on Facebook recently on one of those re-post things  what would you do upon discovering you were the last human left on Earth. 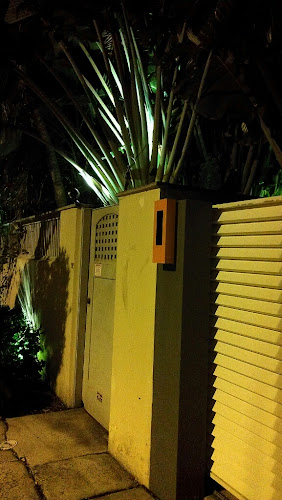 Breathe a sigh of relief and walk the last domesticated dogs in the silence, I replied. I do my best to recreate  those circumstances any  pre-dawn walk, with more or less success. 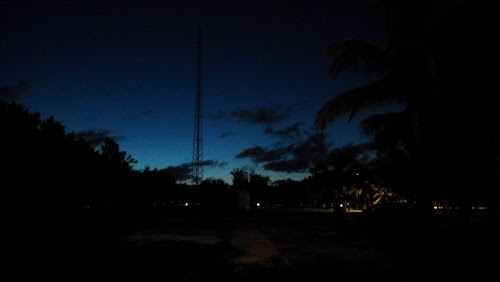 The first sign of life was the beach clean-up machine, the closest local kids will get to seeing an agricultural tractor in action. It tows a  trailer with a rake arrangement and sweeps up the dead seaweed and human trash and leaves the sand ribbed like a Japanese ornamental garden. 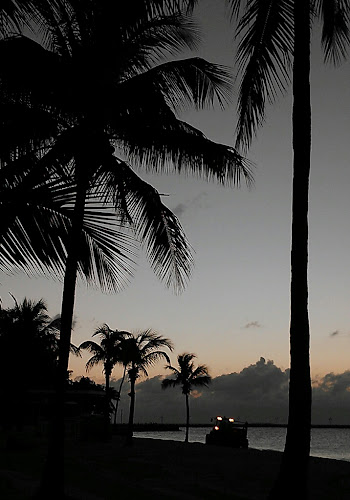 Higgs Beach parking lot collects  debris rather in the manner in which the beach collects dead seaweed, only this lot are van residents, and car campers who drift in to the city from a night spent who knows where and they sit in their cars like hermit crabs in their shells and stare at the beach through their windshields as though afraid of getting too close to Nature. 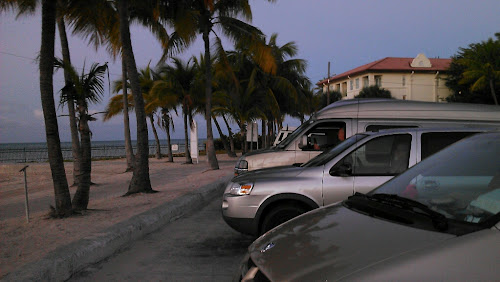 I imitate them by observing nature through the lense of my Android camera. 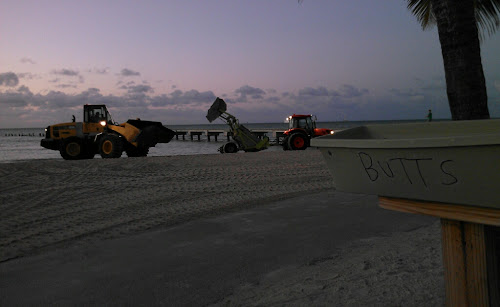 As the sun rises dogs appear and if you want to know how to avoid conversing with your fellow humans, try walking a dog. People are utterly terrified of letting their dogs get anywhere close to your dog. Some look mournfully at my dog and ask if she is friendly, to which I reply not really, at which they recoil before I manage to explain that Cheyenne is indifferent to canine contact for the most part. Not friendly, not aggressive, just uncaring. By then the worry warts are long gone. 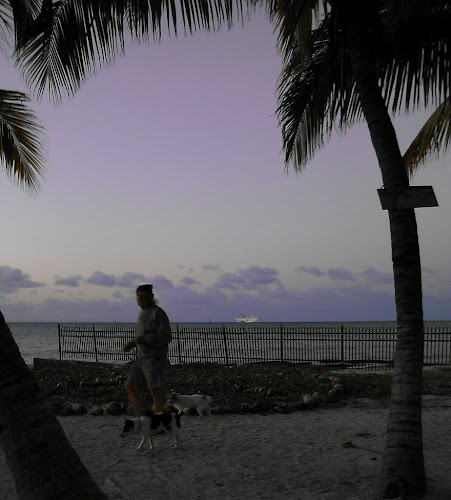 Sometimes I say actually Cheyenne is a Navy reject military dog. They were training her alongside dolphin to kill and maim large swathes of people, and they laugh with me at my carefully disguised attack Lab, mooning around sniffing sidewalks and tree trunks. 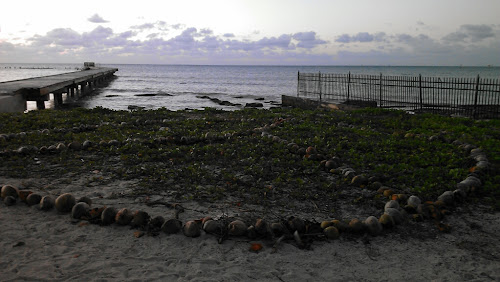 Someone had a day off and decided to spend it putting coconuts in a large peace symbol on the beach. If pressed I dare say I'd have no idea how to spend my time more fruitfully. Walking around with a metal detector is not on my list of preferred hobbies. Besides I think to be good at that you'd want to go off the beaten path and seek out something more interesting than lost dentures and stray bottle caps in the sand. 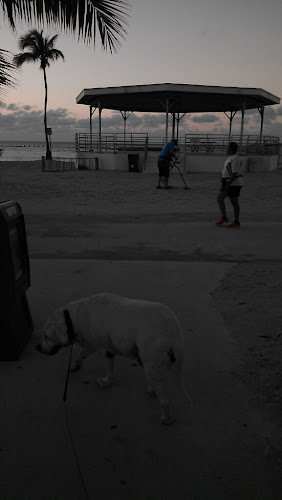 And here, in front of the fine Salute Restaurant we have a combination of birds, locals in white stepping with dignity and in silence. The two black incomers tear up dirt and spread it everywhere, they make noise and shout aggressively. 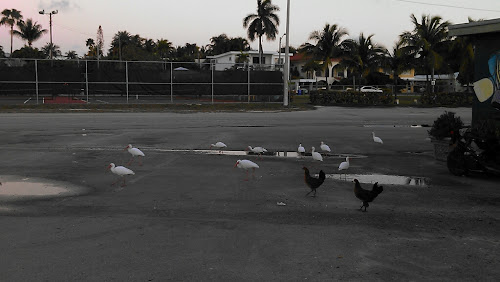 I know which insect mauling birds I'd rather have poking around my front yard: 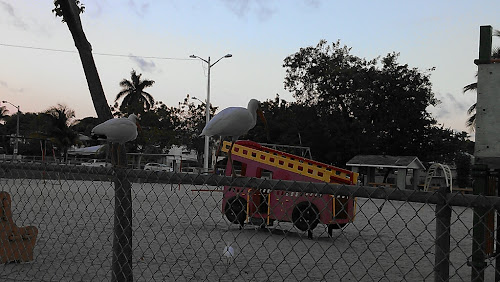 Done, finished and ready for breakfast. 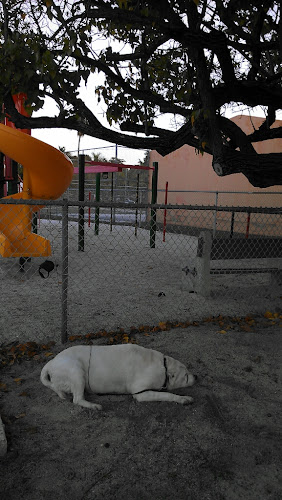 The attack Lab in stealth mode, waiting for her prey, preferably baked fried or grilled.