The clock on top of Old City Hall showed five minutes before seven and the bell chimed the seven o'clock hour on Christmas morning. Confusing to a precision freak like me. My cell phone confirmed the bell was right and the hands were wrong. 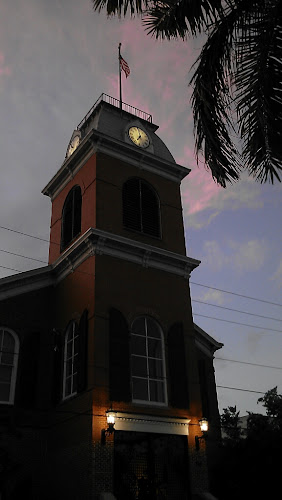 Christmas is over for another year  -phew!- and we all survived the holiday. Now we prepare for New Year's Eve which in Key West is an opportunity to drink - no, really - and turn Duval Street into one long party zone. I work, naturally and I have yet to see Sushi drop in her show at the Bourbon, or the Conch shell at Sloppy Joe's of Evalena Worthington at her bar Schooner Wharf. So many midnights to mark, yet so much 911 dispatching to do. 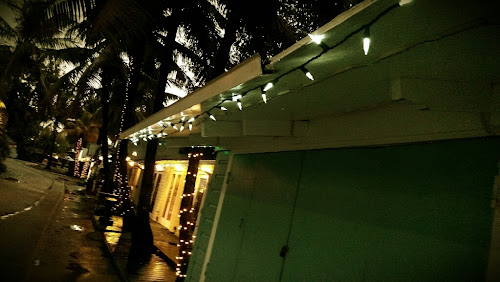 The decorations are still up, and this is about as close to icicles as I want to get thanks, so we get to enjoy the festive decorations a while longer. More than that we have to now keep our Christmas promises to be nice to each other and all that sentimental stuff. 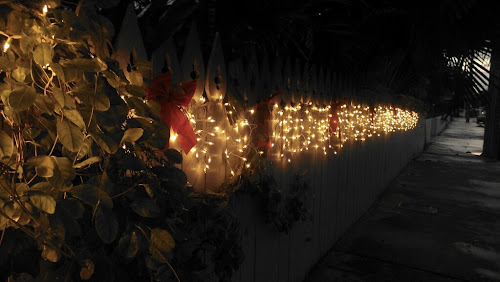 Sentiment is all well and good but coming to work last night on a cool breezy winter evening and looking for hot Cuban coffee to warm the cockles of my heart I found Sandy's was closed. The 24 hour coffee shop, the only one in town, was closed. They do this to me every year and every year I forget. I had reason to speak with a Sheriff's deputy at the jail and I mention Sandy's was closed and he lamented moodily with me about this crisis of caffeine. Well: I guess the Christmas spirit didn't last long, not for shift workers. 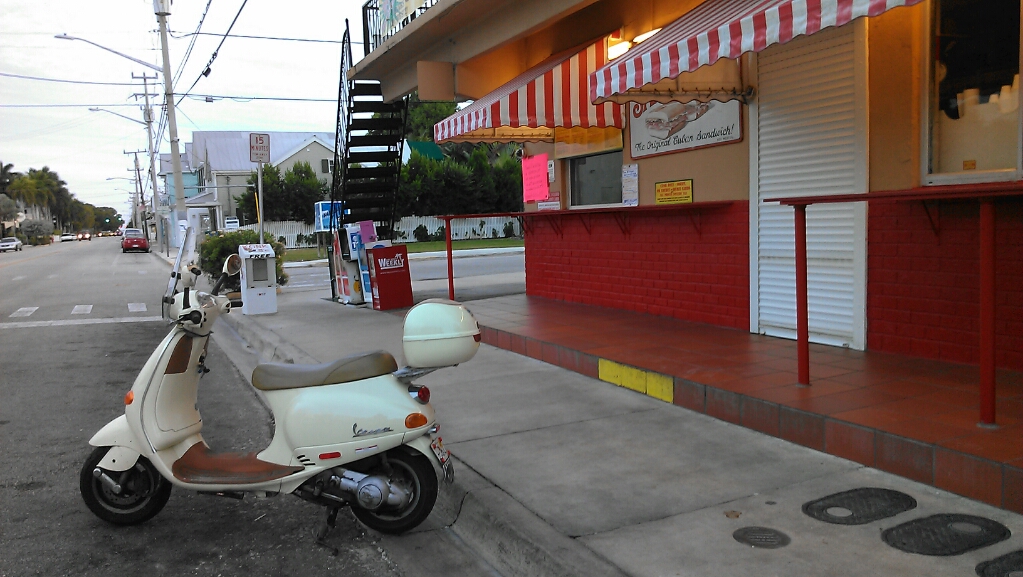 A shop inducing customers to buy had what I thought was a slightly incongruous display of Christmas yule themed decorations alongside summer t-shirts on display. People in Key West  don't usually own or wear parkas, snow boots or astronaut style mittens. 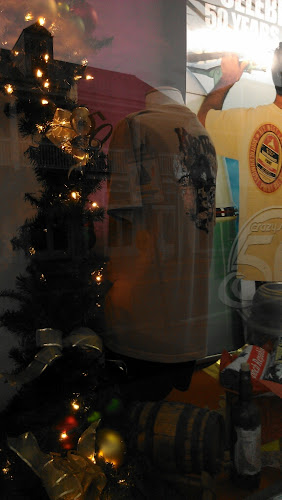 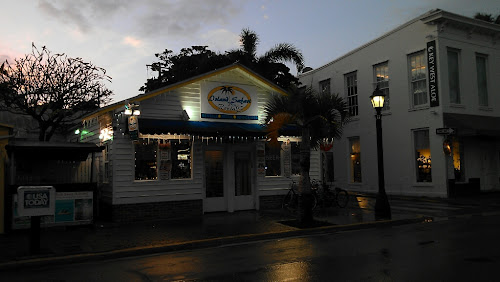 Cheyenne found a tray of cat food for the stray cats lurking downtown. She marched in on a gaggle of chickens having Christmas breakfast and I let her snag a bit then dragged her off up the street. Actually she had had breakfast at home and soggy cat food was a token of her hunting prowess and not exactly desirable prey, so she came willingly. Some hungry creature would appreciate the food more than she did. 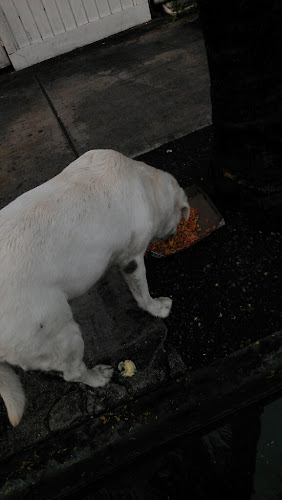 Note to self: remind my wife we need to see this. One of the best parts of winter in Key West is live theater and as long a sit isn't goofy musicals in drag I love to go. I've seen some really great dramatic productions here and at the Red Barn and I always look forward to more. Comedy works too, I'm just not able to stay awake through thinly veiled plot excuses for song and dance. . 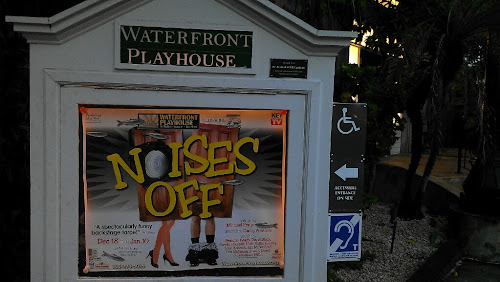 Mallory Square with flags half raised, presumably in honor of the recent law enforcement dead in Florida. A brisk cold north  wind was raking the square at 7:30 and we were alone except for another dog walker crossing our path briefly. 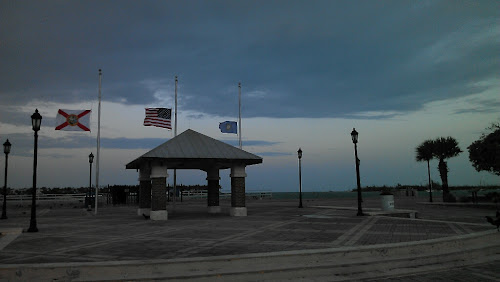 I have less than brilliant memories of cold nights and cold mornings on my boat at anchor out there. Heating a boat at anchor consumes massive amounts of energy and frequently, in a relatively mild climate like this one, hot tea and a blanket replaces central heat. There is a commonly touted solution among boaters of heating a  clay flowerpot on the stove top to radiate heat. I tried that and thought it was a waste of time and propane gas. If you leave the stove burning you end up gassing yourself to death. I definitely went the tea-and-blanket route on cold southern mornings at anchor. I wished them luck and turned back to Duval Street. 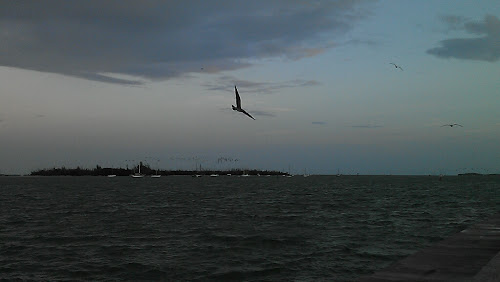 Some days you see the big picture and then turn your back and see the little picture, like grass growing on the skyline of a brick building at Mallory Square. When I realized it was El Meson de Pepe, it got me thinking about the end of the Cuban embargo which seems to be in sight at last, despite the last old timer hold outs scattered across south Florida with their political lackeys. 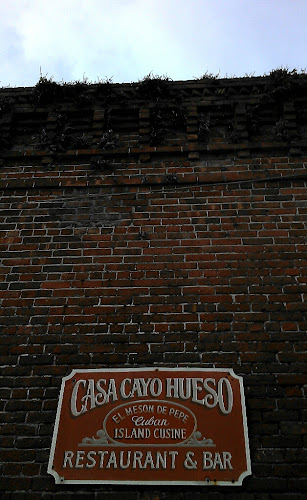 I had a discussion about Cuba post embargo with a European friend who imagines, in a rather European way that Americans who love their cars will want to drive down to Stock Island and take a European style hydrofoil ferry to Mariel. I figure they would rather fly to Miami and tkae  a 30 minute flight to Havana...which is when an American friend of mine piped up pointing out the Jose Marti airport in Havana is a tin shed and the toilets are old fashioned European style holes-in-the-ground...
...not ready for prime time as she put it! Indeed I expect Cuba will have some catching up to do before Americans will feel safe visiting godless communists on their island. I hold out hope trade will require truck bearing ferries between here and there,  high speed ferries with room for private vehicles. 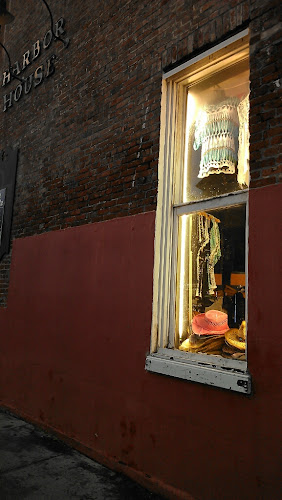 Meanwhile change keeps moving forward and Red Fish Blue Fish has gone (no loss) and something new will appear on Front Street no doubt. 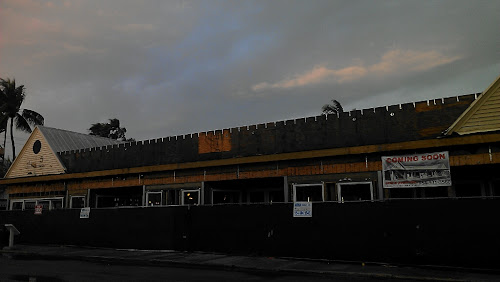 The Bull was looking solid and festive, not that Cheyenne cared as she looked for something to eat. 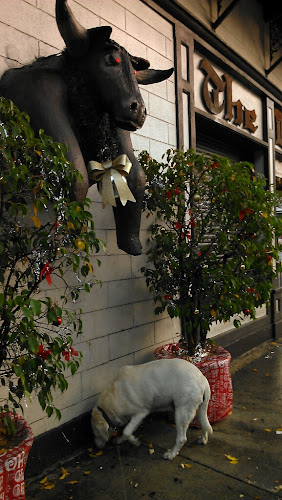 I didn't care either. I had pancakes and mimosas at home for Christmas breakfast (not everything about this holiday needs to be abolished) followed by bed, sleep and work. Back to The Usual.