I view my photographs and the words that accompany them a diary of my life to some extent and to a lesser extent as a record of the Lower Keys at this period.I don't go everywhere obviously and I am no longer a reporter so I am exempt  from feeling an obligation to be on the spot, but I can't stop myself from reading the newspaper. 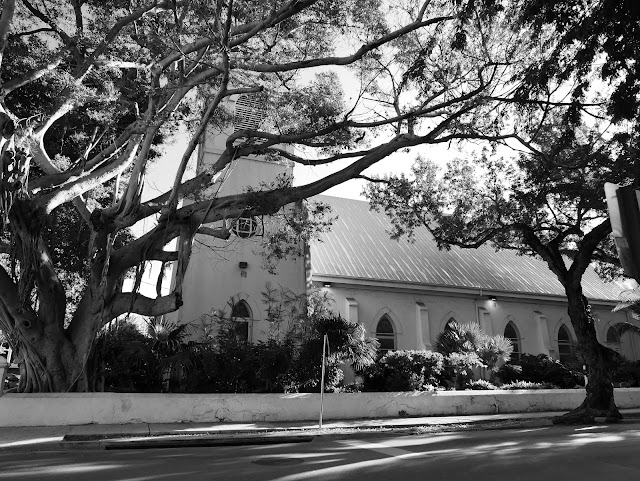 If there were any doubt that development taken to the limit is the goal House Bill 587 should put that to rest. This legislation apparently not supported by the Keys (Republican) representative offers to ease hurricane restrictions on development to...do what exactly? Save the state money they say. 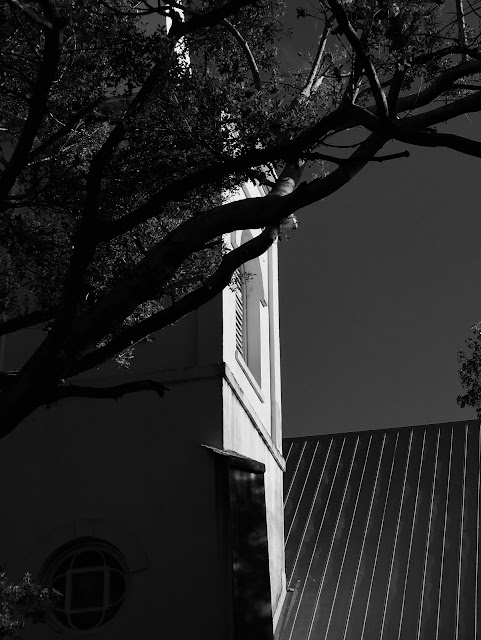 It goes like this: development has reached maximum capacity in the Keys and the way that's calculated is how fast can the authorities evacuate the islands, supposing say a hurricane is imminent, and the magic number till now has been 24 hours. That's why you hear the order for a "mandatory evacuation" before the arrival of a hurricane and they start with tourists and residents of mobile homes. After 24 hours (the magic number!) they order other residents to evacuate. You can choose not to leave but in choosing to stay over a mandatory evacuation order you have to know there will be no help during the storm. That's what mandatory evacuation means, and emergency services don't respond when winds reach gale force because the hospital closes down and there is no medical support for first responders injured during a hurricane. Creating a  storm proof emergency room should be high on the list of priorities as the authorities now want to extend the evacuation time to 30 hours. 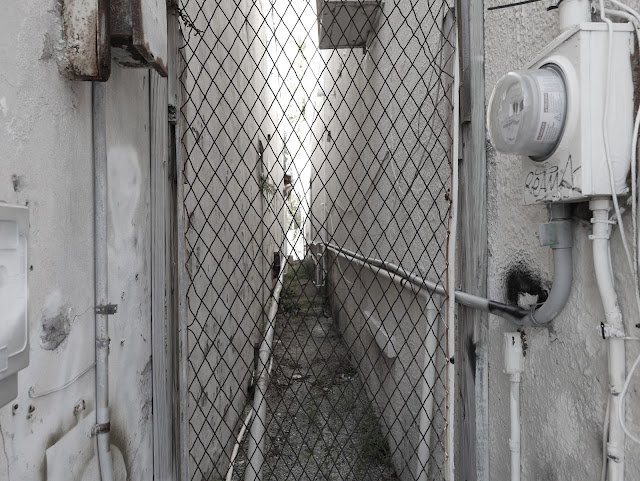 Extending evacuation times by six hours doesn't sound like a big deal but it changes everything. What it means is the population of the Keys will be allowed to increase as soon  as the "carrying capacity" of the highway increases by 25 %. The rationale is that owners of empty lots that cannot build on them will demand compensation from the government for their land that suddenly has no value and to avoid making the payouts the state legislature is creating a  new reality ion the Keys with I have no doubt, lots of unforeseen consequences. 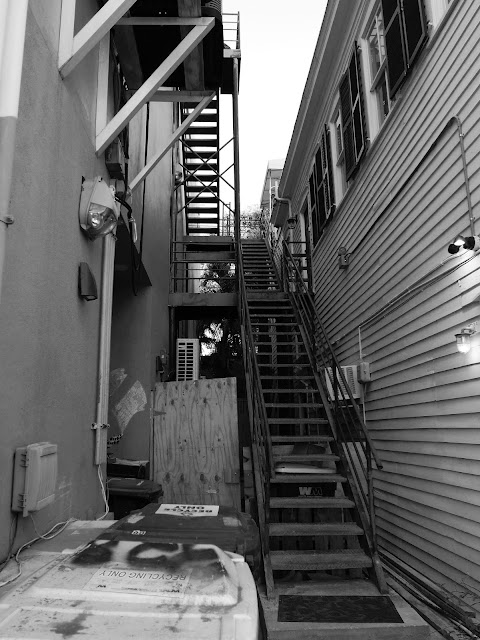 There is a pervasive air of unreality in these discussions about development and evacuations and storms and sea level rise and insurance rates and flood plains and all of it. I don't understand the logic of increasing the population density, slowing the evacuation times while at the same time raising alarms about the increasing likelihood of storm related damage to existing structures. And you know the people who choose to ignore these obvious warning signs will be at the front of the line blaming anyone but themselves for their poor planning and decision making when disaster strikes. 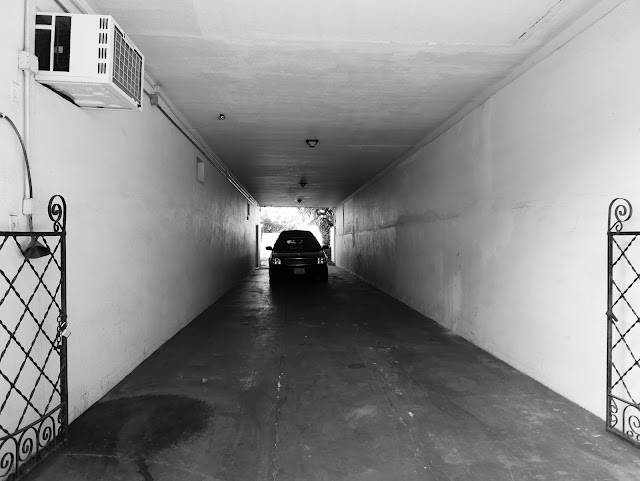 I read in the paper about residents without mortgages who carry no flood insurance. My mind boggles. The bald truth is f you can't afford the insurance you can't afford to live here. You can gamble your future right now but when you lose you will have to take your losses like a grown up. One resident told the Citizen he plans to invest the equivalent of the insurance premiums to self insure effectively. Doing that and thinking it's smart makes the assumption there will be no chance of a serious storm in the immediate future. The whole point of insurance os to pool the risk, not to rely on no damage for along time ahead. 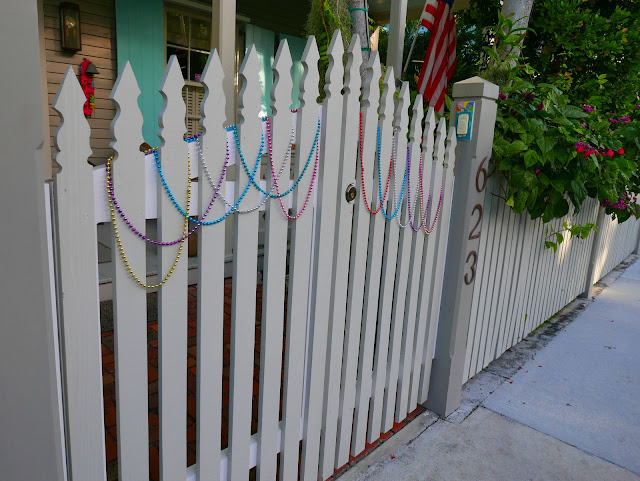 I have no stake in all this as we decided not own real estate in the Keys and to rent  after we got rid of our Ramrod Key home. We lucked out with a  fantastic landlord and a very quiet neighborhood on Cudjoe Key in a house that rents for an extremely modest $1600 a month. You will pay at least twice that if you can find anything in Key West. But all this real estate is seriously at risk and the decision to own in the Keys has to be accompanied by a  sensible evaluation of your aversion to risk and loss. 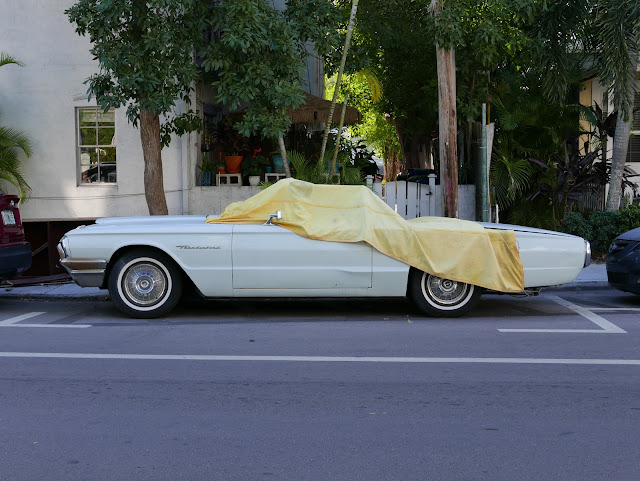 If the changes are made and the state legislative majority is firmly Republican with a Republican (though very sensible) Republican governor all studying a proposal made by a  member of the majority caucus so... Our only hope is if Governor DeSantis looks at this idea and says it's nuts. He's an odd fish is the governor as he toes the party line on national politics but he's a Floridian at home, moving to spend money on preservation and the environment and talking to people with out pushing the party line within his state. He reminds of Democratic Governor Graham of fond memory, a mild mannered Dixiecrat wiped out by the Reagan revolution in the South. I fear the pressure to allow development in the Keys will push back the evacuation times and the difficulties created by this decision will be pushed out of sight into some future timeline. As usual. 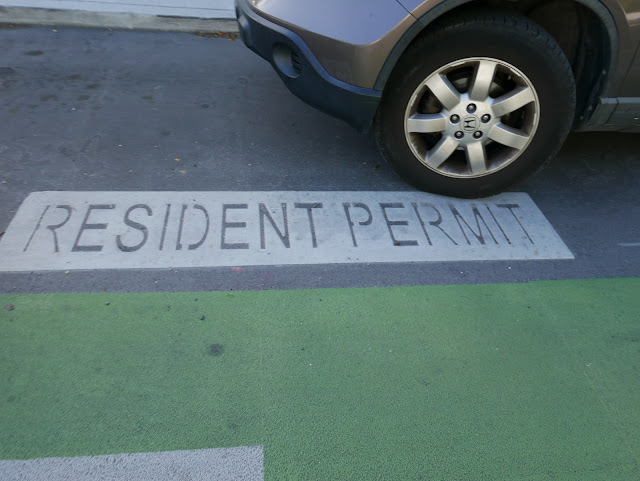 By the time this madness gets into the pipeline I will be retired. It would be nice if there was somewhere to come back to for my end of life, especially as the new old folks home on Duck Avenue is getting taken over by the county which should give it some longevity but the crowding looks set to reach Hong Kong proportions before I will have finished driving around. Being evacuated as a not-so-spry old man doesn't sound too appealing. Especially like this.
Posted by Conchscooter at 12:00 AM 2 comments:

I wondered how long it would take to bring Sammy Creek back after this place was ravaged by Hurricane Irma in September 2017.  Not long at all and every time I drive by on South Sugarloaf I hope to see no cars parked at the entrance gate. 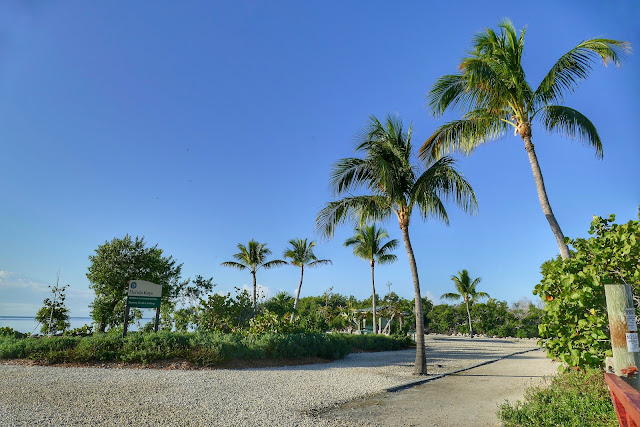 There are picnic tables under shade and a small boat launch ramp so you can walk your kayak to the water's edge by the bridge and cast off into the strong currents of the creek. 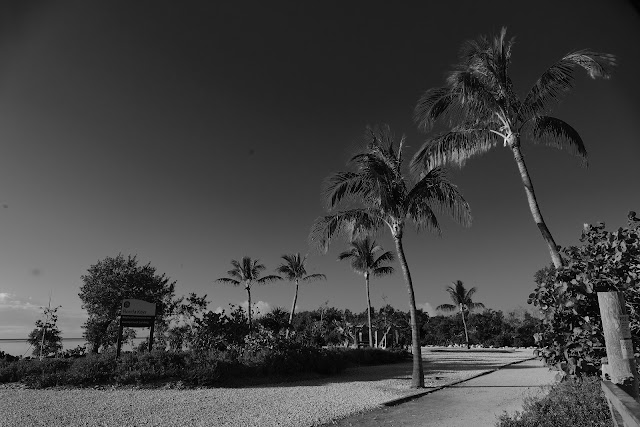 It's a gravel pit with some flower beds and lots of light. I really like it here. 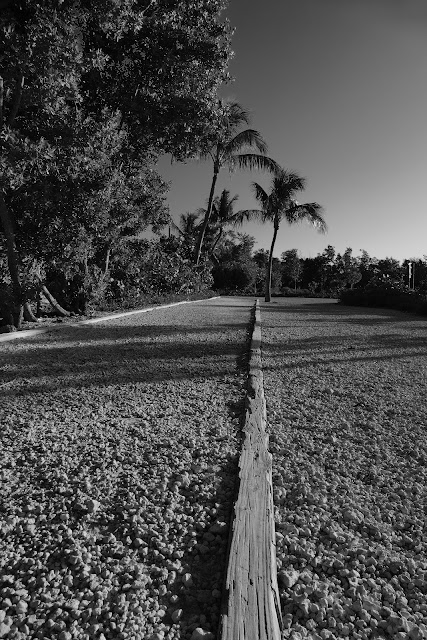 I usually get bored long after Rusty starts whining, staring at me wondering what I see in this small sliver of quiet space. I overexposed the cormorant taking off but I liked the mistake. Leaping Into The Void: 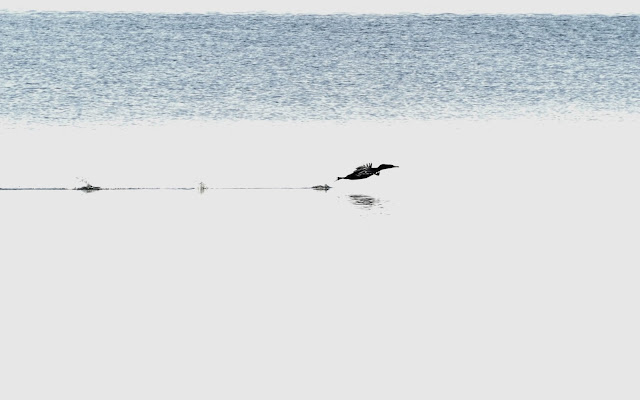 Coconut palms go into an altered state when viewed in black and white. I set the red filter and use the tungsten white balance to create the black sky and the sun shining on the fronds creates the contrast. 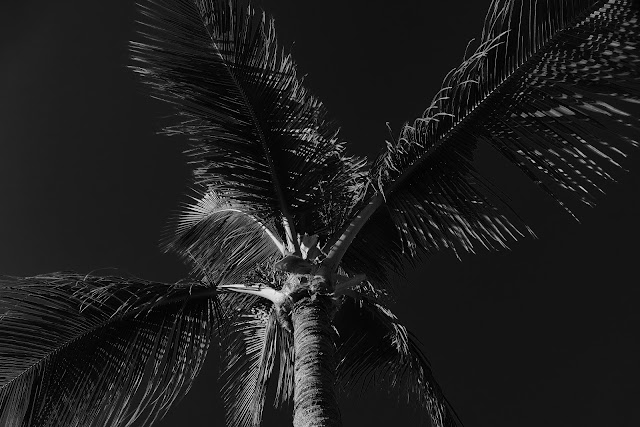 Ignore the dog staring at me and pouting. He'll be fine. 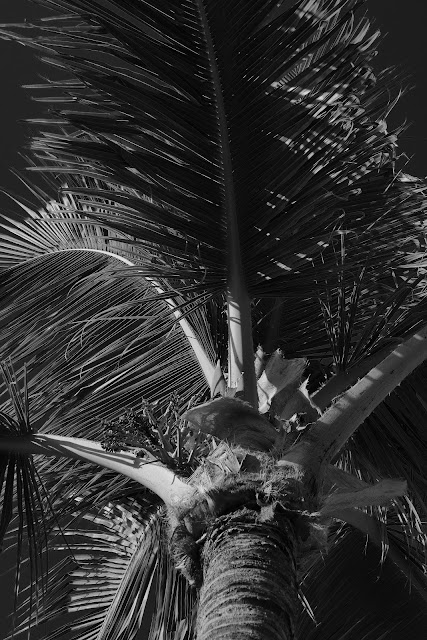 They bore holes into the coconut palm trunks to inject an antidote to lethal yellowing disease which tends to kill them. Yes I know it sounds  like a cartoon joke but the cure while expensive does work if you want ornamental coconut palms in your life. 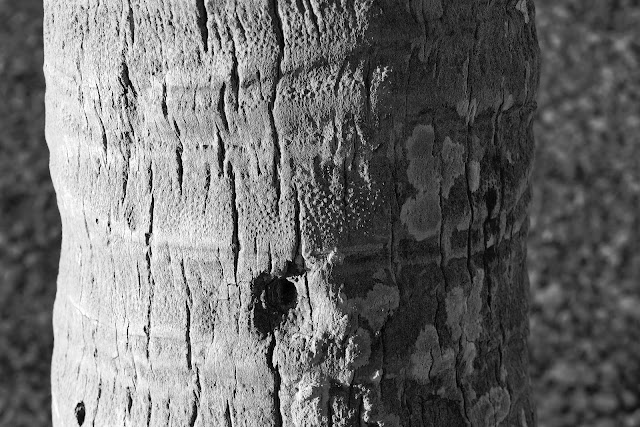 Oh and the texture of the palm trunks reminds me of elephants. In black and white pictures. 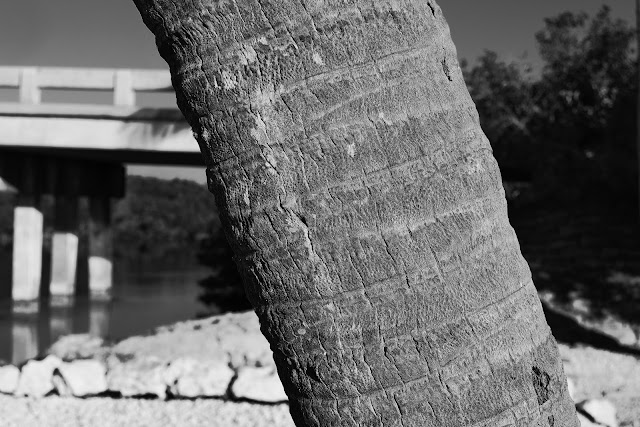 I saw the occupants of a car with a northern licence plate hauling picnic apparatus toward the gate as Rusty and I were leaving. We got out just in time. 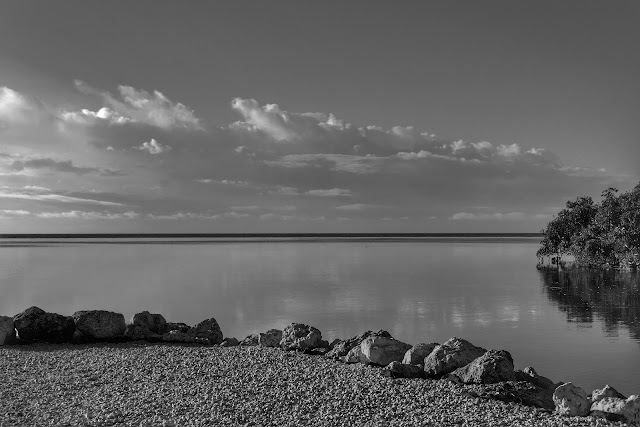 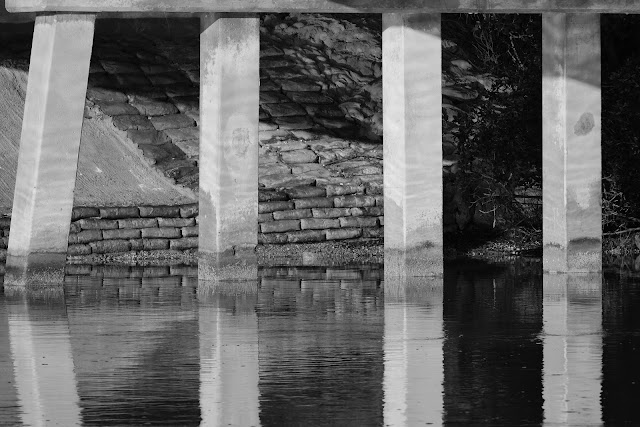 It looks like summer but feels like winter. A Florida winter of course with a light cool breeze and temperatures near 80 and no humidity (that I could feel). 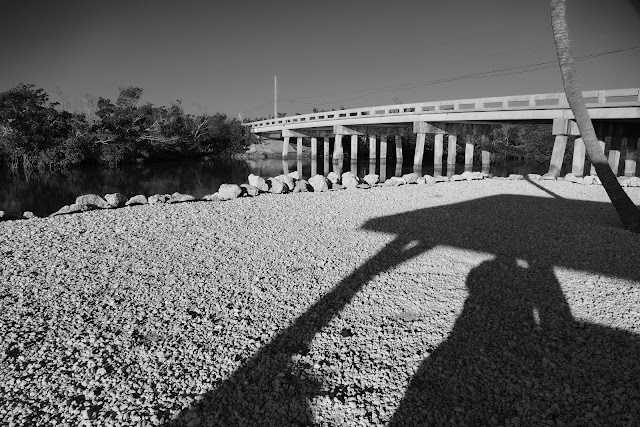 It felt like summer in that we were alone. 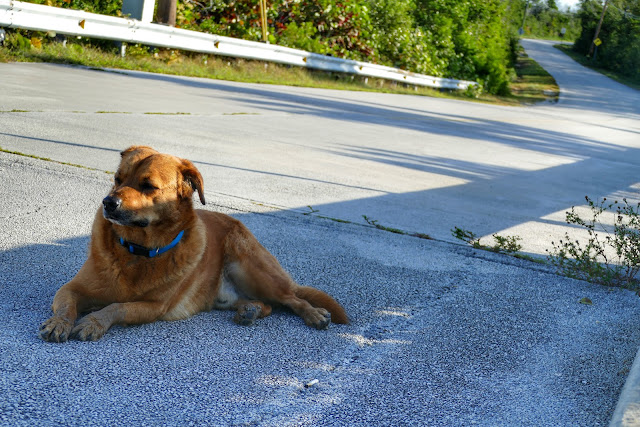 Red mangroves. The bubbles mark the tidal current flowing merrily out to sea. There are no fresh water creeks in the Keys so a creek is a saltwater passage between mangroves. Not a river. 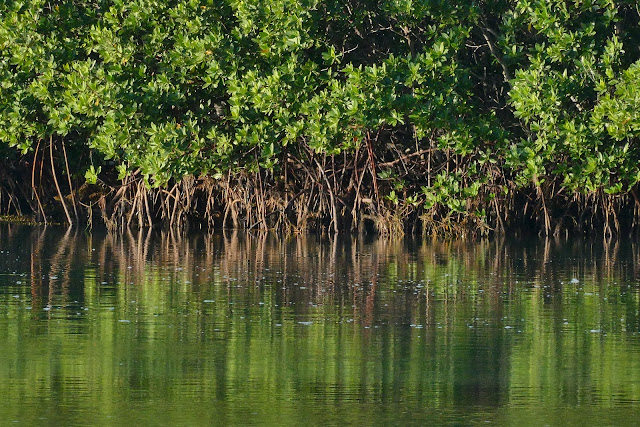 I heard a rumbling noise so I in turn rumbled to my feet and stopped rubbing Rusty's stomach to snatch a photo. "Priorities," I told the dog who is notorious in my life for looking away whenever I take up the infernal device. I pointed the camera up the creek as I listened to the rumbling which had turned into a hull slapping sound as the boat came down the waterway. 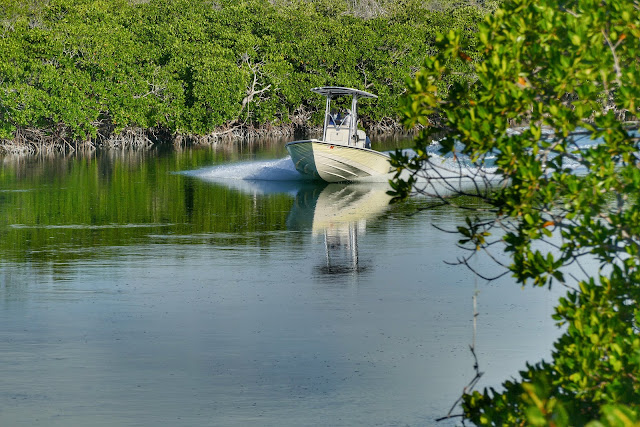 There is something unappealing to me about being all bundled up on a  boat. I convinced my wife when we got married in 1994 that we wanted to honeymoon in Grenada, good idea, on a boat, unknown quantity. She took to it fortunately but I discovered rain at twelve degrees north in the Caribbean is just as cold and nasty as it is on California's foggy cold coastline. I like ambient heat on my boat. 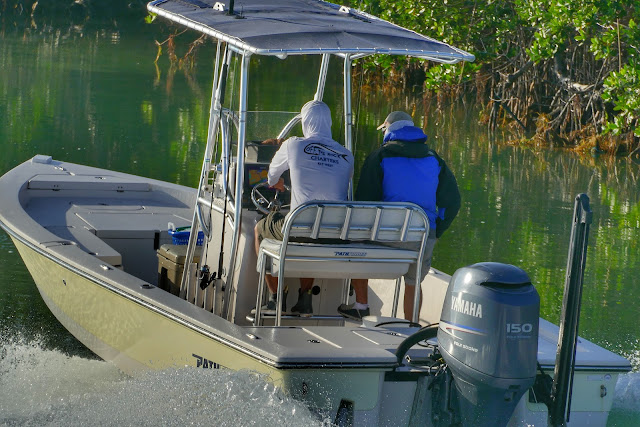 Besides which driving a  center console is inherently boring to me.. It's like driving a car only at half the speed with no of the comfort. I am not holding a  majority position here I might add. They had fishing rods so I assume the plan was to stalk innocent fish and hook them to their death by suffocation in the bottom of the boat. Also not my cup of tea. I go fishing at Publix and Winn Dixie. 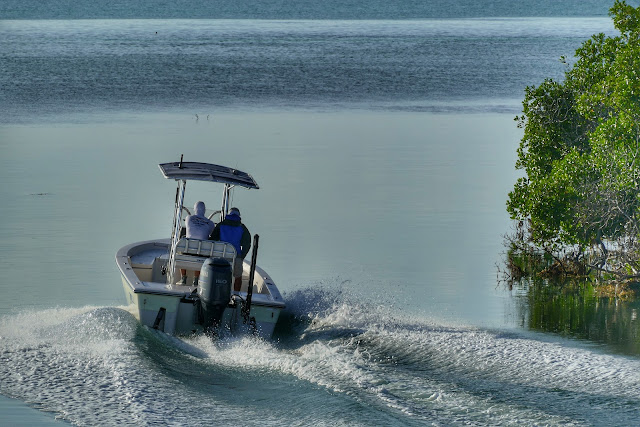 Rusty is quite partial to a can of tuna from time to time but raw fish would be survival food for him, on a par with iguana or rodents. I have this idea that in the even of a zombie apocalypse my survival tool is my dog. We would go feral together eating iguana and hiding in the bushes from the zombies. It would be great. 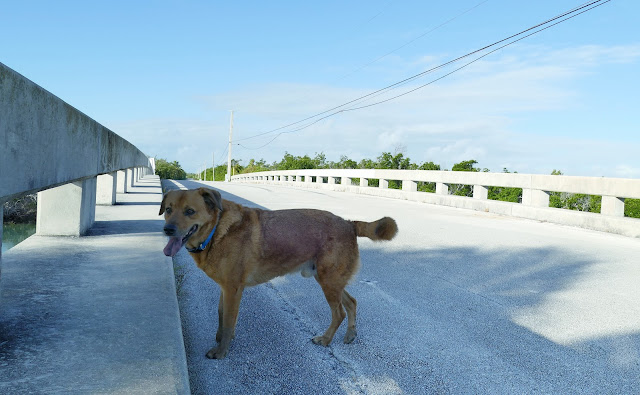 It would probably be ghastly but Rusty survived by his wits and I expect he could do it again. I prefer the genteel middle class life of wandering around, taking pictures and going home to tea and a nap. He seems to prefer it too. 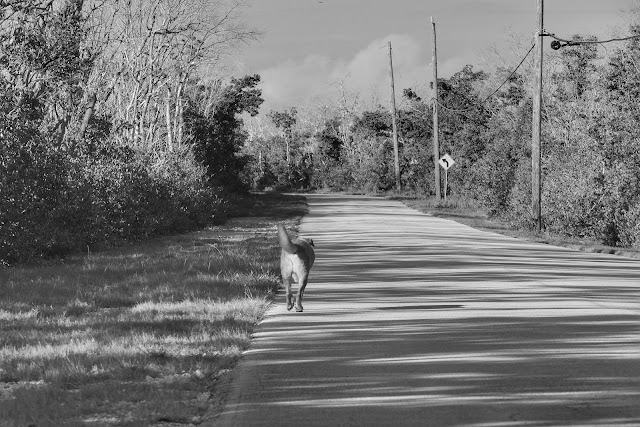 It was a pleasant afternoon at Sammy Creek. We need to do it again when I get a day off sometime in the distant future.  Alongside photography Rusty thinks overtime is a  really bad idea. I can't say I disagree but I wonder how he will cope having me around all the damn time when I retire. 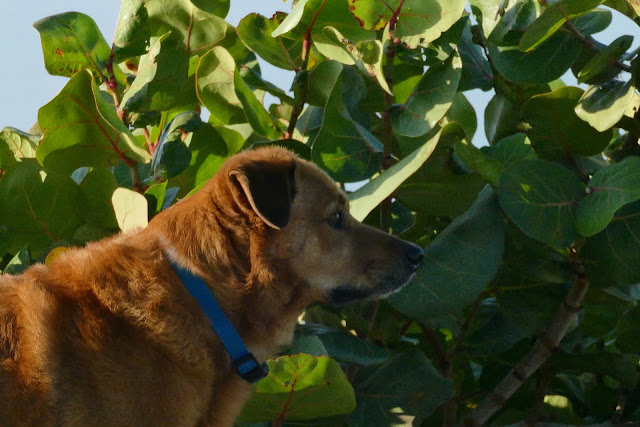