I am frequently reminded how unfortunate it is that tourists come to Key West and enjoy getting around on bicycles and scooters and then go home and fail completely to adapt any part of their suburban lives to using a bicycle as part of their daily transportation. And yet as this appreciative driver instinctively understands, a female cyclist in motion is a thing of beauty. 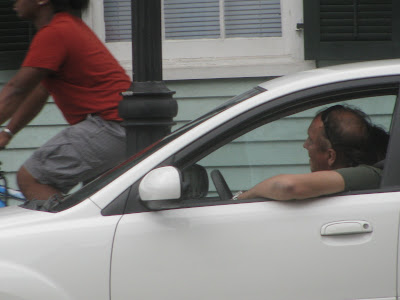 Riding a bike with a minimum of skill is a thing of elegance. 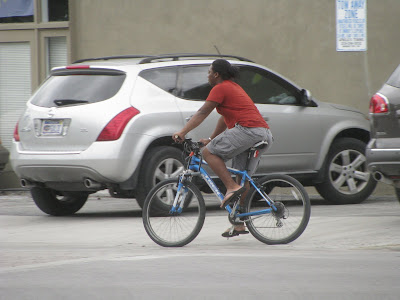 Or it can be a thing of physical pain. The pirate shown below is hanging 8 pounds (3.7 kilograms) of water from his arm. On the other hand a longer arm could be helpful to him in other areas of his life. 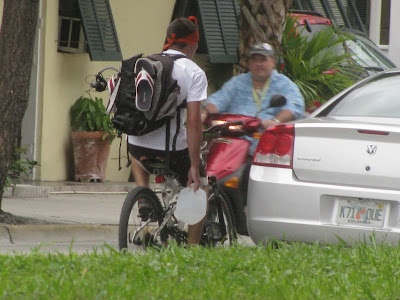 Friends let friends ride scooters and cruise Key West together. Cute aren't they? And remember they are getting miles to the cup of gasoline. What would happen if they behaved like this at home? 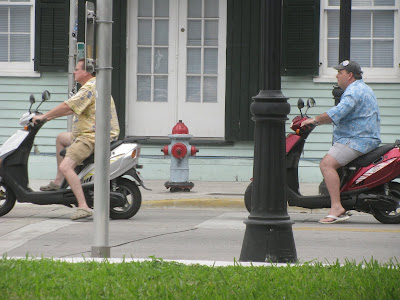 This is my idea of the perfect wheels, sturdy sensible, a covered chain, lights and room for luggage. Across the street the tourist checking the map failed completely to walk into a car. I was hoping for a pratfall. 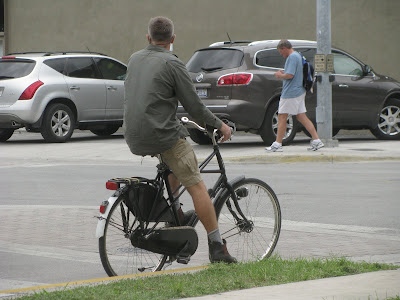 Do not drag your feet as you ride a scooter or motorcycle. It looks stupid and illustrates the fact that you are an anti-science Tea Party member who doesn't understand how gyroscopes work. Plus, if you whack your foot at 25 miles an hour you will get a $30,000 bill from your health "insurance" company and you will walk with a limp for the rest of your life. I'm still limping a month after I rode my Bonneville over my ankle in Pennsylvania and I was wearing motorcycle boots at the time. 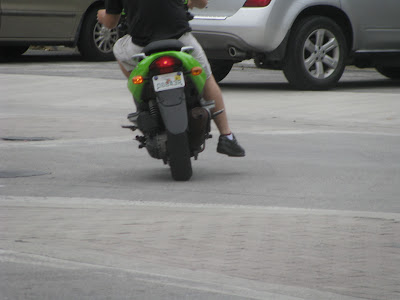 One inflexible rule of being a Key West tourist is men always go at the front, walking, riding a tandem or cycling. Why? Ask riepe, I haven't a clue. 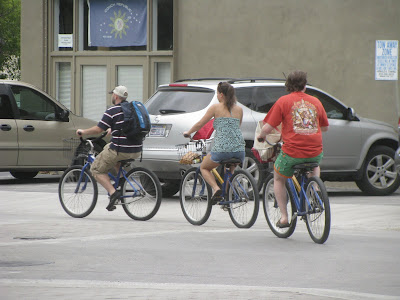 Some lucky bastard is getting a Badboy Burrito delivered down Whitehead Street. The best (only) burritos in town get delivered by Vespa, of course. The best for the best. 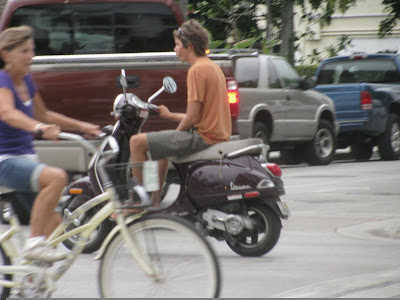 A convertible for the fearful is the next best way to see the Key West sky. My wife is still enjoying her Sebring. And I am under orders to deliver her Vespa 150 to work for her to use around town. I have been prevaricating as I enjoy riding the ET4 from time to time. 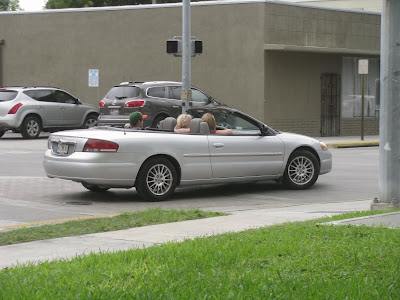 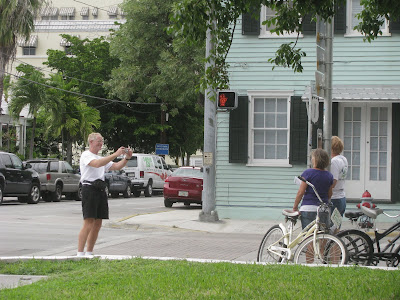 On this occasion I had a moment between dog walks downtown and I sat at the county building waiting to see who would happen along. These were the only photographers who showed up so clearly I'll need to come back during the winter. They look pretty serious so there is potential for some fun pictures this winter. 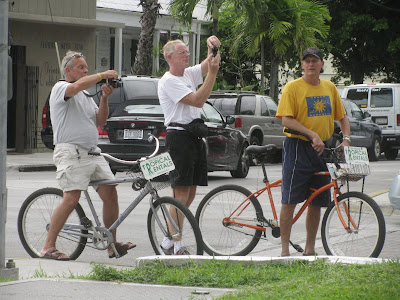 Bobskoot keeps threatening to show up in Key West with Jack riepe; I can hardly imagine Mr Fussy being dragged around the titty bars by Mr Foul. Bob is so wedded to the idea that he's sending Jack some money to help him get down here. Bob is a Corvette driver, though I don't think he's bringing his car as Jack and his arthritis wouldn't fit. 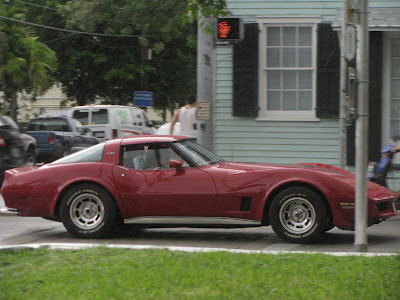 Then the rain started and the government workers, the next privileged class to be dragged into insolvency by our homespun wild eyed clerics, discovered they had forgotten their umbrellas. 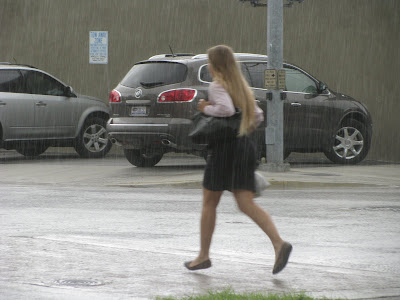 Not many scooter riders carry waterproofs, so like the improvident virgins in the Good Book they find themselves without their lamp oil at the critical moment when it is most needed. 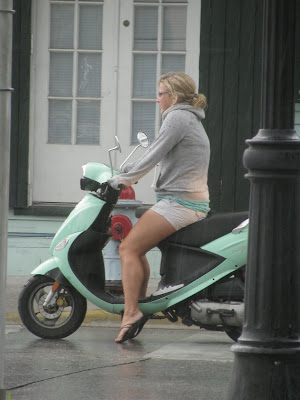 If you are bald and butch a little rain doesn't hurt. Get undercover and run a piece of newspaper over your head and you are ready for the wet t-shirt contest. 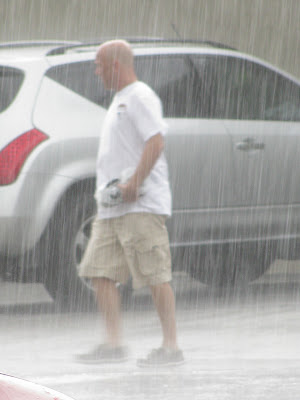 There was another misanthrope sitting a few feet down form me in the arcade at the court house. He was amusing himself with a book, I was taking random pictures and Cheyenne was watching the world go by. We were all happy. Except the homeless dude who shambled off grumping, presumably because we were cluttering up his living room. 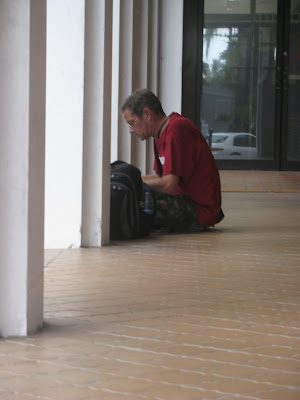 Finally, a sensible person properly equipped for the forecast. 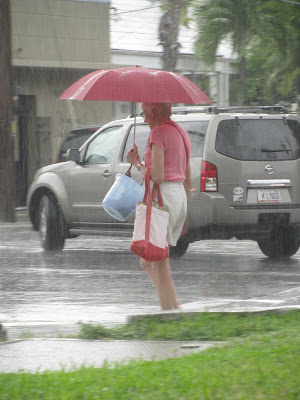 Horrors! It dawned on me suddenly she only looks sensible from the ankles up. 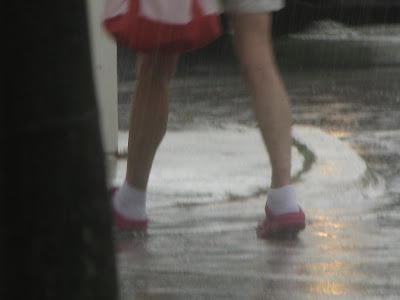 Sensible people started showing up from all points of the compass. 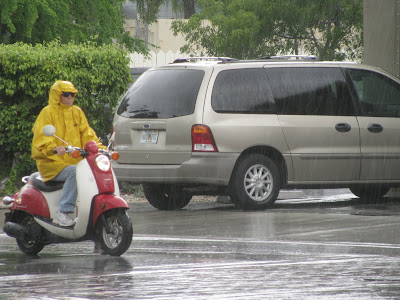 Rain washed out my attempts to hang with the Parrotheads this past week. I was on my way Thursday and got massively washed out before work. Friday my appointment went late and so it went. So I took a commemorative picture instead. 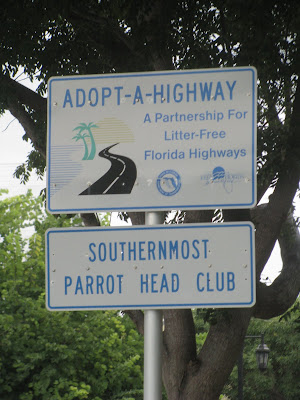 The zero mile marker has gathered a few extra signs over the years because I guess everyone wants a piece of the action. This sign is at Whitehead and Fleming Streets, an otherwise undistinguished intersection for one very good reason. 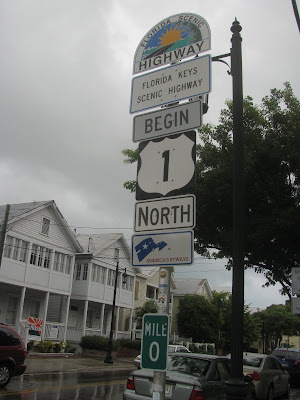 It's where the seat of power resides in Monroe County, the county court house, symbol of government. 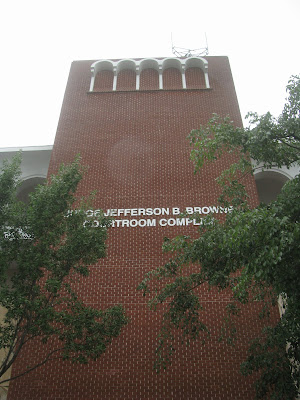 For some it is an oppressor, for others it offers shelter, so I left him to it. 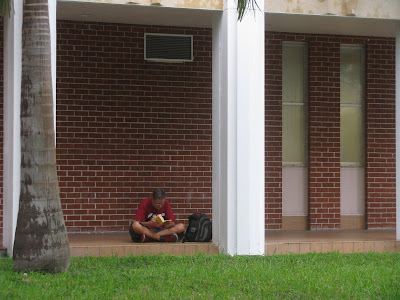 As an aside Wikipedia has a picture of the other end of the road, 2300 miles away. 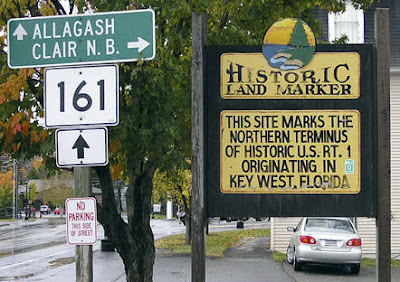 I expect Fort Kent, Maine is under six feet of snow by now. I wish them joy of it.