A Busy Day In Italy

Modena is a small town in the flatlands of Northern Italy where they grow rice and age Parmesan and make their famous balsamic vinegar. 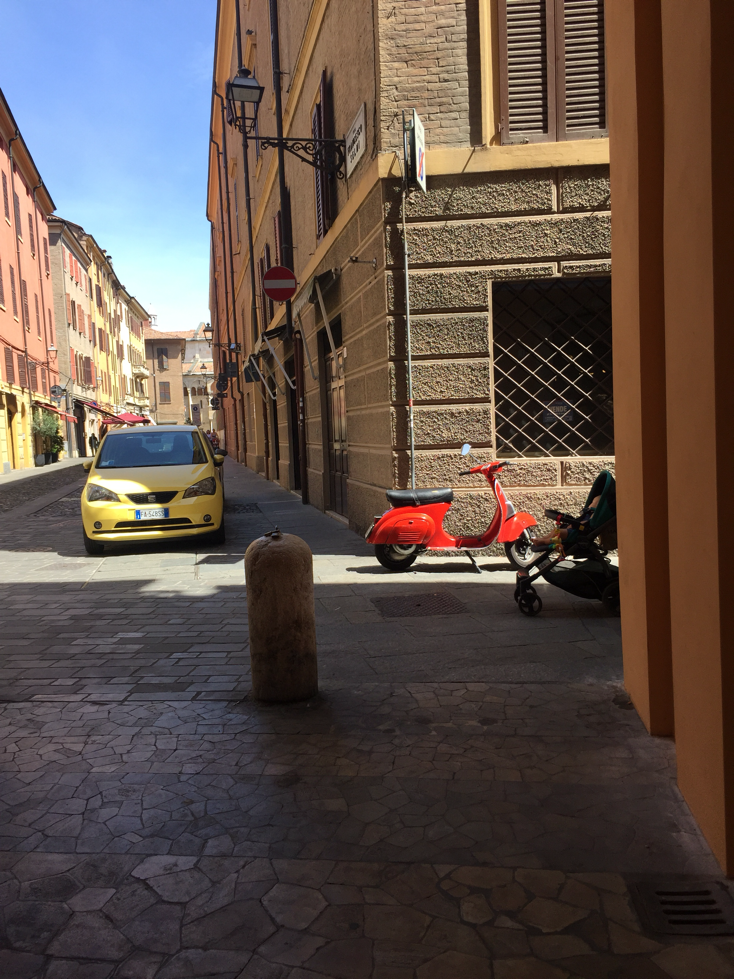 And this is the city that is also home to the restaurant rated best in Italy and second best in the world with three Michelin stars. The unobtrusive entrance to Osteria Francescana. 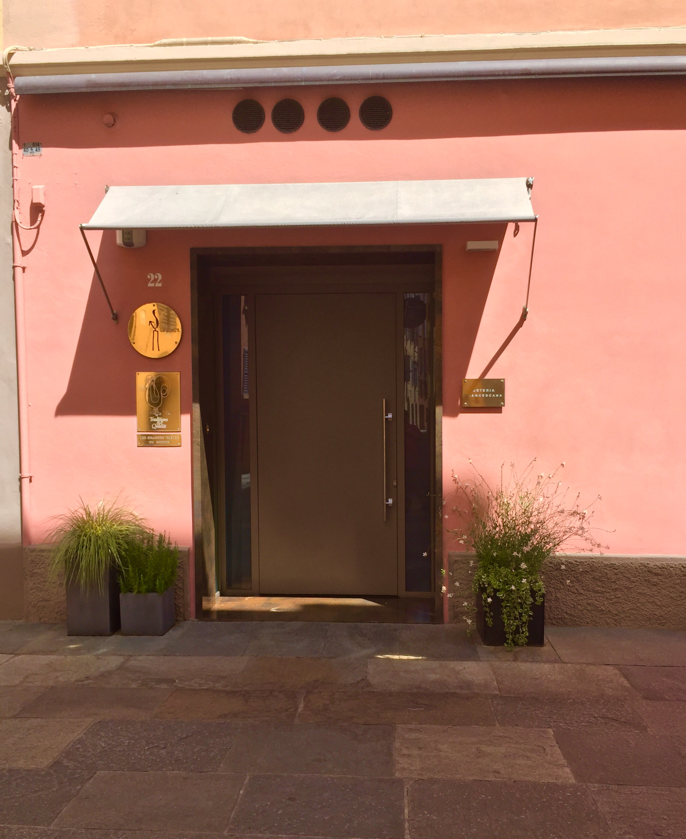 I got a table for two by repeated online efforts and making myself available when someone cancelled their place. We arrived early of course and spent some time in the nearby church veered market where naturally we bought some vinegar. 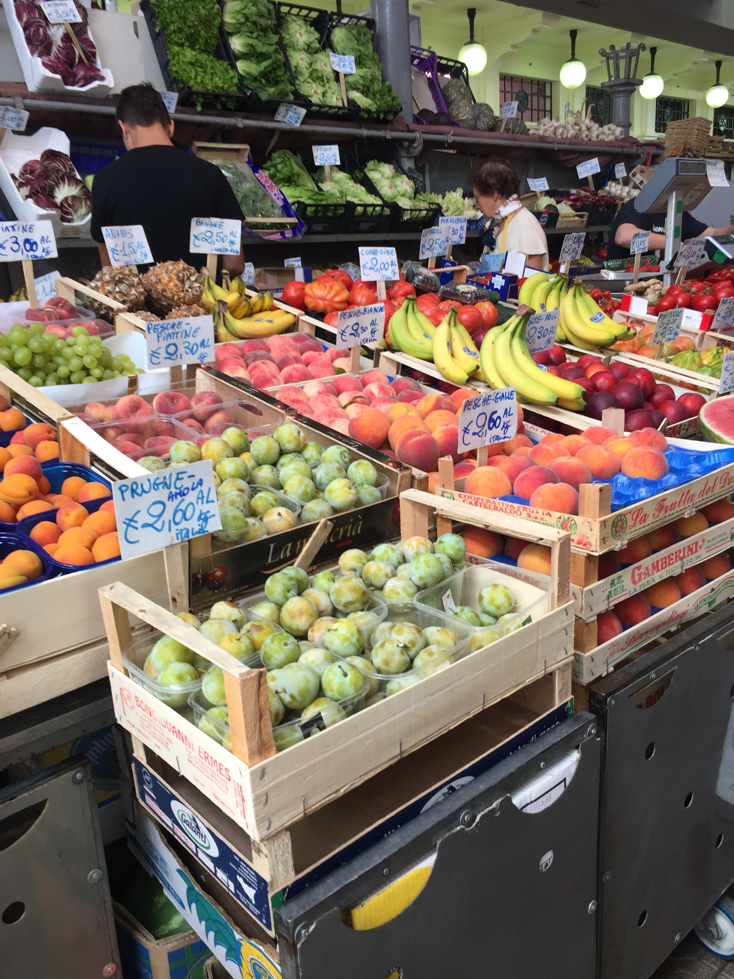 The northern plains of Italy suffer terrible winters so residents like to duck out of the fog and rain underneath the arches lining many older city streets.  In summer they offer shade: 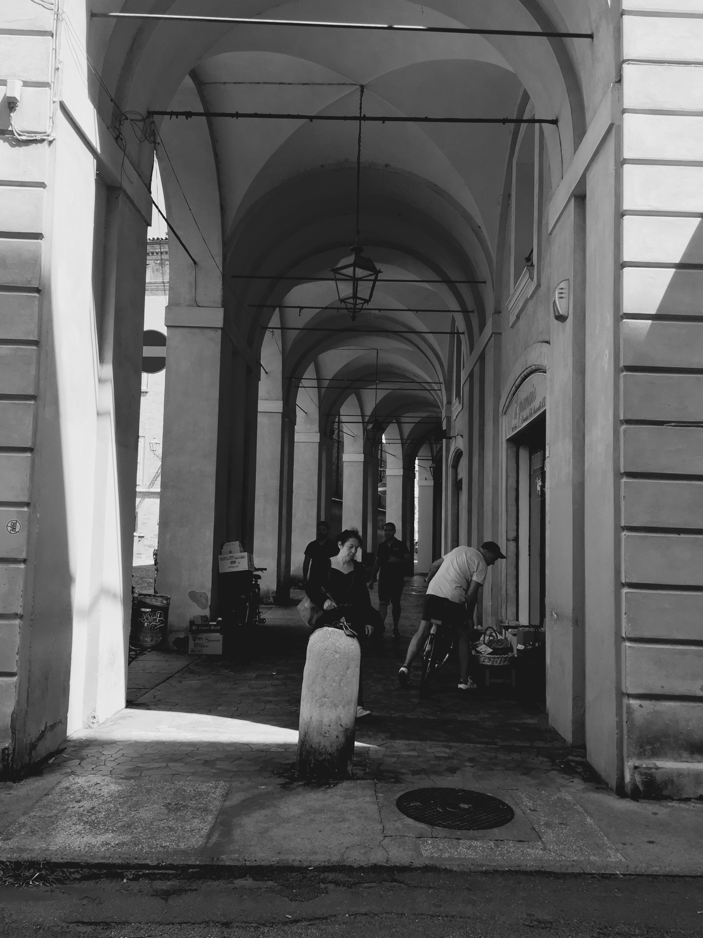 We checked the local covered market which we had visited previously, where my wife bought some vinegar and some bottled kitchen additions, pickles and the like.  Had we an apparent,net they had vegetables fruits meats and fish which would make daily shopping quite pleasant. Apparently the owner of Osteria Francescana does just that. 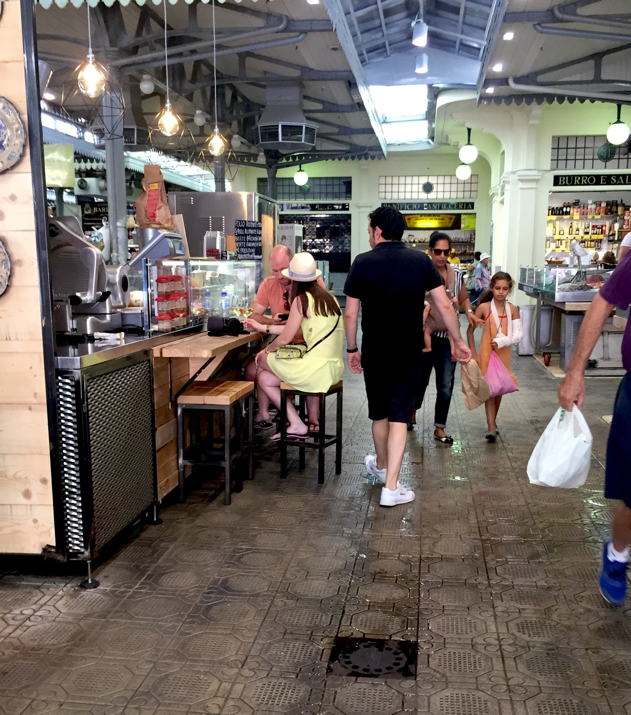 You can't bring meat back to the US but you can bring cheese and packaged foods, so we do. 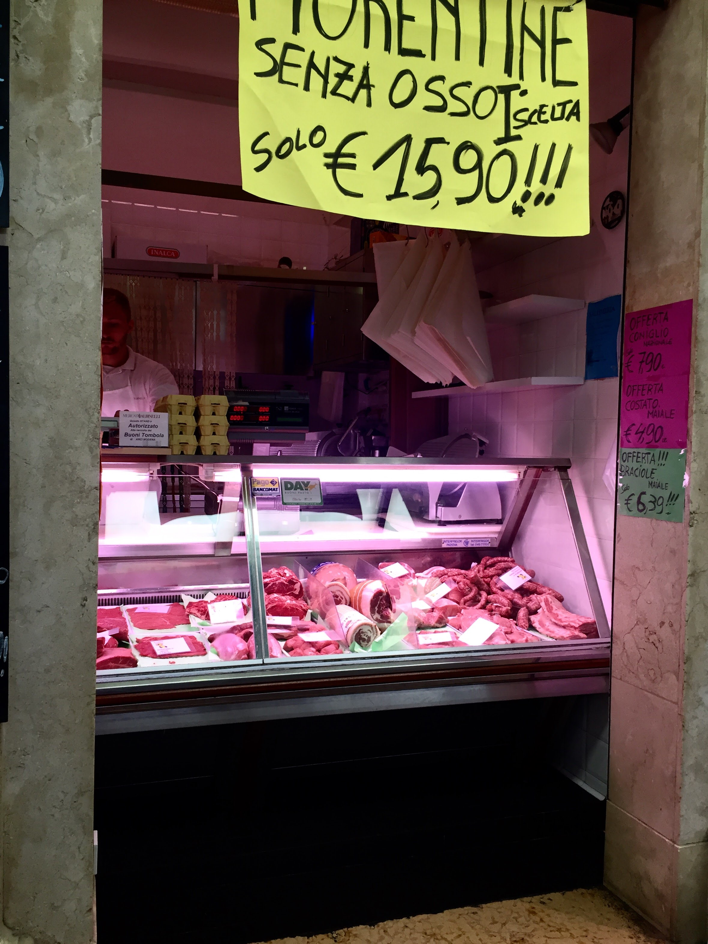 Credit cards are widely accepted at your average tourist haunts but not at local stores. Italians think paying for small amounts with a credit card is weird and merchants hate paying the fees. Many would rather not have your business than deal with a card. Carry cash! Your convenience is not their priority. 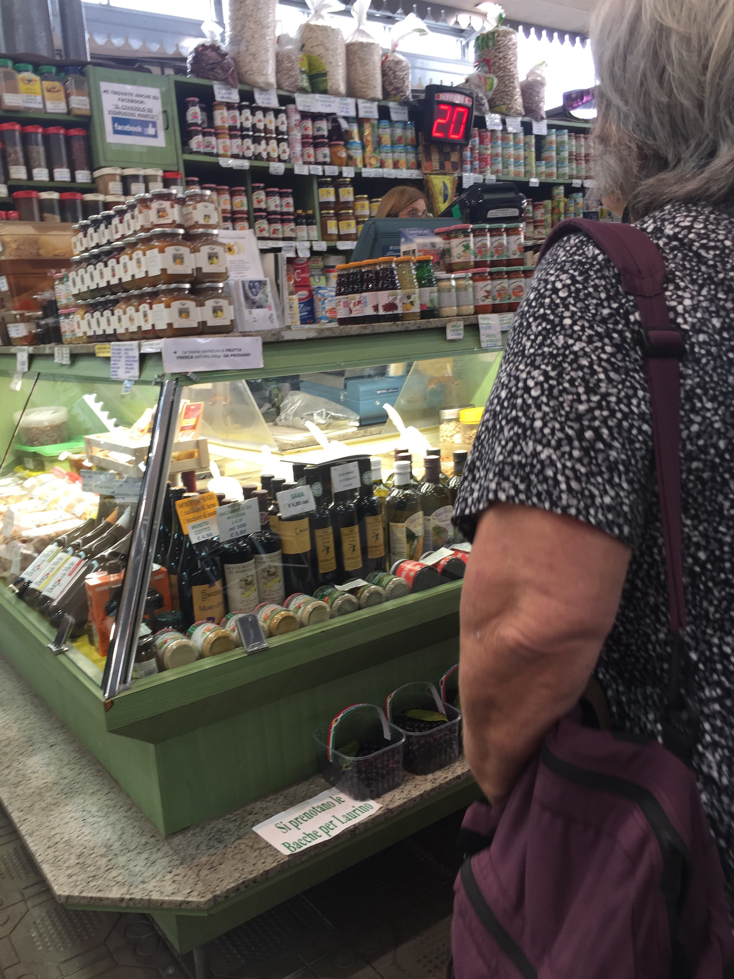 One Euro is worth about $1:20 this year.A five Euro bottle of wine could be described as costing $6.  Exchange rates are complicated because bank fees and charges muddle things up. For instance they changed our rate which we snagged in the US at €1:10 which became €1:20 by the time we got our paper money at First State bank to take to Italy with us... 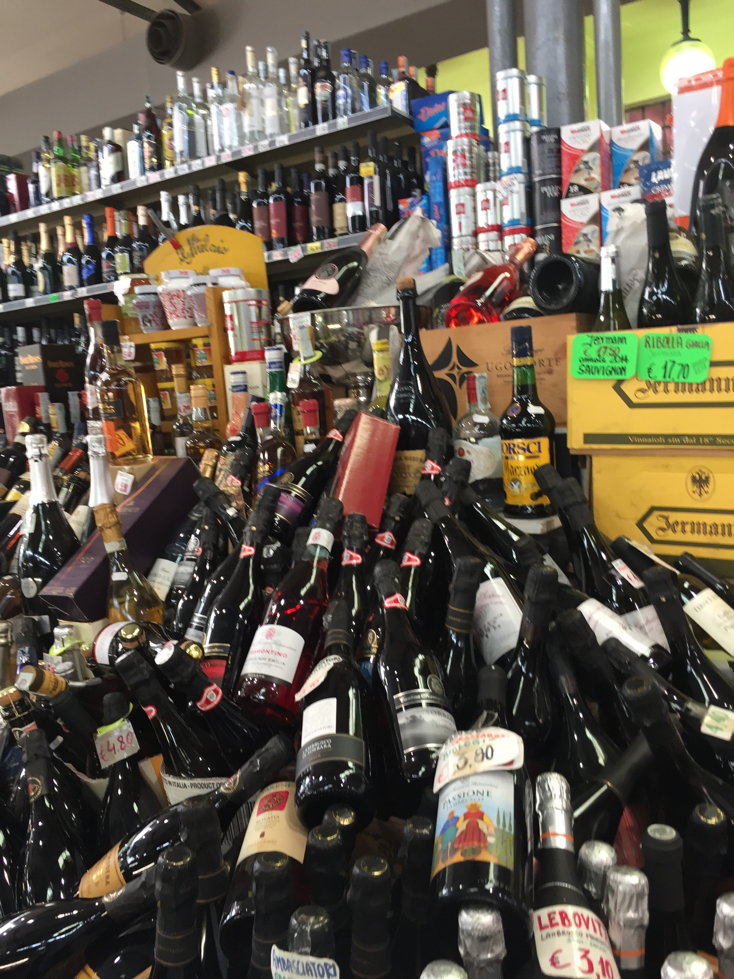 We got back at the eatery two minutes before time. We stood around ignoring each other like customers approaching a disreputable business and suddenly a wild haired man, thin as a stick rushed by, waved, announcing in accented English he'd be ready in five minutes. A wave of adulation and clicking cameras followed Massimo Bottura round the corner and then the doors opened. English is the first language of the Osteria with its customers. My Italian fluency took them by surprise. 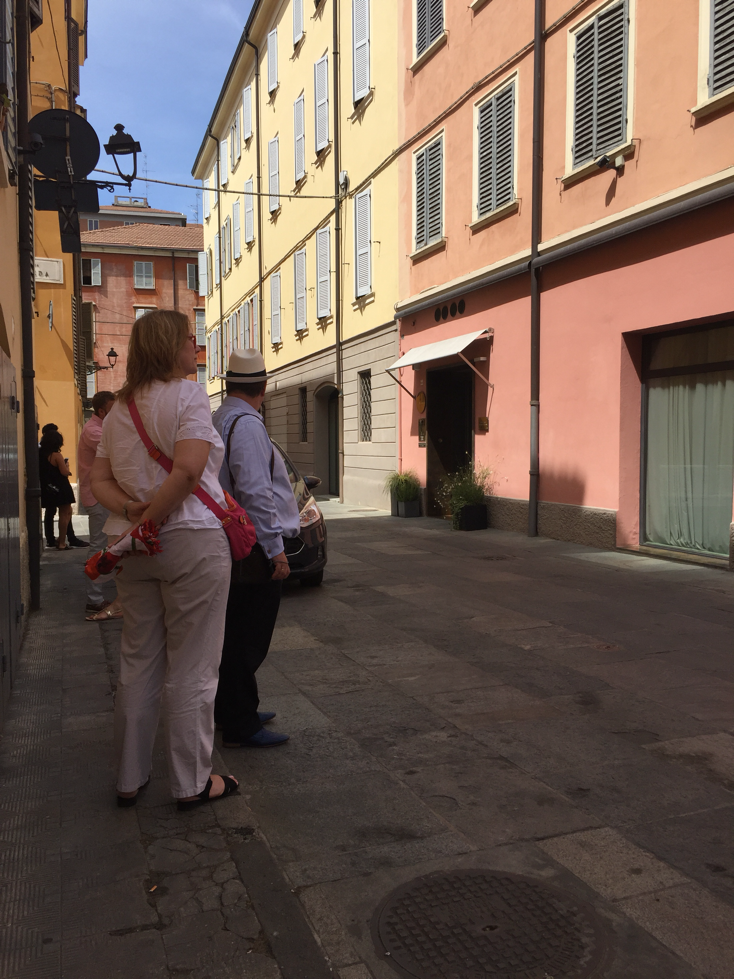 It was a remarkable meal, shown below the off-the-menu amuse bouche which by itself was fish four ways, intense falcons such that I was glad to get a mere taste and not face a whole plate of the tiny delicacies. There were about 15 courses including the famous five seasons of Parmesan, the cheese reduced to foam, cream and mousse covered by a slice of delicately fried cheese. This dish made the restaurant famous. 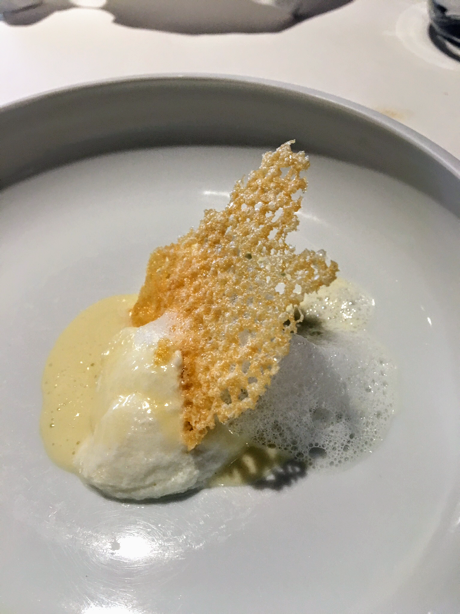 I quitE liked their play on popcorn, brought to the table on a plate with a big cup. Te waiters are happy to pose for the cam area oddly. Everyone was recording their meal.  At first I was shy but my wife took these pictures for us. 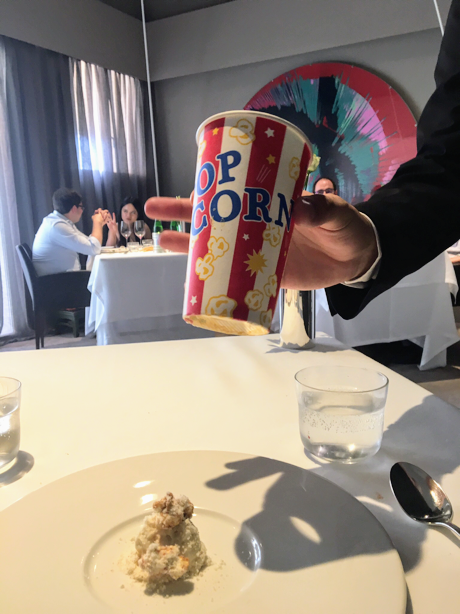 Oops I dropped the lemon tart! is a dish famously created after a chef dropped the last tart and Bottura was forced to improvise. So he made the mistake into his best known dessert, offered on an artistically broken plate.  Tasted like Key Lime Pie to me but maybe I was just missing Key West. 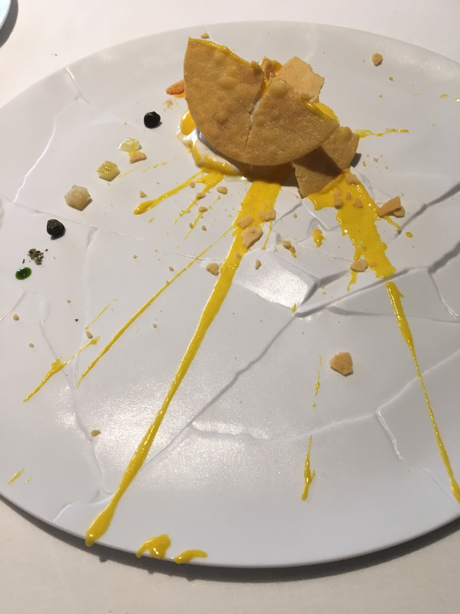 He came by each table and said a few words.  I find it uncomfortable taking to the chef and I think he much preferred talking to the windbag behind us.he did talk about his soup kitchen program using his fame to bring attention to the idea of feeding the poor nourishing tasty food in dignified surroundings. 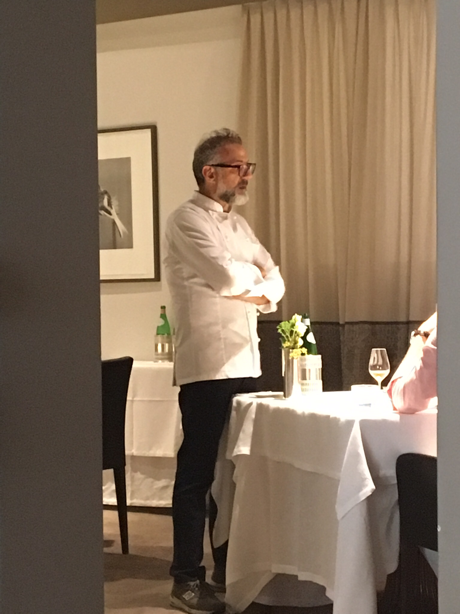 That human decency alleviates the stress of paying seven hundred dollars for two lunches without wine.  We did take a glass ofbubblyItalian prosecco as an aperitif but we had a long day ahead so we chose to save three hundred bucks and not do the wine pairing.  In the end all I can say is it was an experience and I'm glad we did it but I can't see doing it again. I'd rather spend the money there than at Disney World but I am likely in a minority. 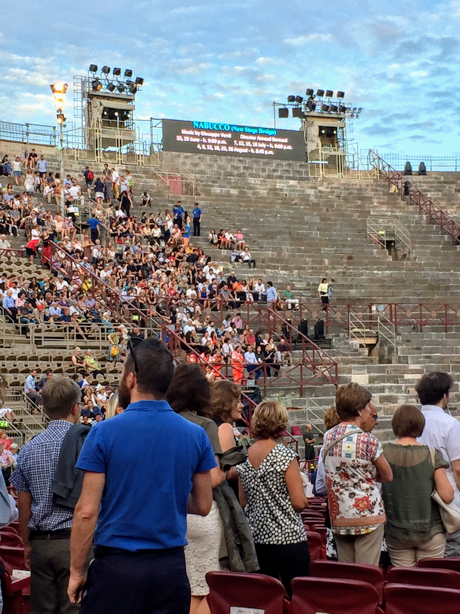 For whatever reason my wife had decided she wanted to attend an opera, something she did once as a child of which she had no memory. I have long wanted to go to the Arena di Verona, an open air opera performance in a Roman Amphitheater. The show started at nine (dusk) and we had a two and a half hour drive from lunch. I didn't know it at the time but they now offer supertitles on the advertising screens shown in the picture above. The titles are in Italian and English and were a boon to my wife who got a lot more out of the performance of Rigoletto which she thoroughly enjoyed. To her surprise. 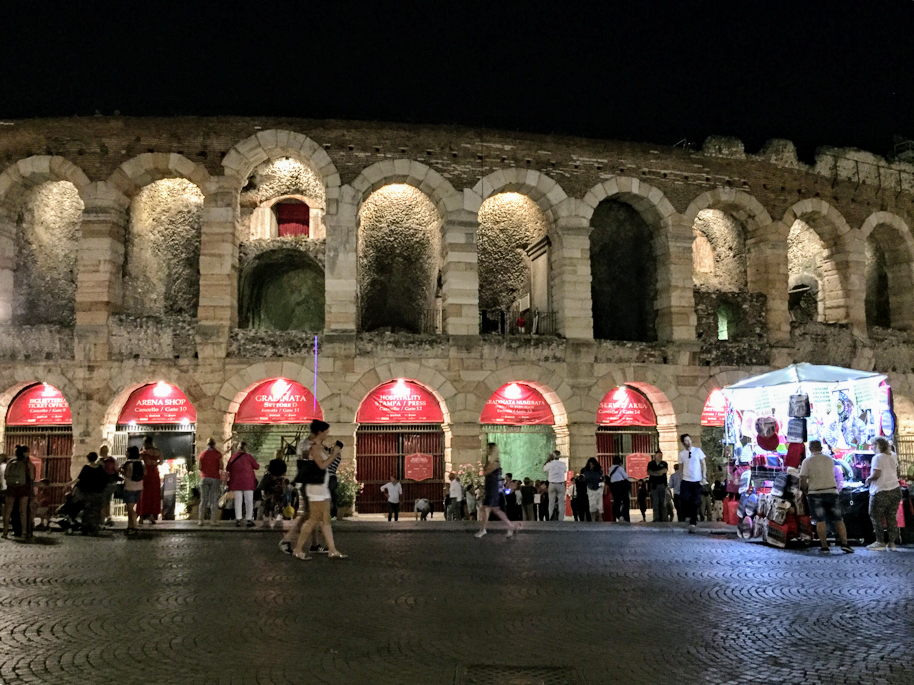 The evening was highly atmospheric and we were smart to sit in the cushioned seats close to the action. Yeah yeah, the stone seats at the top cost $30 and you can wear shorts. Down below we paid $150 each and had to wear long pants which was okay by me. It was not at all cold either and we got to keep our wine glasses as souvenirs which was an intermission bonus. 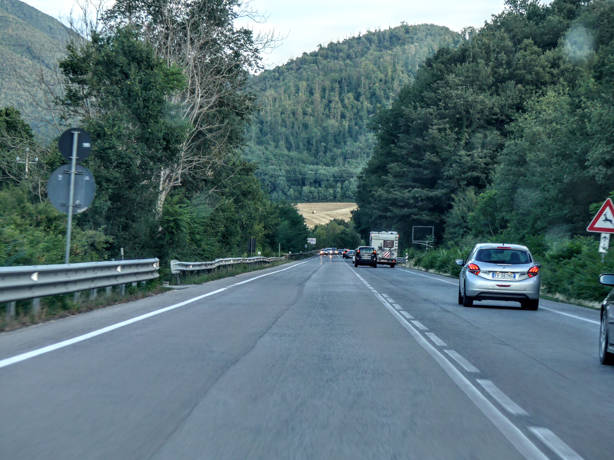 It was a memorable road trip in Giovanni's BMW 520 which he lent to me for our last couple of weeks in Italy. So much went on in the last month it was an outing to Modena and Verona that stood out as being as varied from my regular life as was possible.

Posted by Conchscooter at 4:30 PM 2 comments:

I came home coughing and feverish only to be diagnosed with the 'flu after a nurse stabbed my nostril with a swab, a jab that brought tears to my eyes...Normal service will be resumed on this page as soon as I can get off my sickbed and get out with a camera. Rusty is looking very sleek and fit after his vacation with Shannon and Matt and is waiting patiently for the rest of the household to drop snuffling and hacking.
Apologies. 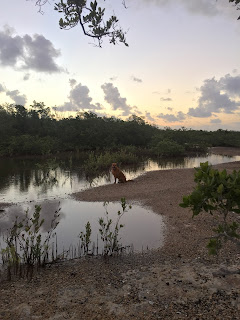 Posted by Conchscooter at 4:33 AM 8 comments: