Christmas is that time of year when it gets  cold, people get stressed and the more we chunter on about it the less that elusive Christmas spirit seems to be abroad. I evade the crass commercial aspects of the season by not listening to commercial radio or watching television and not darkening the doors of stores where the gruesome sounds of caroling are turned into muzak. So I take my pleasure in not being too terribly cold and checking out the lights. Herewith a completely random sample from a shirt sleeved tour of the town last week on a 3 am lunch break. 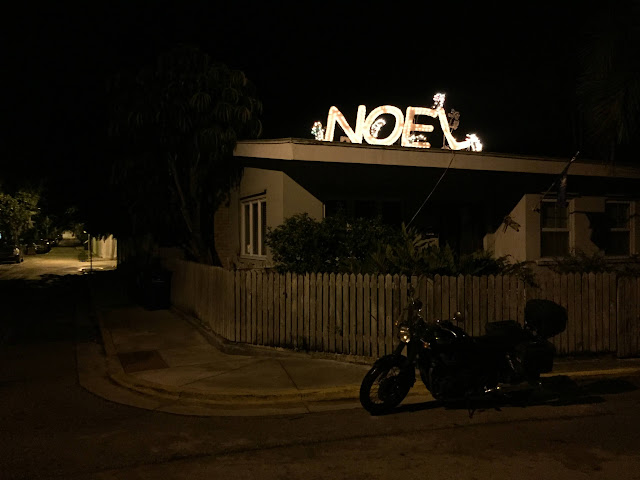 I have great difficulty separating Christmas from commercialism which is why among other reasons I prefer Thanksgiving which holiday is totally North American (tip of the hand to early bird Canada) and gift free, focusing on the get together not the shopping. Black Friday is of course off my radar, what can I say, I don't celebrate my birthday either. 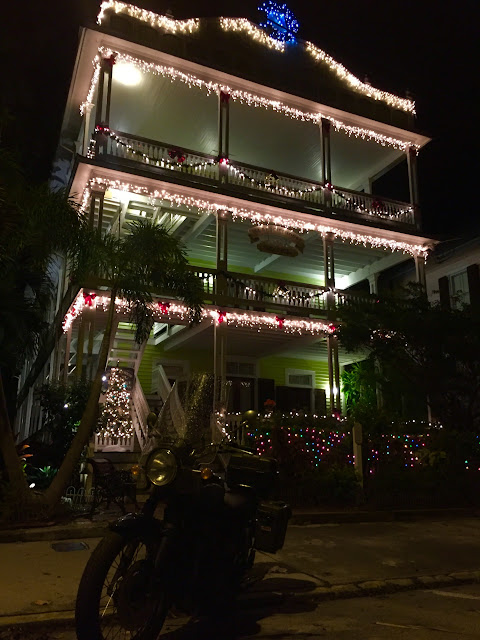 The lights though I like. They are, I accept, a nod to the pagan origins of the Christmas scene, the lights created by humans to keep the winter solstice at bay, which has a rather hollow ring in the tropics where we have plenty of daylight and sunlight in the coldest months but still... no one wants to ignore Christmas. The sun is lower in the sky, it is cooler and that's as wintry as I like to get, 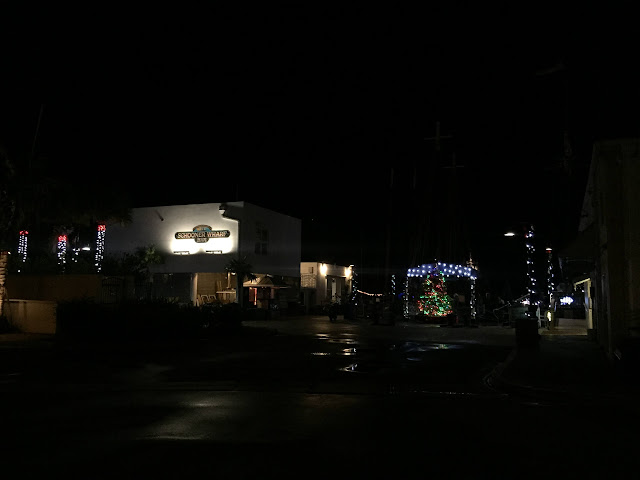 Businesses seem compelled to stick up a  few lights or wreaths in acknowledgement of good cheer though not all displays are created equal and the ironist in me rather enjoys the brighter display of the business sign over the rather coy Festivus pole in the background filling in for a robust sub-arctic fir tree in the background. 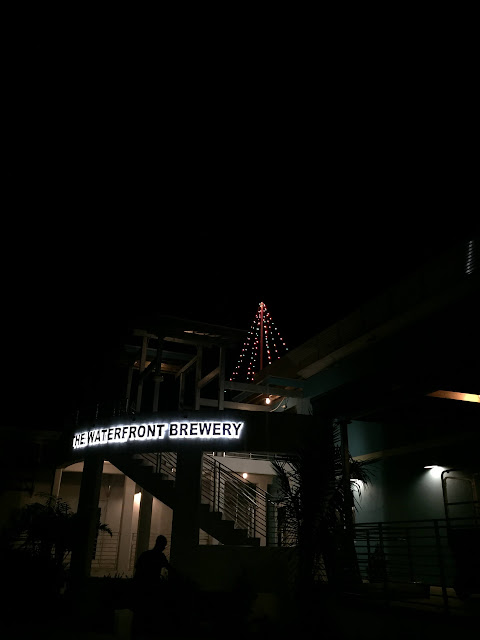 The Western Union struggling to stay afloat thanks to the kindness of strangers gets a bushy tree and lots of lights. Will this display bring in the money to restore the square rigger?  Generosity is the slogan of course at Christmas. 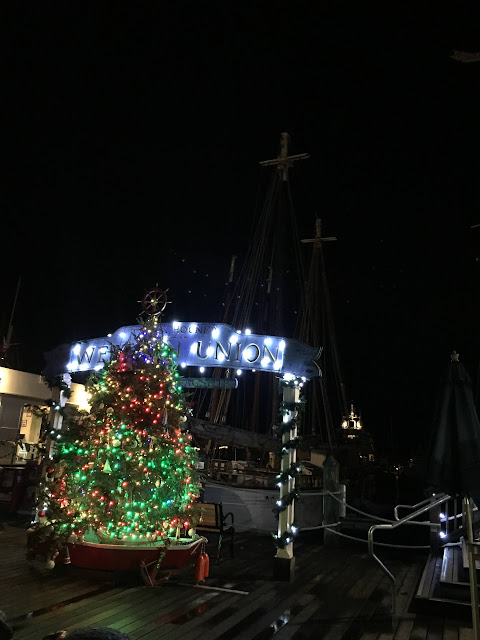 Further up the waterfront the city puts out a bunch of lobster traps, perhaps my favorite rendition of a Yule bush with suitably lit anchors: 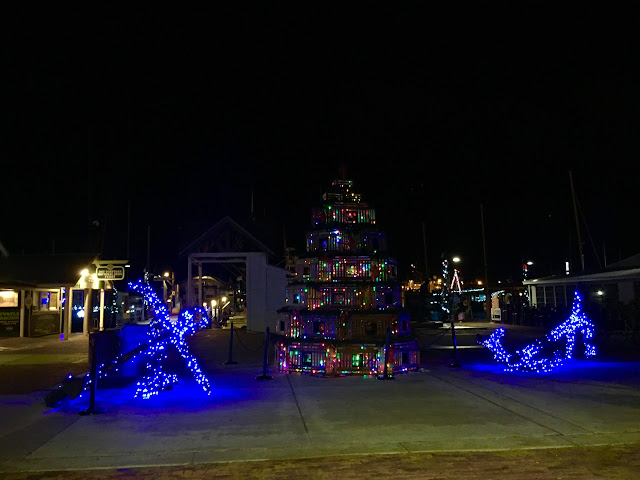 The wreath thing beats me I have to say. They are a bit  like the Easter Bunny, which is nothing to do with Easter of course and all to do with Spring fertility. Somehow German traditions and Scandinavian habits seem to have become the norm and wreaths, which are a symbol of death and mourning to me, becoming Christmas ornaments. 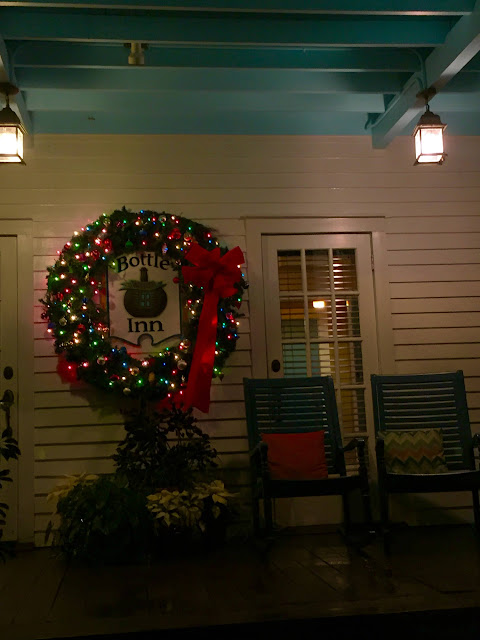 I like the lights especially as they simply  represent the icicles of the winter and light up the characteristic Conch homes in a way that makes December the prettiest month. I know Conchs who have grown up and crave a cold winter day so much that it doesn't feel like Christmas when it's 80 degrees. As they say, if it wasn't for these lights you wouldn't know it was Christmas. Just another blanking hot day in Key West. Personally I'm fine with that,  I like heat. 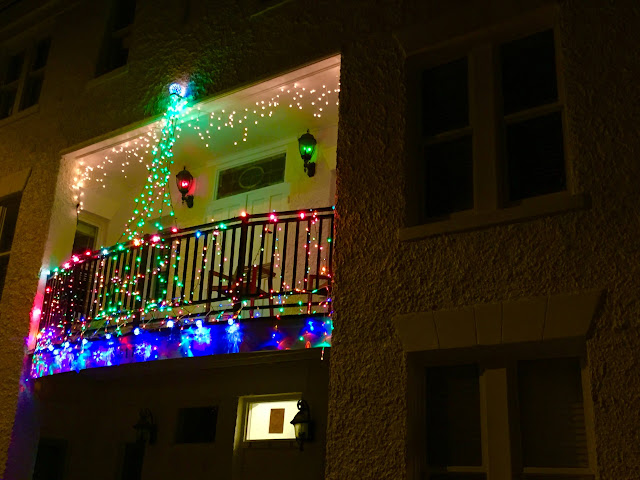 This house cracked me up, the one with Santa in the window dropping down the chimney in some sort of movie projector film. I stood in the middle of Fleming Street watching this ridiculous film loop while laughing like a drain. I think one day I might actually want one of these hings. Santa appears behind a flickering fire with a sack on his back. he puts it down and pulls out a bunch of packages. He looks out the window, waves (I waved back I was so entranced) hoists his sack and buggers off. Great stuff and then the loop starts again of course. 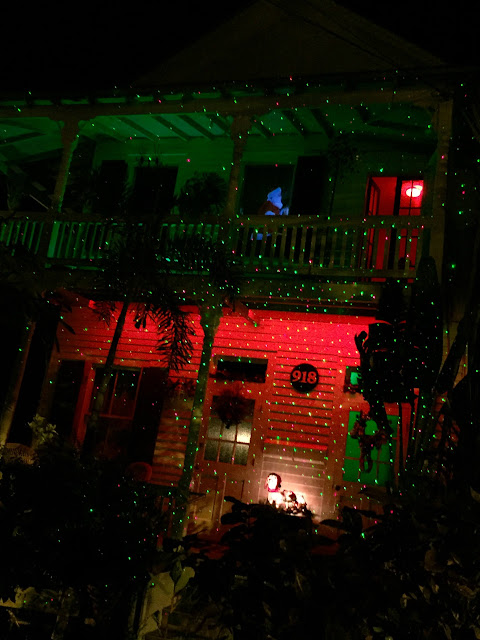 From the ridiculous to he sublime and for those hardy souls who like a home made Christmas this display in an art store further up Fleming. 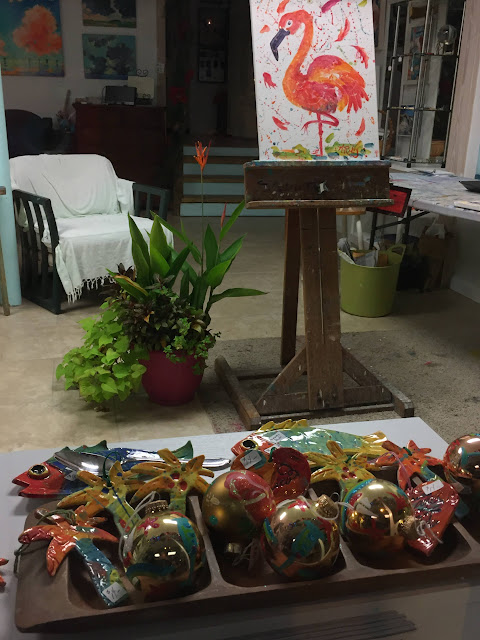 Impressive stuff. Merry Christmas.
Posted by Conchscooter at 12:00 AM 5 comments: