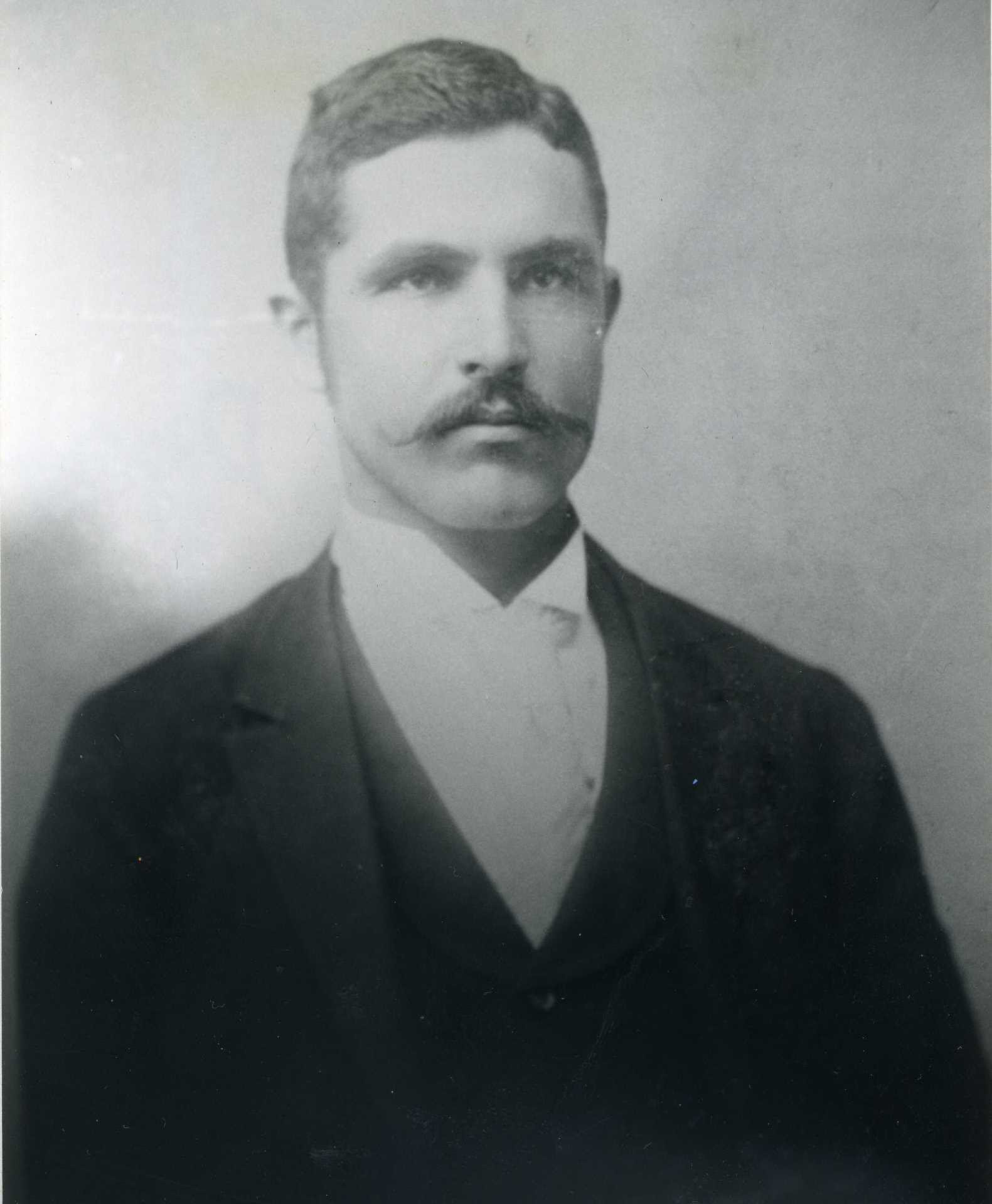 First published January 7th 2010 I was put in mind of DuPont Lane recently when I had a Trainee in dispatch who had never heard of the lane and thus had no idea who it was named after. And now it's 2015 and I haven't been back to take pictures so here we are. 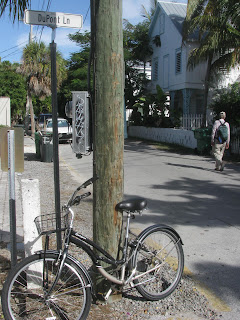 Key West managed somehow to elect a black Sheriff in 1889 and his name was Charles Fletcher Dupont, the son of freed slaves. He has a lane named for him east of Duval off Petronia Street. 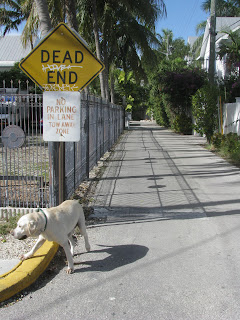 DuPont wasn't the first black Sheriff of Monroe County, that was James A Roberts who was appointed in 1877 and the first lawman killed in the line of duty in the county was also black as it happens, a Sheriff's deputy called Frank Adams was shot to death while trying to effect an arrest in the city in 1902. You'll hear his name come up at the head of the mercifully short roll of officers who have died every time there is a memorial service in their memory. The entrance to this very short lane is marked by this rather startlingly imposing wrought iron fence. The lane itself is short, but half a block long though unusually for these kinds of streets in Key West it has an ample turn around at the dead end. It is lined with plush mansions: 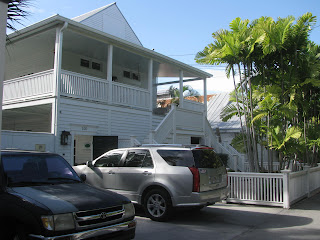 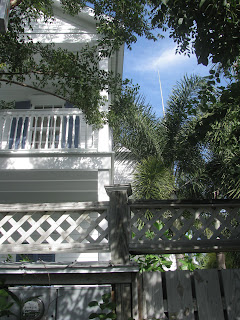 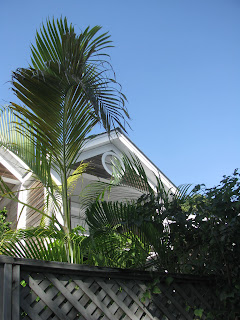 And at the dead end it makes a sharp turn into this tunnel like walkway. 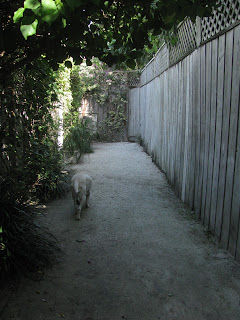 The fence is so high that I felt like I was in a cave looking out at the sky: 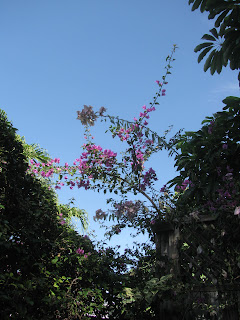 And seeing hurricane shutters still up, blocking out the sparkling winter sun: 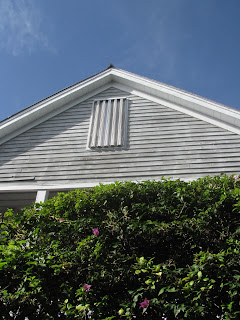 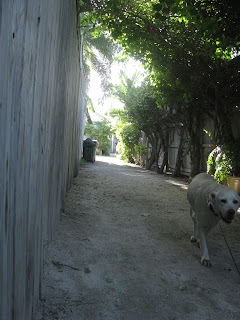 These are my favorite Key West colors, white and green and sky blue: 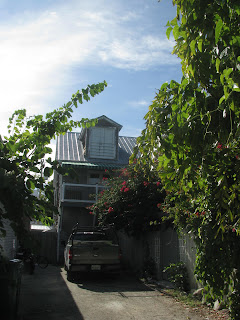 A carpenter was busy improving some already magnificent home, his workshop was outdoors though his concession to the season was a sweat shirt: 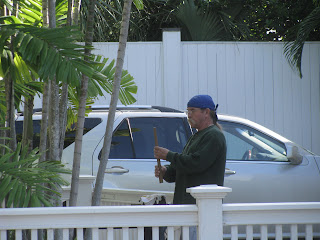 "Good fences make good neighbors" is an ironic quotation frequently attributed to the poet Robert Frost (whom the hospitality industry make great play of as a winter visitor to Key West) and on DuPont Lane they do certainly make the little street rather more blank and uninteresting than others of it's type. 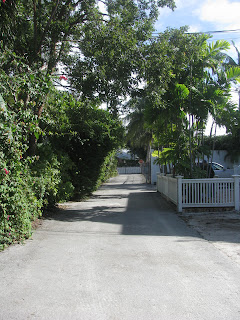 This example of over sized, protective picket fence was staffed by two extremely yappy little dogs who stuck their obnoxious snouts between the pickets and dared Cheyenne to approach. She ignored them, reminding me once again that the prejudice against silent, easy going big dogs, and in favor of noisy small brats is arbitrary and misplaced. 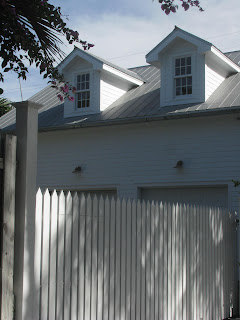 This picture I took looking east along Petronia toward Simonton, a much more varied neighborhood street than DuPont. 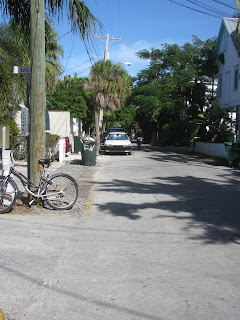 And this night picture of DuPont I used in my post New Year's Eve essay contrasting the peace and quiet of the lane to the trashed nature of Duval street the morning after. 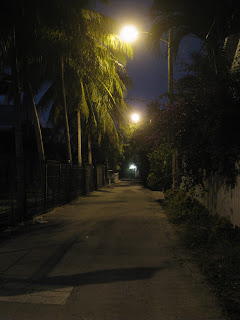 There is a very complete article with photos at this website if you want to see and learn more about Charles DuPont:
http://thenewtimesholler.com/ARCHIVE/chaldupont.html