Visitors to Key West love to check out the street chickens; I love to check out the bicycle tours. Unlike the chickens I see the pleasure in taking a bike tour of this town. But they still look funny to me, obediently peeling off and chasing after the mother duck flapping down Whitehead Street. "And over here we see a royal poinciana with fierce orange flowers....and over there the Hemingway House..." and obediently heads swivel. 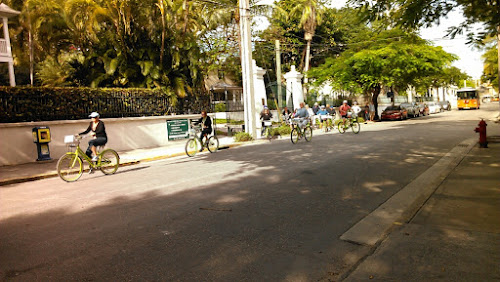 And then there are the disorganized tours by family and friends who cruise around on bicycles, which I figure is a mode of transport reserved solely for vacations and time off. I wonder what the men leading the family parade (its always the men) would say if you gently suggested they ride to work. 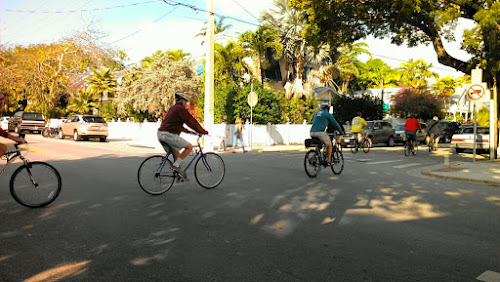 I was goofing off looking at weird shit like these terracotta roosters with Cheyenne wandering and following her nose and some dude came stomping by and glared at me as he had to half side step my distracted dog. I was slightly surprised, but I suppose I shouldn't have been, he didn't trip over her leash, he didn't step into the street, and Cheyenne didn't stick her nose in his crotch so perhaps that was what miffed him. But the funny part was he was a middle aged dude dressed like a school kid trying to look fashionable or something. 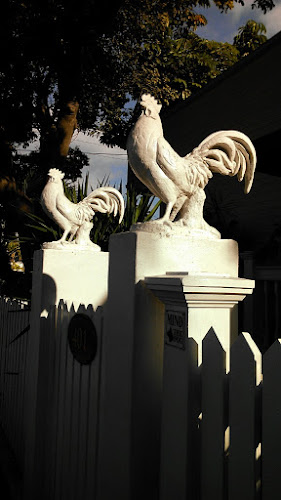 Key West is a small town so the fact I wasn't so terribly surprised to come across the same stern walker a few blocks later still marching along looking like some grumpy juvenile who'd lost his team and couldn't find them. I hope I didn't wreck his entire vacation by not paying attention to his high visibility neediness, but I rather fear I might have. 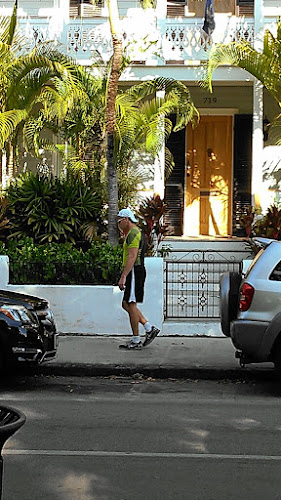 I find it comforting people show up on the sidewalks as they are, not seeking color coordination or fashion as their guides. I feel I stick out a whole lot less in my perennial state of deshabille when my sidewalk neighbor looks like he got dressed in the dark. And the dude in the background is not on a bike tour. He's using a cellphone on his way to work. 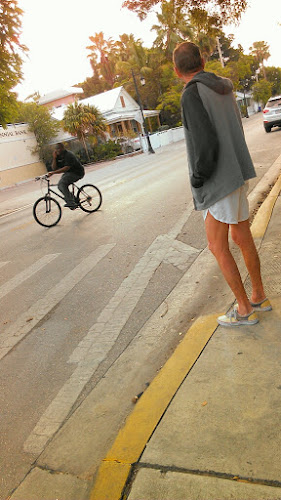 Cheyenne wanted a rest so she parked herself on the courthouse lawn and I watched the world go by. I think I lost my mind for a while because this pink building that I've seen half a hundred times suddenly inspired me to take a picture. It looked somehow, I don't know evocative. Old, perhaps, lived in... 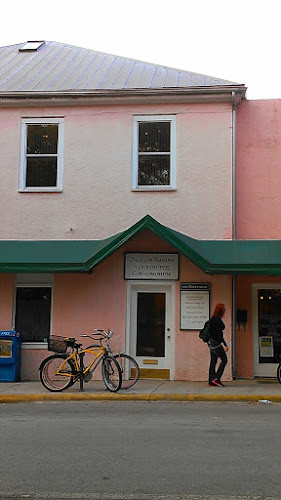 Well perhaps not as a pink building. How about a sepia tone? 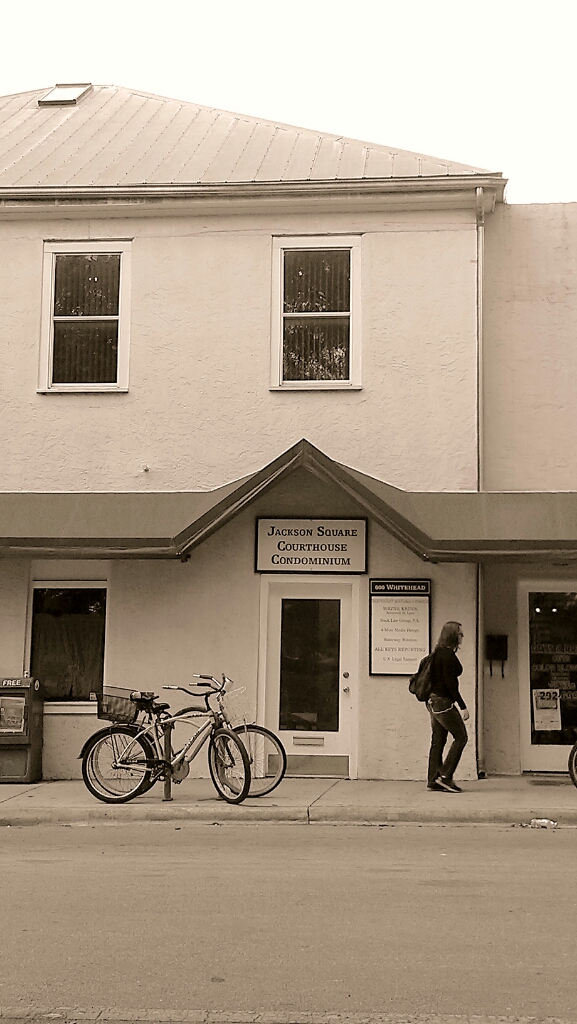 Or better yet, how about giving it a peephole camera obscura look? I thought that looked how I wanted it to look. Modern phone cameras are amazing. I happily wiled away a few minutes fiddling around with the editing function in my HTC Android. I turned Southard Street into an unmemorable house in..Northern France? 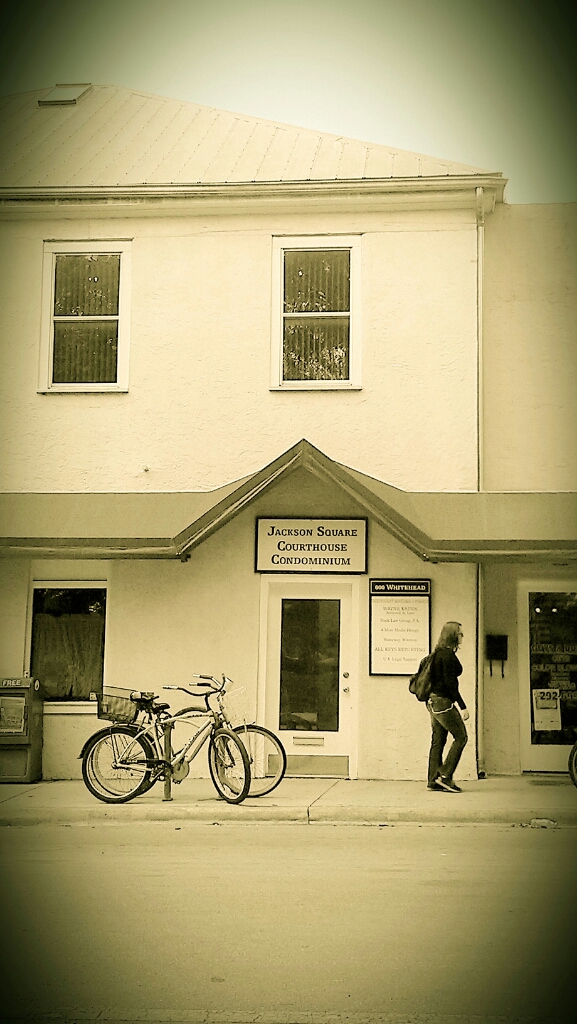 The jury will forever be out on whether or not this peculiar contrivance passed muster in her doggy mind. Perhaps there was just the remnants of a long lost sandwich wedged somewhere in all the spray painted mess. It hjeld her interest as long as my senseless act of photography had held mine... 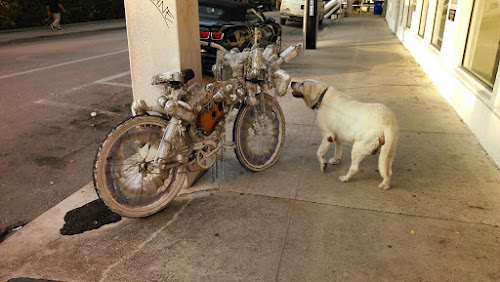 I guess it hasn't rained much in a while because Cheyenne has been enjoying proper clean water from dog bowls, both at home and afield. This one at Casa 325 went over a treat. Even as they cleaned the pathway with more fresh clean water. I was listening to a story on the radio about salt water intrusion in South Florida which is getting worse as sea levels rise, even small amounts. Despite the massive rain we get on the mainland (where the aquifers are located) salt water is penetrating the porous rock and displacing the fresh water which floats on top of the salt. Pumps are being moved inland away from the coastal salt water damage, but I can't begin to imagine how this environmental problem will be explained to the determinedly closed minded local souls who think air water and gasoline are a divine right: no further effort needed on their part, thank you. 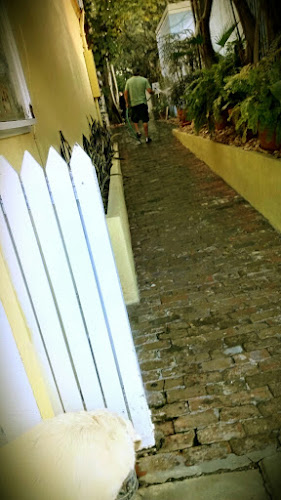 One day maybe we will all be walking, not running or riding street cars... 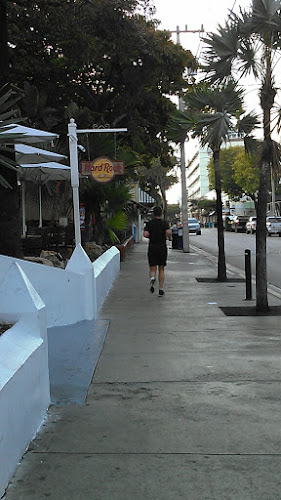 From the Florida State Archives this picture of a street car with Old City Hall on Green Street visible behind it. This is how people got around downtown a hundred years ago, even though there were cars that could drive on a rough track all the way to No Name Key where the ferry transported them to Marathon. And the Flagler Station, a memorial on Caroline Street to a railroad track that washed away never to be replaced and yet today, with all the crowding and angst among drivers on Highway One seems like it might be the best introduction to a string of islands that could very well be connected by rail once again. 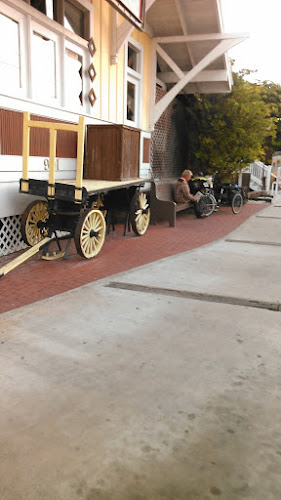 In a town that can't figure out recycling, recreating a rail line, perhaps a monorail as has been proposed with no great conviction, seems far out of intellectual reach. It's possible I suppose that salt water intrusion will make it all moot. Not many people in Miami are mentally equipped to live off cistern water supplied by the rain. I've done it, and I think quite a few people down here might be able to get their heads around that.