I had to do some of those absurd chores that mainland dwellers only ever have to do. Here in paradise stuff like going to the bank and buying milk is not something we have to concern ourselves with, as this is like living in Disneyworld and everyday chores happen effortlessly after dark when the Disney gnomes and janitors come out and re-stock our fridges and launder our costumes for us so we can go about our day being locals in the Fabulous Florida Keys. 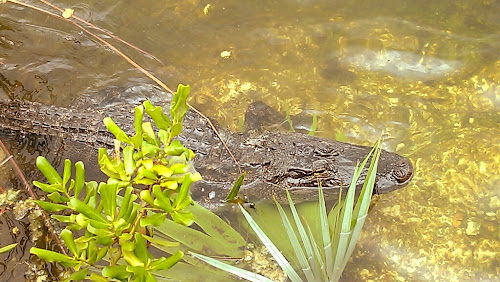 Which is not exactly how it happens in real life so I was in fact going to the bank and Winn Dixie and Cheyenne was snoozing so I figured I might as well ride. It was an overcast cool day and I was having as much as fun as one can have with a Vespa in a  corner of Flatistan not renowned for its variety of roads. But I have been around Big Pine Key a bit so I knew where there were some back roads I hadn't explored in a  while, so yesterday was the day to do just that. 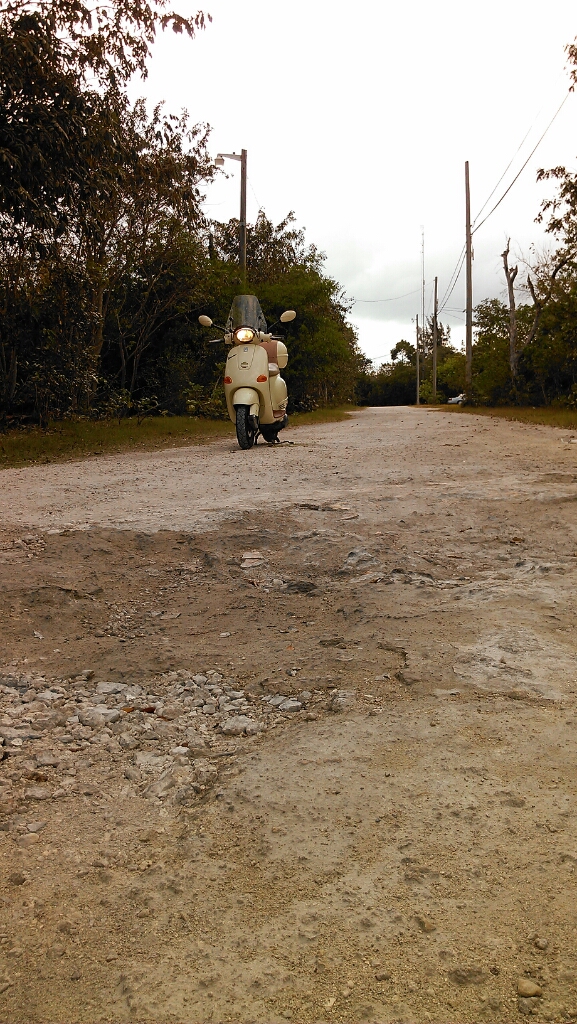 Then  as Ixora became 17th which dead ended into Wilder Road I thought to myself: Self, how can we put off shopping for  food for a little bit longer while having fun puttering by Vespa? Why, we should go and see if there are any alligators at the Blue Hole, self suggested. And, by gum there were alligators in the Blue Hole, two of them sunning themselves in the weak sunshine that had broken through the cloud cover. 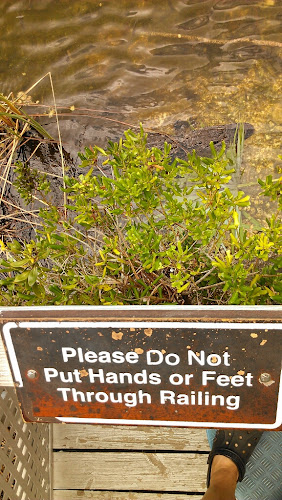 Usually in winter there is always somebody at the Blue Hole, a former gravel quarry on Key Deer Boulevard but  winter season is over and emptiness is starting to prevail. 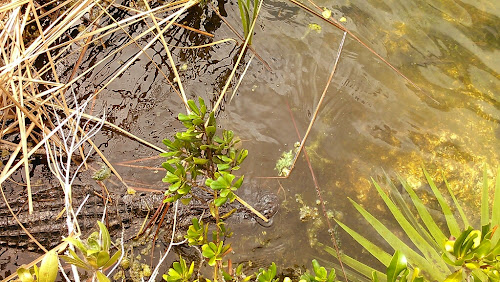 A loud family was walking across the opposite side of the pond but I was alone at the observation deck with two relatively large dinosaurs, the largest perhaps six feet long at most? 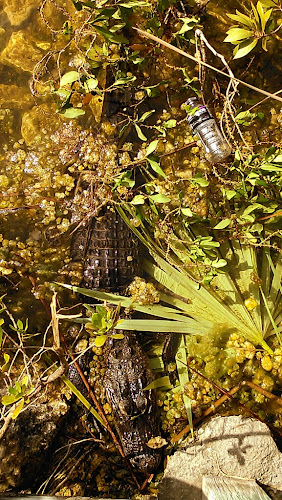 It was me, alone with my alligators, and the usual detritus of human visitors, plastic and trash. I wasn't going to reach in to collect the bottles thoughtlessly hurled into the water, but it was in fact a plastic toy that a previous occupant known as Bacardi swallowed and from which ingestion the alligator died. These creatures have more to fear from us than we from them it turns out. 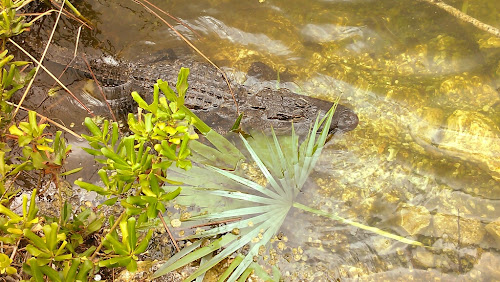 That lesson is brought home to any thinking visitor by the fact that there are no fences keeping these toothy residents away from stupid people ambling the paths around the hole. Last time I brought Cheyenne here she tried to get down to the water to take a drink but she is not necessarily large enough to frighten an alligator so a tight leash is a good idea around here. 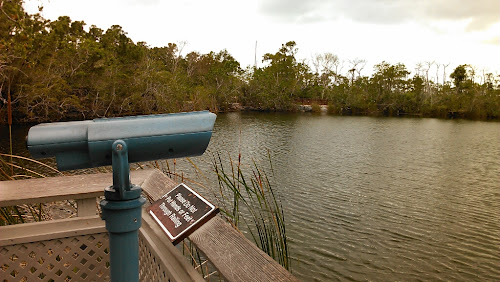 It is true that people do get attacked by alligators in South Florida  so it is wise not to swim in fresh water unless you have a pretty good idea who is in it. The problem with alligators and crocodiles is that they are opportunistic, and will seize and drown victims even if they aren't hungry. they cannot tear very easily with their fixed jaws so they parked their drowned victims in  holes and wait for them to rot. This means that unlike sharks which hunt when hungry usually at dusk and dawn, alligators and crocodiles snag  food when available. 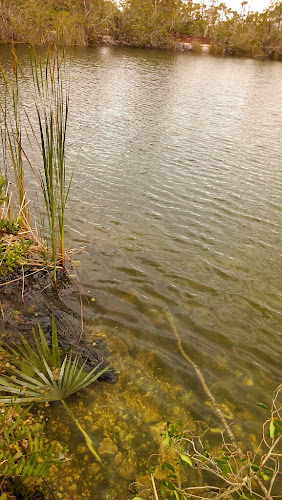 Florida has  an abundance of fresh water alligators but the rather less aggressive (they say) salt water crocodile is endangered. The difference between the two is hard to discern, a slightly more square snout on the crocodile I am told and a shy retiring personality. Supposedly you can find them anywhere in the Keys and Florida Bay but outside Key Largo crocodiles are hardly ever seen and outside the Blue Hole there is no body of fresh water to sustain alligators. 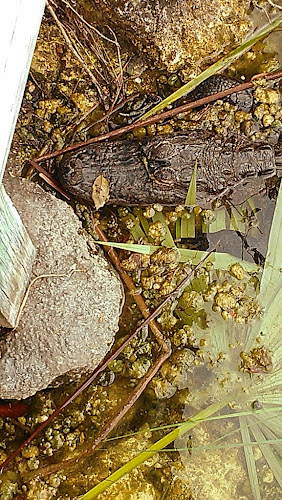 Like pirates, alligators suffer from an image problem that has little to do with the reality of their lives, and like pirates that never hung out in Key West, alligators animate visitors' imaginations more than they do any reality of daily life in the Fabulous Florida Keys. 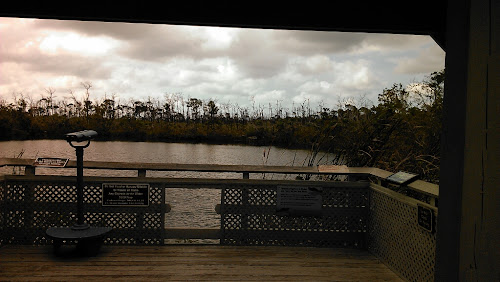 The truth is that laundry plays a far bigger role in daily life around here than alligators. It would be fun to be able to claim that alligator wrestling is a constant feature of an exciting dynamic life around here but you are probably more at risk of dying in a blizzard than I am of encountering an aggressive reptile. 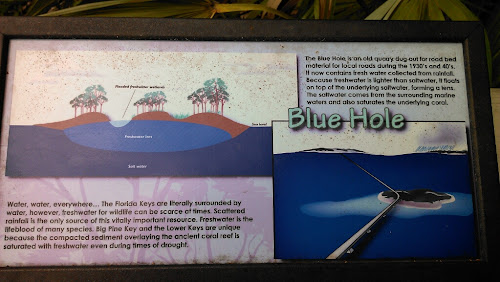 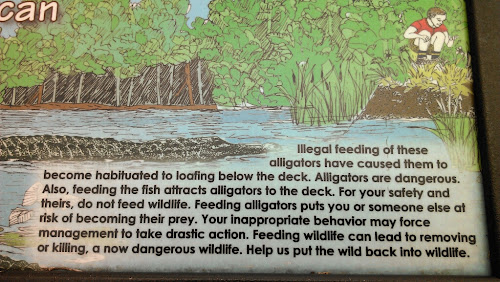 If I am to die a violent death I am far more likely to be run down while amusing myself on two wheels than as lunch for a croc...banal but true.﻿ 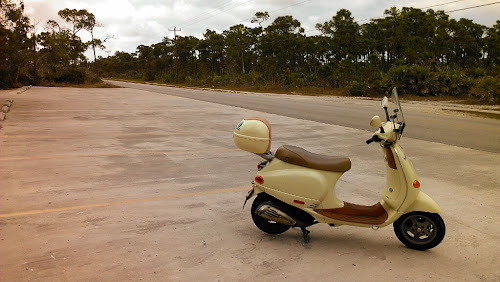 My wife's ET4 Vespa is a mild unassuming thing but like alligators it moves surprisingly fast and has cut off more low self esteem penises on Overseas Highway drivers than you might imagine have been eaten by alligators. I am still waiting for my restored P200 Vespa to be restored to me, but that too should do a nice job of riding faster than car drivers expect and with a manual gearbox it should be easier to explore on dirt on the back roads of Big Pine. At least we know the alligators will always be at the Blue Hole on Big Pine assuming the humans don't kill them.

Posted with Blogsy
Posted by Conchscooter at 1:30 AM 3 comments: