The question was: where are the best conch fritters in Key West? Now in the ordinary course of things answering a simple question like that should be simple, no? Not, as it turns out for me. For a start I had absolutely no clue who sells the best fritters in Key West. So I asked around, as you do. The most assured answer I got was the stand at Mallory Square at sunset. 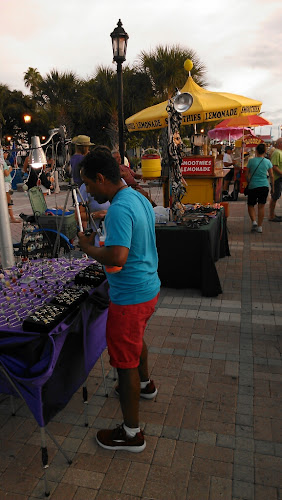 I am not a huge fan of crowds thus I am not often to be found at Mallory Square at sunset. The paradox is that I actually quite like the celebration. I am tired of hearing the story about Tennessee Williams toasting the setting sun's superb performance, not least because I remember Mallory Square when it was a dying commercial wharf and not the neatly tiled tourist venue that it is today. The place where the performers hop for tips in no way resembles it's origins, and that's okay. It's now a place to buy dust catchers, to drop a tip in a tip jar, and it's a place to buy conch fritters it turns out. It's not a place where intoxicated writers take their friends, and one can't help but feel those conversations might have been just a little bit more fun and perhaps we have missed out. Well bugger; but we do have cyclists nowadays. 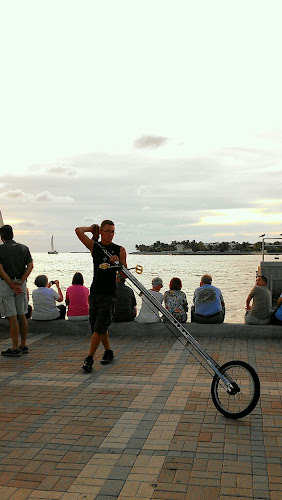 We are approaching that time of year when Key West turns its back on children and adults take up puerile behavior for themselves, so it is fitting that the sunset welcomes children. I have spoken with parents who like raising their children here because kids it seems can live out Tom Sawyer fantasies, wandering freely around town. Washing up at Mallory Square it seems. 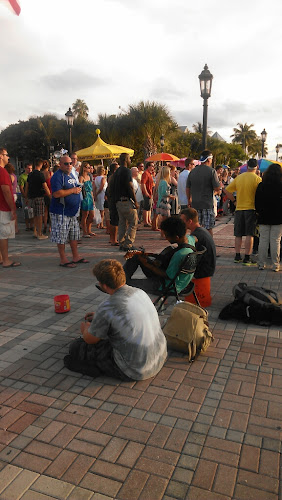 And adults pay attention to them. 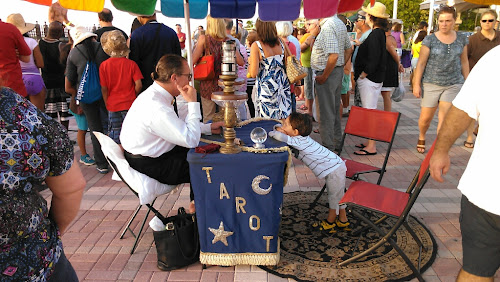 The world might be a better place were kids in charge you might think, as you watch an adult insert himself into ... a tennis racquet? 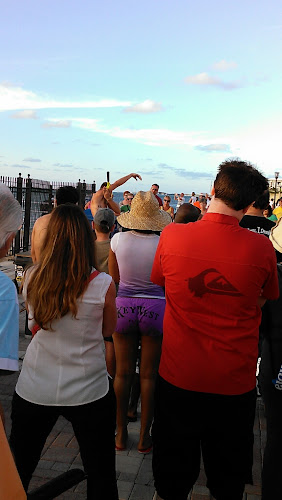 He was successful In his endeavor, which you might think is not a marketable skill but these exhibitors make a tidy living I am told in a town where the city is planning to build dormitories for city workers who, the mayor says, cannot afford to rent an apartment of their own on their wages. 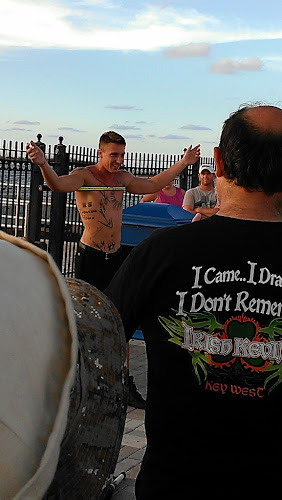 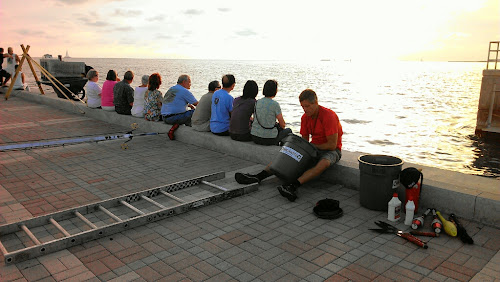 The sunset celebration is an organized non profit, assigning spaces, renting the square from the city. I overheard one participant complaining to another about an enterprising yet rather unkempt guitarist who showed up with his instrument, a chair and a rather off key singing voice. He was however viewed as letting the side down as he lacked shoes and a shirt and was apparently a stranger to clean running water and soap. 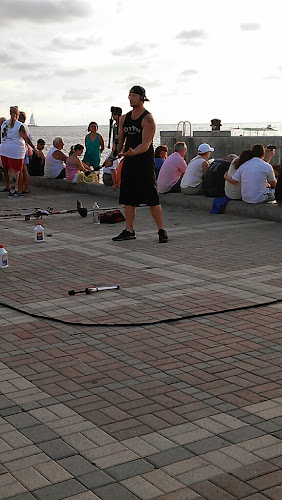 My goal was at the southern end of the square and I made a beeline as I am not terribly given to shopping and my life has all the dust catchers I need for ornamentation. The task was simple, buy some fritters, take a picture, eat the things and then bugger off to check out some juggling. 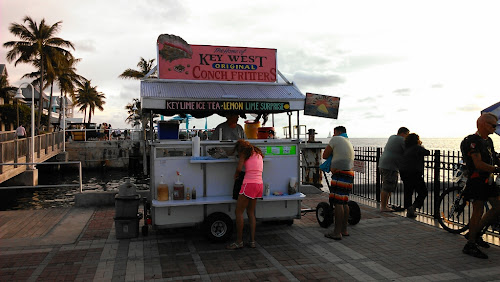 So far so good, I got six of them for seven dollars, added some ketchup and the man's home mixed mustard, and I ate them standing up. 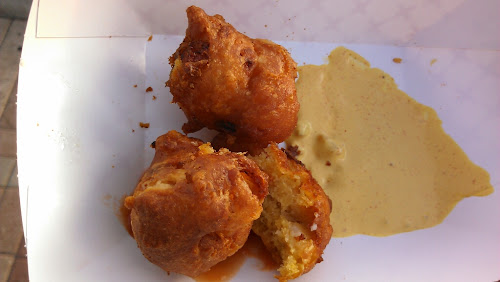 The mustard was stinging hot, the fritters were crispy outside and full of sweet ground corn inside as one expects. There were chunks of white rubbery mollusk of course. But here's the thing: A hush puppy even when upgraded with pieces of conch is not something you write home about. There are so many things I'd rather eat, that I find more desirable than deep fried corn... Frankly I am no great connoisseur of conch and when I lived in California, abalone that Pacific delicacy that also comes in its own shell, much adored by west coast gourmands, left me cold. Conch salad, a mixture of cold raw conch strips marinated in citrus might as well be tripe for all the joy it gives me. Cracked conch, a deep fried steak of the stuff coated in breadcrumbs depends on the batter for its flavor. So conch fritters, more economical in their use of the precious imported meat are the fall back position for those as want to claim aquaintance with Key West's legendary culinary and sporting symbol. But these are worth the taste and I'd eat them again, nicely crisp, piping hot with real pieces of large conch and a spicy mustard to dip, they are a worthwhile taste. 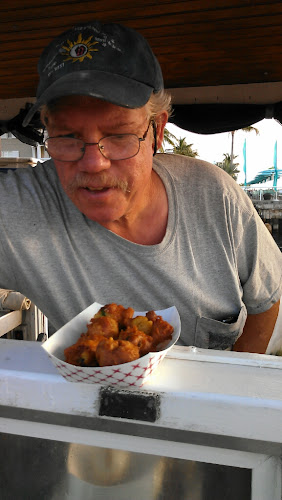 Naturally the story doesn't end there. Like Mr Bean on his elaborate lunch break I managed to find myself doing three things at once and made a hash of them all... 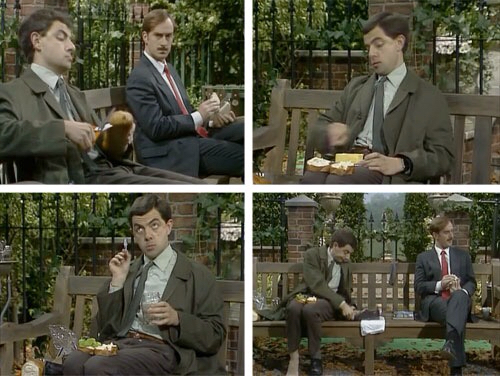 The sun was certainly heading for the horizon so while I balanced my fritters in their mustard sauce I pointed my camera hither and yon... 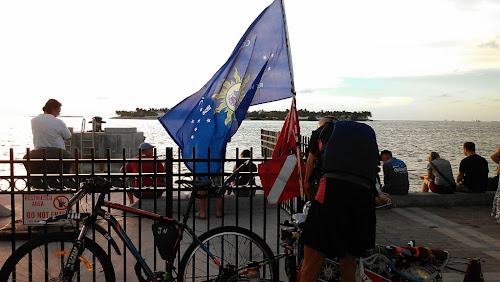 ...at people also working to catch the moment... 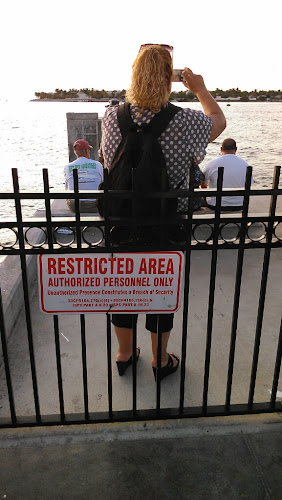 ...which could have been more spectacular considering the anticipation it's descent had engendered. 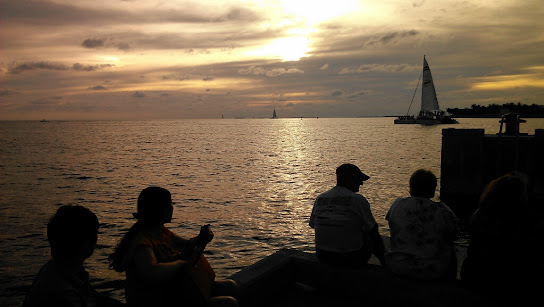 Will Soto the original sunset celebrator still juggling after all these years: 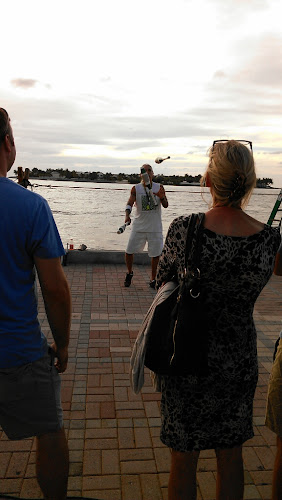 Which was about the time my fritters attacked and found me completely unprepared. It was a sneaky thing but the mustard slipped out of the end of the cardboard tray while I pointed the lense. The first I knew of my loss of control was when I found I had yellow goop on my fingertips which led to the discovery of a puddle of gruel down my front. I'm not saying its certain but I am pretty sure my mood took a dive when I saw baby shit down my front. I took a paper towel, and then another, then my tide stick which travels in my man purse with me as I have a tendency in this direction when I get distracted. I thought I did a pretty decent job by the time I was done. 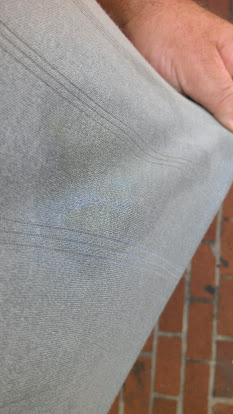 Anyway walking around with evidence of an unfortunate scatological accident on my shirt was a buzz kill. I abandoned the celebrants and rode home to Cheyenne who was alone to greet me as my wife is away wasting taxpayer dollars at a teacher conference. My dog promised not to give me grief if I took her for a walk immediately. Who was I to disagree with an urgent Labrador request. 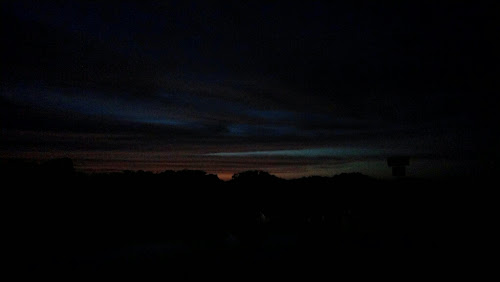 Much less stressful, in the dark with no vendors, no crowds and no conch fritters. I am growing fonder of them the further I am from them. I might have to go back and get a second impression. Next time hold the mustard.
Posted by Conchscooter at 12:00 AM No comments: