Start with a Maine Potato Doughnut. That was weird enough for me, driving back to La Quinta after walking Portland with Cheyenne first thing in the morning. The Holy Donut - Portland ME. 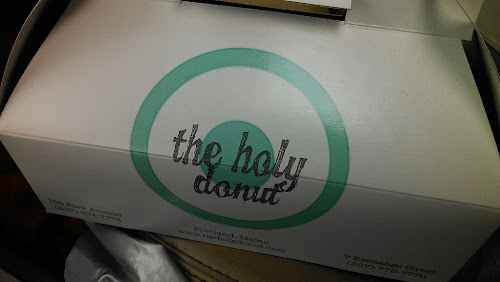 Saw the shop, screeched to a halt, which wasn't such a bad thing to do as Portland was empty at eight am on Independence Day. 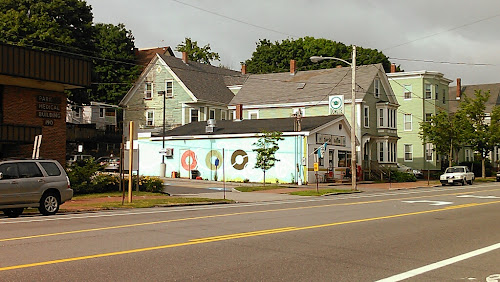 They weren't bad. The dough was thicker and more substantial than usual. I like sponge cake so that worked for me and the flavors (maple, pomegranate, cinnamon) ran through the entire doughnut. They looked normal! 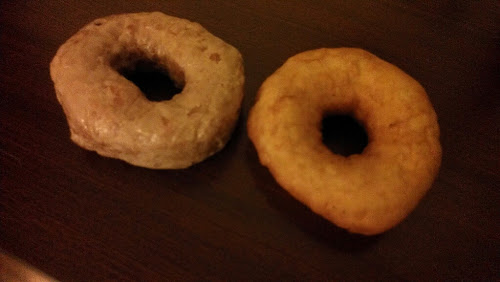 The plan was to go north. Man proposes, God disposes. We got to Brunswick and it's impressive churches and so it was that the skies darkened, night came early and raindrops started. 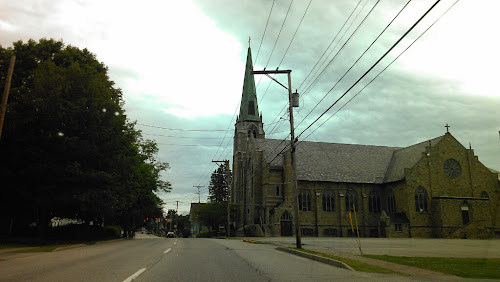 The plan also called for an early diversion south off Highway One to visit the Harpswell Peninsula and check out the famed Maine Coastline. I have been told that if you stretched out the few hundred miles of coastline and straightened out all the indentations Maine would have more oceanfront than Florida. Fair enough but you still wouldn't have the climate. Maine waterfront in July. 65 degrees, drizzle and with the tide far out, lots of gelatinous unphotogenic mud. 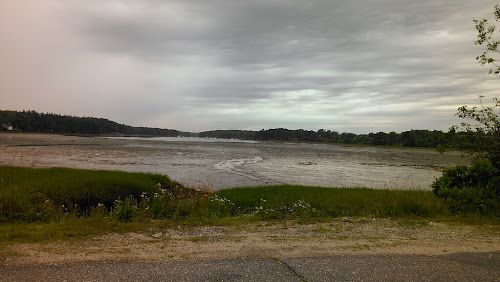 Call me a pantywaist but I like 90 degrees, bright primary colors in my water and my sky, I like sunshine and big puffy clouds. Palms? Sure. Mud? Not so much. But in Maine they love their gloopy muck at the waterline. 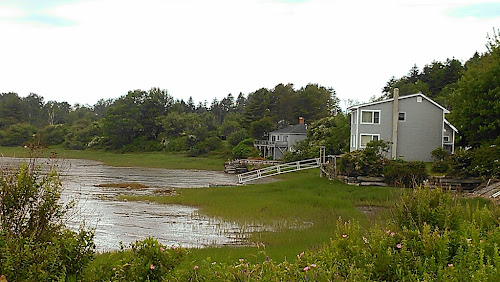 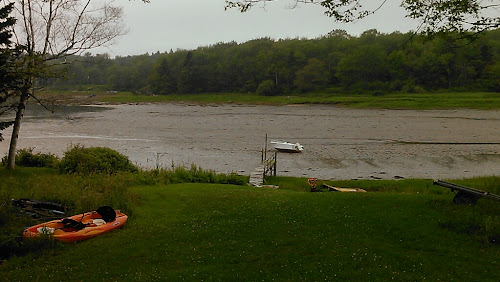 While my wife went shopping at a pottery studio buried in the woods I took Cheyenne for a walk in the rain. Of course it was in the rain, does it ever stop raining in Maine? Not content with all the mud in the ocean Cheyenne went looking for a drinking trough in the mud and was completely successful. She came back with two pairs of natty black stockings. This is getting to be the theme of this trip. 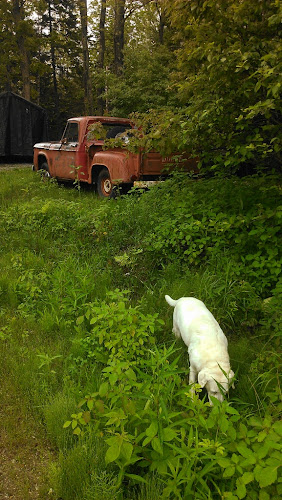 The potter sold my wife a delightful mug for which Layne had just the right use, plus she told us about the perfect fish chowder for sale just up the road. Cheyenne and I were seeking shelter along the road when the car arrived to wisk us off to lunch. 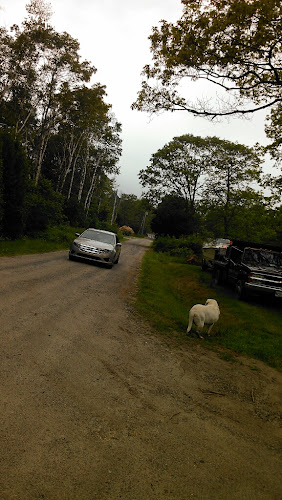 These back roads are not waterfront at all. We might as well have been driving through the woods of Western North California for all the waterfront we could enjoy from the road. 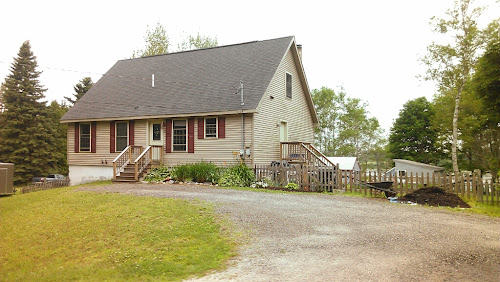 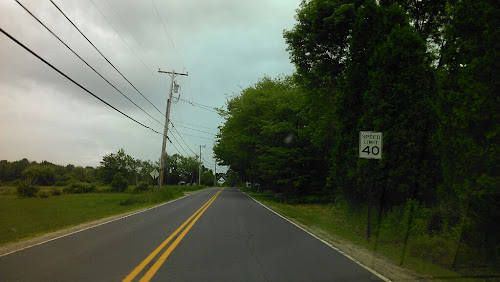 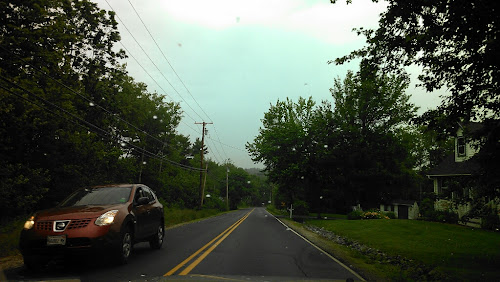 Finally we found the Dolphin Marina and Restaurant and were not the least taken aback to see the tide was far out still. 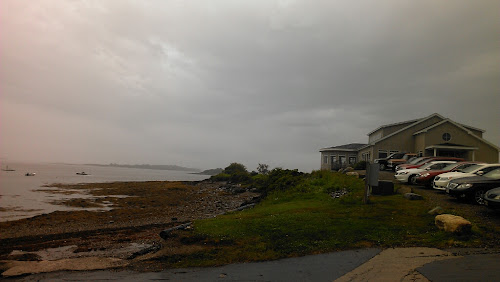 Fog? Got that, in spades. This is July in Maine, after all. 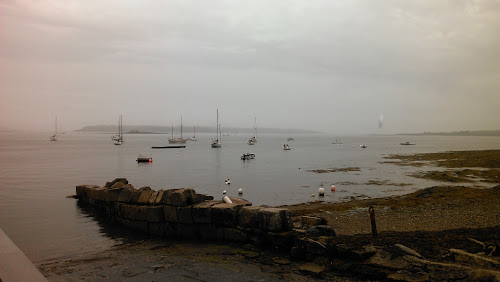 Cheyenne was in Labrador Heaven. Winter in July increased her energy and some outrageous new smells kept her very busy. They call this seaweed? What is this..? 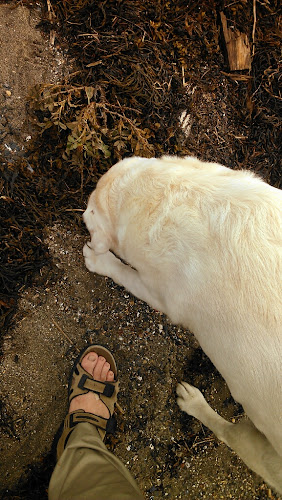 Don't get me wrong, there is beauty here and I wasn't cold in shirt sleeves but it sure is different. People came here to be by the water? What do they do? Swim and you get hypothermia; sail: ditto. Fish? In the fog? That's fun? Luckily it takes all kinds and if they weren't here they'd be clogging up Florida. They've got seaweed rotting on the beach here, just like the Keys: 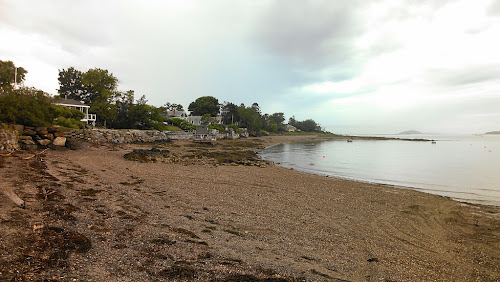 Some burly Maine dude parked his four wheel drive next to our car, took one look at our tag and said: "You brought the Florida weather with you..!" Winter weather I said, "I love it!" He said, laughing deeply and shrugging the rain off his shirt and his beard. 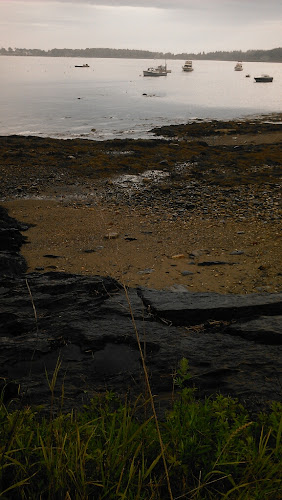 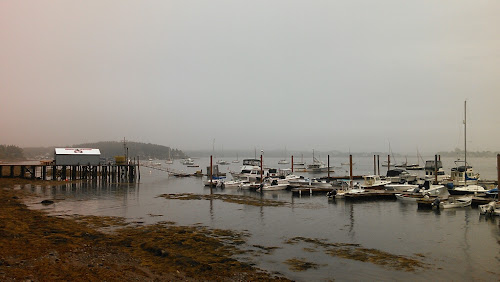 The fish chowder was excellent with lots of fish, enough potatoes and a creamy broth that wasn't goopy. I liked it a lot at Dolphin Marina & Restaurant. Notice how in their advertising the sun is always shining. Whatever. 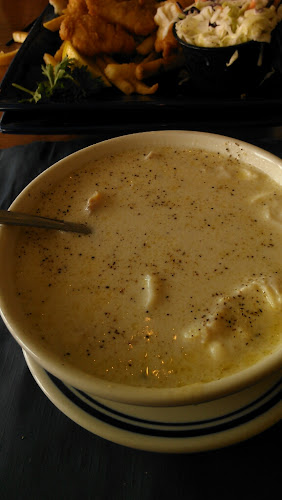 My wife was intrigued by the fish special, haddock so she ordered that to share with the chowder. I'd have had just the chowder but we ended up with what was essentially fish and chips, with no sign of anything Cajun which was supposed to be the flavor of the day. The batter was good, if not Cajun, the fish was flaky and the fries were average while the coleslaw was excellent and crispy fresh. All of it did not measure up to the delicious chowder, which let's remember was what the potter had recommended and it's what we associate with Maine in Winter/Summer. 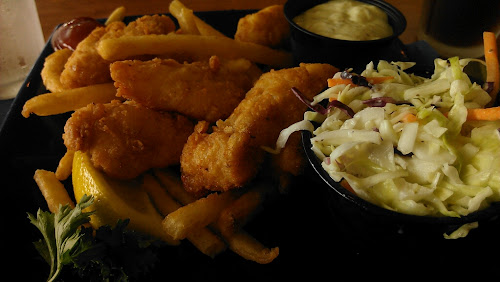 But I'm nitpicking, I loved the sturdy real glass that my tea came in, my wife had a delicious organic sangria. Service was excellent and the views were full of fog across the sound. I'd go back. Preferably on a sunny day. They have those in Maine don't they? Not yesterday. 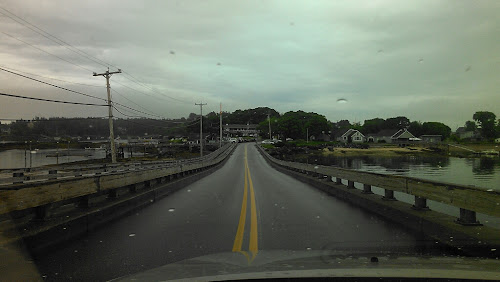 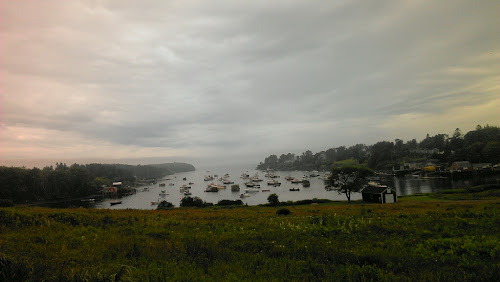 We got back on the highway and hit the city of Bath, named for the town in England near where I went yo school. There are, as far as I know, no Roman Baths here, but it was a pretty town with an impressive City Hall at the top of the hill. 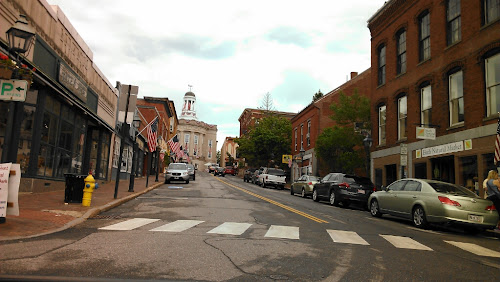 Okay. That's it. Our coastal tour just got washed out. Call us wimps but it just got to be too much. Every time we got out of the car there was water falling from the sky, water underfoot, mud, and a cowering Labrador who hates the rain. Did you know Henry Wadsworth-Longfellow lived in Portland, and wrote some of his poetry there? Yup, except unlike Key West's Hemingway House you can't take pictures inside. Which is a pity because the poet's sister preserved the house as he lived in it and it's filled with furniture his family actually used. And because it's in Maine there are no slave quarters here. Nice. 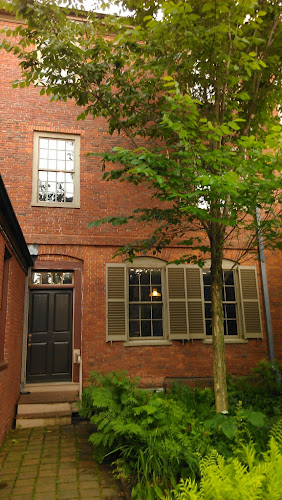 Check it out, Highway One nothing like the Overseas Highway we know... 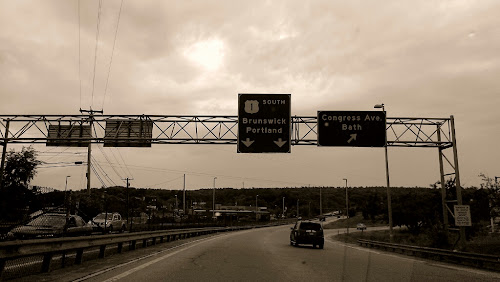 ...and love! (Even under construction). 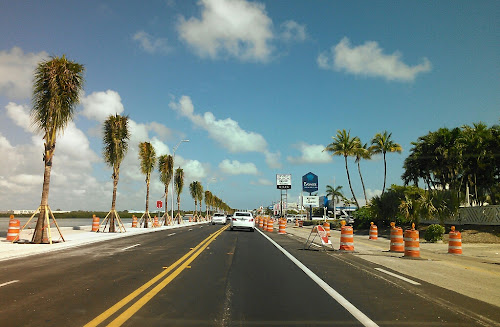 It's a great vacation, lots of adventures and exploration to come, abroad too I hope. But there' s no place like home. 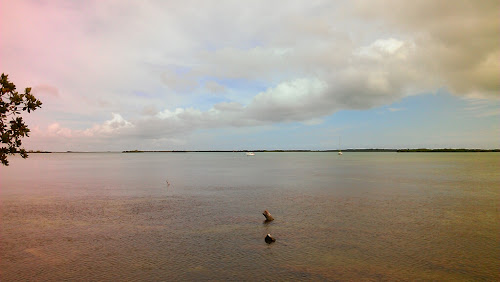