Eric called me from the road and said there was a problem. Oh dear I thought, the scooter has blown up. Never mind, I bought it pretty damned cheap with a credit card, no huge loss as I haven't even seen it yet! Eric had found it on Cycletrader offered by a  BMW dealer in Houston who clearly had no desire to hold on to this stupid scooter with only 400 miles on the clock... so Eric said he would fly from Virginia to Texas and ride it from Texas 1400 miles to my home...and now there was a problem on the road. "A man at a gas station pulled a knife on me," he said. 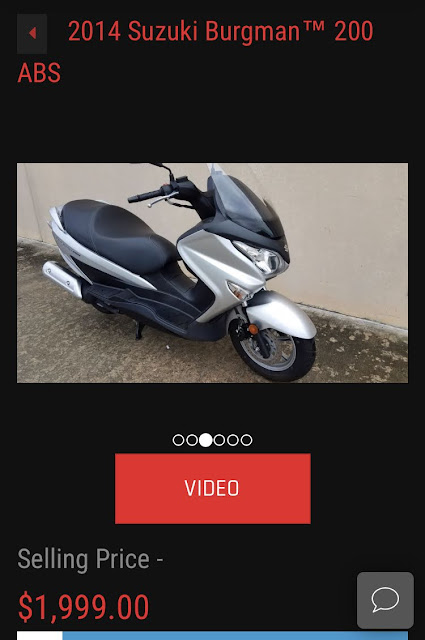 That was a bit over the top dramatic for me. The day before Eric's biggest problem had been riding out of the dealership in a rainstorm that blew up minutes after he got the bike from the salesman (below, road pictures by Eric the Virginian). He got rained on along much of the trip to Florida but he did avoid the big freeze that hit a week later and dropped temperatures from 65 to 35  degrees. So there was that. 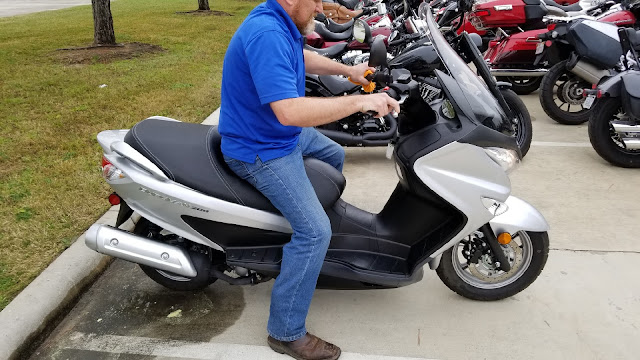 And as he rode Eric sent me pictures of his various stops along the Interstate. His encounter with the would-be robber ended well as Eric, six feet tall and fully armored in his riding gear convinced the robber to back off and Eric rode away in one piece. That encounter could have gone much worse and its after effect was to give me anxiety about what else could have gone wrong that week. I don't think I will do this sort of third party thing again. If I can't ride it I won't buy it. I'm not risking someone else for my passion. 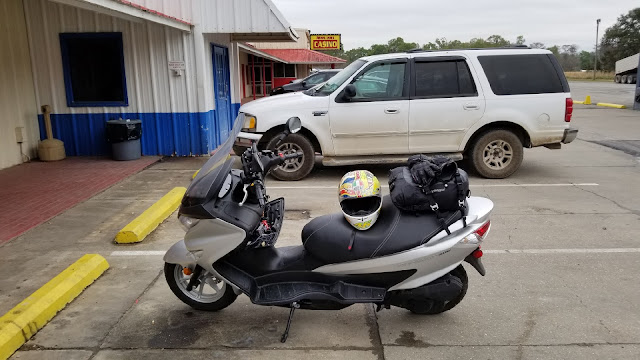 However there is no doubt Eric's enthusiasm for the purchase and his volunteering to use his own airline miles to make the round trip has been a huge morale boost for my crippled self and even if I can't ride for a few more weeks the Burgman 200 is here, under the house and ready to go. Just like the one that got wrecked last August. 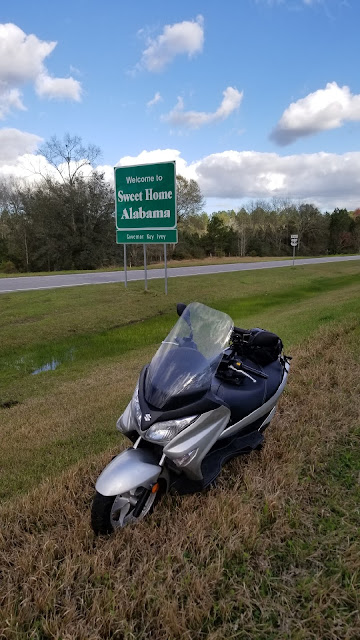 The funny thing about this whole mad exercise is that I am now well known in scooter circles as the guy who likes the little appreciated Suzuki Burgman 200. In a country that reveres size over all things and Harley Davidsons are the stodgy mainstay of the riders who go with the fashionable pack, a modest little scooter seems an eccentric choice of ride. Indeed scooters are so under appreciated the community of riders across this country is only a  handful of enthusiasts compared to the legions of identically attired riders of "American Iron." So when Eric noticed this grossly undervalued Suzuki he knew who would in North America would appreciate it: Me! 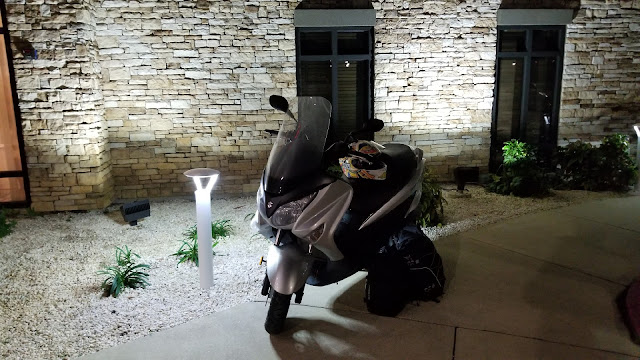 He made it of course after meeting up with some other scooterists in Central Florida, and finally finding sun and heat. After we had greeted each other, and it had been half a year since we last met up at his place in Spotsylvania, we talked about the little scooter that could. Eric too has been converted by riding the 200. He said it handled his size admirably and easily kept up with freeway traffic above 70 mph without having to go flat out. At speeds under 45 mph he was getting 90 miles to the gallon while the weather protection served him as well as it does me and I'm half a foot shorter than him. 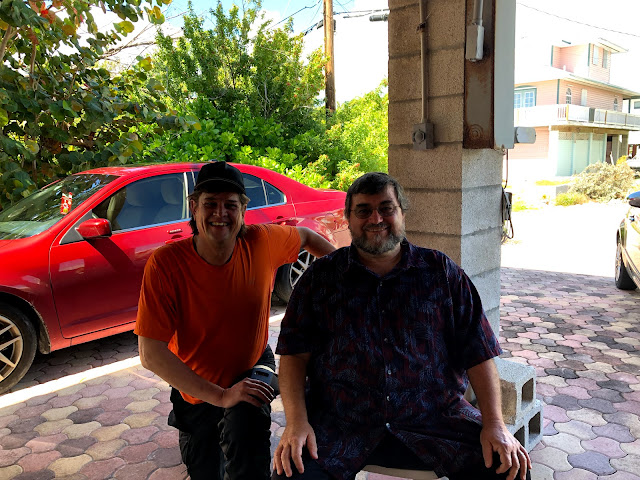 I was delighted to see my scooter at home now with just 2,000 miles on the clock and still brand new. Good job Eric! 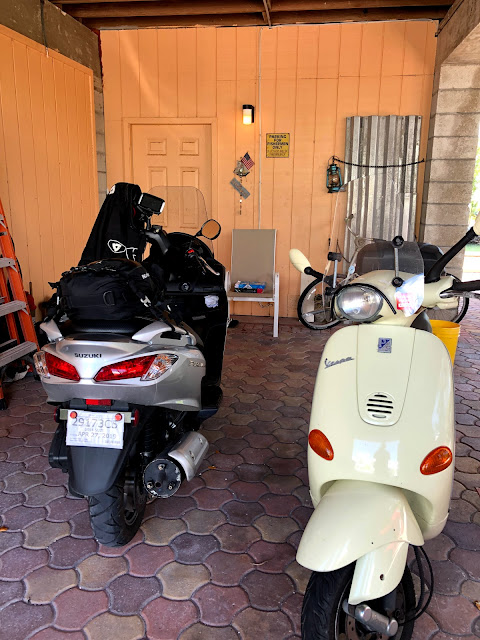 With a weekend ahead of us, before his Monday flight home to Virginia, it was time to show Eric the Keys, a place not known to him. And luckily I was off work, so I had the time to be a guide. We sketched out a few plans lounging on the deck at my house. 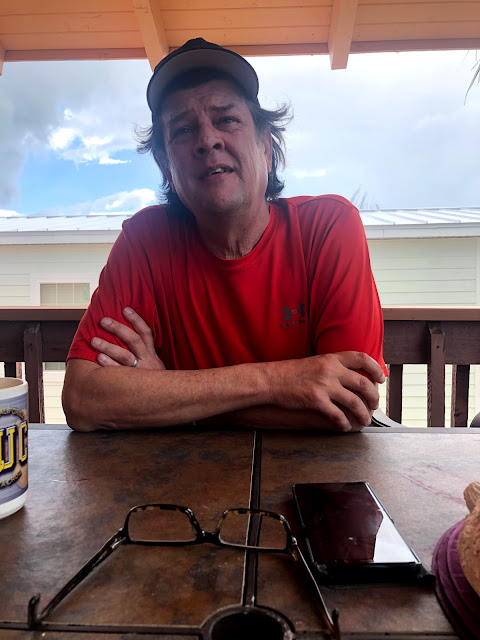 As it was snowing in Virginia - ha ha!- we first went to the beach. For a while Eric tried to convince me I should enjoy seasons as he does each year. Chopping wood, sitting by the fireplace etc etc...But I know myself and I like summer heat and Virginia in summer is lovely for about three months. The Keys are lovely year round if you don't mind the heat and can afford air conditioning. 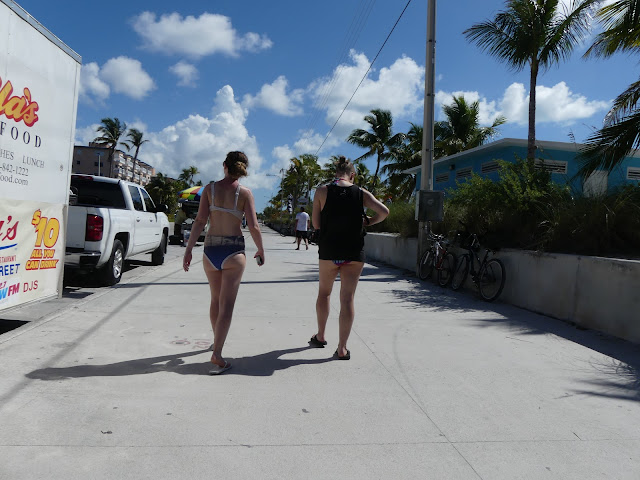 This picture below I took for him to send to those wishing it were summer: 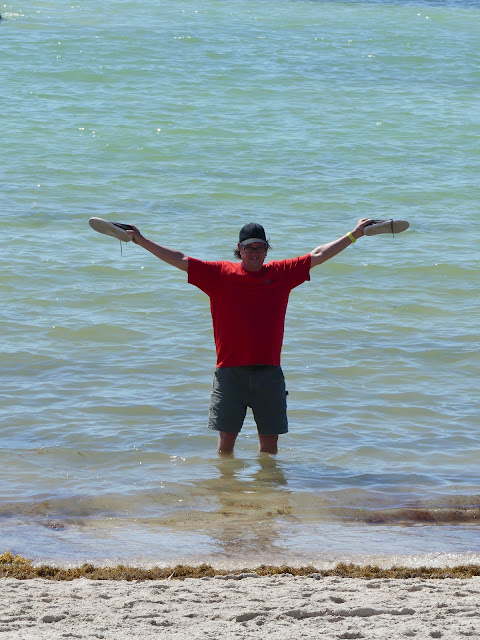 Smathers Beach was looking perfect for a snow refugee: 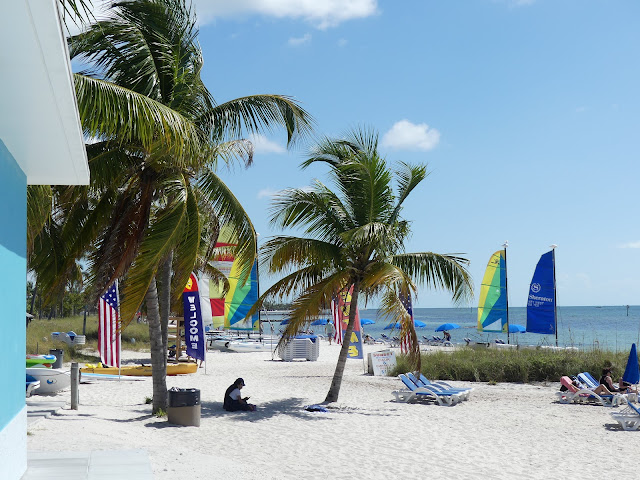 "Yes," Eric muttered. "I could live here" and he probably could as his work is portable but I'm not at all sure the off beat aspects of life in the Keys quite struck home. I did try to explain to him how that works but he had a dreamy look in his eye and a beer in his hand. Who among us has not at some point dreamed of settling down in a place we went on vacation? 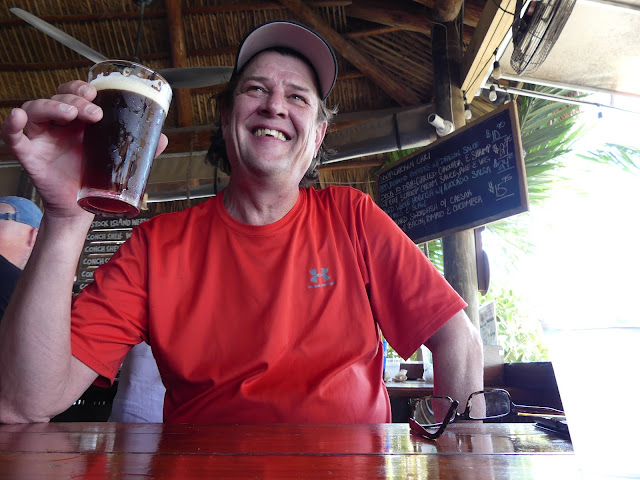 Hogfish I thought expressed the Keys state of mind nicely but Eric worried his shrimp might be frozen. I pointed over my shoulder at the shrimp boats in Safe Harbor fifty yards away but he was unconvinced until he finally tasted them and pronounced them the best shrimp he'd ever had. They were very good of course: 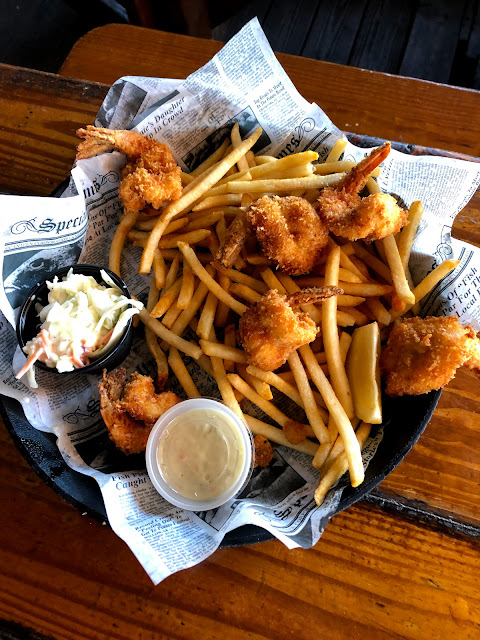 I chose the hogfish (also not frozen of course!), a sandwich eccentrically served with melted cheese and mushrooms in some peculiar form of surf and turf lunch. 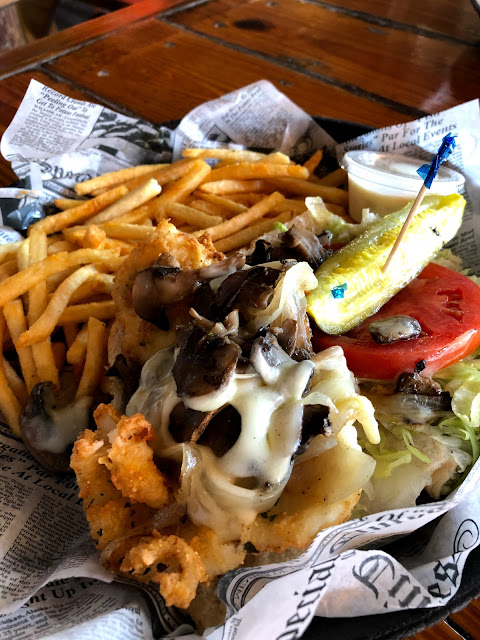 Naturally the reef Conch Cruiser was sitting outside all ready to blow Eric's brains and his camera lense. Clearly he was no longer in Kansas -  or rather Virginia. 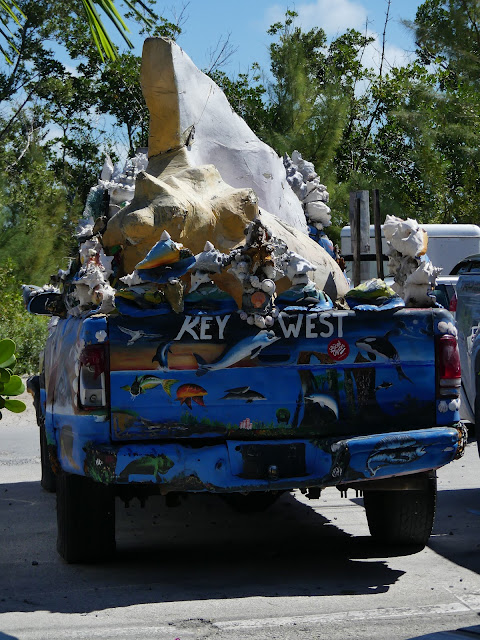 Eric likes to use his Vespa 946 scooter to check out historic sites around his state which has plenty of such attractions. It seemed to me the Key West Cemetery might be of interest and I showed him the plot dedicated to the sailors blown up in the USS Maine. He spent a  fair bit of time checking it out: 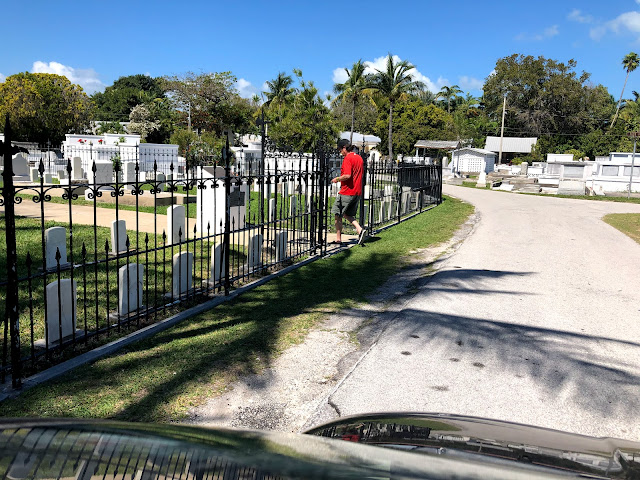 Eric is a community oriented dude and has been working on plans in his hometown to build a scholarship program for needy youngsters so I knew exactly who he had to talk to. We arranged to meet at Cuban Coffee Queen downtown. 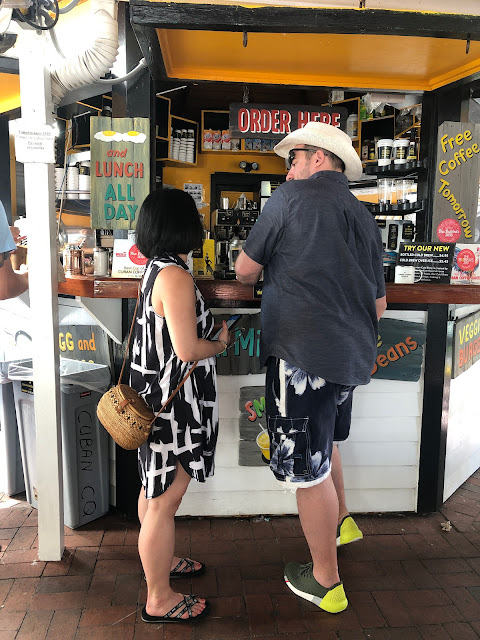 Chuck manages a very successful scholarship program in Monroe County so the two of them got chatting away. Wayne and I caught up on the daily details of life... 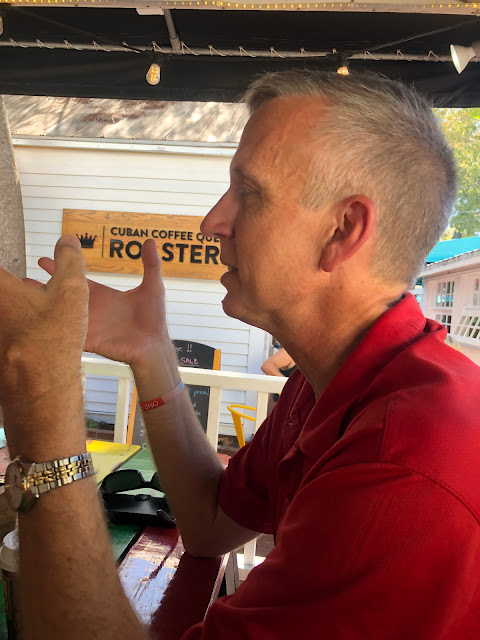 ...and I wielded my iPhone to record the moment when I was surrounded by men in red shirts. 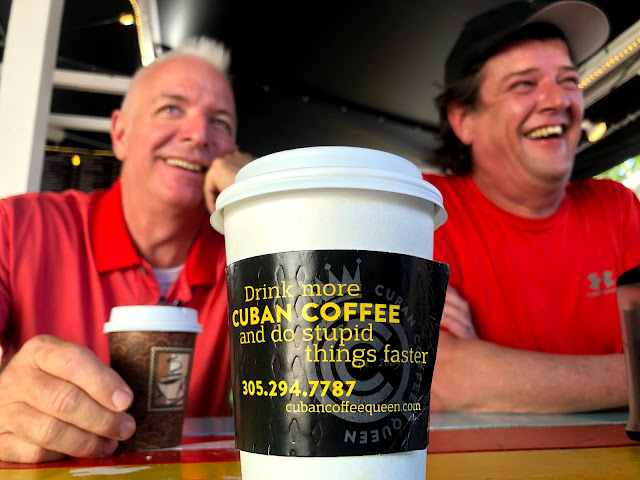 At home Eric pondered life and his work load while I took a nap with my dog who never misses a walk even when I have guests. 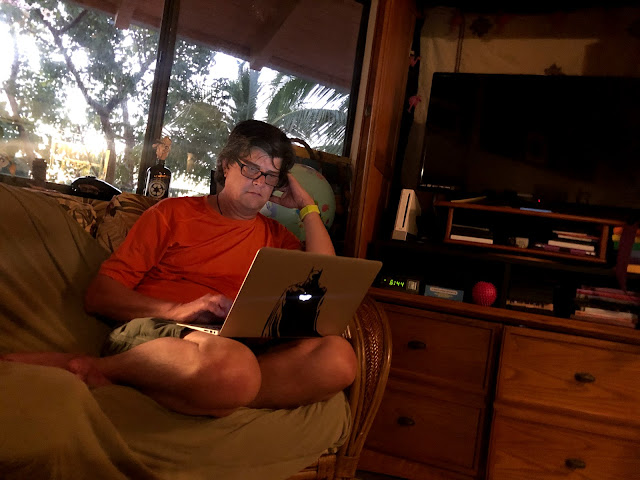 I don't think Eric, as much as he missed his wife and dogs missed the  snow at that moment: 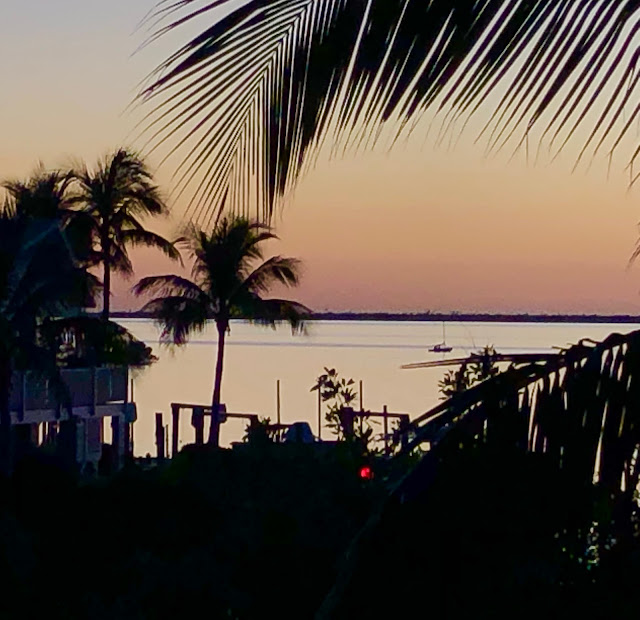 And the scooter really was secure downstairs, and not a figment of my imagination.
Posted by Conchscooter at 2:00 AM 6 comments: