I was offered a couple of hours to myself, a Gate brand gas station near the hotel was listed as selling ethanol-free gas so I was set. I had to see just how this my third attempt at owning a Vespa was going to work. 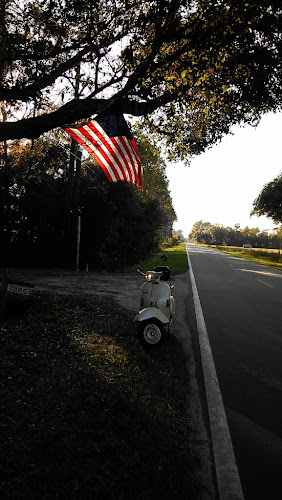 I put two and a half ounces of oil in first, then I loaded one and a half gallons of gas (which came to $5:41) and added a further one and a quarter ounces of oil for the half gallon of gas. My theory is to put oil in first to get the stuff mixed, then make up the rest at the end. The oil in the gas lubricates the engine do it is critical to get it right. Most Vespas like mine have a separate oil pump to feed oil to the engine but I wanted the simplest model I could find...and I got it. 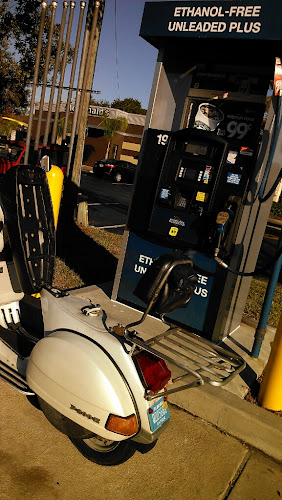 I took County Road 208 west toward the St John's River, and it was a good choice with very little traffic, and speed limits far beyond my break-in speed. Once run in this little engine will eat 55mph for lunch. 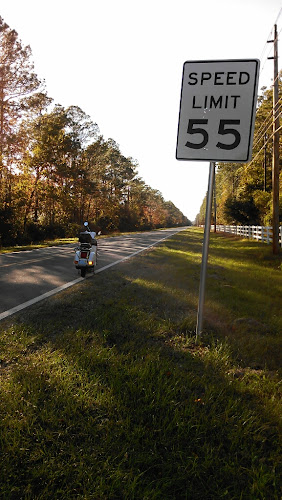 The old fashioned engine is supposed to be used lightly at lower speeds, no higher than 35 to start, always varying the speed and increasing gradually after hundreds of miles. B-o-r-I-n-g. But necessary. 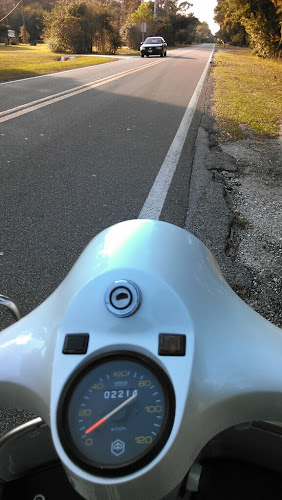 Commuting on Highway One will be a trial at these speeds but slowly slowly I will get this thing run in and done. Then we'll see how the cages get out of my antique's way! 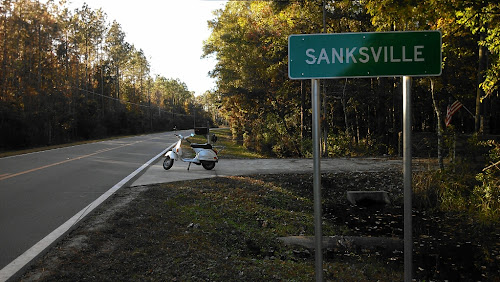 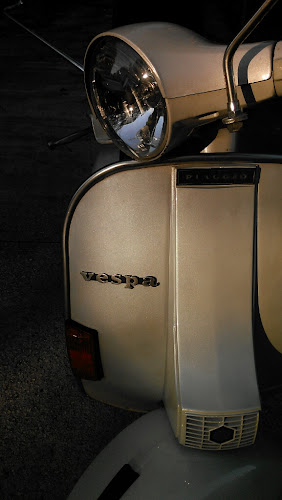 There is no ignition key yet as the proper ignition switch failed to arrive from Italy and Gene the restorer won't substitute Indian-built bits. Mind you there is no battery here and the bike runs directly off the magneto, so a fake key is no big deal. Twist the slot and press the kick starter and this thing putters obediently to life. When the zombies take over the world this little tank will carry me to freedom when more sophisticated machines run out of electrons. 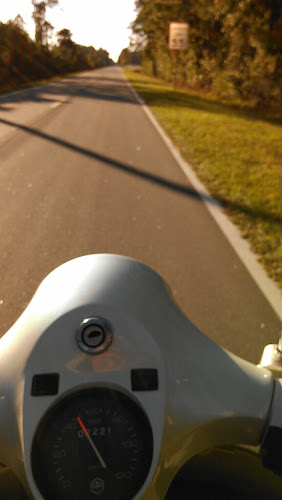 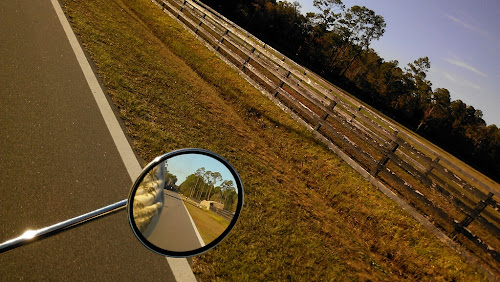 Just because I was rattling along at 35 didn't mean I couldn't wriggle around in the bench seat and play with my camera... I was alone with my Vespa, with a cooling setting sun and lots of lovely light. 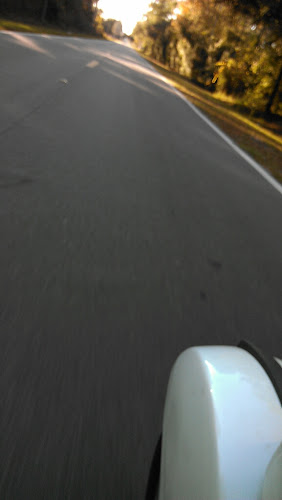 I was put in mind of Scooter in the Sticks where Steve says he is inspired to stop and make pictures by his slow speed meanderings and the ease of use of the Vespa. And mine is even lighter and easier to park than his modern heavyweight. 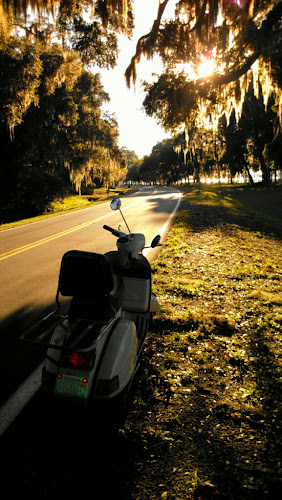 230 pounds complete with spare wheel ready to go, twelve horsepower two stroke single cylinder engine, four speed gearbox, theoretical top speed of 63mph (100kph) and a possible 60 miles per gallon. The ideal commuter with little maintenance and a long heritage as a tough daily rider in harsher conditions than those found in the Keys. 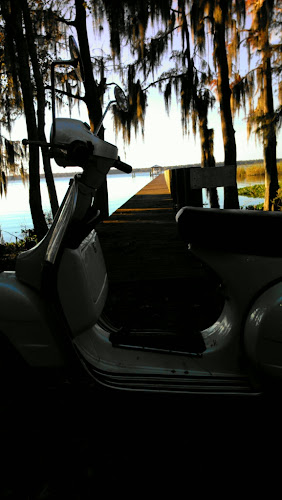 When this scooter first appeared in 1977 I was horrified at how square they made the lines. Nowadays the P series Vespa looks lovely and traditional to my eyesight, warped by the passage of time. 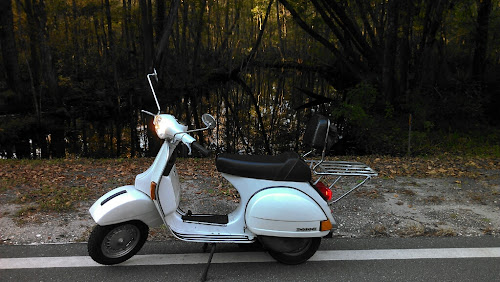 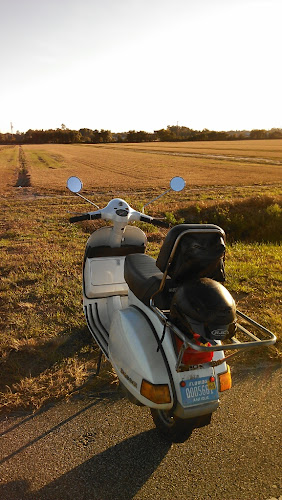 Traveling as slow as molasses look what I come across...BBQ to go...I pull a quick u-turn...easy to do on my ugly duckling and putter up to the front door. 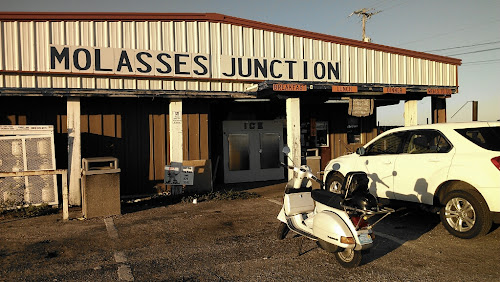 "You ride that thing everywhere?" asked the guy in the stripey top. "Not yet," I said, "but I want to." $14 later I had half a rack of ribs dangling from the seat hook. 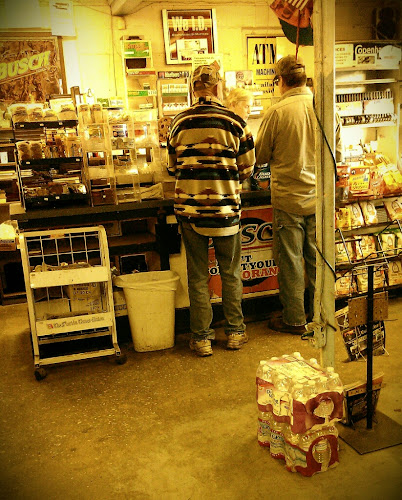 Well, I had to have a quick taste. Delicious. This minor episode put me in mind of a chapter in T E Lawrence's collection of stories called The Mint, including a tremendously evocative description of riding at speed. Absurd I know as I tottered around trying to keep my Italian stallion under 40mph, but Lawrence described picking up bacon and eggs as he traveled and here I was with my bag of ribs. Ha! This bodes well. 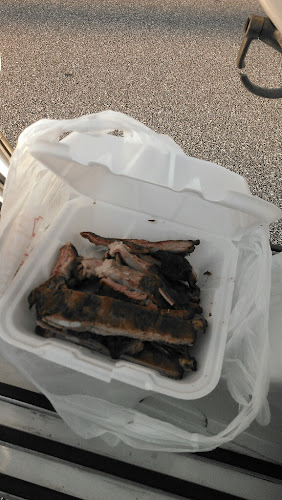 I traveled about thirty miles in a circle through farming country west of I-95 and I was glad to get back to the hotel temperatures were dropping with the sun and I was ready. The scooter promises a good ride. Vibrations smoothed out significantly the closer I got to 40mph and I pulled out my phone GPS to calibrate the surprisingly accurate kilometer speedometer. The riding position is nerdily vertical and puts a lot of stress on the left wrist when pulling in the clutch and shifting the four speed gearbox on the handlebar shifter. Changing up is relatively smooth but I will need to work on downshifts which are notchy and finding neutral needs to happen before coming to a stop. Practice and breaking in will make this smoother. 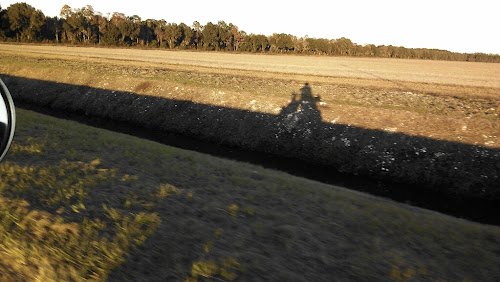 It takes but a hair of accelerator to keep the scooter rolling at an indicated 60kmh which on the GPS is 36 mph, and it's easy to see how peppy this engine will be once the break-in is completed. This is not a modern scooter built for people who drive vars and expect smooth electronics and information screens. The Vespa is delightfully crude and seems go progress with a certain masculine certainty. I enjoyed the ride a lot, even though I like speed. 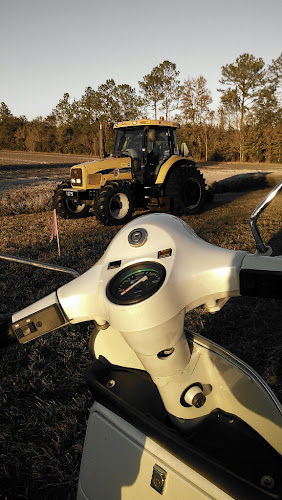 I got the P200 because it is significantly faster than the 150 or 125 models. I also wanted factory stock for maximum reliability. I am looking forward to traveling and seeing and photographing things with this scooter. 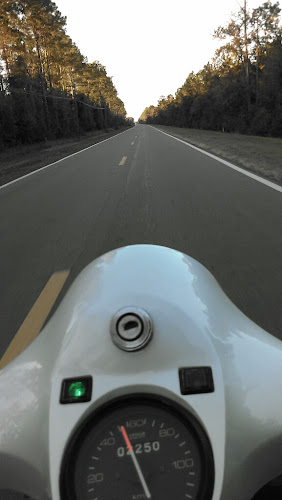 It is not a substitute for my Bonneville which I love as a completely different ride, but I do like the relative complexity of mixing fuel, managing the shifter and actively using a 35 year old scooter. 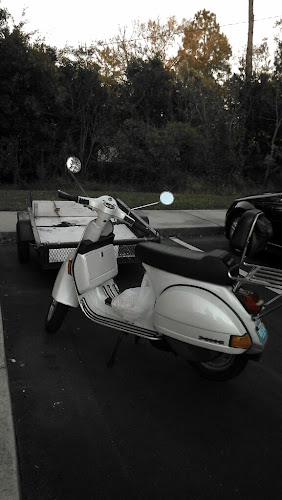 So far so good. Gene at Scooters Originali in Allentown Pennsylvania did me proud.

Further reading:
Features of the P200
Why I Like this Vintage Tourer
La Vida Vespa
Stergios Gogos (use the Google translation button on the page and it works quite well).