The Blue Ridge Parkway is probably best known as a North Carolina phenomenon, but the road actually starts, or ends, in the Shenandoah Valley of Virginia.

A chunk of it runs close by Roanoke and I took the time to show it to Cheyenne my Labrador sidekick.

I needn't have bothered as she was so exhausted by sightseeing she declined to get out of the car.

I enjoyed looking out across the rolling hills and deep gorges.

At the farms far below.

The road has a 45 mile per hour speed limit but access is free and easy at numerous intersections and commercial traffic is banned from this elongated National Park.

It is quite lovely and well worth the drive, even in Virginia!

- Posted using BlogPress from my iPad
Posted by Conchscooter at 6:00 PM No comments: Links to this post

I first published this essay in March 2008 and I have re-posted it today following publication of today's Key west Citizen advising the Secret garden has in fact been sold to cover the owner's various obligations and will close this afternoon forever. 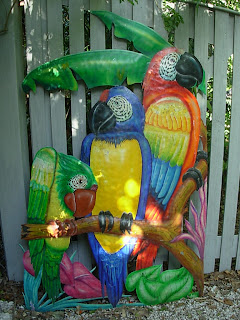 Key West is not a town one can keep a secret in very easily, and by now I would venture a guess that just about everyone and her brother knows there's a profusion of greenery open to public inspection in the very heart of the city. 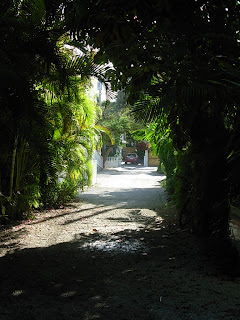 Free School Lane is not such a weird a name for an alley in a city that boasts innumerable little paths and tracks all over town, Nassau, Love, Gruntbone, Poorhouse, to name but a few. Free School Lane has housed this acre of greenery for several decades, alone among lanes and alleys. 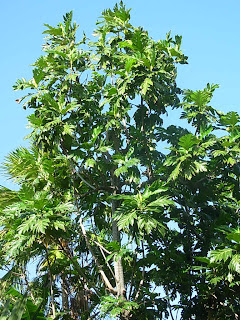 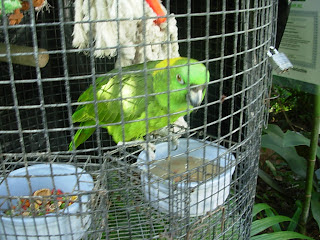 Plants have been growing, the collection of parrots is extremely loud in their cages, and they are to be moved to 518 Elizabeth street for continued public viewing, while in the old garden the sunlight is still quite dappled on the huge tree trunks and the enormous dinner plates of green leaves for as long as the garden remians undeveloped. 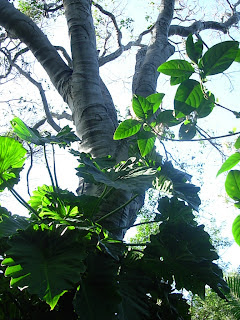 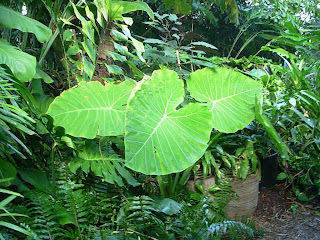 Free School Lane lies off Simonton Street, the artery that parallels infamous Duval Street. There are fewer shops on Simonton, and there is more shade. Fewer traffic lights than Duval and much less traffic making it easier to get from Simonton beach to the north to United street to the south if one needs to get across old town in a hurry. 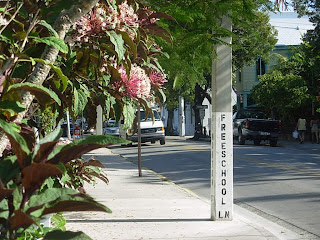 Free School Lane is marked on the cement street light post, halfway between Southard and Fleming Streets, which are in turn the major old town arteries leading onto and off Duval Street. 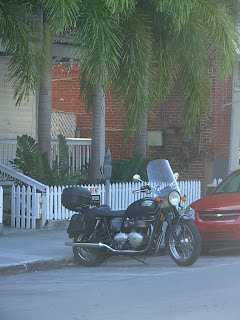 And there is ample parking...designated for motorcycles and scooters. 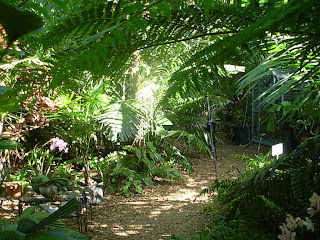 The Secret Garden was a desirable commodity a refreshment tucked away and available for those that want to stay within walking distance of the bars of Duval, Key West's other refreshment. 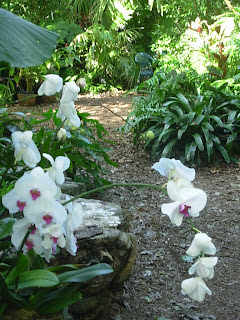 What strikes me about places like this is, aside from the care lavished on the plants that I, a failed botanist with a memory like a sieve, could not hope to name, is how much I value these small corners of extravagant exuberance. 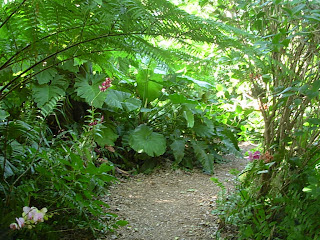 Living in the Keys I take no space for granted, I cannot allow myself to overlook any object of interest.Not only is there too little land to do that, everything in a market as overpriced as this, is by its very nature transient. 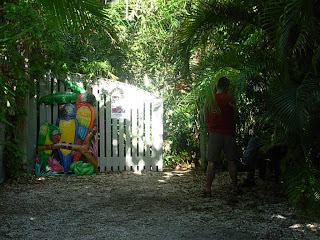 A guesthouse next door to the garden, a modest white wood home was for sale in the paper for one point three million dollars on my visit to the garden in March of 2008, when I originally published this essay. Now the garden itself will be gone in a few short hours, closed to the public awaiting it's fate. 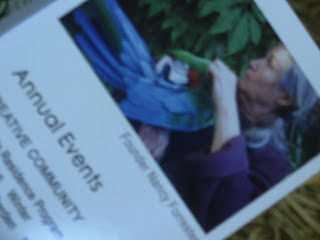 Each visit was, in addition to refreshment, a small statement of defiance against the forces of change, of "improvement," of destruction in the name of maximum return on investment. 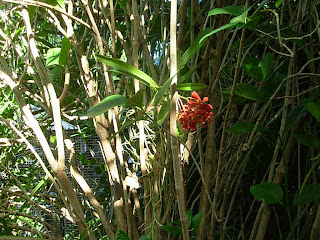 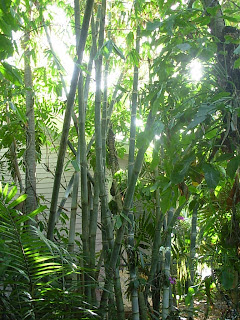 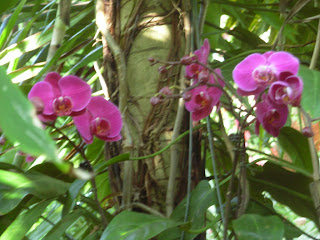 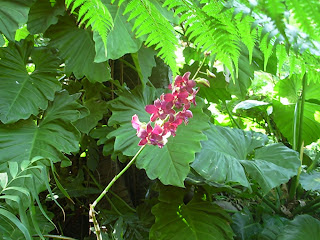 $10, charged on the rather old fashioned "honor system" seemed a small price to pay to wander in peace for a while.
Posted by Conchscooter at 12:01 PM 4 comments: Links to this post

Cheyenne and I had a week off on a little road trip to the Old Dominion at a time that somehow did not seem auspicious for fair-weather junkies like the Labrador and I.

Rain, wind and temperatures in the fifties, under darkening afternoon skies put us a long way from home on Interstate 81, the highway that truckers love to pound to and from the industrial suburbs of Pennsylvania, just north of the Mason Dixon line.

But we were bound for the Star City, the industrial town that built a metal contraption on a mountain overlooking the Roanoke River Valley.

A hundred thousand people live in Roanoke including a blogging friend who invited me to see what the mountains of Southwest Virginia have to offer a lover of sun sea and tropical moisture.

Cheyenne was mightily impressed by the winter-like weather and her appalling skin allergies immediately started to lose their grip on her skin and her eternal incessant scratching. The views from Mill Mountain under the Worlds Largest Metal Star were somewhat...limited.

The star reminds me of the statue of Vulcan built on a hill to look out over the foundry town of Birmingham, Alabama which in many respects resembles Roanoke, with it's industrialist history, brick buildings and slightly seedy downtown. Not visible on a foggy day any of it.

The city is dominated by the golden roof of the tallest skyscraper proudly boasting the name of Wells Fargo bank, the publicly sustained subsidiary of Goldman Sachs and the Evil Empire, so I felt no need to take a picture of that monstrosity for the record. Instead I took Cheyenne walking in the leafy suburbs of southwest Roanoke, the genteel neighborhood where I was staying with friends.

The sun put in an appearance, as did early morning frost, and we strolled on proper sidewalks bounded by thick grass with the early efforts of spring straining overhead.

For a city four times the population of Key West it was very quiet and peaceful and amazingly pastoral. It was even equipped with it's own lighthouse:

I spotted the seemingly inevitable pirate Jolly Roger flapping under a Beech? Elm? Something? tree which was doing double duty as a tree house and pirate ship when the diminutive swashbucklers were home.

The locals were keen to tell me winter has been the mildest in
living memory - yay global warming! - and we saw highs in the mid eighties. One memorable afternoon it was hotter in Roanoke by seven degrees than it was in 79 degree Key West!

There were purple trees called I think, rather confusingly blue buttons or some such, in evidence everywhere.

This is colonial country, land of revolution and confederacy and deep seated traditions, exemplified by every third building that looks like it was built to accommodate the Continental Army, made of brick and subsequently painted:

Cheyenne and I know nothing of Roanoke or of Virginia so perhaps it's time we learned.

But before we take a few days to explore Appomattox and Monticello and the hippie town of Floyd and the coolest little town in America, in West Virginia of all places, a fat old Labrador needs a rest after a twenty hour drive in the car. Virginia's lush green lawns get her vote.

- Posted using BlogPress from my iPad
Posted by Conchscooter at 12:01 AM 6 comments: Links to this post