I have had enough of sports to last me well beyond the next four years. From imgur, the picture sharing site which is irreverent inexcusably vulgar and terribly funny this fine moment captured forever: 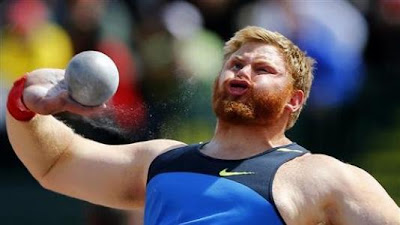 One has to respect the effort and energy expended in all these more or less non violent activities, but I will be so glad when we can put these sporting efforts behind us and get on with real life. One more week to go. 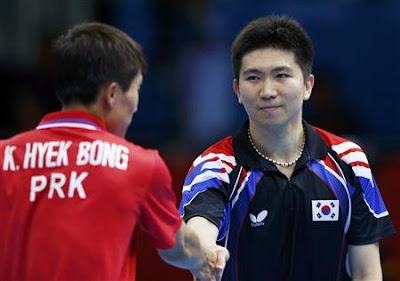 The Koreas shaking hands. The Olympics weren't totally wasted then. Cool.
Posted by Conchscooter at 9:00 PM No comments:

I overheard a tourist tell his girlfriend that Key West is the only place on the planet where drunkeness at eight in the morning is not only permitted it's encouraged! Cool.

The public face of alcoholism is an elderly man clutching a pink cab lest he fall flat on his face on Petronia Street. After I came out of the theater near midnight I saw a woman supporting a staggering man who collapsed against a wall next to me, where he pissed himself copiously through his shorts. "I'm not normally like this," he muttered. "Key West has that effect," I replied as I supported his other arm and tried to avoid the waterfall.

For those that look there is so much more to this little town. The San Carlos, property claimed by the Cuban Government as a former consulate is now an arts space on Duval Street.

Fast Bucks department store is gone and now it is being used for a while at least to showcase art work from various galleries. Worth a visit.

On tandem bicycles men ride at the front and women get to stare at their butts. It's a rule, I'm told.

Children must wear helmets but their parents feel no urge to lead by example even though the law exempts them. I am not impressed by modern parenting techniques.

Everyone dreams of making a living busking on the streets of Key West. A few pull it off:

Drunken bros shambling down Duval. What tropical vacation memories are made of.

St Paul's rises above the shambles

Looking good as the sun also sets over another night of tropical debauchery.
Sigh.

- Posted using BlogPress from my iPad
Posted by Conchscooter at 12:01 AM 1 comment: