I have been pondering how much I like my wife's Fiat 500 convertible and I guess the short answer is quite a lot. Enough that were I ever to be physically unable to ride a motorcycle I would choose to drive a Fiat 500 over say a CanAm 3-wheeled Spyder or some other not-quite-a-motorcycle solution to the problem of ageing. 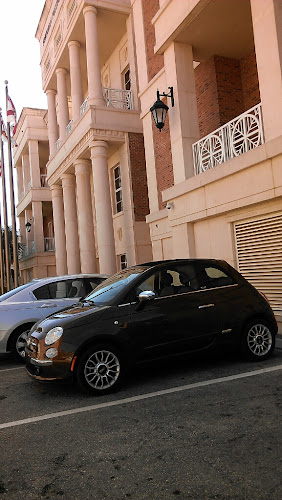 My wife is one of the few people I know who likes to commute with her roof open. She will convert her convertible in any weather short of actual precipitation, she loves going roof-less that much. Indeed I never cease to be amazed how many convertibles I see on the road in perfect weather with their roofs firmly closed and I wonder why anyone would go to the extra expense and bother of a convertible if they were not perpetually drawn to the cabriolet driving style. Perhaps they are just driving their spouse's car and are not attracted to the roof down style; and before the arrival of the 500 that was me because I like my car to be an air conditioned cave. 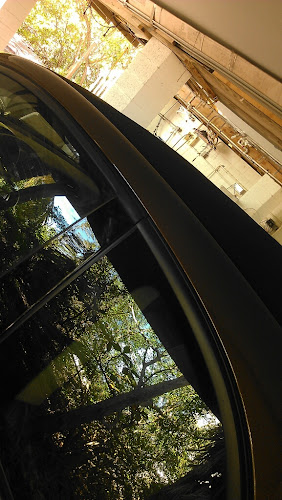 However in this car the business of opening or closing the roof can be done while underway at speeds up to sixty miles per hour and it all happens with the simple press of a button. To open press once and the roof goes most of the way open, press again and hold, then the roof goes flat, lowering the glass rear window in the process folding like neat origami on the back of the car. 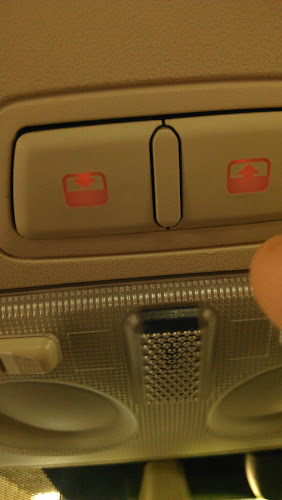 To close press the other button and the roof returns to sunroof mode, so then you hold the button and the roof closes completely. Dead simple, no latches, no stopping to open or close and no noise no muss and certainly no fuss. Lovely. Indeed with the side supports fixed in place the car does not squeak or flex and the side windows, the only ones that open are so large you can get all the fresh air and openness you need. With the roof in sunroof mode, ie: partially open, you do get some percussive helicoptering noise which will require you to open the windows a crack. With the roof fully open that hammering sound goes away but there is more turbulence in the cabin. The compromise of convertibles! 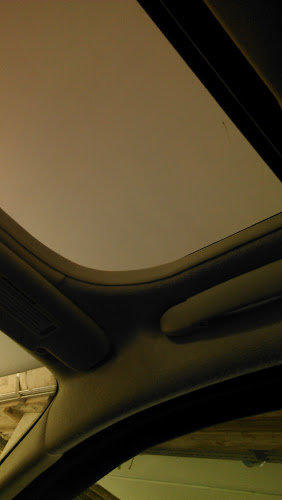 On the other hand I have to say this is the first convertible I have actually enjoyed as I am generally no great fan of open touring cars and I don't often use the sunroof on my Ford Fusion for that reason. The Fiat though is a convertible I have come to enjoy and I think the soft roof is definitely worth the money. In our case it was a no brainer, not only because my wife wanted a convertible to replace her aging Sebring convertible but because we found this 2012 at CarMax Tampa with 1130 miles at $16,500, almost ten thousand below brand new list price. There is another one listed now with heated leather seats and twenty thousand miles for $17,600 as though to prove my point. Here is the car with the roof fully open: 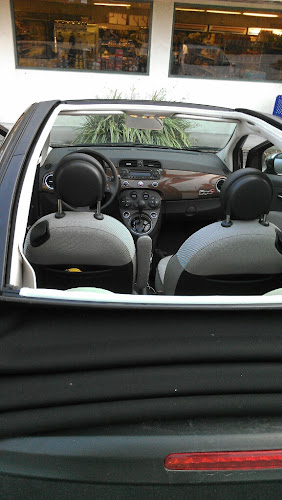 The trunk in this small car is perforce not huge but not tiny either. In the original 500cc air cooled twin cylinder Fiat 500, this space was occupied by the boxer style engine (think traditional BMW motorcycle engines) and in summer in Italy you'd see the truly tiny cars buzzing around with the trunk open to vent the over worked little motor. 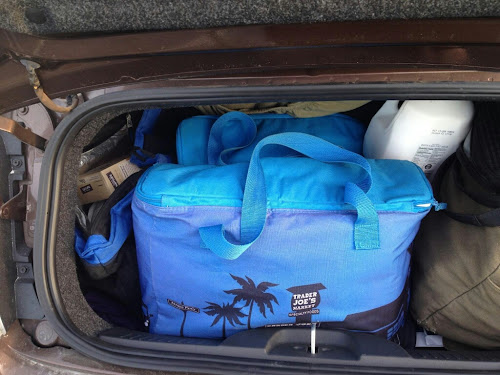 Nowadays the motor is in the front and comes with a 1.4 liter four cylinder gasoline engine. In Europe they offer a 1.2 liter and also a diesel variant that the boys on Top Gear described as somnolent. Our "Lounge" model convertible comes with a six speed automatic gearbox with an optional manual shifter which I have tried but rate as not terribly helpful, because I find manual shifting without a clutch to be a little off putting. But that's just me. The interior of the car is surprisingly comfortable. As you can see in the picture below the Fiat is a tall two-squash-two seater with a tall roof height only inches lower than the neighboring Ford Escape. 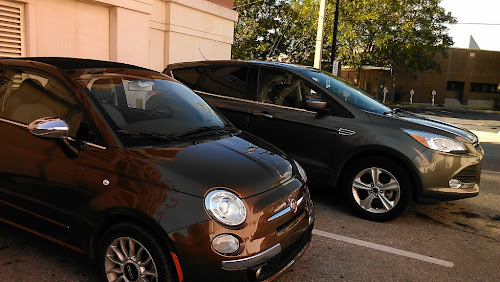 You can squash two people in the back if you want, or you can put a large Labrador there though she prefers the space of the Fusion, and though our model is the up market "Lounge" whatever that means the cheapskate who bought the car new not only did not get leather or heated seats he also declined to get his wife electric seats. Which is actually is not a problem as the seats slide easily and rapidly and they will also return to their original position if moved as illustrated (the manual for this car was written by an English speaker who has never been near a Fiat 500 as it lacks any useful information on how the seats work, the doors lock or the roof opens- all discovered by me poking around). First use the black handle to move the seatback forward. 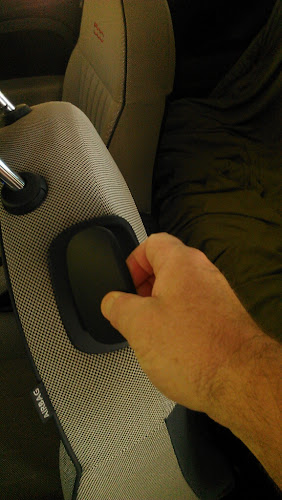 It's not hugely spacious if you are used to a five ton self propelled cup holder like an Escalade but the back seat does the job on a small zippy car that will yield forty miles to the gallon if you drive like my wife, or 35 if you accelerate like me and enjoy pissing off Escalades by passing them in your little egg car. 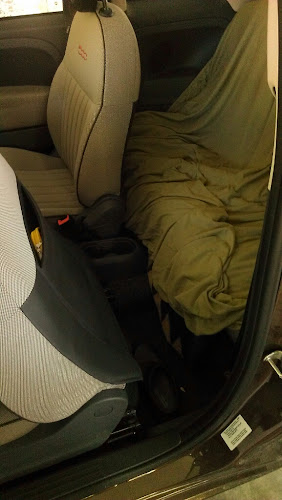 Push the seat pan back until it clicks. The seats actually are quite comfortable and I've sat in them for six hours at a stretch so far... 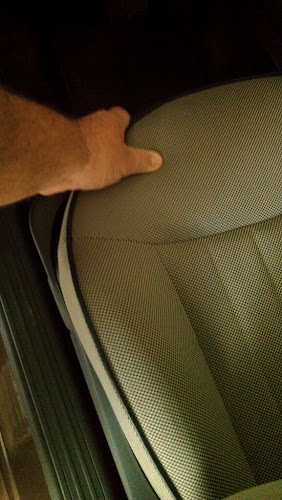 ...then press the seatback into place and voila the seat is back where it started and you can sit down and insert the key and turn on the ignition only to be greeted by an ear piercing screech from the seat belt warning noise which turns itself off mercifully, but only after you have lost your sanity as you desperately fumble to insert the belt in its lock. 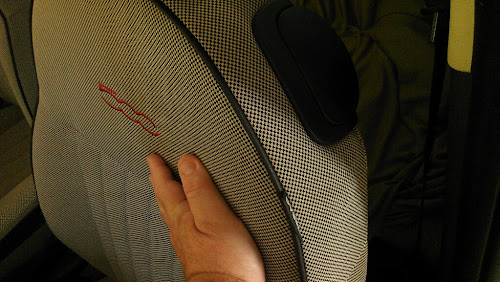 The flight deck is quite sober in this color choice. Some of the Fiat 500s have bright exterior colors which are carried over to the dashboard while the interior controls are rendered in white plastic which I think looks a bit garish. I suppose you get used to anything but this color combination is brown outside -"espresso" in Fiat sales talk- and black inside which is quite elegant. 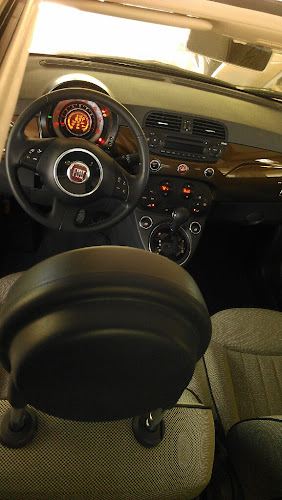 The speedometer is styled after the original rather simple instrument in the early 500 models but this modern rendering includes all possible information, with a tachometer inside the speedometer and fuel and temperature gauges. There is an inner menu to scroll through but its not very intuitive and I haven't spent a lot of time trying to figure out all the trip miles and range and instant economy etc etc...The manual is short and as usual makes for pointless reading once again. 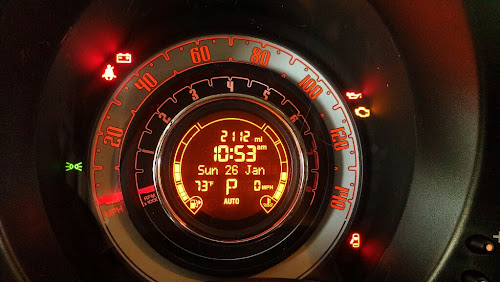 I wish the 12 volt socket stayed on even when the key is off, as it does in my Fusion which has spoiled me as I have come to enjoy leaving my phone on charge when I am out of my car. That is kind of picky of me because where it counts the Fiat is a fine car. For instance I wanted to like the Smartfortwo when it arrived in the US. However I never could get behind the square looks and the clunky gearbox that made the Fusion's automatic shifter seem smooth by comparison. Unlike the Smart, the Fiat is a pleasure to drive and is an enjoyable small car to own, whose Italian good looks are appreciated by a lot of passersby, not that I much enjoy fending off questions about my choice of car. The interior is spacious and complete, rather than feeling like a cut off full sized car. 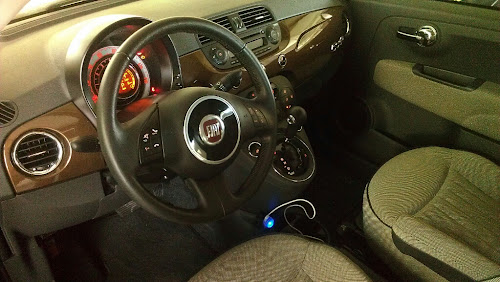 The controls are the upmarket version which I suppose is okay though pressing plus and minus buttons to change temperatures isn't as convenient as twisting knobs in my opinion. The sport button speeds up the gear changes apparently and firms up the steering for mountain driving- fat chance in Florida. The two window switches are either side of the gear knob which is slightly confusing when you are used to them being in the doors but their position makes sense for what is in fact a two door/two window car. I find the hard plastic center console rubs my right knee the wrong way when I am driving and I have to rest my leg in a slightly unnatural posture to sit comfortably. That's probably the most annoying quirk of the car. 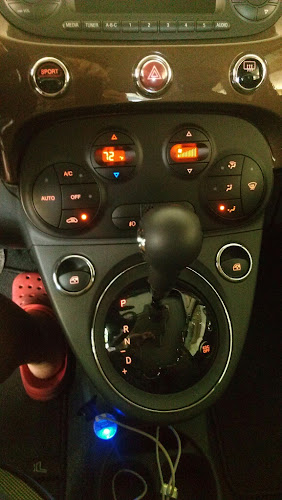 The door locks are funny, another Italian quirk, as they don't actually have any visible locks. You are at the mercy of your remote key fob to lock or unlock the two doors and the trunk. 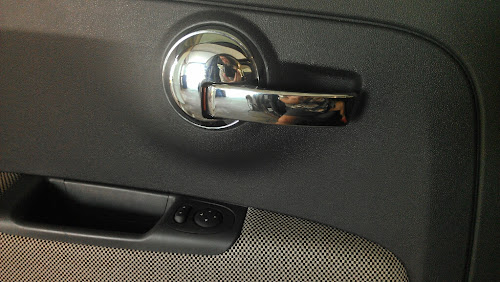 This is a fun car to drive, not only because I can squeeze it through Key West gaps denied other cars, but also because it has firm suspension ("like a truck" a critical friend remarked) and also because it is quite perky for such a small engine. It cruises easily at 80 or more illegal miles per hour on the freeway and I frequently find myself at illegal speeds in the 45 and 55 mph dreary world of the Overseas Highway. I cannot wait to drive this buzz bomb in the Appalachian mountains where my sister in law resides. In one respect it is rather like a scooter in that for some reason modern Americans think that because this is a small car it has to be an act of deprivation to drive it, and boy are they surprised to find out how fast and maneuverable it is. Being passed by a scooter or a small car is an act of defiance in the face of the natural order of things and thus The Fiat satisfies the hooligan in me. 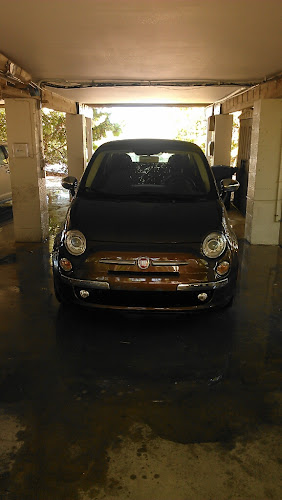 After all one is supposed to lust after this sort of nonsense shown below, which in a world of diminishing resources makes less sense than ever. And besides a hobbit like me can't figure out how to get into a vehicle this high off the ground. I'd probably end up impaling myself on the hub nuts like a bad bloody version of Mr Bean: 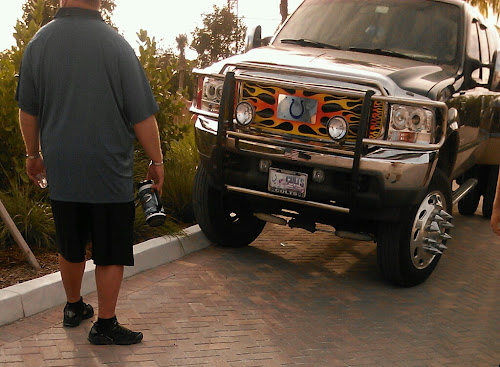 I'm not sure who would want to buy a Fiat 500 but I'm guessing its someone looking for a second car, and I think that would work just fine. But this is a complete vehicle, capable of being a sole car in the family. It draws attention wherever it goes which I find to be a little uncomfortable but it is more than a novelty, I think this is the type of car we all know we should be driving in a world of scarce resources. Once you try it you will find you are not at all deprived, that in fact small is fun and greatly worthwhile. And I'd love to drive this car to Alaska at 40 miles per gallon with heat blasting and satellite radio keeping me company. I am now officially jealous of my wife's ride.