This extraordinary article was published by Forbes contributor Rick Ungar, and granted they describe him as a leftist (ooh!) the points he makes struck me quite hard. For myself I do have a defined benefit pension plan with the city, my wife has the same with the state and I even have a third much smaller pension from the Teamsters Union. However I am one of the few these days. We lost principal in the economic implosion so it seems unlikely I will retire before I'm 70 when I can take full advantage of the promised benefits of Social Security. Yet these days any and all planning seems like a house of cards built on quicksand. I have for years wondered why my fellow working Americans have supported the Big Lies mentioned in this article. Ungar has no explanation but the future he sees is bleak. This from Forbers magazine no less, Not Truth Dig or Alternet. That's the surprise.

The Employee Benefits Research Institute (EBRI) has today released its report highlighting the intense state of insecurity American workers are experiencing as they look forward—with ever increasing trepidation—to a retirement without sufficient money to see them through.According to the data, American workers have very good reason to be afraid.Per the survey conducted by EBRI, 57 percent of American workers currently have less than $25,000 in total savings and investments (excluding the value of their homes) put aside for retirement. In 2008, that number was 49 percent. As a result, almost 50 percent of the nation’s workers are either “not too confident” or “not at all confident” that they will have sufficient resources to cover the bills in their retirement—while many who are feeling a bit better about the future may just be kidding themselves.What’s more, it’s getting worse every year.


In 2009, 75 percent of the nation’s working class had managed to put something away for retirement, even if the amount was insufficient to take care of them in a time of increasing prices and rising life expectancy. Today—just four years later—that number has fallen to just 66 percent of workers who have been able to set something aside for their sunset years.These dramatic numbers should come as a surprise to nobody as the statistics have long made clear how badly worker income has stagnated in America since the 70’s.As workers have increasingly struggled to pay their current bills, due to employee earnings remaining static at a time where the high end of the income scale rose to unprecedented heights, it has become all the more difficult for these people to set aside money for their retirement. Further, the decline of the private sector union movement and the end of the defined benefit retirement plans that were once provided to workers as a part of their employment package have only served to make the problem worse.

If you are somehow unaware of the historic stagnation in the wages paid to the American worker since the 70’s, these bullet points, compiled by the Center on Budget and Policy Priorities and based on the Census survey and IRS income reports, should open your eyes:•The years from the end of World War II into the 1970s were ones of substantial economic growth and broadly shared prosperity.

•Incomes grew rapidly and at roughly the same rate up and down the income ladder, roughly doubling in inflation-adjusted terms between the late 1940s and early 1970s.

•The income gap between those high up the income ladder and those in the middle and lower rungs — while substantial — did not change much during this period.

•Beginning in the 1970s, economic growth slowed and the income gap widened.

•Income growth for households in the middle and lower parts of the distribution slowed sharply, while incomes at the top continued to grow strongly.

•The concentration of income at the very top of the distribution rose to levels last seen more than 80 years ago (during the “Roaring Twenties”).

•Wealth (the value of a household’s property and financial assets net of the value of its debts) is much more highly concentrated than income, although the wealth data do not show a dramatic increase in concentration at the very top the way the income data do.

As for the availability of the retirement plans that were once provided in return for years of service to one’s employer, the ERBI study notes that, in 1979, twenty-eight percent of American workers were the beneficiaries of defined benefit programs which guaranteed them an income from the day they retired until the day they died.Today, that number is just 3 percent.

And then there is the decline of the private sector union movement that, in 1970, saw membership peak at 17 million Americans holding union cards. Today that number is just 7.2 million workers.As all of these worker punishing factors began at roughly the same time as millions of Americans who are now reaching the age of retirement would have begun saving for their non-working years, should anyone be surprised that the average American is now facing a longer retirement without anywhere enough money to pay for it?

Still, what continues to amaze are the many Americans who will find themselves facing true economic disaster as they enter retirement and yet have, these many years, supported the policies of politicians that cheered the income inequality that has created this crisis as somehow being the true expression of American style capitalism.

Worse still, these are the very politicians who now seek to cut social security benefits—already insufficient to cover the true costs of retirement—and Medicare.Soon, millions of Americans will more fully understand the dreadful price to be paid for having backed the wrong horse as the country is left to deal with a serious senior crisis brought on by two generations of employers unwilling to properly compensate workers for their contributions and public policies that rewarded this greed.

You see, while Sarah Palin and friends were quick to declare legislation designed to solve a serious social problem (yes, I’m talking about Obamacare) as the coming of “death panels”, the true death panels—the faceless men and women who formulated the corporate greed policies that will send our seniors into retirement completely unprepared—have been at work in America for many years.

One of the greatest tragedies a decent society can experience is the abandonment of its elderly. We have set the stage for that tragedy to play out in America through policies that have denied millions the opportunity to properly save for their retirement.

The question is, what will we do now?

Big Pine Key is the center of commerce in the Lower Keys, the approximate half way point between Key West and the city of Marathon which are set fifty miles apart. Driving into Big Pine I found myself behind this pick up truck and I was forced to wonder how he did it. If I were to balance a cardboard box on the tailgate of my truck (which I don't actually own as I dislike trucks) it would promptly fall into the street if I were absent minded enough to drive off with it there. I turned off the Highway before his balancing act came to a sticky end. 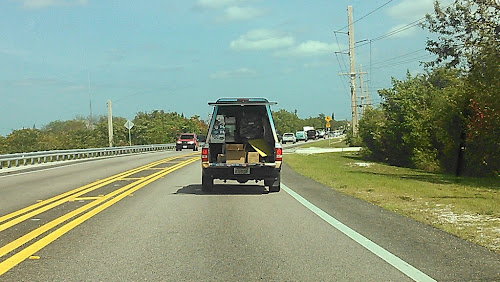 The other commercial anchor in the Lower Keys is Summerland Key. Key West Diary: Summerland Key Nowadays Summerland Key has no video store but it does boast a rather decent liquor store with a surprising selection of beers wines and rums. 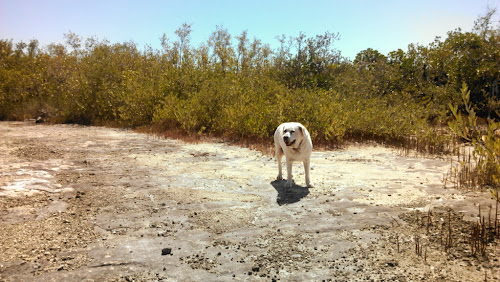 There are also a few decent walks off the main strip through Summerland. When I first got her Cheyenne was always ready to go for any walks after a lifetime spent on a chain or locked away. Nowadays she is more refined in her tastes and she decidedly prefers city walks. 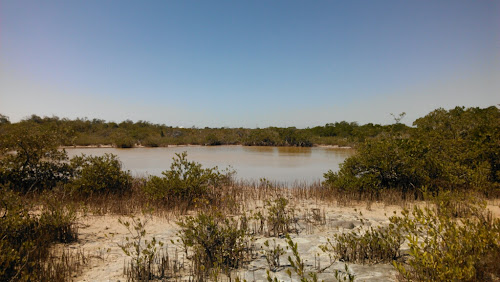 Which sometimes feels a bit tedious to me because I enjoy the back country. Usually there's no one out here, and the wind blows like it does in the desert. Come out when the north wind blows and the sounds of traffic are blown south leaving only the sound that is the rushing of air past your ears. 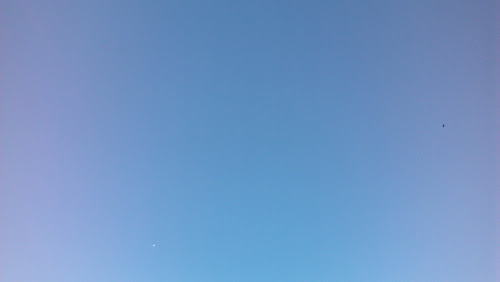 Some time ago a blogger in snowy Wisconsin posted a picture of a blizzard for me. Living Among Tourists: Photo of Snow Storm... Not everyone got the joke as humor is a personal thing as I am fond of saying. Thus the picture above returns the favor to Martha Tenney who now publishes a new blog, Wisconsinland . She is in the painful process of finding a new home in a snowdrift Up North so I have included a slice of Florida Keys skies in our version of a blizzard, above. For some reason Cheyenne proved willing to explore at least a little these trails this cooler time of year so I took advantage after several years away. This trail used to be a dumping ground for garbage of all sorts, old boats, construction material and rusting appliances. 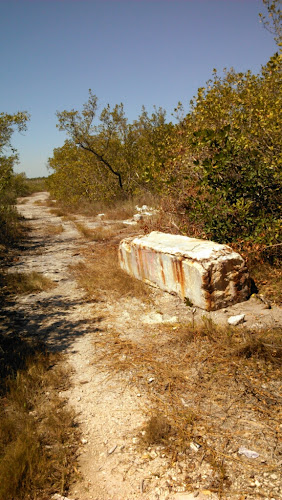 Now the county has cleared the mess away and put down cement barriers to keep out future dump trucks. 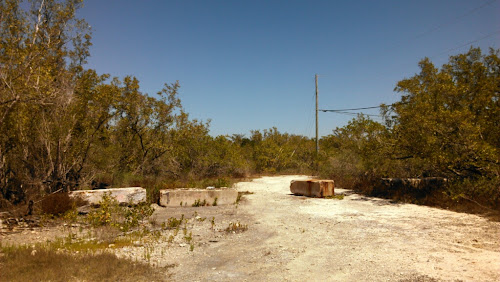 These rock paths were originally built to serve planned developments across the Keys. Fortunately only a few of the developments were built, fortunately they were built else I'd not have a home out here! However large areas of mangroves that are in their natural state were left that way only because developments failed. This was an era when canals were cut trough the rock wit dynamite, a process that would never be permitted today. 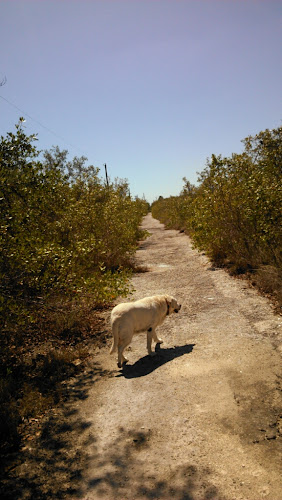 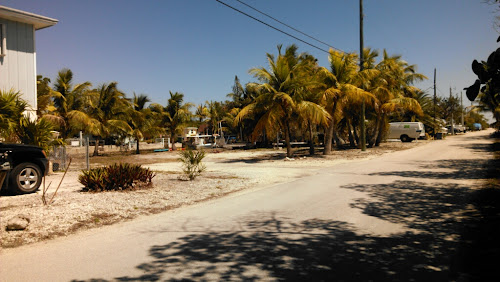 This is Cheyenne country where peop,e and dogs live and walk, a small Summerland community behind a canal parallel to the highway. 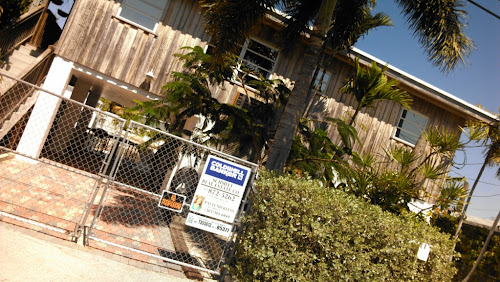 South of the Overseas Highway Summerland Keys boasts an airstrip and suburban homes with hangers, but north of the highway the canal opens up access for commercial fishermen. 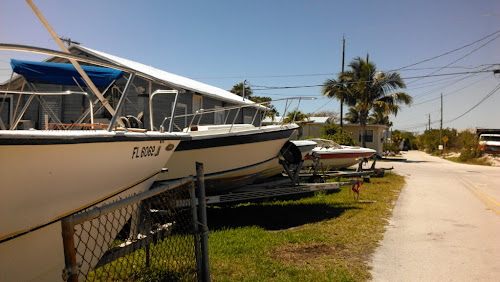 Returning home to my small island a few miles north between Summerland and Big Pine I live south of the highway away from commercial activities, between a canal and the salt ponds. These are the local anglers I see across my street. 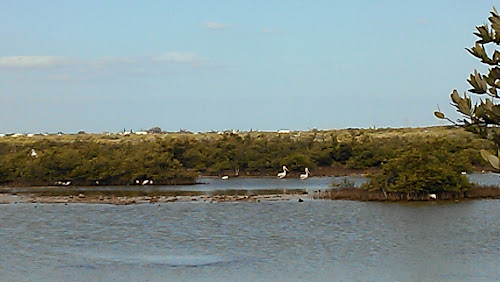