I was under the house organizing the laundry, as one does on a Saturday when one isn't working when a cheery voice called out. Huh? No one's cheery on my street. 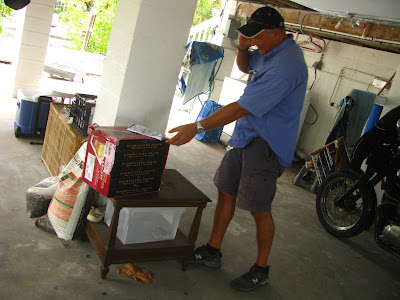 Andy was looking to unload frozen meat as he drove by looking for customers now that winter's over. I felt safe; I buy nothing without my wife's permission. He was a great salesman and kept edging me into feeling like a fool for not buying thirty pounds of frozen beef for $180. "My last box," he kept saying, "then I can go home." Like I was his angel of release. I called my wife at the gym and she bargained him sight unseen. "Organic?" "Natural" he countered- no hormone. 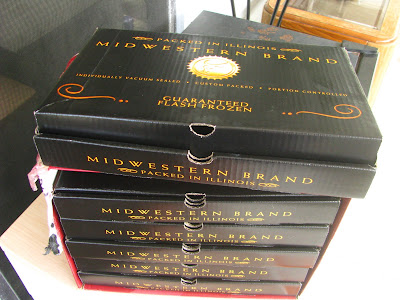 My wife, being who she is and never paying retail, got him down to $150 over the phone on my promise I could stash the food in the freezer and I handed over a credit card. This was the weirdest food shopping I'd done since we cruised Central America in a sailboat together lo these many years and even down there most food is bought American style in a supermarket these days. This meat looked good to my untutored masculine eye. 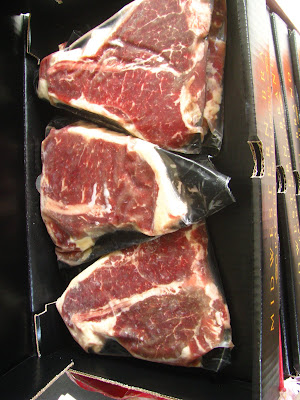 There were sirloin, filet mignon, and a dozen hamburgers ("Good for a party," my wife announced). Cheyenne took a close interest in the proceedings and as Andy drove home to Fort Myers, or more likely continued to cruise the neighborhood looking for some more "last customers" (for delivery call 239-822-4091) I hauled the box up to the freezer. 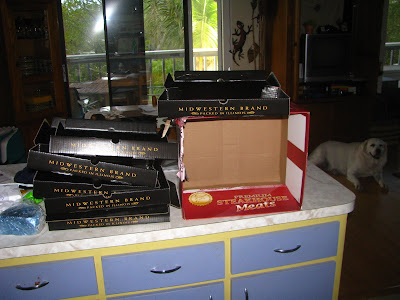 Packaging as usual was excessive but I got the little frozen packets into the freezer without too much chaos, and as I contemplated a future filled with dead cow (and hoping it really is good stuff) the power went off. 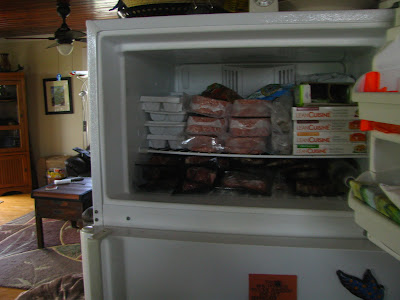 WTF? After I spent time here on this very page extolling the beauty of modern public utilities in the Keys the fans stopped whirling and fridge went silent. Well, bugger, this was a message from the gods, buy food for freezer storage and we take away the motive power. My wife called from the gym, as one does: "Is the power out there too?" her elliptical encyclical was interrupted apparently. I took the boxes down stairs wondering how some people manage to make a living, "30 years of doing this," Andy said cheerfully, sweating profusely in the heat. I could no more breeze up to a stranger and sell him a box of meat just like that than I could put a revolver to his head and blow his brains out. How do some people do it? I think it's genetic. 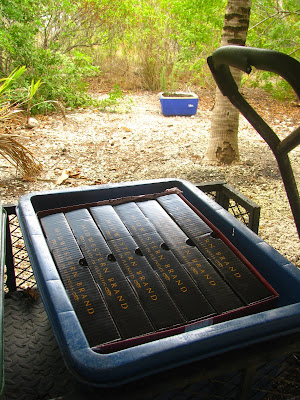 I will have to break the boxes down for recycling but that can come later. Meanwhile I have to finish off the laundry, interrupted by the power outage, then I have to put the gas kettle on the stove for tea, and sit down to read the Blue Paper, as one does on a Saturday morning to find out who's been naughty and who's been naughtier. All this interrupted by a visit from the butcher from Mayberry and his cheerful 1950s patter. The power outage by contrast was a non event.
Posted by Conchscooter at 9:01 PM 2 comments: Links to this post

"I am a newbie in town," the woman said rather disarmingly and went on to ask me a question which I answered. Then I went on to give her a history of the answer which, when I heard myself doing it I realised I was turning into one of those people who has enough history in Key West everything starts to become a chronology. "The Paradise section of the paper comes out on Thursdays," I started to pontificate, going on to say how I used to prefer the old publishing schedule, blah blah blah. She was a sweet woman, a captive audience as her foot was encased in a plastic cast of some sort and she nodded along until I caught myself and shut up. 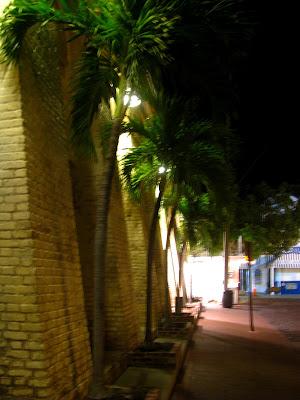 It was one of the reasons I started this blog, to photograph and pin down the changes as they happen in and around Key West, to record the changes as it were. I listened as the woman from Georgia, told me her tale of moving to Key West "on a whim" and learning to live in small spaces over the past eight months. The freshness of it all reminded me of Key West seen as a new space and when she asked about the city at night I said I frequently wandered the streets with no problems. She seemed relieved- sort of- but I know that when I take my night time walks during my lunch breaks I never get accosted or bothered. Perhaps I exude some anti-drama musk, or my beard frightens people or I just look too ornery to be messed with. On another topic I put 20,000 miles on my Suzuki Savage 650 single, similar in all respects to this one right down to the same saddle bags as I put on mine. Perhaps it was my old Suzuki. 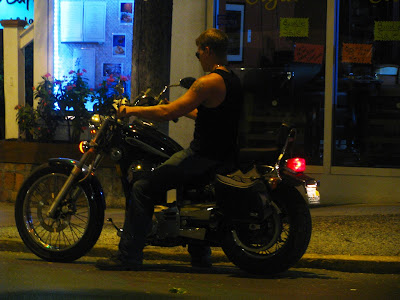 He was blipping the throttle as though learning how to ride, on Front Street at 10 pm. Eventually he rolled away, leaving me to remember how uncomfortable I found the cruiser seating position and how much I liked the belt drive and how bad the mileage was, no better than the Bonneville at 45 mpg with a tiny fuel tank to boot.

In many respects Key West has yet to identify itself to visitors- is it low brow mass market or seeking to encourage the well-to-do to the island? Some residents hate the cruise ships and blame all ills on them while the merchants on Lower Duval have to pander to them and what I can only describe as their odd purchasing decisions. I mean, who buys this stuff? Is it ever appropriate in Peoria to wear these sentiments out in public? 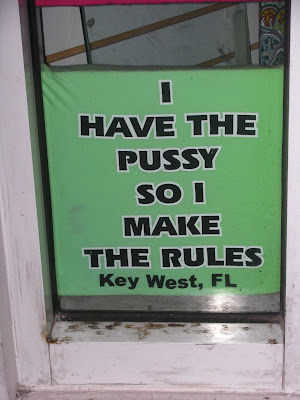 Are there crowds of people showing up at Starbucks across the Great Plains ordering their first latte of the weekend wearing these sentiments? On Whitehead Street in front of the Audubon House a young woman was pushing her bicycle and with a powerful pair of lungs was complaining to her current friend about the perfidy of friendship in general and one instance of betrayal in particular...about how could she do such a thing and still call herself a friend? etc... etc... the injustice of it all. 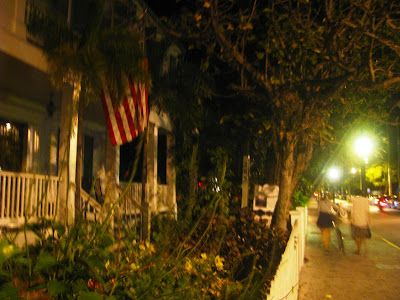 Sometimes Key West sounds like a college town without the campus but with all the drinking.
Posted by Conchscooter at 5:01 PM 3 comments: Links to this post

I feel like I have the fairground to myself when I take a night time stroll through the tourist corners of Old Town Key West. 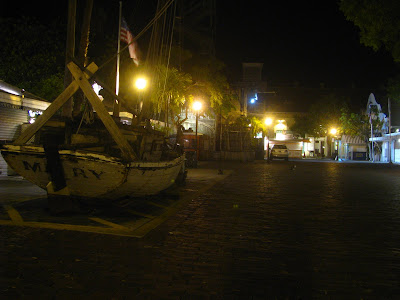 These areas are bustling with tourists all day long and into the evening as they gather at Mallory Square for sunset. At this hour of the night there's no one out there and I get to wander at will. 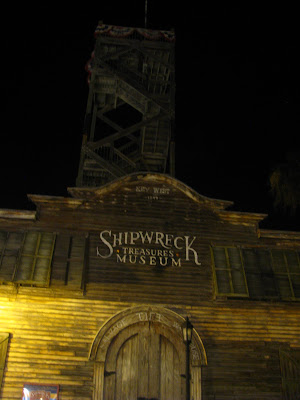 I've never been inside the Shipwreck Historeum a place where actors dress as pirates I'm told, I am going to have to pick up the pace and get some more attractions under my belt...This next picture I took at the entrance to Mallory Square, in the background is what's known locally as the Pez Garden, more formally as the Sculpture Garden where the heads of the city's famous reside on plinths resembling pez dispensers. 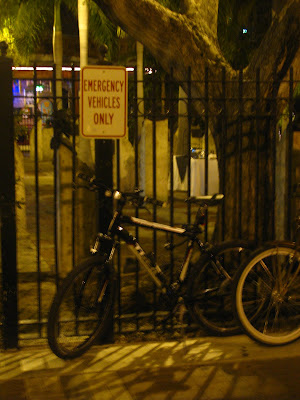 I don't think the bicycle counts as an emergency vehicle but I liked the irony of the sign. Mallory Square, almost deserted by night is a very different beast from the place most visitors see when it's bustling. The square is named for the Secretary of the Confederate Navy who, during a long career held a number of posts in Washington (and thus subsequently in Richmond). 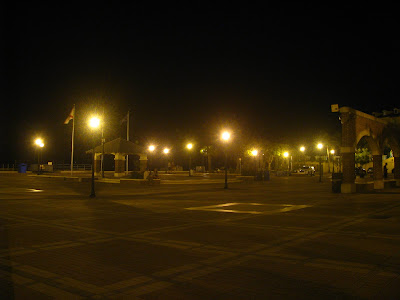 I listened to the sound of the harbor waters sucking at the pilings of the ship dock for a while and then started wandering. We chatted a while this lady and I as she packed up the tools of her sunset trade. Naturally I was attracted to her dog waiting impatiently and yawning in his basket. 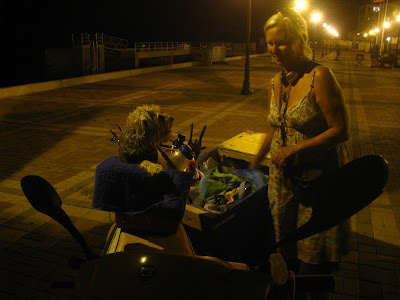 Soon enough I had to head back to the office for another five hours of dispatching fun. If you can call it that.
Posted by Conchscooter at 11:01 AM 2 comments: Links to this post

It comes as a surprise frequently when people learn I enjoy working nights, and when I tell them I get more time off and get to spend more time with my wife they generally look at me as though I were crazy. Night dispatching for the police department is more interesting and generates more actual police work (in my opinion) than a lot of the communications work during the day as administrators are all asleep when I'm answering phones. 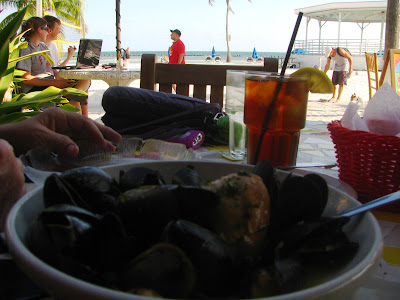 My wife concurs with this view of my work, saying we get more time together when I'm not getting up before dawn and going to sleep straight after dinner. Because my wife's a teacher and works during the day we have to pick and choose where our paths will cross. Thursday afternoon it was over a plate of white wine mussels at Salute on the beach. It was a lovely afternoon, not too hot (85 degrees) with a fresh southeasterly breeze to blow away any hint of humidity. 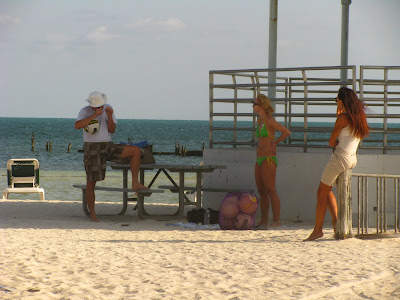 That I was heading in to work could be construed as a damper but it just made the moments shared at the table all the more precious. There is a lot written about how to spend an afternoon in Key West, but a shared plate at Salute, sitting out on the porch rates quite high in my book. And I get to do it when I want because I work nights.
Posted by Conchscooter at 5:01 AM 3 comments: Links to this post