The Mosquito Coast was without doubt the most dangerous section of our trip from San Francisco to Key West. I hope it is obvious by now I am not given to hysterics, at least not publicly, at the thought of exploring strange new places and I approached this desolate part of the Western Caribbean more worried about getting lost among unmarked, poorly charted islands than I was about getting shot. In case you are wondering we met no one on the journey among the islands and we did not get shot. We were lucky. Or foolhardy. 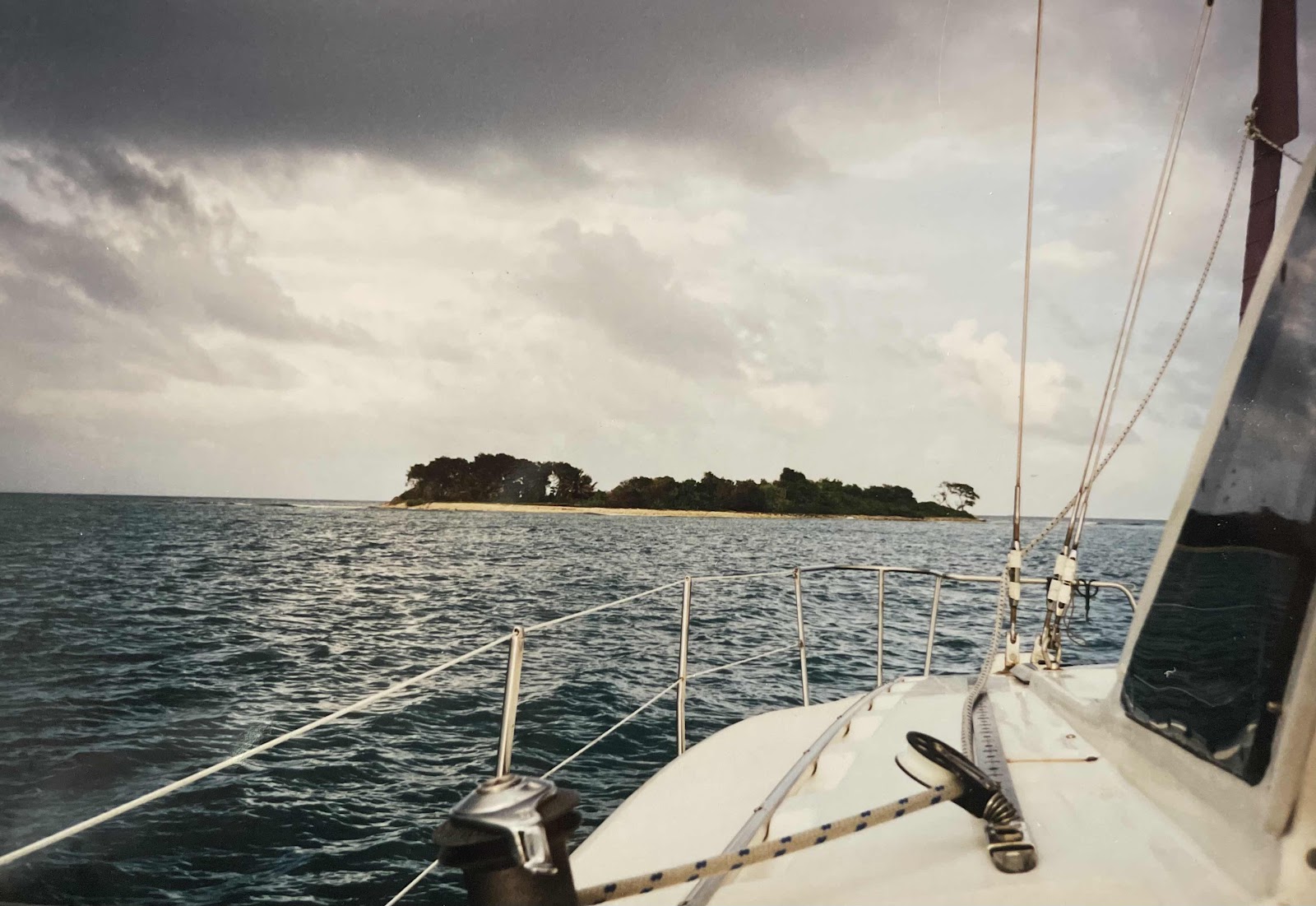 As the name implies the Mosquito Coast, the Caribbean shore of Nicaragua is buggy, swampy, low lying and utterly unremarkable.  Which was why I was attracted to it! I was pretty sure we wouldn't be back in the neighborhood and even though we had no intention of sailing into the communities on the mainland, Bluefields principal among them I was attracted to the idea of exploring a relatively unknown bunch of desert islands. This coast is occupied by English speaking descendants of Africans brought by the British and abandoned when the coast proved uneconomical to farm even with slaves. The pearl divers and fishermen of the area scratch a living and are largely ignored by the central government, Spanish speaking and far away in Managua.  Most of the many offshore islands are uninhabited specks and thus interesting to me. I wanted to walk my dogs in unusual places. 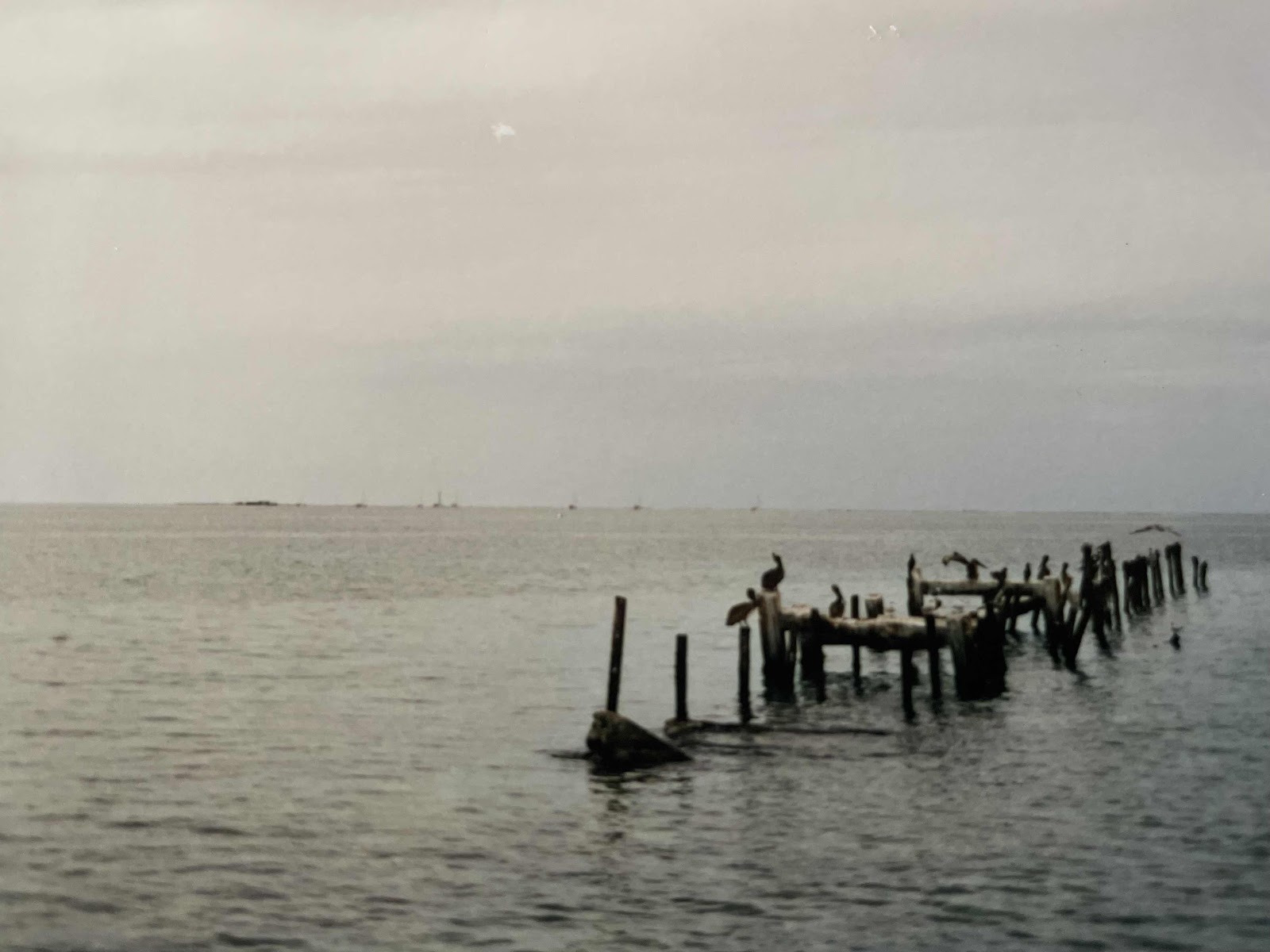 The danger here in 1999 was from former Contra rebels funded and armed by the US to overthrow the Sandinista government, an outside effort which as we have seen more recently seems bound to fail. When the Americans withdrew they left behind expectations among armed isolated disaffected former guerillas. By the time we got to Guatemala the story of a sudden attack by armed men on a Dutch family cruising these islands left the child paralyzed, the wife dead and the father seriously injured when their dinghy was sprayed with bullets. Just like that; no report of provocation it was pure and simple banditry. Why we were spared was pure luck. We wandered for a few days, landing on buggy islands walking the dogs of course and taking short day sails trying to unravel the ancient charts whose latitudes and longitudes bore only the faintest resemblance to modern GPS signals. It was a strange overcast interlude drifting between reefs and low lying islands and very satisfying, despite the gloomy nature of the places we stopped at. Finally we arrived at a well known anchorage back in “normal cruising country”: Bobel Cay. 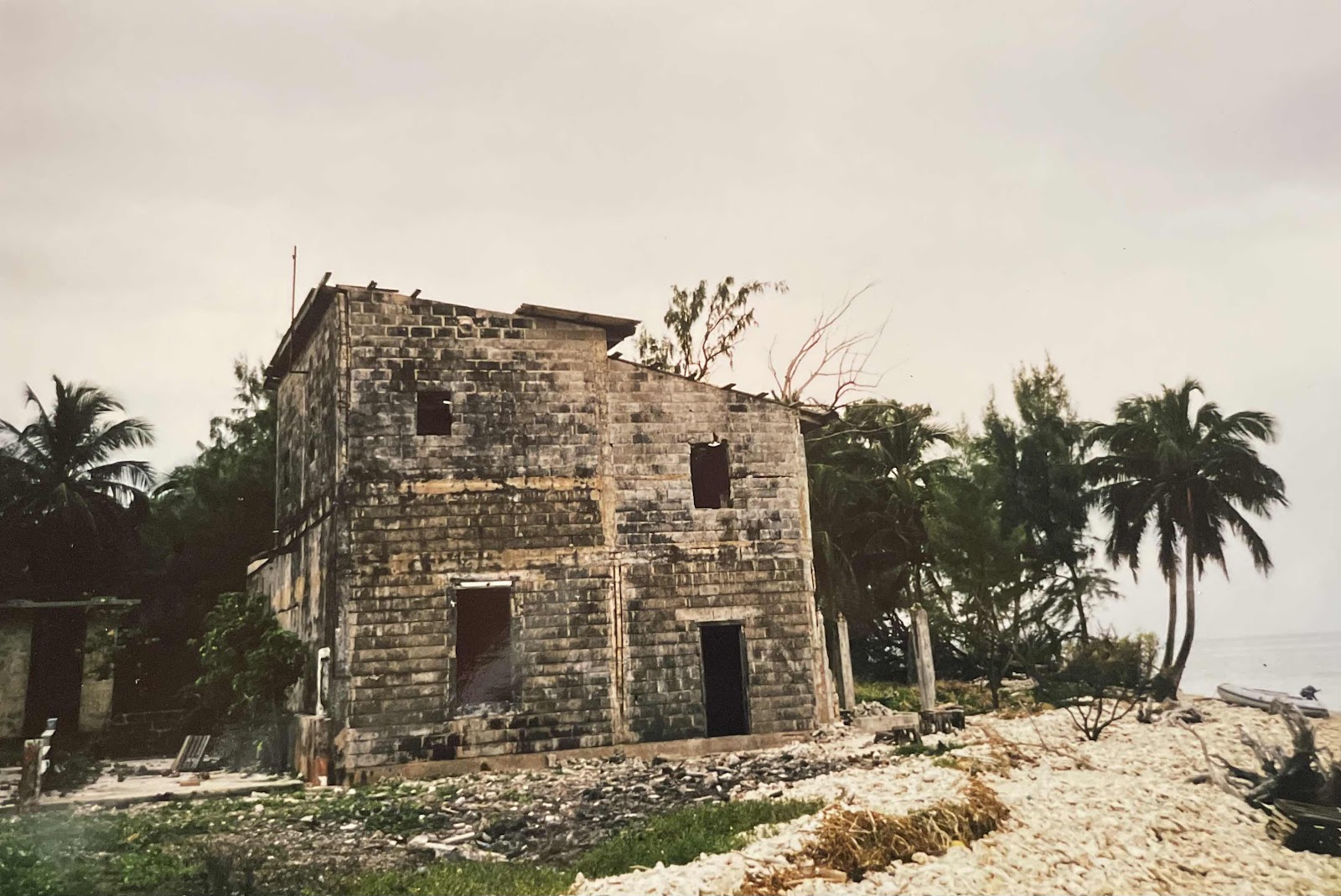 The photographs of old structures refer to our longer stop in fact  at Bobel Cay, Honduras, a small uninhabited island with a mile long reef curving away to the north. These small islands are known to sailors as the Vivario Cays (pronounced "keys") and are a rest stop for commercial fishing boats. Indeed the formal building you see above was once an ice house complete with docks where the fishing boats would drop off their catches and buy supplies. Now it is as you see it (or at least it was in 1999!) abandoned and perfect for Debs and Emma to explore. 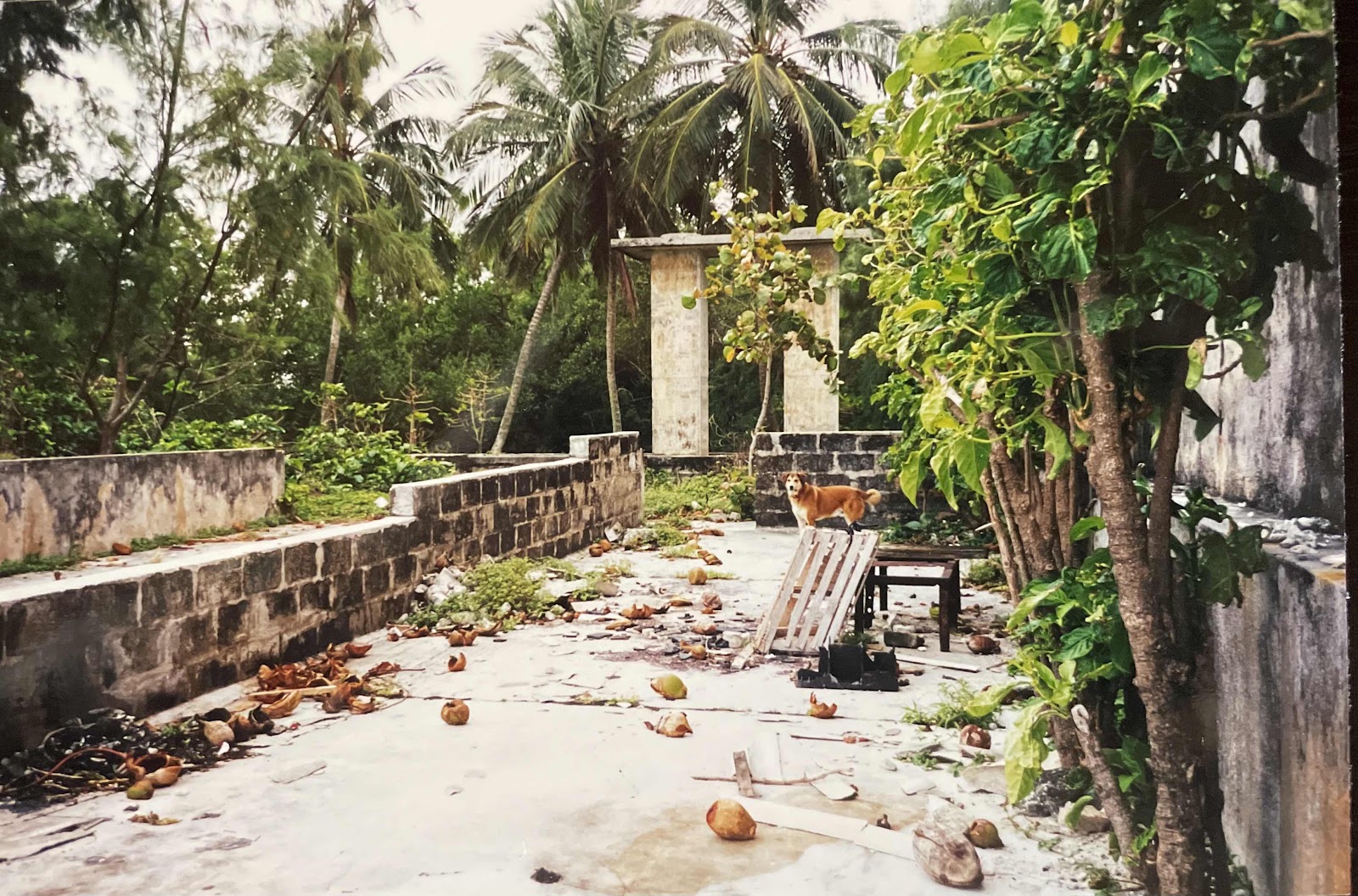 The dogs loved it but I will tell you I have never ever been any place so buggy. The no see 'ums and mosquitoes were unbearable even with lashings of deet on ourselves and some on the dogs. I guess they were desperate from mammals blood but we resorted to putting spray on our hands and brushing the dogs. The island was their canine kingdom and we explored it all and that didn't take long...a ten minute amble in each direction at most. 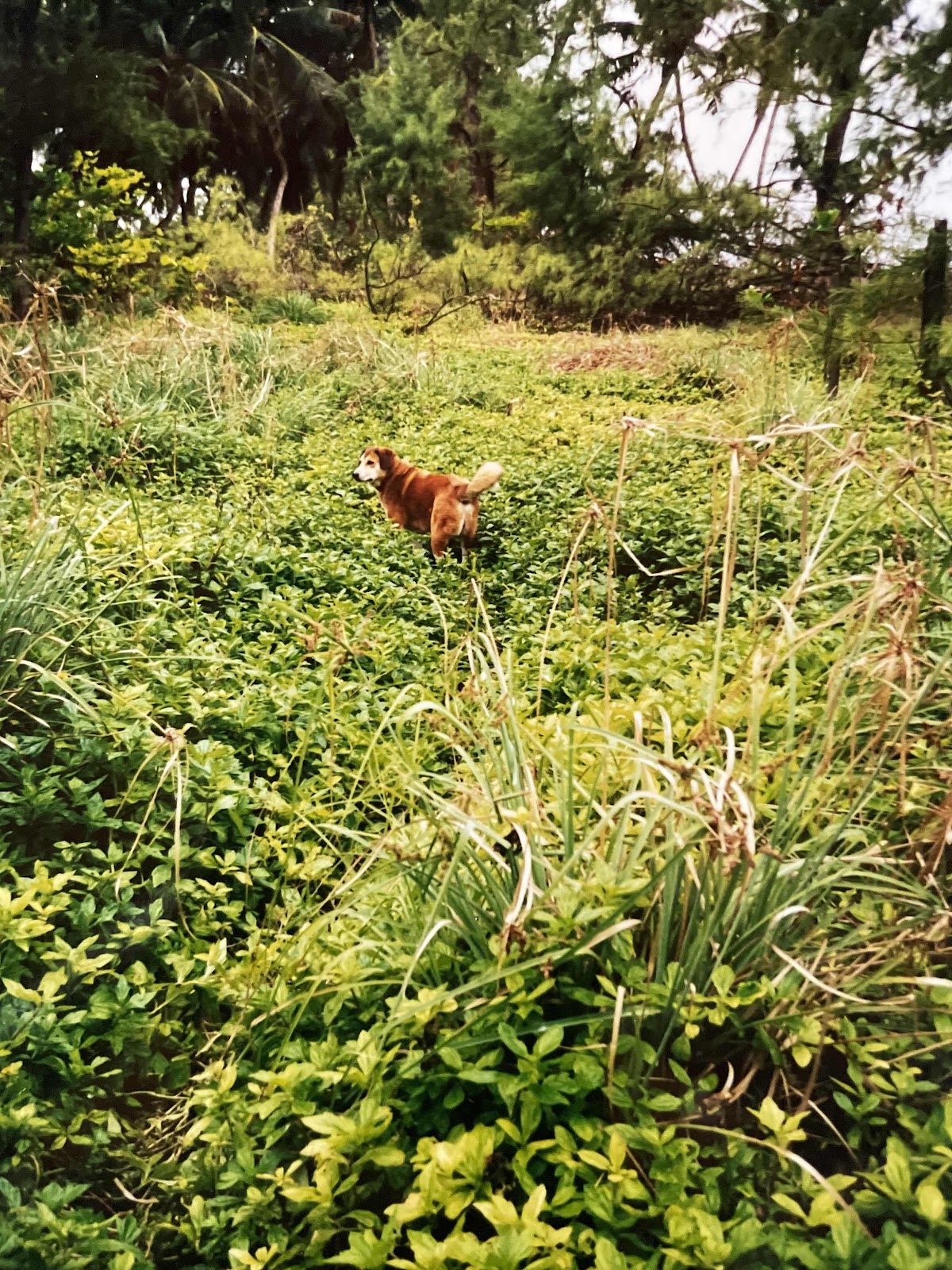 I came across this marker and I know nothing about it. He died before the Internet put all of us online so a quick Web search shows nothing. I have no idea if it was a memorial or the burial spot for Rolf Stieber who lived his dream. I assume he was English speaking thanks to his epitaph but who knows? My notes recall the spot as sad and spooky. Emma was too busy rooting around for such sentiments. 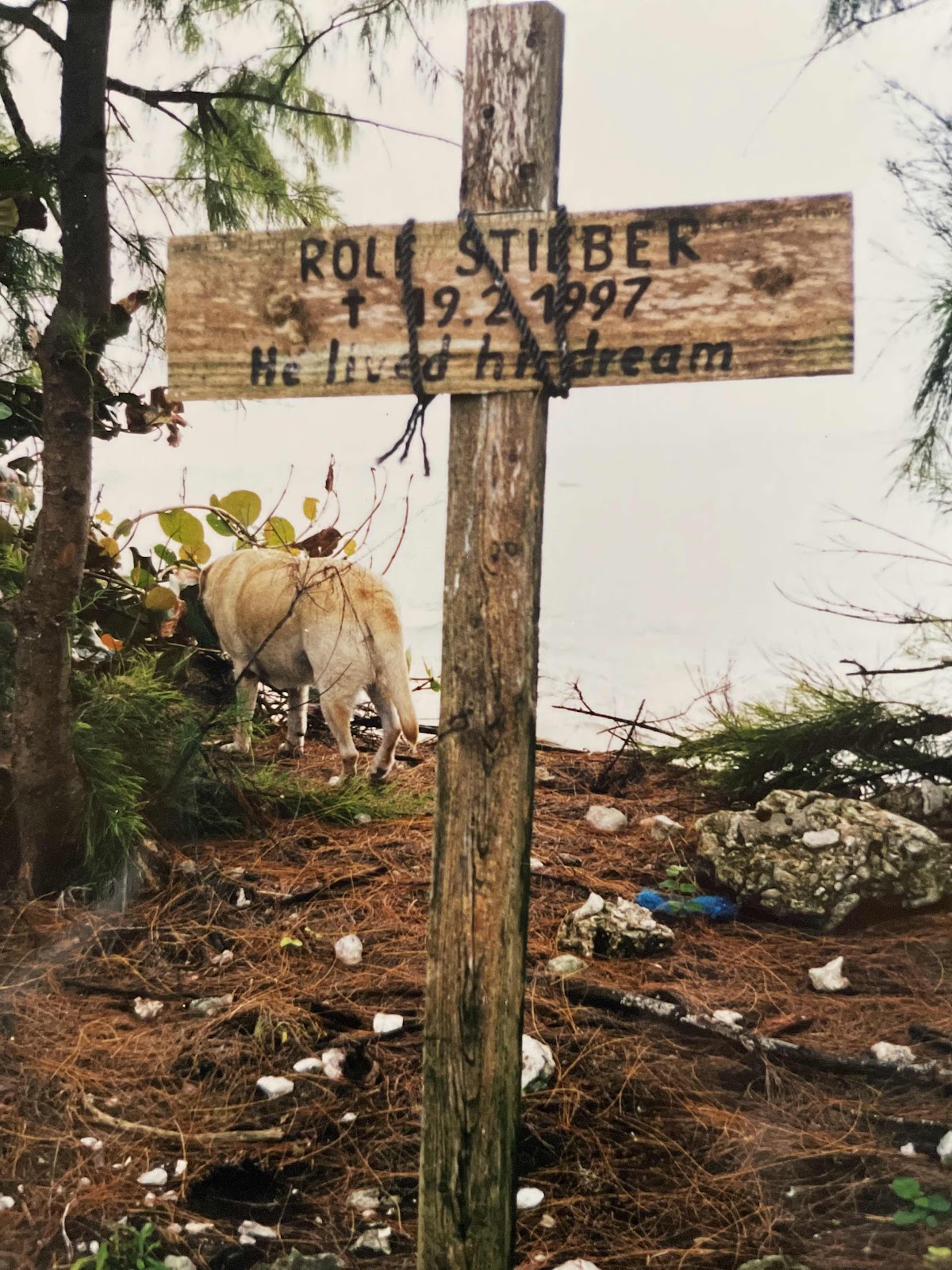 A group of sailors stopped here, one of them with a sailing dinghy taking advantage of the strong breeze and flat waters behind the reef. 350 miles east of this spot lies Puerto Rico roughly.  Aside from a. few Honduran fishing boats we were alone and the end of the century was in sight in a. few short weeks. Y2K was the subject of conversation but we were so remote the implications of a world wide computing crash meant very little to us. We deiced to have a grill on one of the sand spits at low tide, dusk. So we did and I photographed it! I quite admire my pictures from this trip actually. Imagine I had no chance to see any of them as we went along and we bought film and stashed t to be developed later and hoped for the best. Some film was spoiled but we told a story with our pictures and I quite like the street scenes and spontaneous involvement of the camera among us sailors. 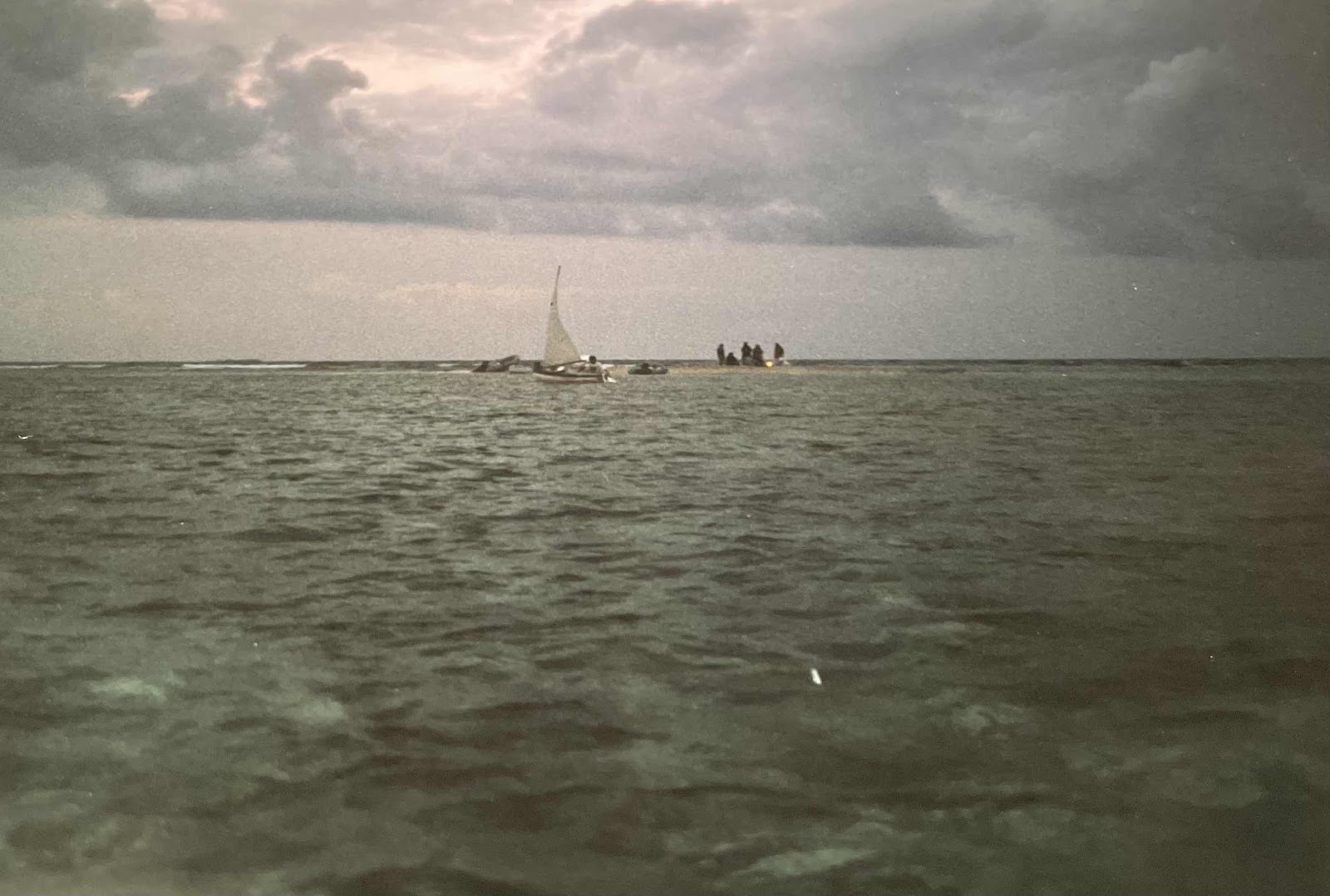 We brought food and wood to the little lump fo sand in the ocean and we ate and drank and told stories and wondered what the new century would bring. We made wishes until one of the sailors traveling with a Columbian girlfriend much younger than he brought the party to a crashing halt. Curly made his wish, the usual generic thing you do and then Maria piped up "I wish for a beautiful American baby" which caused Curly to spit up his beer and the rest of us to go suddenly silent with embarrassment. We stared at our toes in the sand and tried to figure out what to say next. There was quite a lot of picking up of girlfriends by older solo American sailors in Colombia at that time, a country with no future and lots of beautiful young women anxious to find a way out. We described the old men as having. great deal of "Peso-nality" which perhaps was cruel but I did not much like to see the ease with which desperate people could be used. Curly was better than most inasmuch as he took her along and tried to treat her as one of us, but there was that reminder that we were privileged and rich in a world where wealth is reserved for the few. 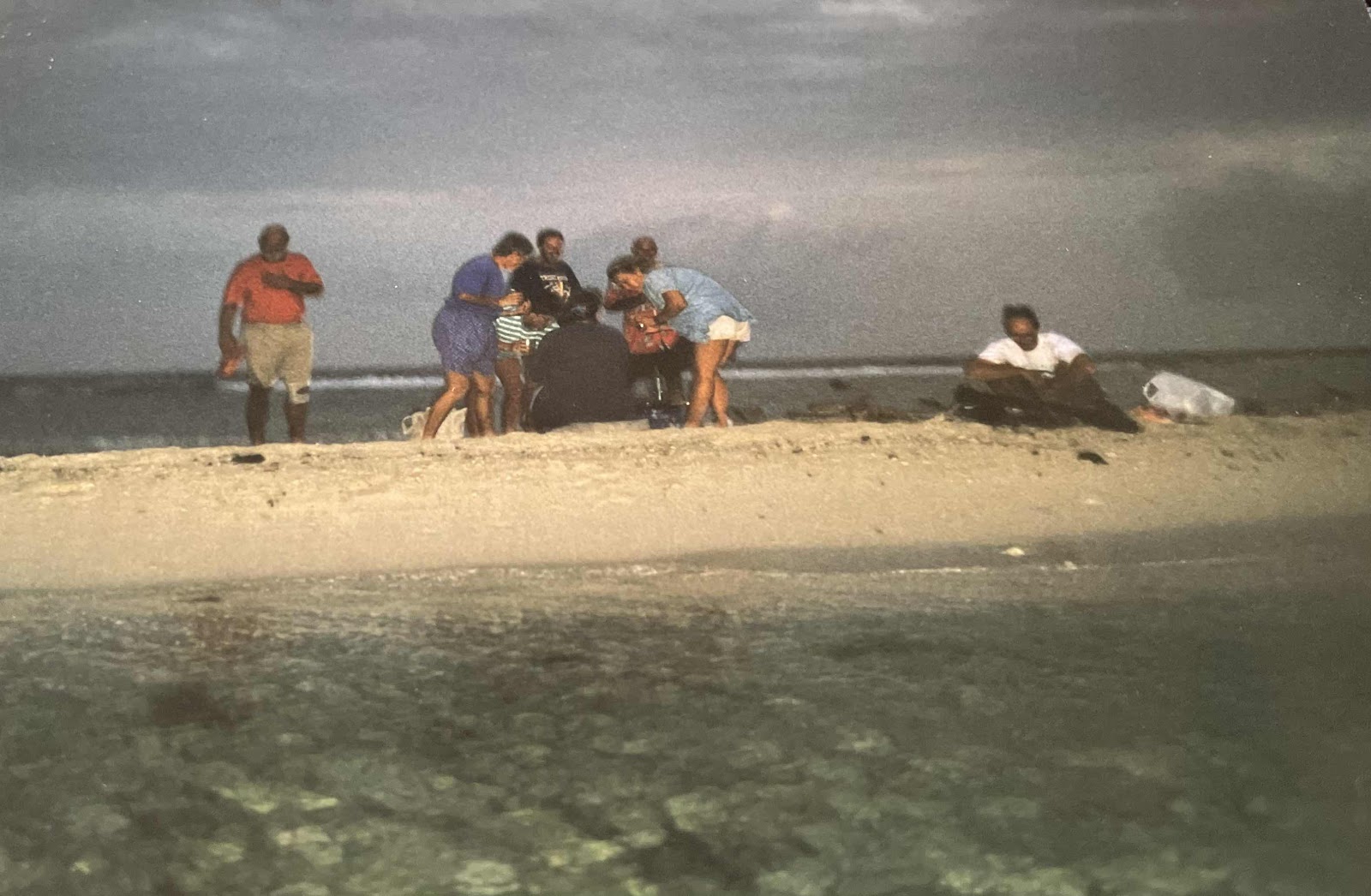 Of course our dogs were there in the midst of us, as much a part of our cruise as anyone, stargazing, poking the fire, cleaning up the remains of the picnic. Even at high tide the sand bar was above water and we lounged into the night pondering the sailing life and Curly's future progeny and the next step along the road to Guatemala by way of the Honduran Bay Islands. 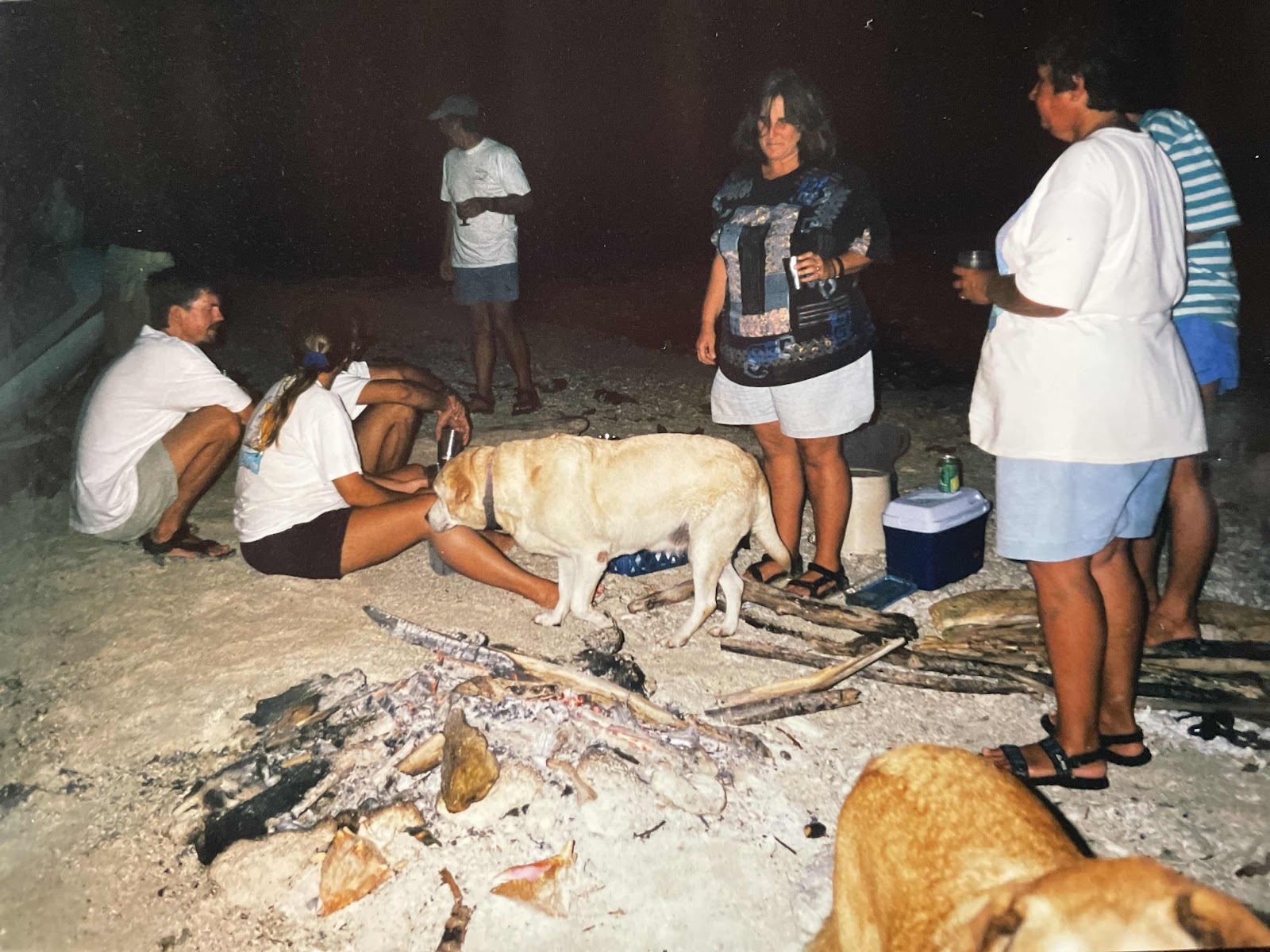 Tom from the 48 foot catamaran had a spare small spinnaker he sold us for $75 and we went for a test sail to learn the ropes...Flying a cruising spinnaker on a. catamaran is easy and we had the extra halyard to raise the sail so up it went and out it flew and along we dashed under the master's watchful eye. Sailors in catamarans were rare in those days and he was glad to pass on the knowledge he had learned from years of sailing and fishing the Caribbean in his bg old boat. 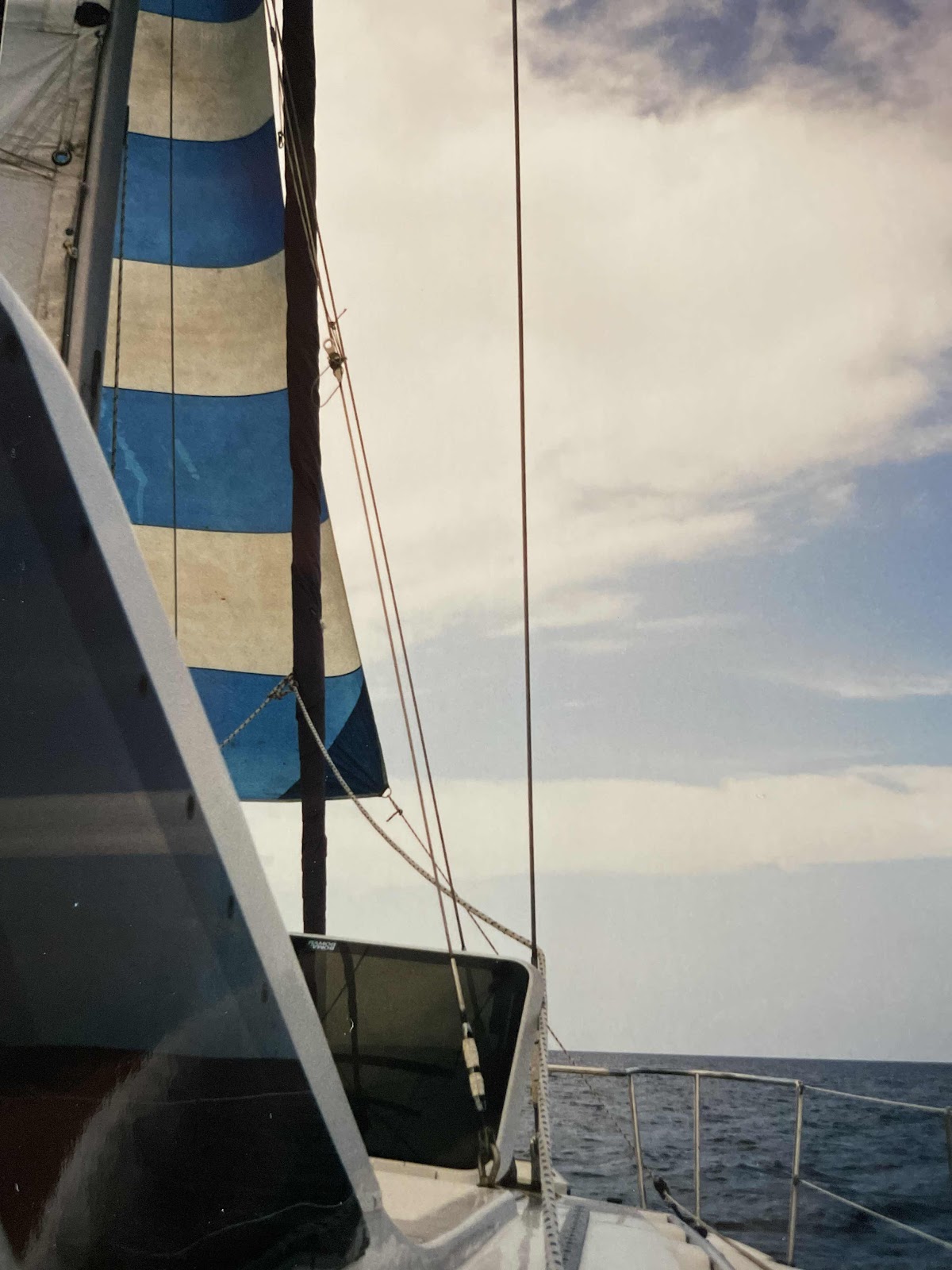 We liked to snorkel the reef in the Vivario Cays, a long slice of underwater coral filled with fish. However the ocean side of the reef fell off into great dark depths and one day Tom came alongside in his dinghy and told us he wasn't going swimming anymore. There were just too many sharks in the water, big hammerheads and bull sharks from the ocean waters among them. The idea that Tom found "too many" sharks in the water scared us rigid- if he wouldn't go swimming you can be damned sure we were never going to put a toe in the water! 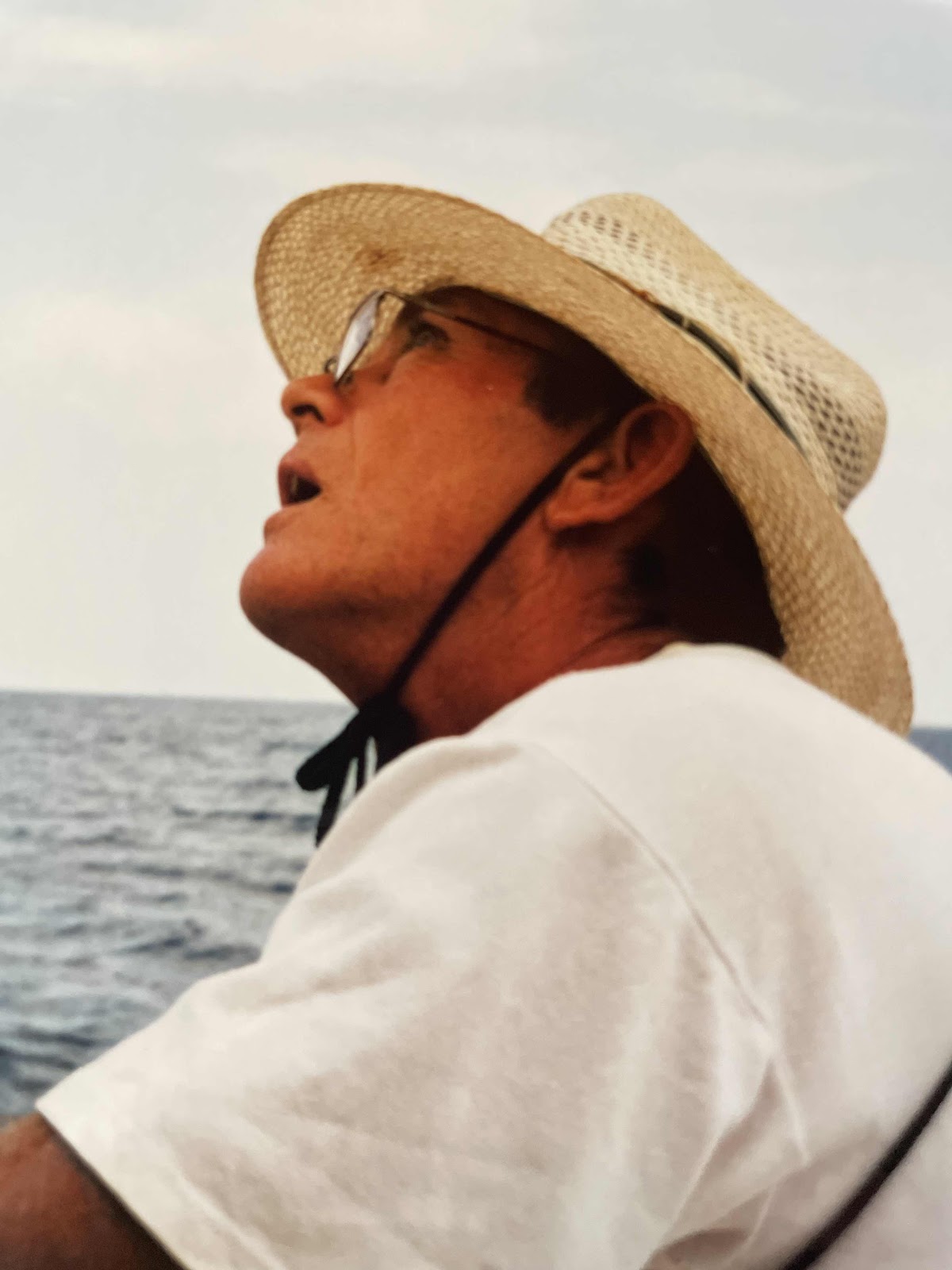 It was time to leave and as we rode a weak cold front west towards Guanaja, the first Honduran island 90 miles away I struggled with the confounded outboard whose fuel tank had sprung a leak, To my astonishment I fixed it with some JB Weld and a lot of patience. One of the great pleasures of catamaran sailing was that the boat didn't lean from side to side ("heel") so I could fiddle easily with repairs while the autopilot steered. 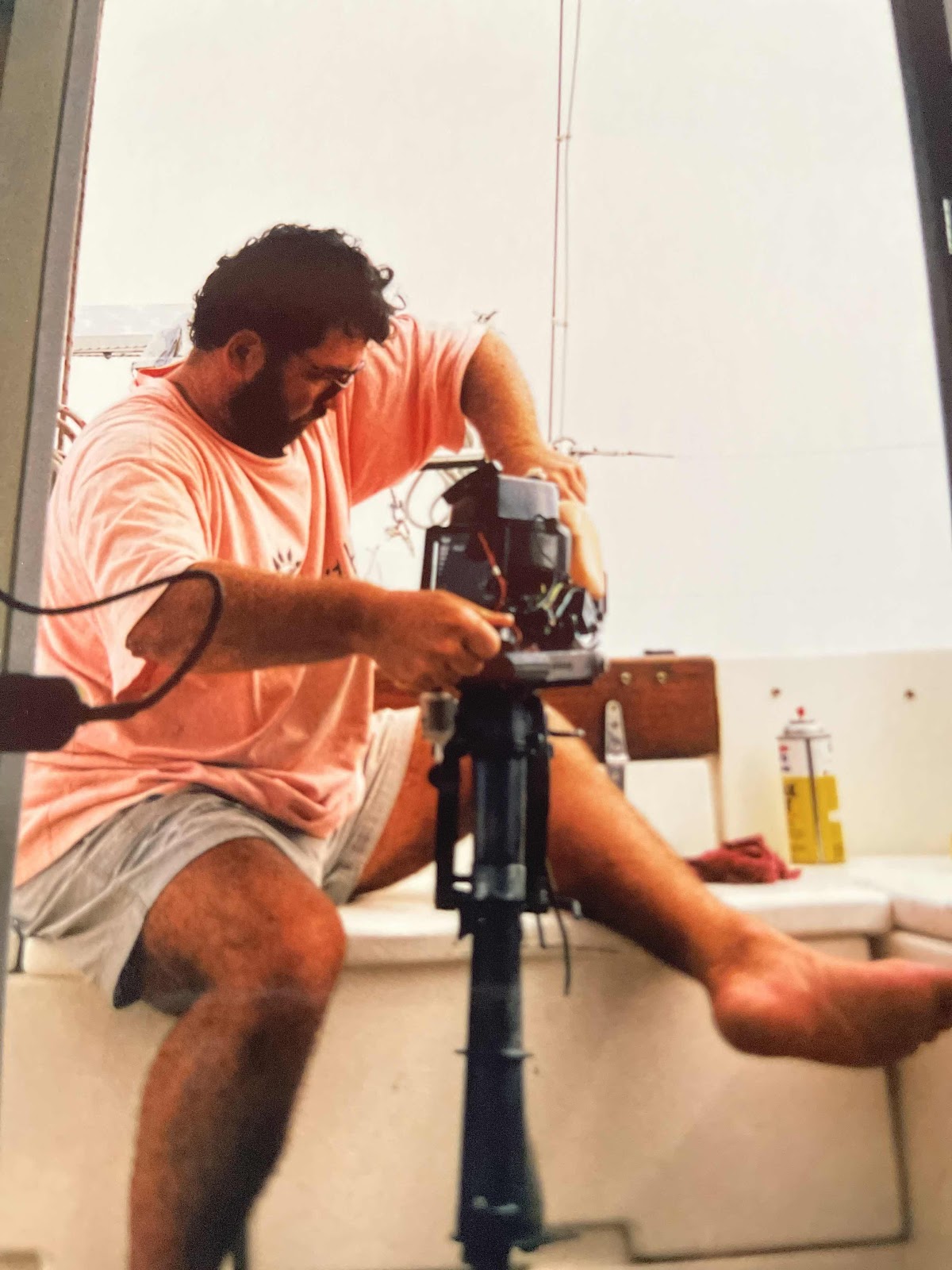 One more night watch and we saw mountains in the morning. Well, at least they were hills, all green and everything. 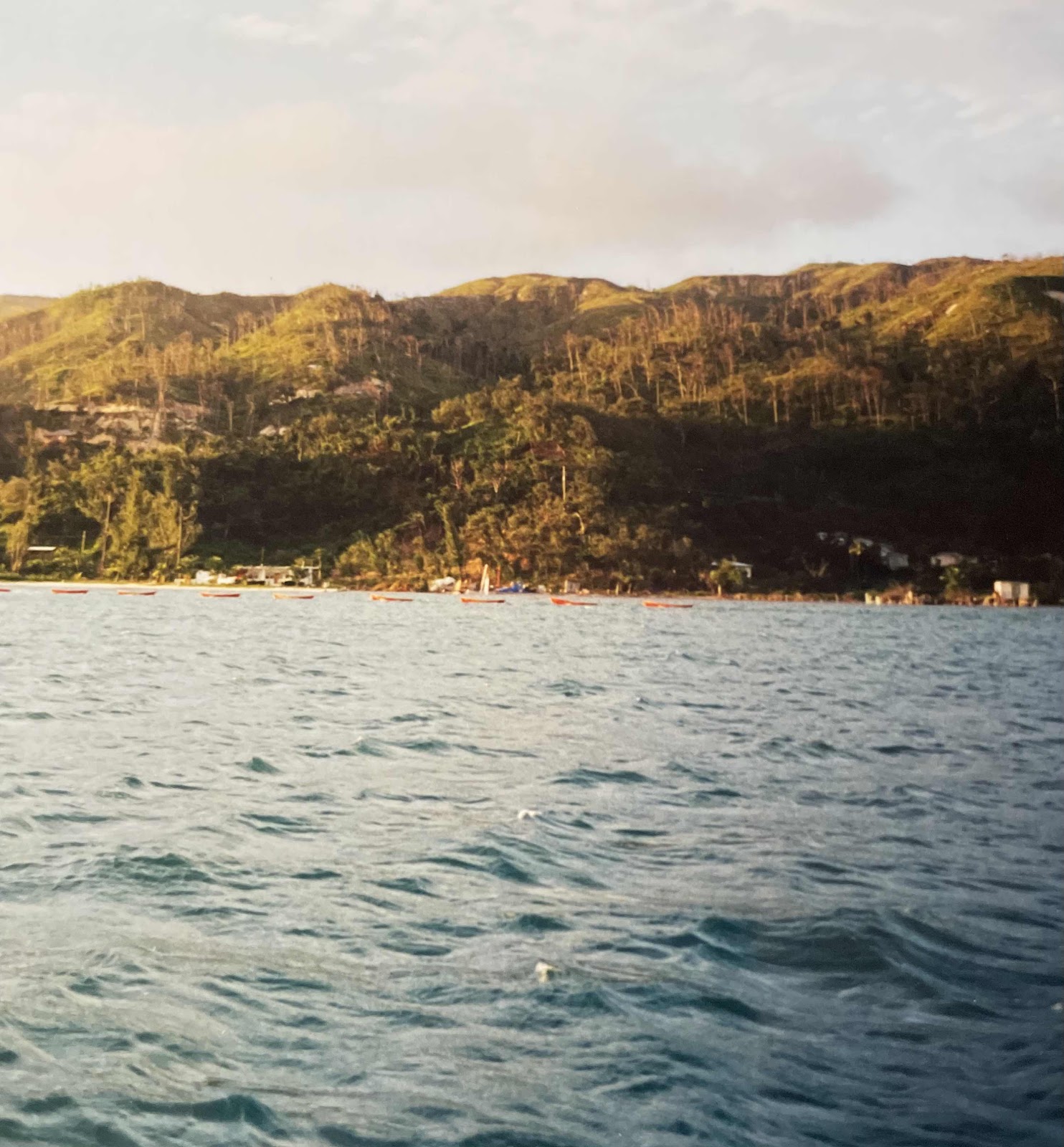 Below is how you sail into a coral pass, Kee-kimmer (you knew the crew by the name of their boat) stood in the rigging underneath his yellow quarantine flag, flown when entering a new country looking for shallow rocks and sand bars.  I ran aground once in the San Blas islands as we entered an anchorage but with an 18 inch draft the water came up to my knees when I jumped in and put my shoulder to the hull that was aground. I pushed us off the sand and swam back to the ladder to climb aboard and try again. I was 41 years old so a van in my sixties might be more sensible... 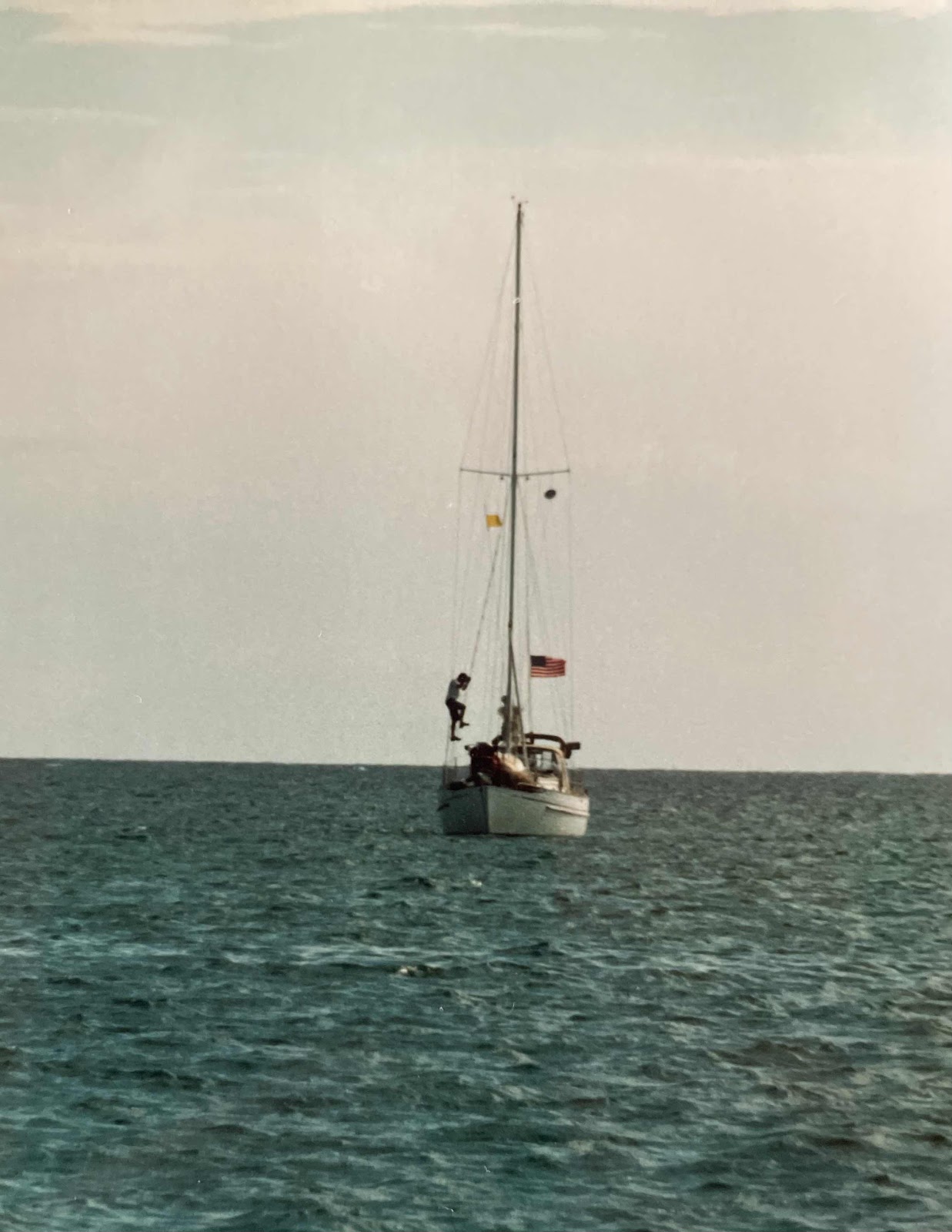 Tucked up behind Tom's catamaran in the anchorage, another round of Customs and Immigration, resenting our papers from distant Panama and a quick dog walk to acquaint ourselves with the new town, the shops and the facilities on offer. The officials spoke Spanish, the locals spoke Caribbean English, and we knew we were somewhere new. 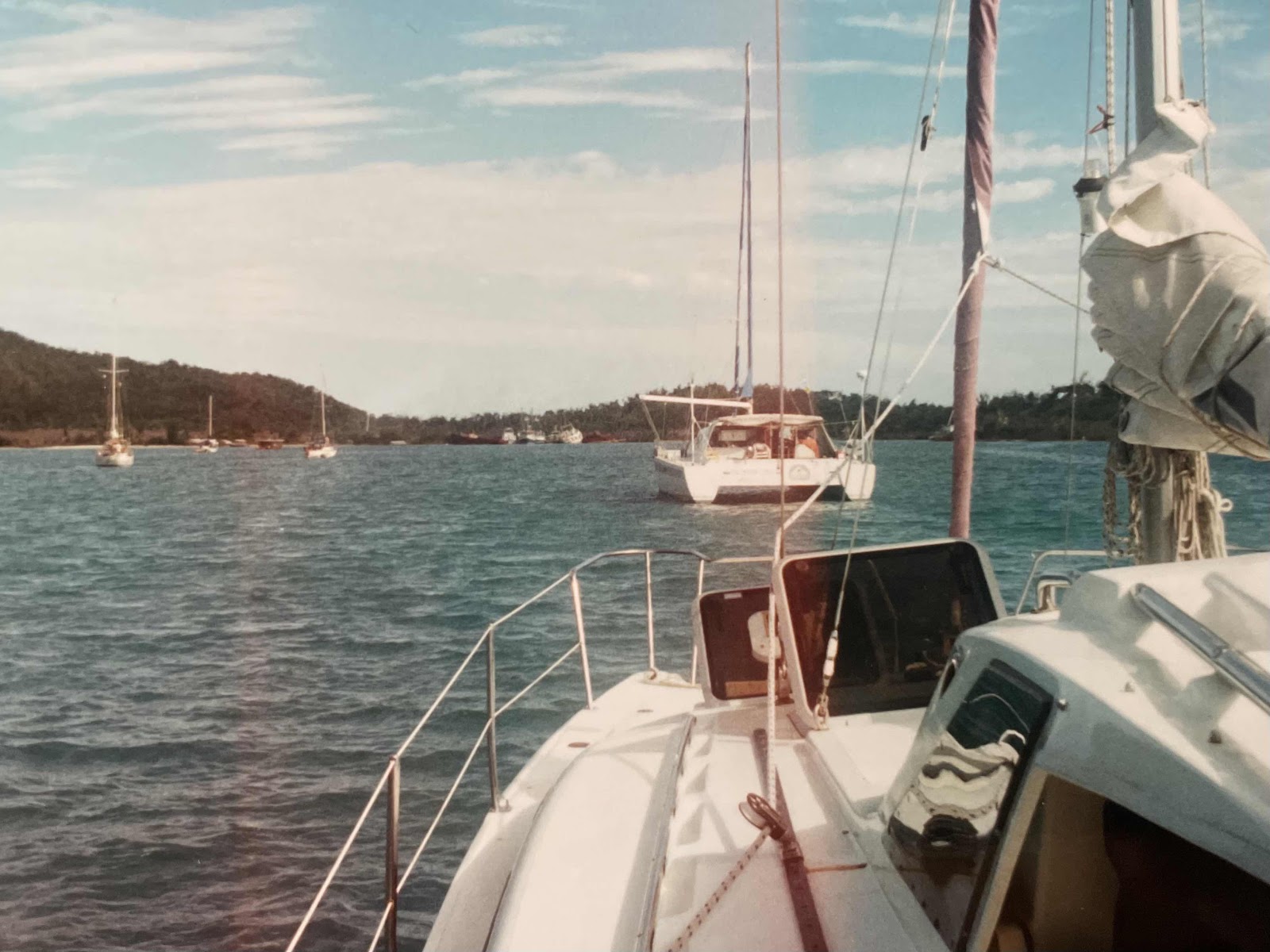 We traveled from Panama at bottom right to Bobel Cay via San Andres and then sailed off the left side of the map to the Bay Islands of Honduras. 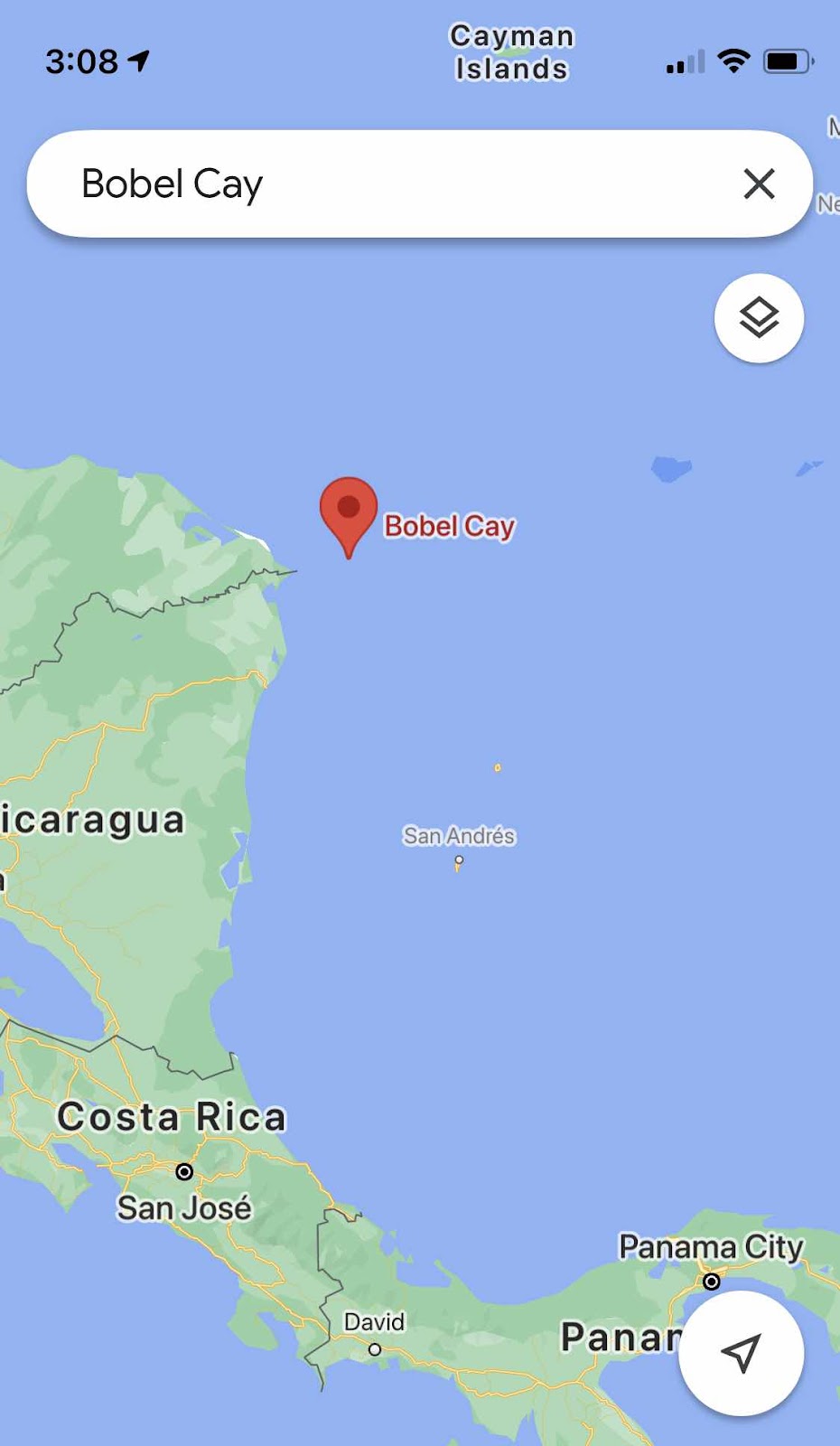 And for those of you freaked out by the notion of a government issued vaccination card, I've had one of these for my bizarre distant travels since I was 19 years old. I dug this one up as we pack up the house and I expect to add a dew more vaccinations before we head to South America. There is nothing new under the sun and nothing to fear. 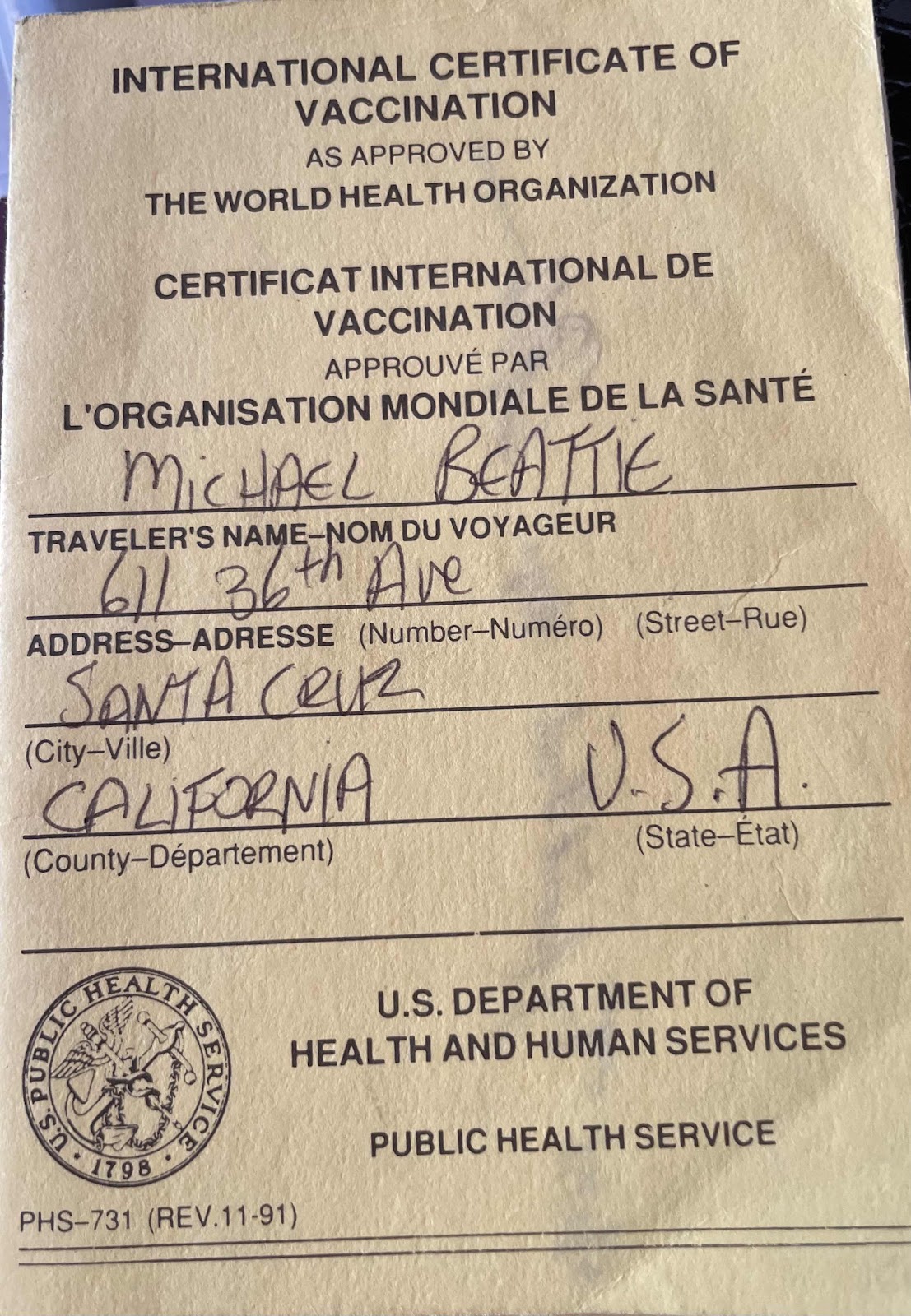