I see dogs in my neighborhood walked the same places every day and I think Rusty would do me an injury if I did that to him. We go on a circuit and some days he gets really excited especially when he hasn't been there for a while.  Some days he just doesn't want to go that way and the dog sitters in St Petersburg were surprised when he just sat down and stared at them real hard. I yield immediately. 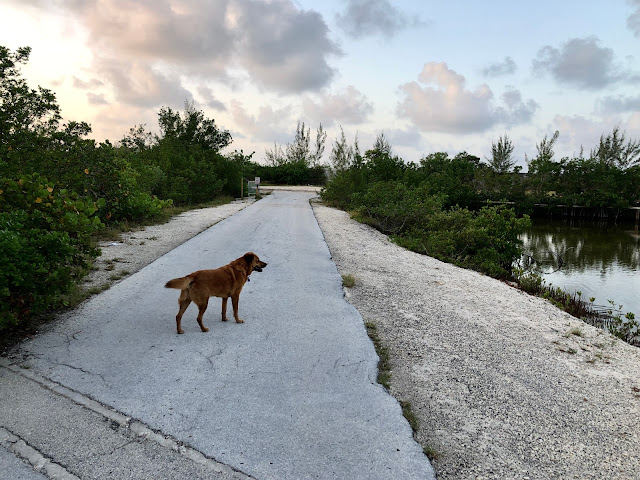 He will wait for me while I fiddle with the camera but he likes to check everything out when he is in the mood. When he's not in the mood he stalks back to the car and  sits by his  rear  door. I figure walks are his time and he gets to do what he wants. 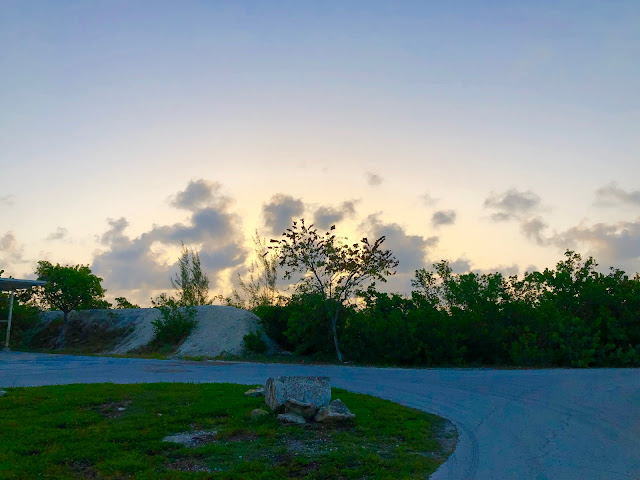 I was walking a short dead end street not far from my home and Rusty likes to walk all the way to the end, look around and then turn back and walk out. Every street is a dead end in the Keys so we do this  alot. WEll this time some dude comes out from the sole house on the street and announces he has large attack dogs and they can jump his seven foot fence. I looked at him and wondered if he's got a meth lab going in the huge warehouse with the roll up front door next to his tiny little house. He realized he was coming on a  bit strong to some dude walking on a public street and hastened to reassure me he wasn't threatening me. I shrugged. He insisted his dogs, Belgian Malinois and German Shepherds would tear Rusty apart if they jumped the fence... 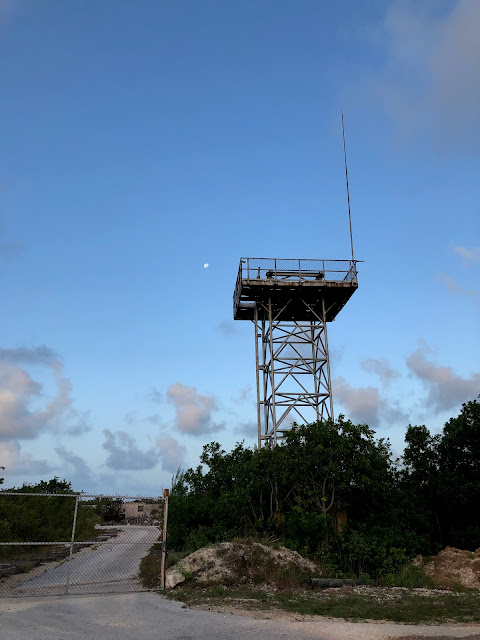 It was a profoundly weird moment as there was absolutely no sound of baying dogs behind the fence or anything. I wanted to ask where he exercised his dogs to give them the strength to leap a seven foot wooden fence but he seemed half mad so I just thought happy thoughts and wished he'd evaporate. Then he started asking me where I lived so I told him John Avery Lane and he looked taken aback. That's the other side of the highway he said staring at me as though I were a Martian, like he thought I had walked all the way or flown my magic carpet two miles across Cudjoe Key. That I might put my magical dog in a car and drive him to an interesting place to walk never occurred to the meth lab owner who I doubt walked his invisible dogs anywhere. 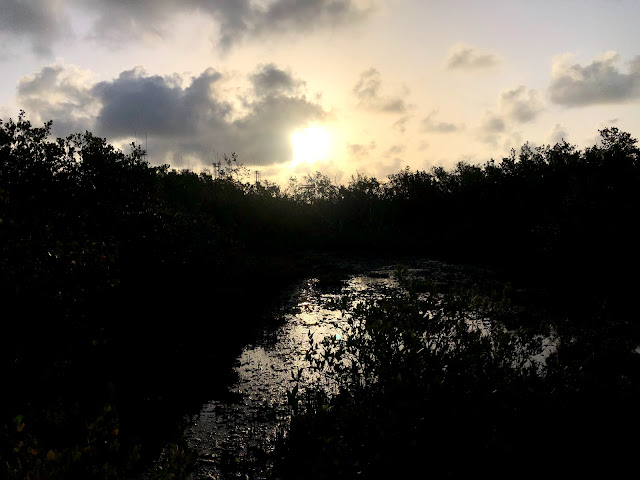 I had a moment of genius and I said I was the guy knocked off his scooter at Cutthroat Lane last August. It was a spectacular wreck I am told and my flight of the bumblebee over the car that blocked me made headlines locally. His eyes opened wide. It was pure genius I tell you. Suddenly I was the poor sap who died in the roadway, and as it was true that it was me, that was no bad thing. It's a bit like yelling at your neighbor over the fence and then feeling bad because he's in a wheelchair. Rusty's helping me exercise my legs I told him. That fact that all of this was true made his embarrassment all the sweeter. To see  such a shady character  trying to feel sorry for this interloper was pretty funny. He kept insisting his dogs would tear me to pieces as though he believed I really did want to know whatever nefarious trafficking he was up to. Not to worry I said cheerfully, I'm living on borrowed time and if it is my fate to be torn limb from limb I've already been through it once, don't you worry for me. I limped off leaving him no idea what to say. 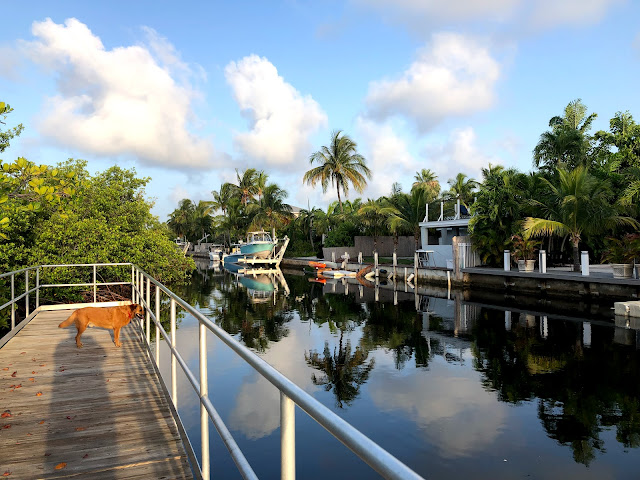 Key West has been looking particularly colorful after the recent rains and I was grateful Rusty felt like walking out to the Riviera Canal for a quick look. He doesn't usually care to cross the park for this view so the fact  we were there was a bit unusual. The only other place in Key West with private boat docks is Hilton Haven Drive on the north side of Garrison Bight. 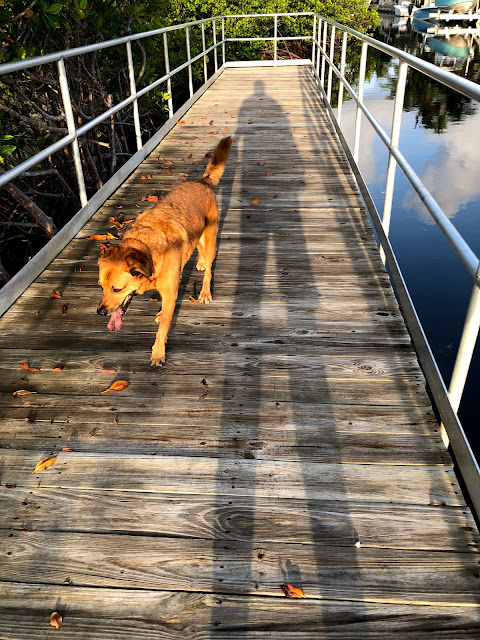 It was a lovely tropical morning and we both enjoyed it. I like walking Rusty no matter whose toes he treads on, or worse, makes me tread on. 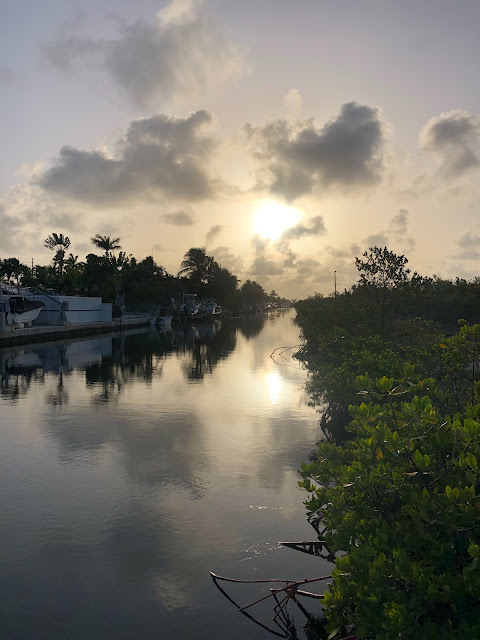 Here are a few more pictures of Rusty doing his thing: 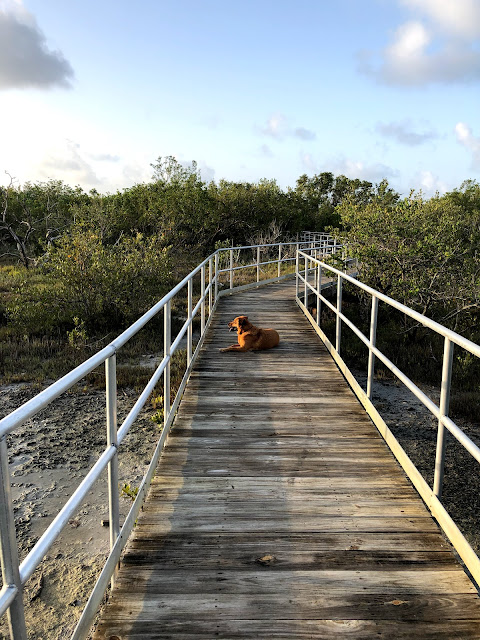 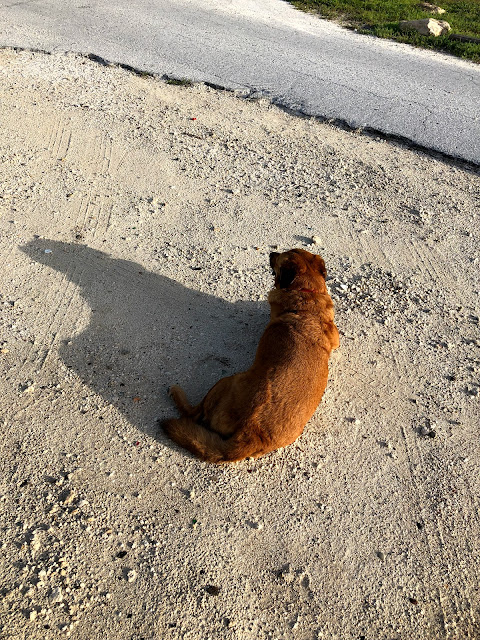 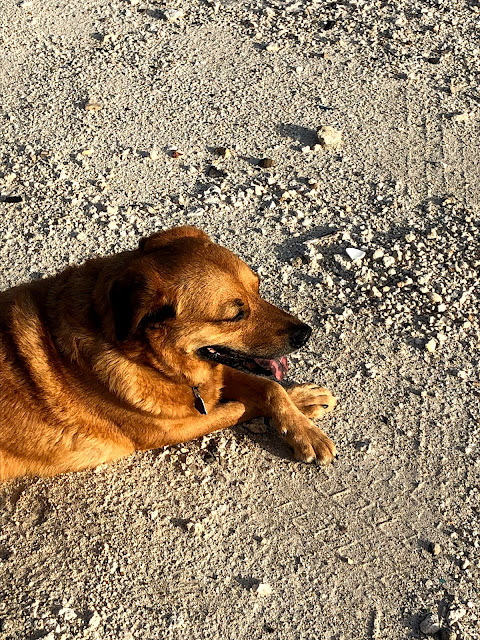 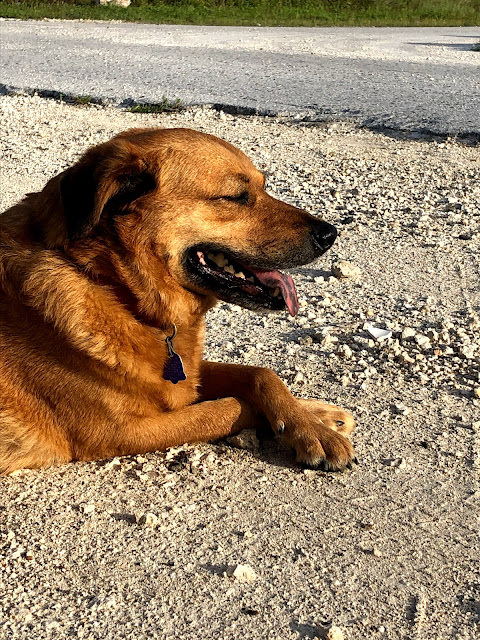