First published October 2007 I haven't been back to the island since, so I figured this might be a good time to re-run these pictures as my Internet outage has left me short of fresh material. I can hardly believe it's been 30 months, and by the way, the bridge as far as I know, is still open to the train and bicycles and pedestrians. Nothing much seems to have changed, on the ground but there was one scandal reported in the newspaper that alleged misappropriation of funds from the non profit that runs the place. 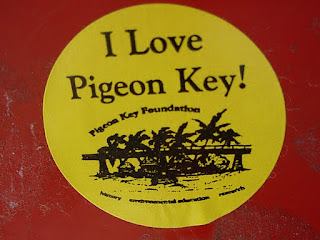 So many years have gone by and yet I have never visited Pigeon Key. Until now that is, and I am a better man for today's excursion even though it didn't involve a motorcycle. My wife did suggest taking the Vespa, which is running perfectly but it was a windy day and my wife's arthritis is acting up and blah blah blah...we took the car, which was very comfortable, thanks. 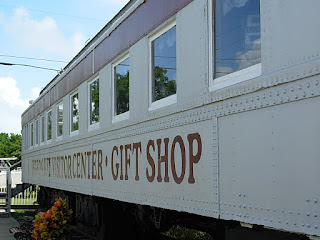 Pigeon Key was a way station as Flagler's workmen built the Oversea Railroad. Hundreds of laborers lived on the four and a half acre island while engineers sank concrete caissons to support the railroad over the water. Similar in all respects to the submerged concrete used to build its contemporary, the Panama Canal, through which we sailed in the last months of the American Administration. 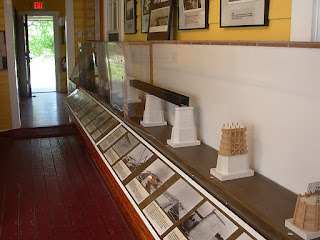 Pigeon Key sells its history and nowadays it supports itself as a non profit, as well as a place where young people can come and attend environmental camps in the old lodgings.

The day was perfect for it, breezy, sunny and not too warm, not too cold: just right! The ticket office is, naturally parked on rails, 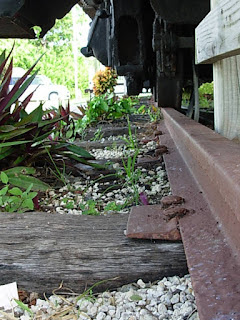 with a not too obtrusive 12 kw a/c unit underneath the non ADA compliant steps. Flagler's East Coast Railway and Key West extension is part of the state of mind that still floats through life in the Keys,untrammeled by change, at leats for the time being. 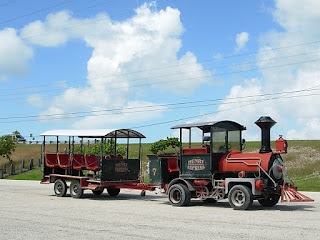 The tour costs non locals $11 and includes a ride out to the island over the old seven mile bridge. The ride reeks of cornball of course but it does get the happy visitor a splendid view of the water, a view that may soon be ended by a massive, unfunded effort to repair the railings on the bridge. Some engineers want to declare it unsafe and plans are in the works for a ferry service while the repairs are done. The estimates are in the millions so we wanted to take the ride before it is ended for who knows how log. Corny but fun! 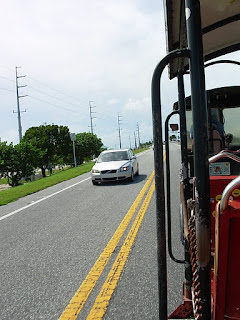 The ride starts with a quick burst on Highway One to the end of the bridge... 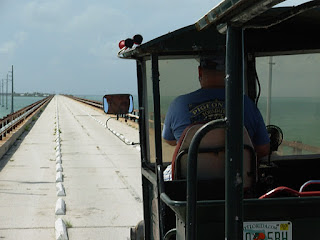 Then the little engine bounces its way across the rutted old surface of the 18-foot wide bridge. The center lane is reserved for the tour, the bumps protect the outer lanes for pedestrians and cyclists. October is a great month to be in the keys as so few people visit. We shared the tour with a terse New York couple and noticed a couple of pedestrians and a couple of cyclists taking their free exploration of Flagler's wondrous, 95 year old bridge. 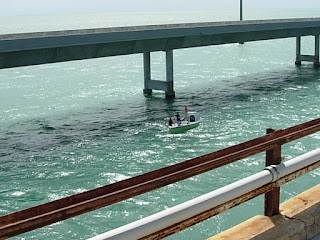 Its common practice for anglers with boats to bob around between the old and new bridges, hoping to harvest a few snappers lurking round the pilings. 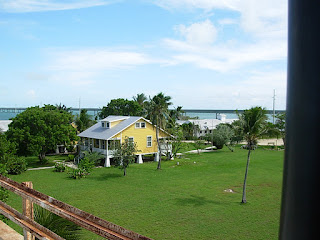 The hand rails were the old tracks used by the State of Florida when they turned the railroad into an auto road in 1938. Below the bridge lie the few buildings of Pigeon Key, in their park like ambiance. 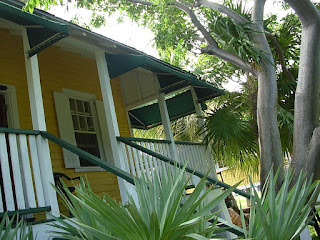 Thomas the Engine Driver gives us a few concluding remarks in the old mess house, which the cat tries to interrupt by seeking attention. 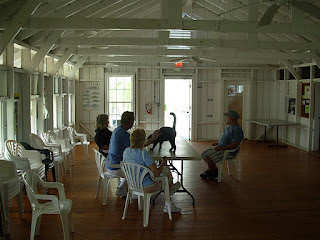 Then we repair to the inevitable 21st century communicator for a presentation that held the attention of the New Yorkers despite the absence of air conditioning. 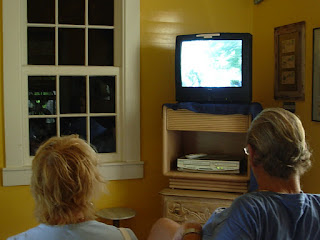 I enjoyed the old paperwork in the museum, including the passes for locals that gave free access to the bridge ($1 toll for tourists) and evocative advertising: 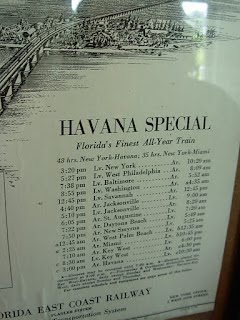 With me secretly looking forward to the day when that high speed ferry hauls me and my motorbike to Havana for a long weekend in the twisties of Cuba! 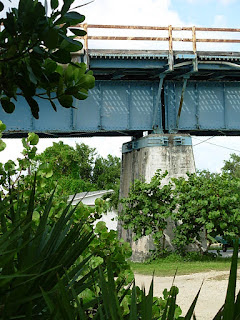 The wife and I wandered round, admiring those cement supports, sat for a while at the strategically located picnic tables even though we omitted to bring a picnic, and eventually took a walk up the ramp to the bridge, and admired the structure from above: 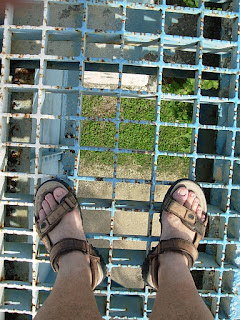 And so we started to stroll back towards Marathon. 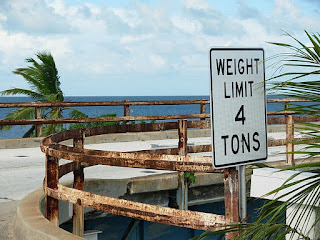 No despair though, Thomas stopped his engine and we got to ride back to civilization, 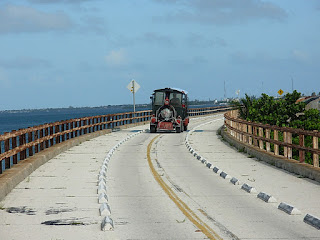 thoroughly content with our little excursion. Its a truism of life in the Keys, so little land is there, that one needs to try to take full advantage of what we do have. This trip was long overdue.

Hope the car search went well; sorry that you're having to go that route despite all the recent work that went into the old car.

Thanks for replaying this one! I like the hokey-ness of the tour and am glad that it has not been replaced by a sad "This Is the Way It Was" video installation

I was actually slightly disappointed in the post content. When I saw the title Pigeon Key, I thought I was going to learn a new way to turn on pigeons!

Just thought I would beat Jack R to the gutter content, for once.