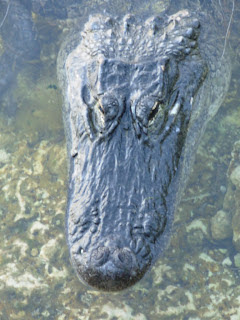 I forget sometimes how obsessed with alligators outsiders can be when it comes to Florida.There are a few things people associate with Florida, with varying degrees of revulsion. They are: 1) Hurricanes. 2)Humidity. 3) Bugs. 4)Alligators. Well you can get a pretty good slice of all four at Big Pine Keys' Blue Hole. The Blue Hole isn't blue, the one in Belize is because its out in the Caribbean Sea, this local hole is actually the product of some rock mining and it would be hard to expect a quarry to produce water of a hue comparable to the Western Caribbean; so it doesn't even try: 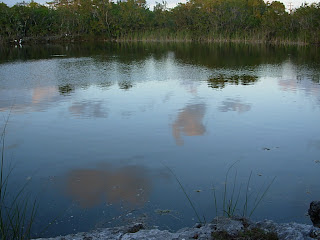 Green Hole would be more like it, if one lived in a less charitable, less visitor oriented world. But part of the expectation for the keys is blue, turquoise, azure waters, and fresh water holes must conform, in name at least. 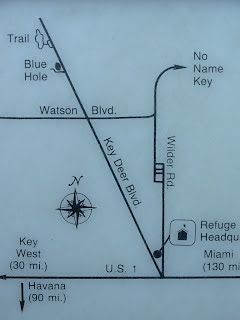 The Blue Hole gets a mention in every guide book, not because it's buggy and humid but because it has alligators, and fearsome animals they are too. 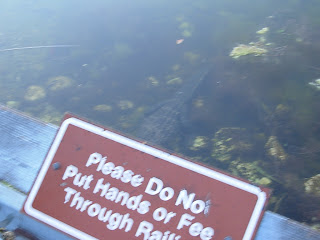 The sad fact is that like sharks, alligators are much more at risk from humans than vice-versa. A notorious court case concluded last year with two young men going to the slammer for torturing and killing an alligator they plucked from this very spot. This dinosaur was just lying there, showing but one tiny sign of life, the nostrils opening and closing rapidly as it breathed. 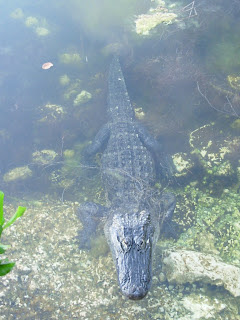 There used to be a bunch of turtles sunning themselves on the logs, and whether they ended up as alligator lunch or turtle soup, a Conch delicacy, I don't know. Perhaps they were off enjoying a less threatening area of the hole that evening. Alligators are fresh water creatures and when the Blue hole flooded out in the hurricane season of 2005 the alligators had to be rounded up from neighboring islands and dumped back in their hole. They, unlike American crocodiles, don't do well in salt water. Unlike crocodiles, alligators are more aggressive and they don't back off when humans show up. Plus they run extremely fast on land. I am cautious around them as I find them less predictable than sharks. There are thousands of alligators in the Everglades and you can canoe among them on the Myakka River near Sarasota. That is a creepy experience I shan't repeat for a while. 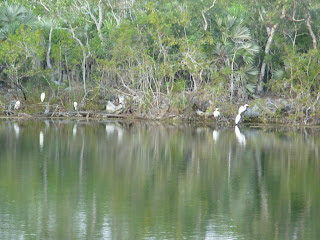 Less dramatic are the white dots across the water in an inaccessible area of the Hole. They may be herons or ibis, depending on the shape of their beaks and the color of their legs, which just goes to show I will never make the annals of the Audubon Society though one day I may bestir myself to visit the Audubon House in Key West. What I learn there I shall promptly forget I'm sure.

Like Audubon himself the Blue Hole takes a rather human-centric approach to the Great Outdoors, fencing in the visitor at every turn: 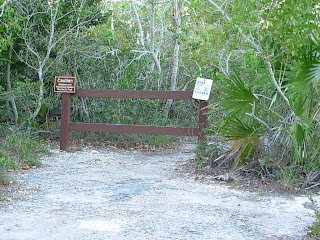 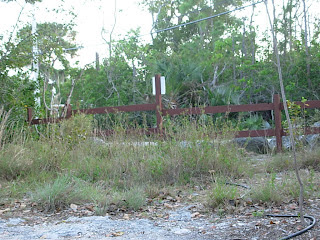 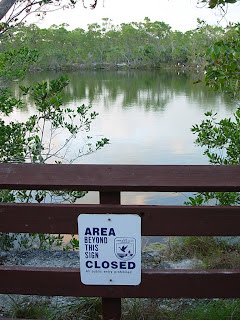 The Blue Hole is, in my estimation a modest little attraction, though it is a peaceful spot to contemplate the glories of Nature. In this one is not helped by the abundance of fencing and the absolute dearth of benches. For some reason the short paved trail round half the hole has nowhere to sit to allow for contemplation. 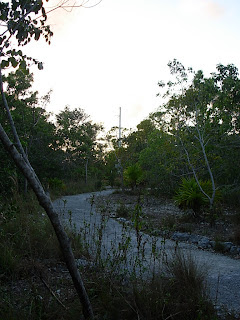 Which means visitors tend to gravitate to the observation platform and one ends up contemplating Nature rather as though one were waiting for a bus in a municipal bus shelter which tends to spoil the effect: 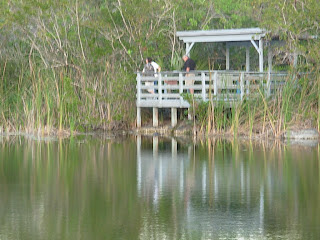 Rather than invest in benches and the adornment of relaxing vistas with seats, the Wildlife Sanctuary has decided the Blue Hole needs a more complex parking arrangement than a simple pea rock parking area: 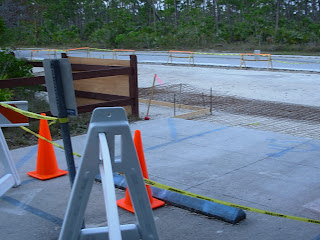 The Blue Hole has long been ADA compliant with a cement parking space and cement walkway to the observation deck for visitors in wheelchairs. Despite all this construction busyness the Blue Hole is what it is, a quiet spot just off the busy road. And even if forced to stand, one can take a moment to enjoy another splendid Keys sunset in the woods: 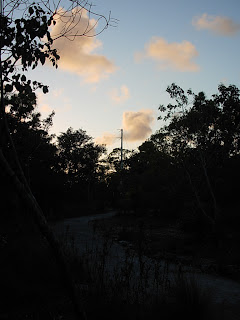 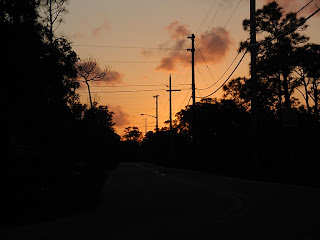 And, lest there were any doubt I paid my latest visit on my favorite form of carbon creating locomotion: 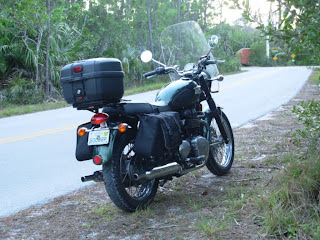 Parked rather sneakily at the back, unmarked, "entrance" to the Blue Hole. For locals who know, only, I fear.

Heaven forbid a tourist should sit quietly and contemplate. Silly boy, they're not rushing around spending money. The observation deck being like a bus stop is fitting. Please continue your spending journey, folks. Easy in, easy out, see the alligators,next stop.

Dang, how did I get so cynical?

It's catching is what it is.

You're right about the obsession with the 'gators and the hurricanes. Being a die hard OSU Buckeye fan my revulsion has increased in the past few years. :-)

One thing I enjoy is, after reading your blog, I find the places you visit with Google Earth.

The sub pens...which are an unfinished subdivision, Boca Chica, and now off to find the blue hole.

The sad fact is, that after using Google Earth a few times, you get this sinking feeling in your gut that there really is a "big brother" and there is nowhere left to hide on our ever shrinking planet. Not even with a sailboat.

No one has it worse than me. I am married to a Gator Alumni. GEEEZ!

Although, I must admit, I like Michigan alot more these days.

This is precisely why I am unable to go to bars- as soon as the conversation veers off into a language whose words I understand but whose meaning I cannot unravel I know I am in the dreaded sports zone, where everything is an indecipherable double entendre.