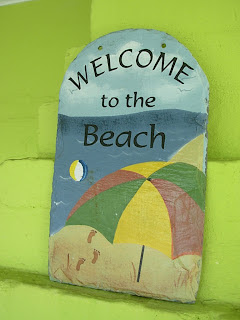 Continuing the recently inaugurated theme of Anywhere-but-Key-West Diary, I went to the mainland this past weekend to visit a friend. Denise, a Florida native, lives in a small beach house across the street from one of the less normal communities in the southern portion of the Sunshine State, the City of Briny Breezes. 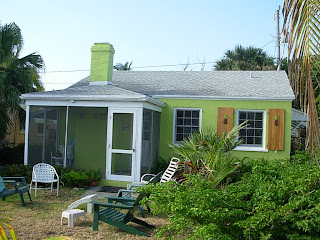 Her place, actually located on a strip of unincorporated Palm Beach County is cute enough, it's construction dating back a few decades to a happier time when this part of Florida lived in the collective memories as a winter playground only and practically vanished in summer. That was a time when the Internet didn't exist (imagine!) and people felt lucky enough to see an orange in December that they were moved to ship the fruit home to unhappy relatives shoveling snow and living on apples. Denise's little "beach house" is around a thousand square feet, 200 feet bigger than my mansion in the Keys, and it also features this thing. whatever it is: 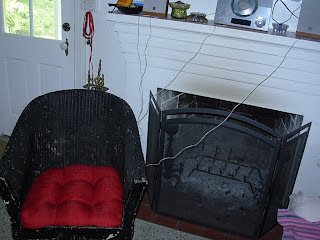 Apparently one has the capacity to burn wood inside the house for whatever reason. Denise, a teacher who grew up on this coast and has lived all her adult life in this area, has always wanted to live by the beach.A few years ago she found a deal on this house: 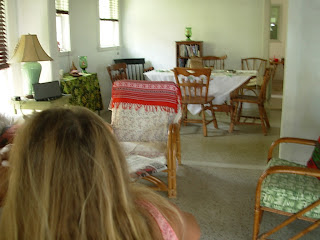 Open and airy, yet filled with knick knacks all reeking of the past which is the only era Denise relates to, her home is a shrine to the way Florida used to be, and perhaps should become again. She was born up the coast and has a passionate attachment to old Florida, a place of quiet and modest respectability, not the loud and brash and sprawling Florida as represented by the modern mauls and multi-lane highways we call streets. Tongue and groove ceilings and terrazzo floors inside, palms and lignumvitae trees outside, with the ocean nearby. Denise could be a counter culture figure from a Carl Hiassen novel: 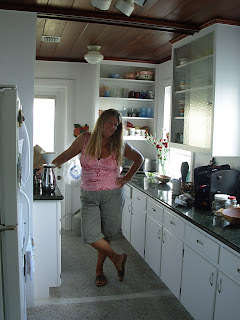 Across the street from her long sought after beach house, is another remnant of a bygone era, a remnant that Denise, an inveterate flea market browser, could not actually buy, though someone else did put a bid in recently: 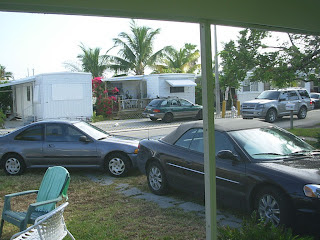 As seen from Denise's porch, behind my wife's convertible, are the neat rows of white boxes that make up the city of Briny Breezes. A developer put a $510 million offer on the entire 43-acre community. The idea was to pay all the occupants of the nearly 500 trailers in the city for their shares and then build luxury condos and hotels in their place. Most of the residents went for the deal after a lot of vocal opposition (led by Denise), but the bursting real estate bubble killed the whole project dead. 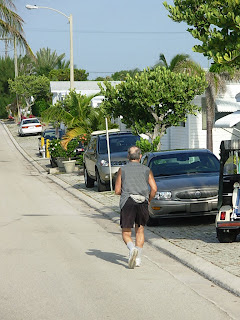 Briny Breezes was incorporated in the 1960's , a little past Denise's favorite era, but it has retained a lot of the human warmth from that fictitious time. The almost-millionaires who are still here as the summer heat builds, acknowledge strangers strolling by with cheery smiles and a greeting. They sit on their steps and drink coffee, ride around their city on golf carts and organize barbeques and shuffleboard games. It's the place where everyone knows your name. And it has what every developer wants: a fabulous beach. 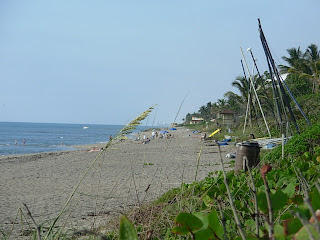 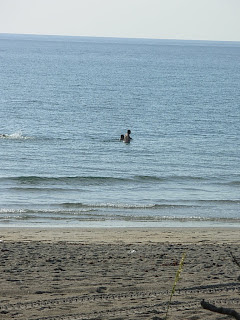 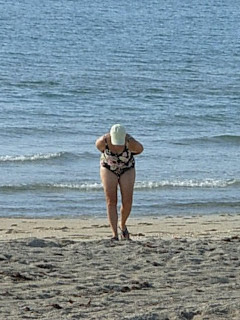 The current bust in the real estate market has kept this strip of undeveloped land open and green for the time being: It's a block of land in the county, across the street from Briny Breezes, that is slated to see a few 35 foot high condos rear up to overlook the ocean which will give Denise some adjustments to get used to, but for now...things stay as they are, a pause for breath in South Florida's eternal need to rebuild itself.

This weekend was a time to sit around and talk, to greet the passing parade of neighbors, to lean back in the Adirondack chairs and pick out the stars not obscured by the street lights, to duck onto the porch in acknowledgement of the passing summer showers. And luckily for us old farts used to our comforts, Denise has fully functional central air in her home and she was happy to crank it. I've known Denise since 1981, she introduced me to the pleasures of South Florida living as I explored the country on my Vespa searching for a place to call home, and what I most associate with her lifestyle is the sound of fans humming in a losing battle to keep at bay the heat and humidity of a South Florida summer. No longer, thanks to her surrender to air conditioning.

On the subject of nostalgia I bought a pair of top-of-the-line leather flip flops in this very store 27 years ago and I wore them all across country as I rode my Vespa the roundabout way to California (motorcycle clothing was an alien concept). Nomad is still here still selling beachwear and swimming paraphernalia. It's not normal for a small local business to survive so long in the same place: 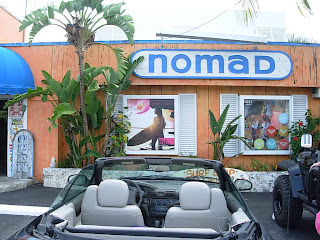 But Briny Breezes isn't normal. It has a Community Center because it is a community: 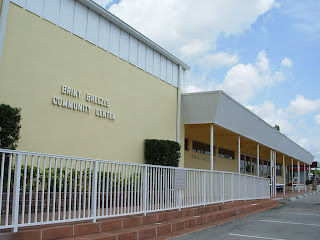 And Denise is just tickled pink by the fact that her home town has the BBC. "But," I protested,"every cable company offers the BBC." Not Briny Breezes Cable Channel 8, she chortled. 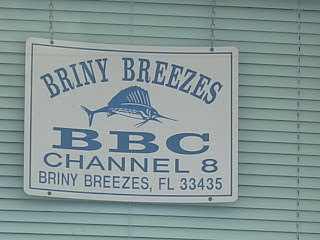 And they have a convenience store the like of which I haven't seen anyplace else. It sits on A1A, the coastal highway and looks like any dive selling overpriced milk and beer, but inside I found a haven of yuppie foods, a mixture of traditional jazz and show tunes to shop by and locally produced instant meals, hand crafted soups, Swedish meatball lunches and pasta dishes made just up the street and for sale in a store that defied convention. It looked normal enough, but this was a small store that followed it's own path: 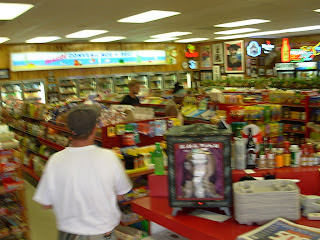 It's not Key West, but Briny Breezes sure is a community in the real sense of the word, a small town for ordinary folk wedged between the manicured mansions and condos of the wealthy snowbirds to the north and the south of its own slice of slightly scruffy beachfront. My visit to Denise's corner of Americana made even me nostalgic for something I never knew, beach town Florida, circa 1950. Those trailers peeking out on A1A: 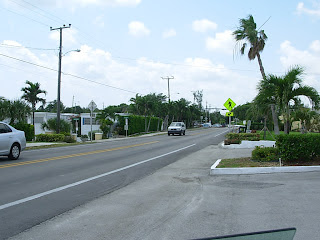 The developer is threatening to return to Briny Breezes to have another go at buying the entire town, but that doesn't seem likely at this point. For me, it was time to convert the convertible ad get back to the Keys before I start pining for my own home alongside the mouse that roared, on Florida's Atlantic shore.

Posted by Conchscooter at 2:58 AM

Howdy, me and my wife are coming to Key West next month. I just wanted to tell you that we have enjoyed reading your posts here for the last week. TJ

Thanks for sharing your words and pictures of our beloved Briny; we have only been back in MI for about a month and miss it.

Briny Breezes flying in the face of convention. Personally I think this is the time of year to be in South Florida.I'm going to Europe at the end of the month on a family visit and I shall be pining...

Please give my best to Denise she was my high school French teacher in Boca Raton. All best, Jackie

I am astonished. But I shall.