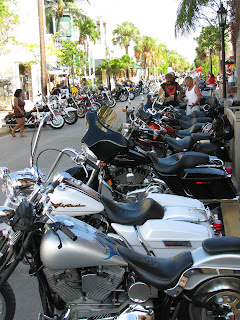 You'd think, if you didn't know any better, that a dude like me, what rides his motorcycle most days of the week, would be delighted to welcome a few hundred fellow enthusiasts to a weekend's revelry in the Southernmost City. Well, now you know better. 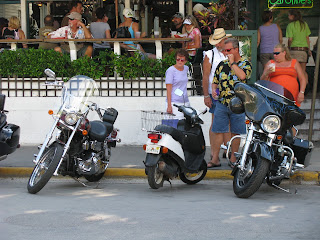 Bike Week is good for the merchants and it's been a tough year so they have my sympathy and I hope they wring this lot for every penny. It's just that I'm not a really clubby kind of guy and standing around with a bunch of men admiring yet another air cooled V-twin while puffing on a cigar just isn't my cup of pansy-parallel-twin cup of tea. They close off the one, two and three hundred blocks of Duval and let the motorcycles have at it. Very cool: 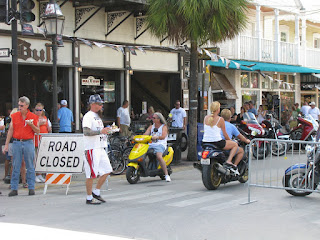 And yes, there were a few non-Harley Davidsons in the crowd, including a half dozen BMWs: 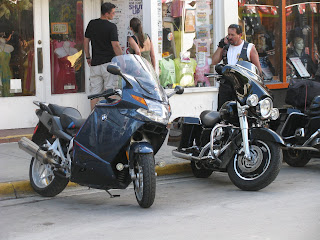 A few of Erik Buell's Harley-based V-twins including this dude in High Visibility clothing. Like he doesn't think people are on the look out for motorcycles during Bike Week? Perhaps he was wearing a Kevlar baseball cap with invisible chin strap to be really "safe:" 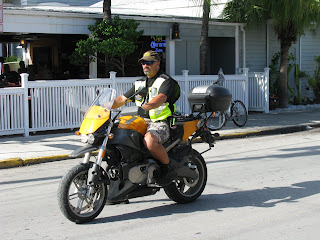 This thing that was labelled a "Kicker" though it looked a bit like an Aermacchi four stroke flat single to me, in rat bike form: 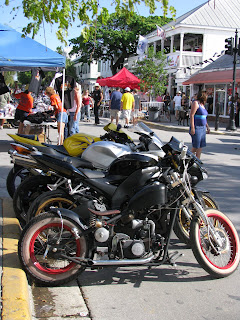 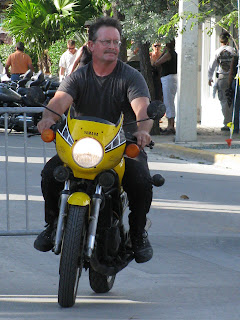 Or a lovely old Honda Four burdened with a gruesome seat. Imagine, I used to wonder how anyone could ride a 750cc "Superbike" as powerful as this: 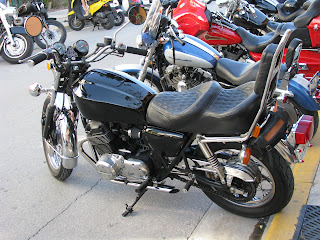 Nowadays I wonder how people get around looking like this, exposing their armpits and everything: 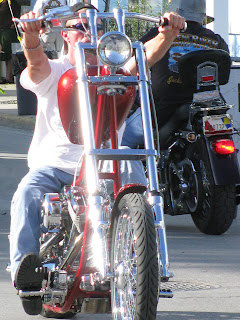 When this brute was fired up it rumbled out into the street with the radio blaring. All the comforts of home. I had a motorcycle once that had a radio and I thought it was weird. I still do: 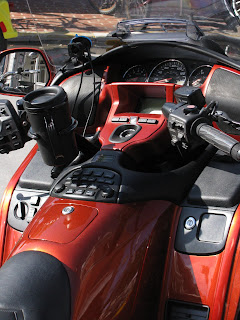 At least a Gold wing isn't a Harley. It's not that I don't like Harleys it's just that there are other motorcycles in the known universe and it would be nice once in a while to be exposed to something slightly different on the streets of the Southernmost City. This would be more my style than the Gold Wing, if I lived where the horsepower were usable: 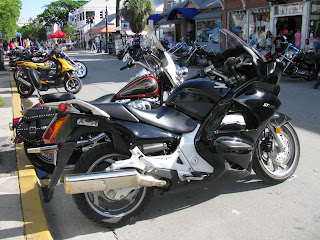 Magnificent eh? Not good enough for Irondad apparently, who after a modest 160,000 miles with an earlier model of the Honda ST (sport tourer) decided to ditch the brand and go with the Yamaha instead. Fickle, that's what I call it. Triumphs? Well, there was one on Duval Street briefly: 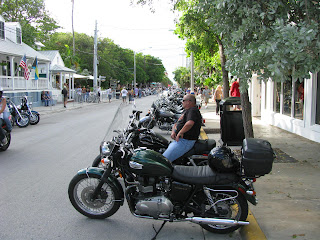 "Hey," I said to the guy on the Harley."If anyone asks, tell them there was at least one Triumph at bike week!" He cackled appreciatively so at least he seemed to know what a Triumph was... The motor unit was there riding...Harleys of course. At work I once suggested Vespas might be more suitable for Key West traffic and they nearly lynched me. They do like their Harleys: 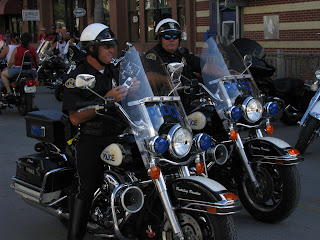 And there were babes too, in various guises: 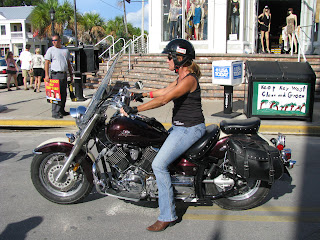 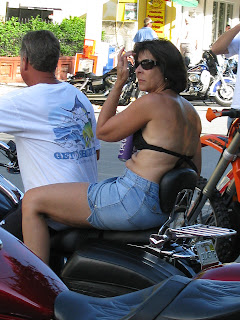 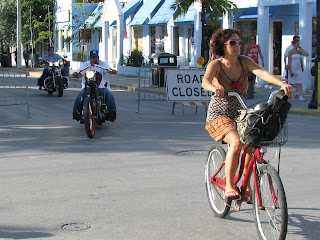 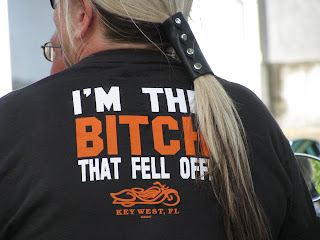 And there were blokes standing around, doing what the weaker sex do best, clutching drinks and trying to look knowledgeable: 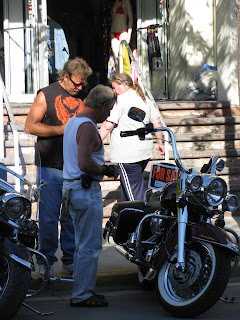 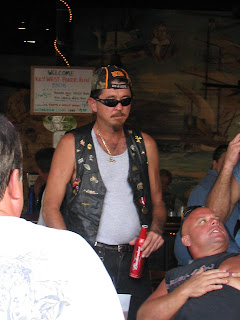 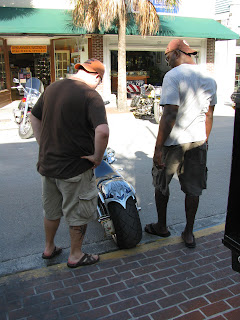 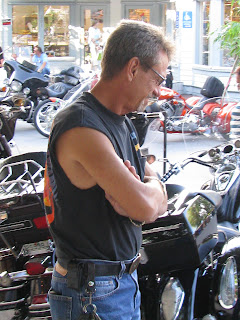 This next one looks like he's cursing his machine (an uncomfortable custom Harley) but he wasn't, he was simply adjusting his protective headgear: 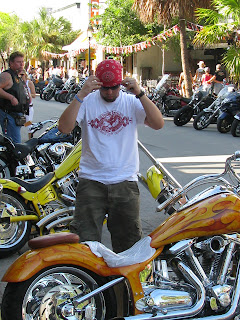 But I did see one full face helmet other than mine: 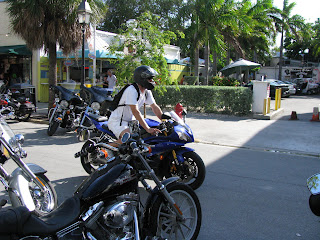 Everyone else was riding Florida style including more than just this one with his feet down like training wheels which is a concept I find so profoundly wrong I can hardly express the depth of my feelings: 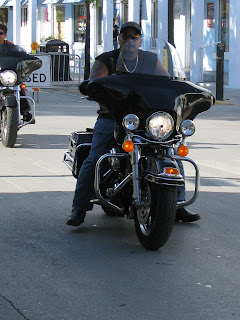 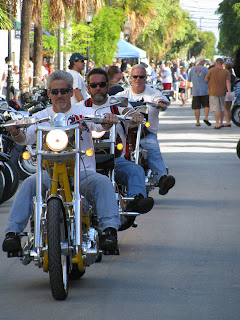 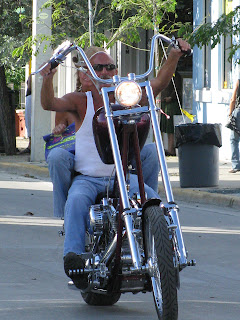 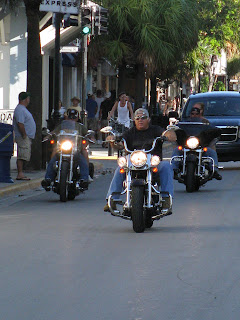 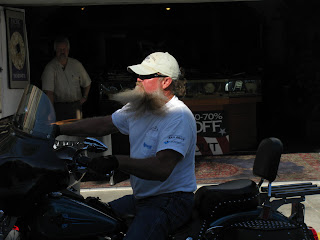 And so it was, I had my fill of leather vests, rumbling twins, spilled beer and hail-fellow-well-met camaraderie. I took my Bonneville and threaded my way home through herds of more Harleys and yet more Harleys and their weekend riders: 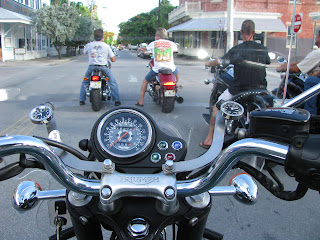 I made sure before I left not to look too closely at the Road King with the For Sale sign on it. Did I ever mention the Road King is my favorite Harley design? Probably just as well I never did.
Posted by Conchscooter at 12:09 AM

Bet that is one loud rowdy week. Hopefully it will be over soon.

whoa! I could not stand that. Your comments seemed pretty spot on for most of these gatherings and that is why I avoid them. Men do love to gaze at motorcycles, and I get some idea what women must have to put up with. Yesterday my bike was parked in town and I returned to find a middle aged guy in full HD regalia standing in the street just staring at it. And staring some more. After the cursory "nice bike" he just said nothing and continued to stare even though I tried to engage him in some conversation. He kept up his stance and meditative gaze as I started up the Triumph and rode away. I think my ff helmet and ce armor plated red and white jacket may have put him off.

DH and I ended up at Myrtle Beach once during Bike Weekend - the constant noise was more than I could tolerate....thanks for all the Duval Street pictures...

Ah, one of my favorite rants.

HD and custom bikes that are WAY LOUD.

I have a T-Shirt that reads, "If your bike is too loud, you may have small genitalia". I wear it to an establishment that caters to a Bike Night every Tuesday night near my home for reactions.

However, on the loudness of bikes, I have heard the argument people don't see you otherwise (which is true). So much that the San Diego PD removed their baffles because they were getting run off the road (I need to fully verify that tidbit).

BTW, what is the purpose of "ape hangers" handle bars?

If it were a "Bonneville Only" convention, Conch would be "that guy" no doubt! Hey wait...it could be billed as BYOB (Bring your own Bonne...well..you all get it)... And I can attest to the fact that several agencies (not sure specifically about San Diego) have removed thier baffles in accordance to the old "loud pipes save lives" adage... and it seems the ape hangers would indeed get awfully tiresome after a while, but when you're cruising 3 or 4 closed off blocks of Duval after having trailered your bike, I guess it doesn't really much matter...

Personally I think loud pipes don't save anything. They point backwards alerting the poor sod behind you that he'll need a hearing test. What saves biker's life is luck and paying attention. Besides if it were an all Bonneville convention I'd be the contrarian with a Harley!
Interesting side note this year no complaints- yet- in the citizen's voice. I think everyone appreciates the money. And Kyle may be forming in the caribbean so it's a good time to make money off Bike week, before the cruise ships have to stay away again.Maybe. Times are tough.

Great post. They actually close Duval much farther up than the 300 block, going all the way past Fleming this year.

The guy in the safety vest is a professional filmmaker and had just gotten back from filming the ride down US 1, so the vest was a smart move.

And I was one of the BMWs on the street. I don't do Harleys, but this is my favorite weekend of the year.

Loud pipes do not save lives. Loud pipes annoy neighbors and make them detest bike owners.

Were there no BSRs in the crowd? Perhaps several started out on the trip but never made it and had to be shipped home on a bus :)

Yea...them Roadkings are nice aren't they? They look really good in a darker red color too :)

I appreciate the loud motorcycles. People are more likely to complain about them instead of the Navy jets flying overhead. As for Bike Week here, I usually leave mine parked at my home on Ramrod. Miami bikers seem to have a different perspective to riding safely and peacefully than others who live and ride here on a daily basis.

Ihad a fascinating time riding in to work watching them tailgate, pass on corners on double yellow lines, weaving in and out and so on. How there was but one fatality and one air lift this weekend I don't know.