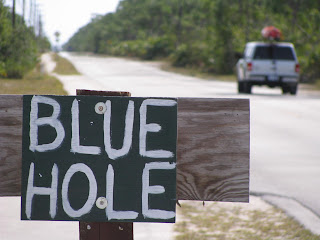 This is my first return visit to the Blue Hole on Big Pine Key,since I was there earlier this year, a time when there was an alligator lurking in the water. Since then the animal which was either seven feet long and had lived there nine years or was nine feet long and had lived there seven years has expired thanks to ingesting a child's toy dropped in the water. Apparently the animal, named Bacardi for some obscure reason, was unable to digest the toy and got terminal stomach ache. Thus no alligator pictures this time except for this: 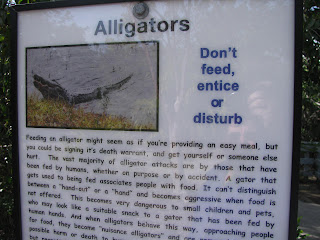 The last time I was here there were signs of construction and things getting torn up and now the parking area is all spiffed up with cement and bike racks and everything, even some slight shade. Shade is the definition of a good parking spot in Florida, and in winter you just seek out shade from force of habit: 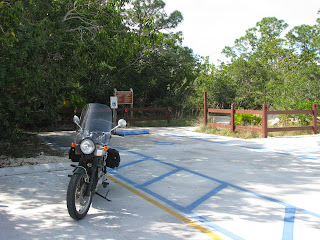 They've cleaned up the paths and the area is entirely accessible now: 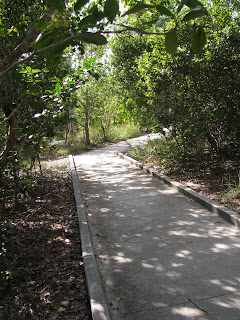 With the requisite warnings of course. Signage is everywhere: 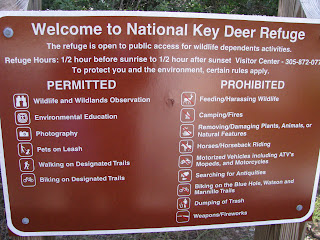 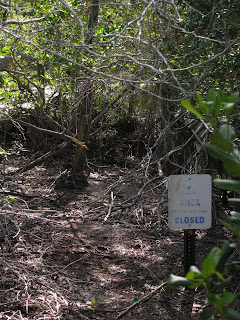 The Blue Hole is a disused quarry filled with freshwater and thus ideal alligator habitat, which makes it a shame there is no alligator anymore but people kept showing up to have a look. 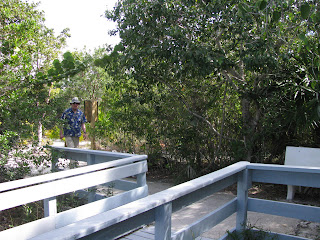 I met one guy at the viewing area and I remarked on the missing Bacardi (I can't get over what a silly name that is for a dinosaur but none of my acquaintances agreed when I ran it by them) and he sounded rather like a Blue Hole volunteer or something when he expounded that "they" had found 75 freshwater holes on Big Pine and No Name Keys which were likely habitats for alligators. That gave me, the back country explorer self styled, pause. Then I wondered if they might import a couple back to the Blue Hole and he sucked air through his teeth in disapproval. 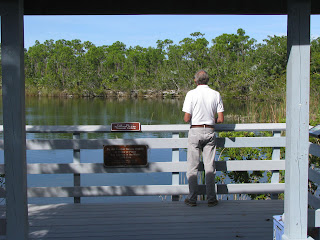 Apparently it is no longer the done thing to mess around the wildlife and they are simply going to hope that perhaps an alligator might migrate back to the hole on its own, like a lost hitch hiker or something: 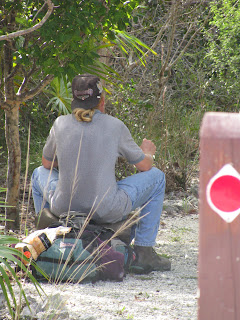 I saw this dude strolling up Key Deer Boulevard from"downtown" Big Pine Key and I wondered where he was headed as there are only a few scattered housing subdivisions out in these parts. Then I saw him taking a pause that refreshes at the Blue Hole.Perhaps he was hoping for an alligator to liven up his day. It's hard to be disappointed when you are in a pretty little spot like this: 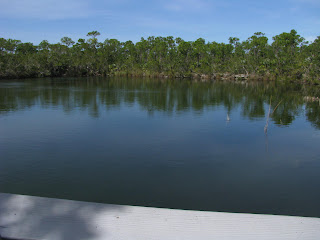 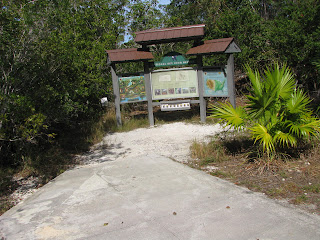 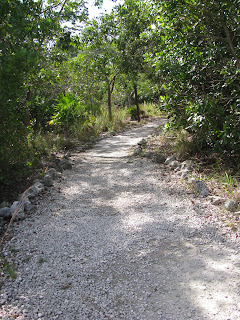 I think they've done a nice job of cleaning the place up. clearing the trails, painting the post-and-rails and putting up all the usual verbiage, without making the experience too suburban. It's worth a visit and to get here take the left hand street from the light at Highway One in Big Pine. The left-hand street is Key Deer Boulevard,straight as an arrow: 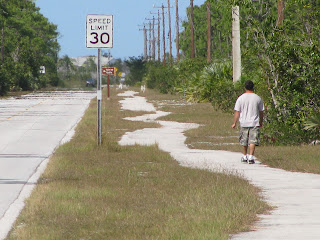 The back roads around the Blue Hole are pretty much straight too: 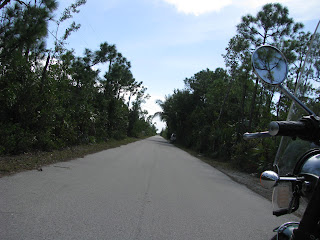 So it is eighty degrees but the roads are straight. Take your pick if your motorcycle is weatherised for winter. Puerto Rico has interesting roads but you need Spanish to make it there, and road trips are perforce short as the island is a hundred miles long. The Florida Keys are an excellent compromise.

Interesting. I had heard the alligator at the blue hole was poached. Interesting about the toy. Big Pine is an interesting place if you want to hide. I remember riding my bike there on some back road, coming across a couple on horse back. I kept thinking, where do they stable these giant animals.

Bacardi may be gone, but I can assure you than an alligator lives in the Blue Hole to this day. I've seen and photographed the fella as recently as last weekend. Doesn't seem to make as many appearances as Bacardi did though.

It gives one a shiver down the spine to think about this creatures dragging us off to dinner, but like sharks alligators have more to fear from us than vice versa. Two young men went to trial for torturing and killing the other gator and were found guilty... I'm glad to hear another one is there but I didn't really look too hard. I kind of stood there thinking about the fact there wasn't one, and left it at that.Next time I shall look harder.

We had an incident on Sanibel Island 2 years ago where a lady was grabbed by a large bull gator while she was gardening. Out of blue during the dry season, it came up looking for food.

It dragged her into a pond. She ended up passing away not from the bite itself, but from the dirty water getting into the wound. Sad.

Be careful is all and notice your surroundings. Conchscooter is right, they will tend to leave you alone though.

I hate it when I see people feeding them in the canals here in Cape Coral. Not only is it illegal, but the animals begin to expect it. Then when someone's dog or cat disappears (or worse like the woman above), people cry afoul and a new pair of boots is made.

Motorcycling is about managing risk. So at the risk of appearing stupid, a chance I often take whenever I write, how do alligators manage to infest the keys, when they are 90 miles out at sea, or something like that?

And if one gets poached, fried, or otherwise removed, how do others find their way to the keys and locate these remote spots.

Finally, my mother-in-law likes to garden. What are the odds of an alligator finding its way to Ridgefield Park, New Jersey?

Jeffrey's right. Last year two people were plucked from the banks of canals in Dade county and drowned by the gators. Weird but true. Gators and crocs can't chew so they drown their victims and stick them in a hole until they decompose and they can swallow the pieces whole, so feeding them is the worst idea you can have, as it encourages them to come look for you.
Gators need fresh water and apparently they come down from the Everglades (only 30 miles north of Marathon) and survive if they find fresh water to live in. I saw a gator on my street after Wilma washed it out of wherever it was living, but we don't have a resident population (I think!). Salwater crocs are much more shy and endangered and they reputedly live in some areas of the upper Keys though there are said to be but 500 left.One showed up in Key West a while back and had to be transported back to the upper keys. Crocs have narrower snouts which may be a consolation when they nab you. Or not.

I thought it was an American Croc that was taken and tortured by those young men?

From Citrus County (where, thank goodness, it has finally returned to normal 80 degree temps)

The gator was named Bacardi because he was tagged with the number 151 !