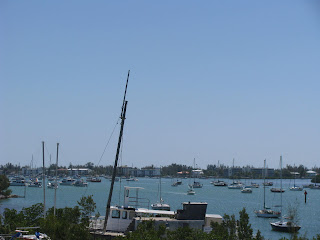 Spring Break sucks. It's nice for my wife to get a week off and truth be told I enjoyed a week off from class at the college, but I'm ready for summer. I want the snowbirds gone, I want students back in school for a few more weeks, I want peace and quiet to reign on the Overseas Highway. Had things gone my way this essay would have been about Long Key State Park which I have had a growing hanker to visit. As it was I got as far as Marathon, 23 miles (35km) north of my house and I threw in the towel. Enough I said to myself and I pulled off the Highway. There was just too much traffic and I decided to spend my travel time taking pictures instead. So I went to Boot Key harbor, a place I have stayed on my sailboat from time to time and to which I like to return from time to time. This wasn't my sailboat though it looked just like it, one boat among hundreds in the mooring field: 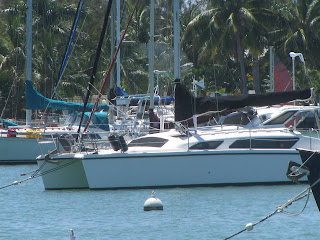 I am told my trusty catamaran is rotting gently on it's Key West mooring having got away from it's new owners too busy to care for it. There are lots of boats at anchor in Boot Key and on city owned moorings for which there is a fee, somewhere around $300 a month. And lots of different boats enjoy the perfect protection of this lagoon,surrounded on all sides by dry land: 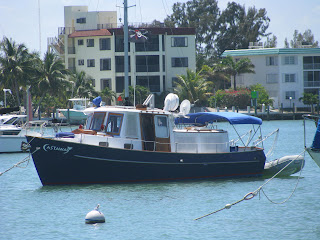 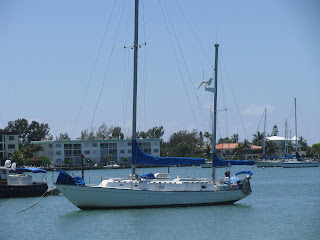 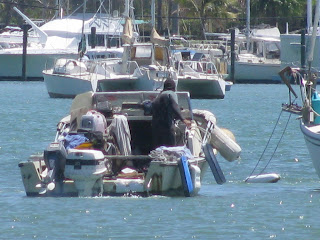 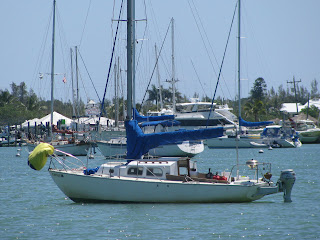 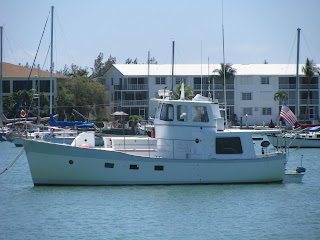 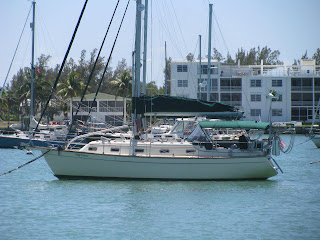 The city marina in Boot Key Harbor though hard to find, is located at the southern end of the city, and the entrance is through the Community Park which is marked by a little lighthouse on the Overseas Highway. The marina itself is a converted warehouse offering boaters all the facilities... 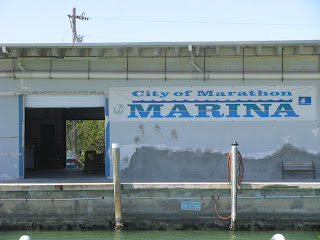 ...including segregated dinghy docks, one for hard dinghies: 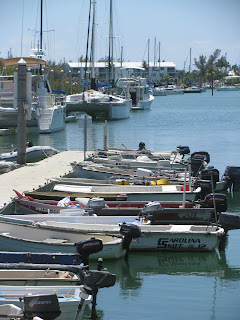 The other is for inflatable dinghies, the theory being that one lot won't damage the other: 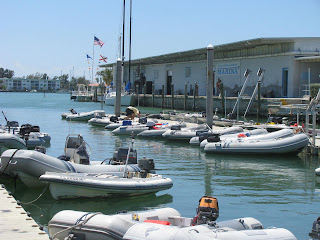 Boot Key harbor is an absolute hot bed of dinghy activity with people coming and going all the time: 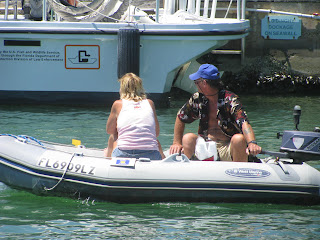 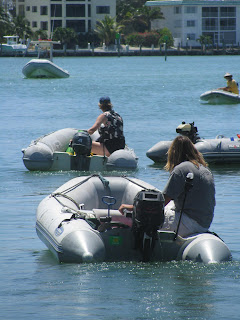 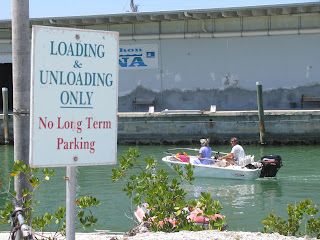 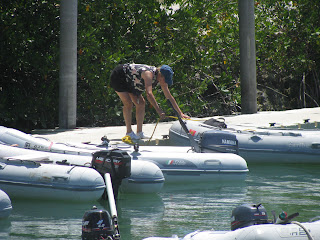 And I did manage to catch one dude rowing his hard dinghy back to the dock. A long waterline helps the boat slip through the water further on each stroke and this dude was gently pukling his way to the dock. It's easier to row in Boot Key than Key West owing to the totally protected nature of the harbor, which doesn't allow large waves to form. But there he was nevertheless stroking away, the consummate old timer: 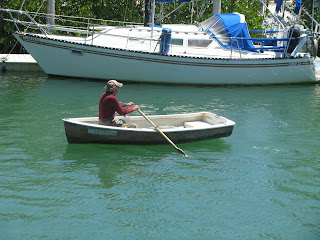 You'll notice in some of the pictures that there are boats lined up at the seawall and that's because the City of Marathon charges boats to tie up, and for some people it's worth it not to have to use the dinghy. They also get to plug into shore power (120 volt electricity) which allows them to run air conditioning, which they need as there is less breeze at the dock...or they can use power tools, on their knees naturally: 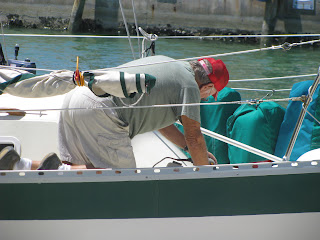 The main marina building offers lots of facilities, Internet access, laundry, a book swap and lockers and a space to use as a workshop. It's a club house for boaters: 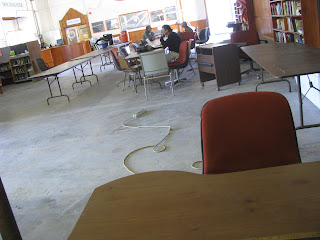 And let's not forget the all important pump out boat that cruises the harbor and, for a fee, sucks up and carts away your tank full of effluent from your toilet. There are boaters who prefer to dump it for free and illegally which is why many people don't want to swim in the constricted tidal waters of Boot Key Harbor: 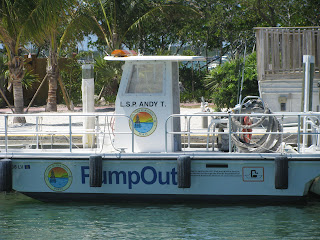 The view in Boot Key Harbor is nothing to write home about thanks to the high rises that sometimes make this land bound place look as though it belongs among the condos that crowd the east coast of Florida: 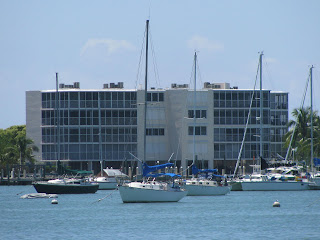 But life on the water is still very pleasant, especially before the anvil heat and humidity of summer and before the arrival of the first hurricane scare. Storms wreak havoc on boats at anchor. Some people stay on their boats during hurricanes which to me is not foolhardy- it's the height of stupidity. A colleague of mine was found drowned in his boat after one of the 2005 storms that side swiped Key West. Jerry chose not to evacuate to his mother's condo and drowned, trapped in his half sunk sailboat. Still, on a less tragic note, modern life is miniaturized enough that one doesn't have to be deprived living on a boat. Modern communications prevail: 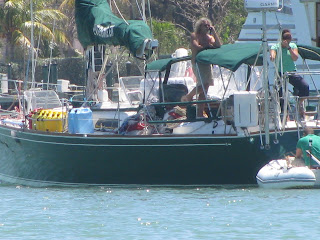 And sometimes people actually get to raise sails, whether to simply dry them out or to take off one can't always tell: 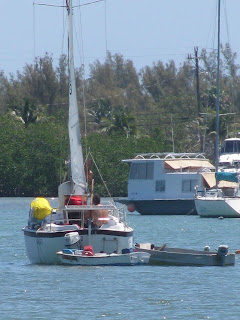 Ashore all those dinghy travelers need to get into town, so some use bicycles: 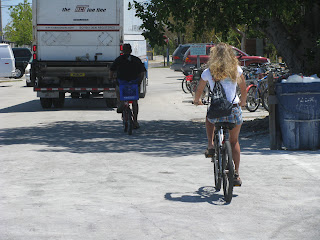 Others leave their motorcycles more or less covered for a stationary summer in the ample parking lot. Waste of a good BMW GS if you ask me: 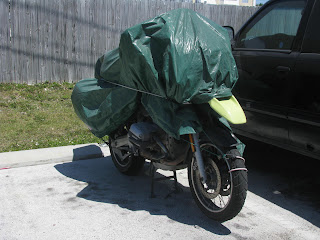 While using a Sportster as a washing line might seem sacrilegious: 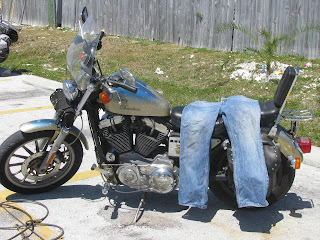 Behind my vital and alive Bonneville there was a Gold Wing rotting away, alongside a very elderly chain driven Harley and something shrouded in mystery: 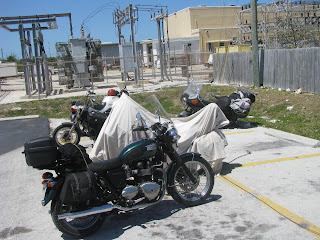 In the back you'll notice the not so attractive electrical sub-station where the wires take off for their final trek south taking juice to Key West. 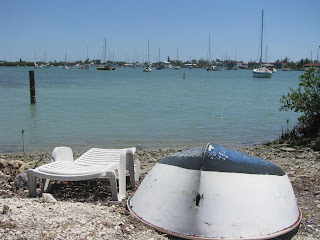 And we end with one last view of Boot Key Harbor from the parking lot at the far end of the marina.
Posted by Conchscooter at 12:01 AM

Was it the water rat in the "Wind In The Willows" who said, "There is nothing like messing around in boats?" I see a bit of ratty in you.

I am often compared to "Toad" in that book, due to my courageous and reticent nature. Nice pictures. When does the body painting season begin in Key West. I have some skill at painting by the numbers and I was thnking of plying my trade at the height of the season.

I was thinking to myself about something the I always wanted to know about the history of Loop Road, down the street on Sugarloaf. A photo essay and some history would make for some interesting reading.

Looks like an active place just humming with activity, of course with "free" rent what do you expect. A little congestion is the price you have to pay to live in Paradise. If you want solitude, why don't your lug that Bonnie to somewhere, such as, Arizona, Montana or Utah . . . wide open spaces, few people and lots of twisties to lean into and wear out some of those sidewalls.

Dear Conch Scooter....can you tell us all the places truly welcoming dogs on leads...restaurants, stores, beaches. ...for Key West area...loving your blog and hoping to live it within the year.
P.S. Jack...do you have a dog? :)

The essay about live-aboards in Marathon. Thanks. Further insight. Very, Bohemian. This where your old Catamaran is decaying away for the new owners?

A great place to enjoy the view of the Harbor is on Burdine's Bar & Grill deck at happy hour.I don't remember the huge condo...when did that pop up?

Ok, I'll bite and ask the obvious question. Actually, I'd rather write something off color but I have to fight the affect from hanging around Mr. Riepe.

Why "Boot Key"? Is is the shape of the island? Or is there a more colorful story?

Good grief people. So many questions. The used-to-be-mine boat is on a mooring in key west and I know it is mouldy because some prospective buyers hunted me down and told me so. I have no idea why Boot Key is so named. I had sidestepped that piece of hisotry until irondad kicked me in the goolies. No comment to Jack Riepe except body painting is before fantasy fest ( late october). A colleague has a grayhound and they are nice dogs but I am not ready for mor eodg ownership. I am very fond of Burdines (check the "search" function fo an essay on the place). The condo is elderly 1950s or 60s viontage I think, on the edge of the sisters channel to the south entrance to boot key harbor. And bobscoot when I want to wear out my tires in unnatural places it will be your doorstep I shall be upon to cause you unhappiness and plagues. Sod Arizona.

Ps dog essay? hmm maybe. I shall look around and think about it. Generally speaking renting with a dog limits your chances and choices and is a strike against you though not impossible. Resturants with outside seatinh can allow dogs though, where this used to be a very easy going town for dogs in bars public health officials have tightened up a great deal. Werre one to come to key wets without a dog, fiogure out the lay of thje land then go to the amply stocked pound and get a dog that might be best. if it were possible.