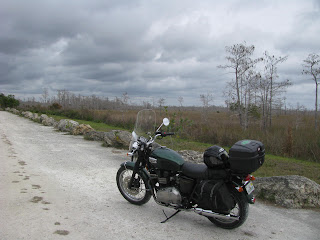 My Bonneville is my main means of getting around. While it is true I have a fine Nissan Maxima parked under the house, and my wife cheerfully lets me drive her trash-filled convertible or even her delightful Vespa, the 2007 Trumpet is what I turn to when it's time to get on the road. 14 nights a month The Triumph and I share the Overseas Highway coming and going, and while I am upstairs in air conditioned comfort the Bonneville sits out in the parking lot at work, come rain or fog, salt air and dust. Even at home all the Bonneville has to call home is a patch of cement, exposed on the sides to the elements while I sprawl upstairs in my palatial 700 square foot residence. I should not be surprised then that specks of rust have built up in a couple of places. On the mirrors for instance: 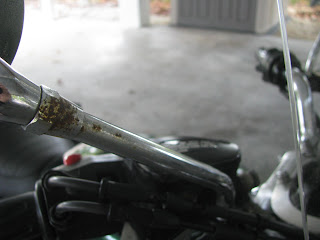 Or the front fender (mudguard) struts which are in the way every time water is spraying off the roadway: 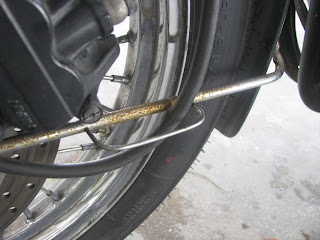 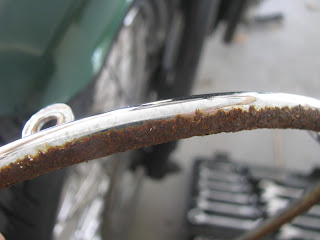 I have been noticing this build up of crap for a while but what with other things going on and the daily preference to keep the Bonneville on the road,rusty specks have been allowed, for some mysterious reason, to get out of hand. I put a stop to that finally, at least on the struts. I pulled out the toolkit and all the other crap necessary for the task: 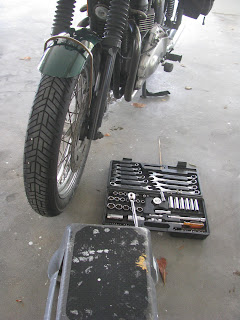 Lacking as I do the air conditioned garage aforementioned, I was glad the weather had taken a small turn for the cooler, especially as April can be warm in the Keys, which is to say humid. I took the struts off which involved nothing more complicated than unscrewing some bolts. And in the case of the rear strut I had to unscrew the speedometer cable which was easy enough. Of course there was prep work, chipping off the worst of the rust then endless sanding to get the chrome remaining, smooth and ready to accept paint. Then I had to figure out how to get the Rustoleum primer and black paint onto these awkwardly shaped pieces of metal. They look like nothing quite so much as croquet hoops and they are not deigned for easy painting. I scratched my head for a while and eventually I figured out threading some string under my deck and attaching the hoops with zip (electrical) ties to the string. It looked eccentric but it worked: 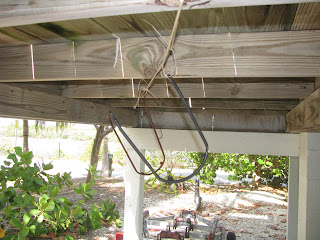 Finally I got to work with the spray cans. Now I have to confess I am the world's worst painter and second worst cook. I have no patience for the fine art of applying color to anything, be it walls, paper or croquet hoops. Equally I would much rather wash dishes in the kitchen than patiently mix up ingredients and watch them simmer on the stove. I grew up with institutional food and an English boarding school education will equip one to eat anything, though it doesn't do you any good when it comes to learning how to be a good painter. Either you can daub or you can't. I can't. 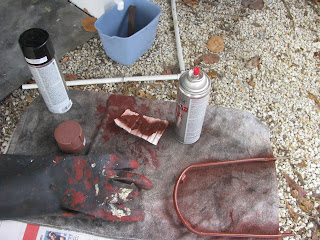 the way I figure it, the sanding and primer will help the black paint to stick and may slow down the development of rust for a while. So even if it doesn't look that great (and photography is my friend in this instance), it's better than looking rusty: 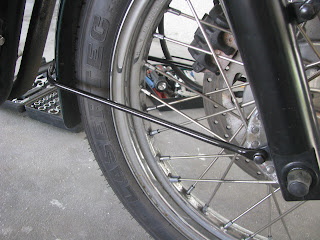 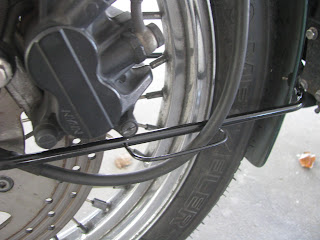 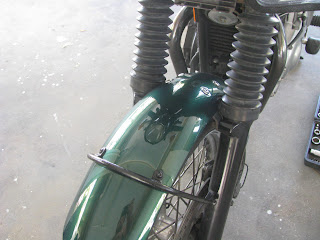 The struts are done, the speedometer is reinstalled and all is well with the world. The problem is I got brave and thought about doing the mirrors too, but then I realised first I had to remove the Parabellum windshield, which isn't hard to do as it's just four screws, but I wasn't sure spraying the mirrors would be my best move. In the end I got some Brasso and reduced the rust on the mirror stems as much as I could and left it at that. I have painted the supports for the windshield previously as they rusted up almost instantly and they have held up okay for the past year and half though they do show signs of wear: 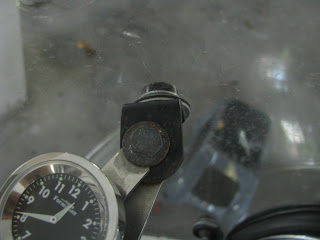 Here endeth the lesson. Much better it is to be riding than struggling with nuts and bolts, paint and primer. 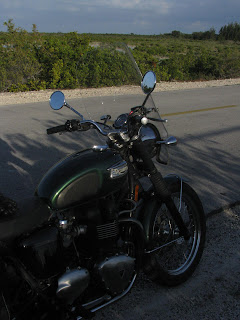 The Bonneville looks fine even with a few spots of rust. It is, as I keep pointing out, a daily rider and that justifies almost any abuse.
Posted by Conchscooter at 12:01 AM

Conch:
We have the same problem with rust up here too, caused by the humongus amount of salt used to clear the icy roadways. Also condensation from temperatures hovering below and above freezing. We have to always wipe down the condensation especially on the chromed mufflers. I also have rust appearing in some isolated spots. Perhaps if I am in your area I could get you to touch up my spots too. You look like you know what you are doing.

Stiffie's (my significant other, who is a woman) Honda developed all kinds of rust specks on the aftermarket chrome parts, such as the Hollywood light bar, the welded joints on the chrome crash bars, and on the mirror posts. I found this disconcerting as the bike never had an accumulated total of 800 miles on it before it was sold. (You read that correctly -- 800 miles on a tricked out Honda Aero Shadow.)

As I stared at the rust, I thought, "What a piece of shit." Naturally, there was no rust on any part of the 18-year-old-BMW. But the fact is motorcycles are made to be ridden and rust flecks, like dings in the paint, and tiny ctacks in the windscreen (both of which are on my Beemer) simply add to the character of the machine.

I know that rust is annoying as it implies a lack of care, though this is hardly the case with your machine, nor with mine. Looks like you got it all though. The rust on the mirror stems is a real pain in the ass as it leaves pitting. The crash bars on the K75 were initially chrome and road salt left them pitted and dull. (The Germans have no concept of decent chrome plating.) That's why I had them powder-coated.

Does the Rustoleum primer and paint stick to chrome?

I'm sure I said this before, but I love the knee pads on the Triumph gas tank. The design of my current low-ridng version of the K75 shed those for a combination tank protector and side cover replacement unit. I prefer the pads on the tank for that classic look. The whole tank protector thing sort of works, but doesn't compare in looks with the previous model.

I am having other cosmetic problems with my bike that writer's disease is preventing me from dealing with at the moment.

A rock has scratched the paint on my front fender. The scratches are hairline and will have to be dealt with using a hairline brush. I will ask my friend Corey, who is a custom painter to deal with this. I hate having to make delicate repairs like this shit.

Your bike looks great. I love that retro look. Have you ever seen the Parabellu fairings specifically for Triumphs. They are really cool too.

Powder coating would be best but for the moment the rustoleum will do. My incpmpetence painting is less glaring to my eye than the deep rust gouges visible previously....
The Triumph runs as reliably as one could hope , but with 60hp it is much less powerful than say bobskoot's smaller 650, so the fall back position is the looks of the thing. And if you were around and riding in the 70s like me it is a great nostalgia trip to ride a bike that looks like your youth! They also seemed to rust less back then...?

Conch:
I also have some pitting on the cast parts that hold the 2 front shocks. Because the castings are "rough" you cannot polish them out, so what to do except to just leave them alone. I like to take care of my things so mechanically my SV650 rides like new. I am nearing the time in my life cycle where I hope to be "put out to pasture", however the stupid economy is making it impossible and now I may have to work past that magical age, when I should be enjoying myself and life in general.
I was thinking that I should get a machine with a larger engine, better able to transverse our great continent to those tiny islands south of Miami at the end of that dead end road with the view of Cuba in the background.
It would seem that the engines of larger machines are built understressed with longevitiy in mind. While the K75 of Jack's has NO power whatsoever as compared to the smooth 90degree V-twin of the SV650, they (K75) are capable of reaching in excess of 250,000. miles without major problems. I am sure that your Bonnie is equally capable, even though it is British Made.
While in my search for the Perfect bike, I even went to the Triumph website, and somehow I fancy the 675, or the Triple speed. This weekend there are BMW demo rides so perhaps I will swing a leg or two over a couple of machines to check them out.
I remember the 70's, back then I had a Yamaha 80, then a CB350 Honda . . . ah memories, if we only knew back then what we know now . . .

next time you sand em all down, you might want to prime them with something like Mar-Hyde One-step Rust Remover Converter Primer Sealer, 3M Rust Fighter-I, Loctite Extend Rust Treament, or Permatex Rust Remover. These products do a nice job at inhibiting rust and priming the metal at the same time. We used a lot of this type product when overhauling old cars that had been sitting out in the weather for 20 years or so.

Not sure what y'all have for parts houses, but anyone that sells any automotive paints should carry something in this line of product.

Now, back to enjoying Bobskoot and Jack Riepe :)

Brush off the loose rust, treat the area with phosphoric acid (available at a paint shop or hardware store), prime and paint. Won't rust again unless you broach the coating mechanically.

Phosphoric acid eats rust quickly, but slowly etches metal. Leaves behind iron phosphate, which is a rust inhibitor. The roughened surface is excellent for primer and paint to bond to.

I wonder Conch, if you could secure some tiny little sacrificial zinc anodes to the bottom of the Triumph. :D