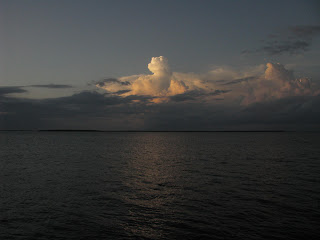 It is said the playwright Tennessee Williams, in a moment of inebriated jubilation toasted the setting sun on the waterfront in Key West, and with that simple act of honoring the best show in town set off the carnival that sunset has become at Mallory Square. 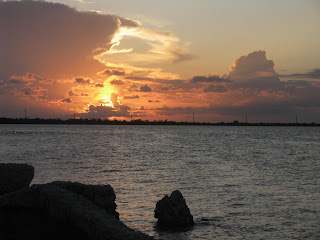 Residents of the Keys have an ambiguous relationship with the visitors who keep the economy going in the islands. They argue over the noise of Navy jets training from Boca Chica Naval Air Station, a huge source of local income. They make fun of civilian tourists who flock to the town year round, wide eyed with wonder at this tropical paradise. Residents have a long history of nibbling the hand that feeds them and it is normal to tell various jokes about the gullibility of visitors. "Do they schedule a second sunset?" we are told they frequently ask. "Can the sunset be delayed till after I finish my dinner?" Then the locals hang out in the bars, cadge free drinks and tell tall stories for their liquid supper. Me? I head north to watch the sun set. 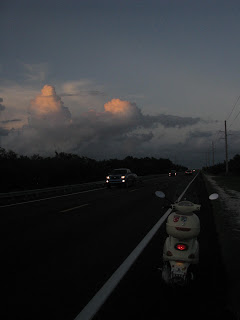 I don't get to watch the sun set that often. I am usually at work at the magic hour but one evening when I was home and my wife was working late I decided to go for an evening swim at Veterans Park, a turn out 13 miles from my house at the southern end of the Seven Mile Bridge. My wife's Vespa ET4 has been at home since she injured her shoulder so I decided it was a relaxing ride I wanted and the 150cc scooter would be the ideal tool for the job. 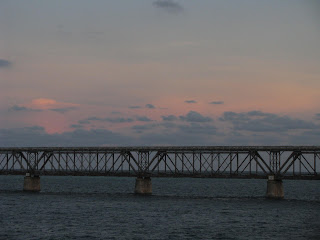 There was no traffic heading north so I stopped on the new Bahia Honda bridge, with two empty lanes all to myself and played with the camera. 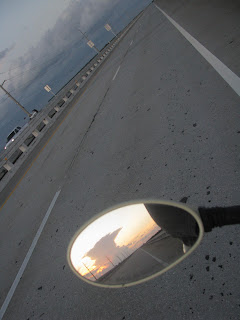 I ambled along at 50mph (80km/h) enjoying the road, the warm air, the sun dropping rapidly out of sight and taking all prospects of a sunlit swim with it... I didn't care, I was here in the spirit (if not the inebriation) of the playwright. The trailer park at Ohio Key looked good as I floated by. I saw a group of residents, their golf cart parked on the old Flagler bridge watching their own private sunset in the shadow of the massive flag, a splash of color against the gray thunderheads of summer. 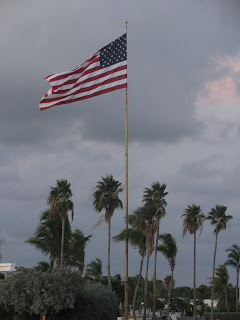 Veterans Park is a narrow beach fronting shallow water, equipped with a few ramadas and palm trees to give the necessary sub tropical ambiance. 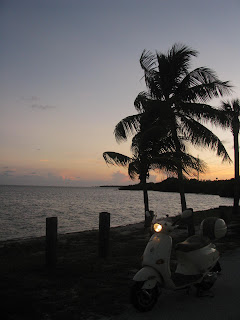 People who insist on wearing all the gear all the time miss out sometimes on the subtle pleasures of just jumping on and going. You never know what happens when you submit to spontaneity. Perhaps a palm tree will sprout out of your head. 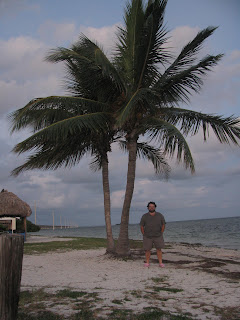 To the north, at the other end of the bridge seven miles away, the thunder clouds were piling up, over the first twinkling lights in the city of Marathon. 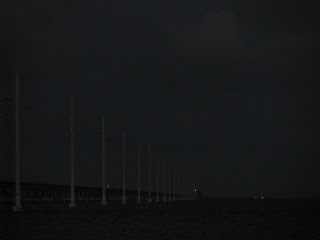 To the west the sun was putting the finishing touches to it's act. 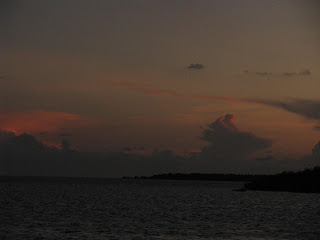 It was the start of bike week and Harley Davidsons by the thousand were starting to invade the islands. The road may be straight but it does offer out of towners a different experience, that of riding over water. 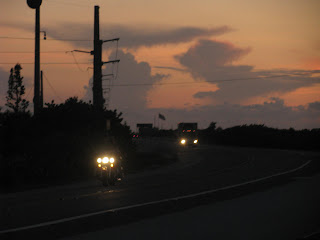 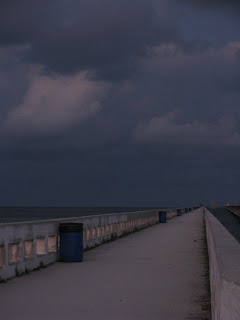 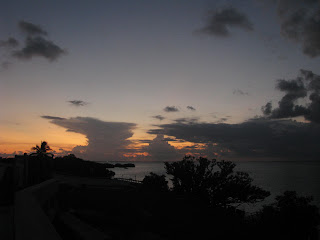 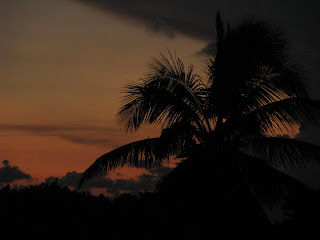 The Vespa is a relaxing ride, surprisingly fast especially for car drivers who think mopeds can't go faster than a snail's pace. The little Vespa 150 can run 60 mph (100 kmh) all day on these level roads: 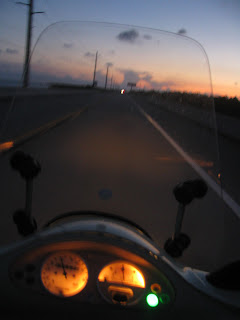 In Big Pine I stopped off to check in on a friend... ...and home to dinner with my wife. All that or I could have watched jugglers at Mallory Square. Luckily I live here so I get to take more than one bite at the sunset apple. Maybe next time I'll jostle with the crowds and leave a large tip.
Posted by Conchscooter at 12:01 AM

Thank you for the great sunset pictures of something other than the Mallory madness that goes on each night. It's good to know that the sun sets somewhere other than the requisite tourist trap. On another note, I love your blog. It keeps me going until I can make the trip back and be one of those tourists that the locals love to mock.:-)
KT

Only assholes mock tourists. The Citizen has been encouraging people to be nice to tourists and to my surprise people poring over maps are grateful for help. I shall do more of it when they return to undress for fantasy fest.I am glad the pictures help you survive Up North. Ignore the posts with no pictures, they are just me ranting.

The pictures that expanded in this collection were all the right ones, mostly, depicting sunset after sunset over water and bridges. The only odd shot was one of a visiting ballet dancer, wearing pink bunny slippers.

I especially enjoyed the shot of the Vespa's dash in the darkness. There is a large green light glowing on amid the dials. Does this indicate neutral, or the presence of pink bunny slippers? I thought these machines had CVT drives, which precluded "neutral."

Now since you mention Fantasy Fest, I hope it will not be necessary for me to advise you to limit illustrative photography to women participants, between the ages of 22 and 34. We are all counting on you to get this right. Especially Bobskoot. In Canada, Fantasy Fest is a parade of civil servants, who are gagged and cannot tell you what not to do.

The green light is an extra stupid idiot light inveted by a union dominated company (Piaggio) that tells you your lights are on. Why? I don't know because as you point out it has CVT gearless transmission, you smart man.
I work Fantasy Fest night but I shall try to be out in the afternoon and I'll ask women if it's okay to photograph them as riepe has run out of imagination, poor boy.

It is not that I am out of imagination... I am out of contact with naked women walking around with painted on clothes. The day I have no interest in that I will trade my pulse for the dirt nap.

I am amazed that the green light (which is the size of a drink coaster, apparently) is to tell you that the bike's lights are on. Do they stay on when the ignition is switched off? That would annoy the hell out of me pronto.

When Leslie (Stiffie) had her Honda Aero Shadow (which was a classic cruiser configuration), it used to drive me crazy that the idiot lights were the size of thumbtack heads, including the turn indicators and the neutral light, and were all located on the gas tank in the heavily chromed speedo.

I struggled to find them. The neutral light on the K75's dash is the size of a business card and strategically placed so Stevie Wonder can see it. As I get older, and body parts fail on a daily basis, I begin to appreciate things like large numbers on a watch face, practical controls on a motorcycle, and white socks.

What do you think of the book "Hitler's Pope."

Why white socks? What other color is there?

Hitler's Pope answer the question of whether or not Pius XII was an anti-semite or not. More or less.I liked it. More to the point who gives a damn, in an age when I am told the President is a fascist and a a communist at the same time. How the hell did he manage that? Stalin and Hitler were lesser men obviously because they could only manage one at a time. Pius XII was a rank amateur by comparison as he was neither (more fascist by inclination though).

When I was a kid, anyone who wore white socks off the basketball court was a douche. I now have 15 pairs. I have one pair of black socks in the event I am called upon to testify before Congress.

I have contacted my BMW dealer about getting a big orange light installed on my dashboard. It would go on to indicate someone was sitting on the bike.

I see you have dusted off your Pink crocs. The sun is setting earlier, but it is also rising later. During the past few days I have been wheeling my bike out before sunrise. Soon I will be riding to work in the dark.
I still don't understand the need for the Green Light, you can tell the lights are on by the illuminated gauges. I'm squinting, is there a tach on the Vespa ? (the pix won't enlarge)

No there is no tach on the vespa. Fuck you both. Neither of you is man enough to wear pink crocs in public. Guess what? I went to Bahia Honda today on the Vespa and I walked onto the public beach in my pink crocs and two european women invited me back to their tent and ravaged me, forbidding me from removing my crocs. So there, ten pounds of shit in a two pound bag.