Art At The Fort

Evening at Fort Zachary Taylor, as close to the southernmost point of the (continental) United States (excluding Hawaii and Puerto Rico, the Virgin Islands, Guam and American Samoa) as makes no difference. 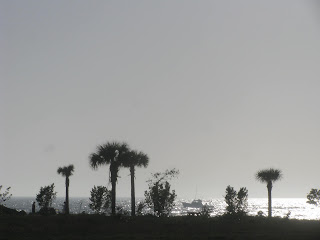 Fort Zachary is a state park centered on the old brick fort that was built as an island and got surrounded by dirt they dredged out of the harbor to make it deeper. 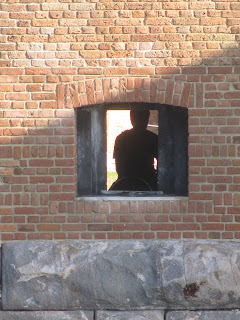 I decided to go and check out the annual sculpture exhibits that used to be known as Art in the Park and are now known as Sculpture Key West. However the shine seems to be off. This bicycle isn't an exhibit though I was tempted to pass it off as one as the pieces on display seemed to be in short supply. 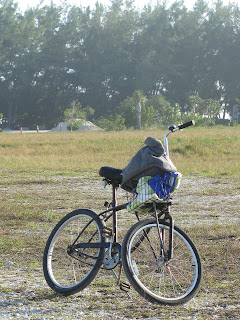 These folks seemed more organized than me as they were reading some sort of guide. I haven't seen anything published in the paper about this year's sculpture exhibit except a couple of photographs. 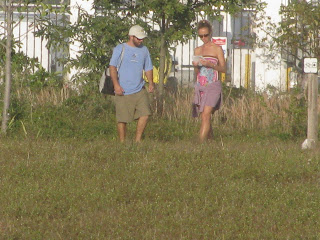 In years past there were lots of obscure and interesting pieces from all over the country. This year we have to make do with less, which is I suppose a suitable theme for this period of graceful economic decline into shabbiness. Except, it turns out, the organizers of the Sculpture Key West have decided to take three dozen exhibits and scatter them around town. Some at the Botanical Garden, some at the Garden Club and just a few still at the state park. I suppose that creating a successful tradition at Fort Zachary means that suddenly everybody wants a share and so make a mess of what was a good thing. This looks like a rump sculpture show to a philistine like myself. There again I don't have my ego wrapped up in gardens elsewhere in town. 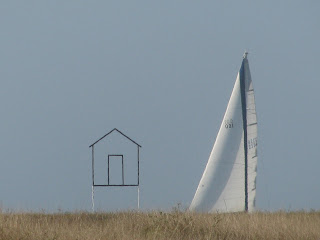 The sail is not actually an exhibit either, it was just somebody sailing out of the Key West harbor taking advantage of an unusual westerly breeze. The house shape is an exhibit as is this, one of six located in the waterfront field at Fort Zachary: 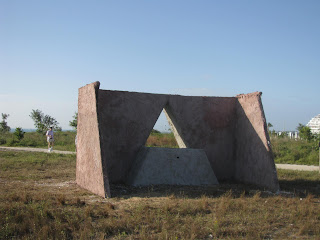 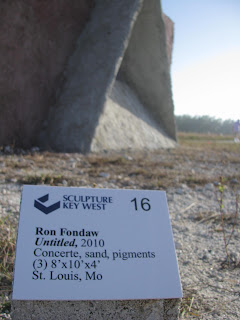 Besides I have the assistance of spell check and cock ups still find their way onto the page. This next one looked like an iceberg (the ship I hasten to add is not an exhibit though it might look like an iceberg if you had been drinking heavily). 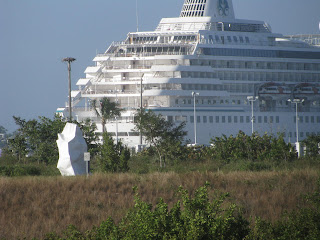 This picture I waited to compose and Cheyenne was not happy. That dog gets very impatient on her walks sometimes. 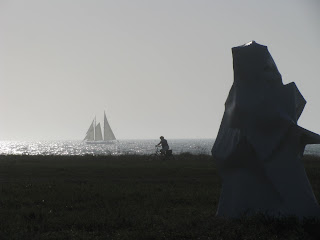 I asked another viewer if this looked anything like an Ambit of Faith and she remained sturdily gormless in the face of my apostasy. Either that or she was a foreigner. That happens a lot to me in Key West. I imagine they have something wrong and really they just don't speak English, which is bad enough for them I suppose. 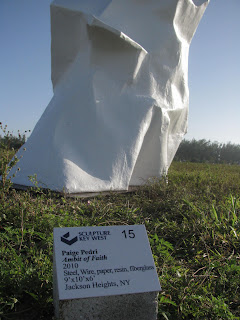 I don't want to seem like some Neanderthal but what in the name of all that's holy, is an ambit of faith? And how does that relate to a paper mache sculpture? 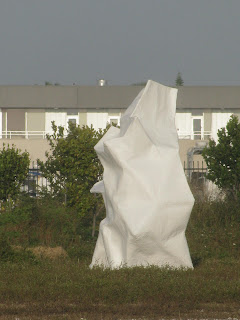 That's the thing about Art in the Park it always ends up challenging you. The wooden twig representation of a giant hula hoop and a similar effect, 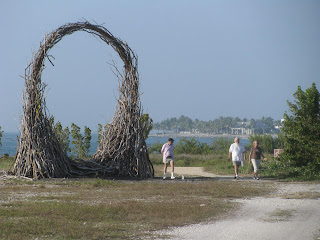 ... even for people who got up close to study it. 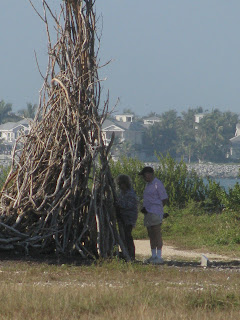 That is Sunset Key in the background across the harbor (also not an exhibit, needless to say nor is the yacht shown below for effect). 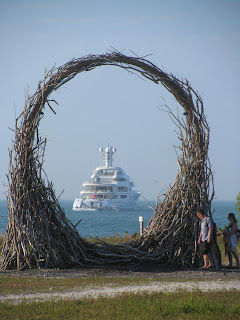 The hula hoop is actually called Forest of Souls and came with detailed explanations which made it the hit of the afternoon for me. The idea is to have people write the names of things they miss, or people who have died and embarrassing emotions like that as a sort of public memorial. The rules include such limitations as nothing rude or inappropriate, though the fact that writing rude words has to be mentioned at all continues to surprise me. 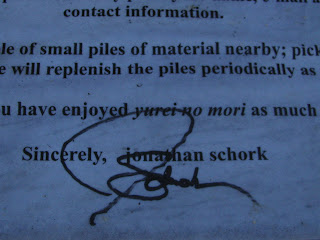 I made my contribution though I did see lots of mentions of the cause of the week, the survivors in Haiti who did not get that much press when they were reduced to eating mud cakes while starving less publicly a couple of years ago. 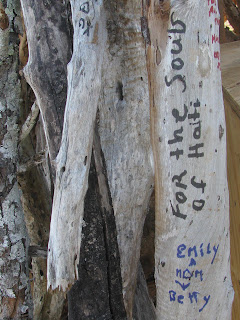 This next one is the title of one of my favorite movies, though what it actually represents only the artist knows: 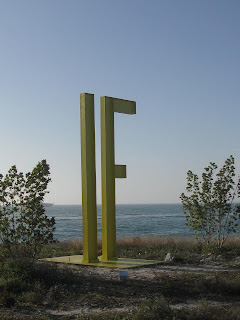 This is not an exhibit but a little beach that used not to be so heavily fenced off. As I recall some people used to use it while not wearing any clothes. Which probably made no money for anyone so these days the clamor is for an official nude beach. 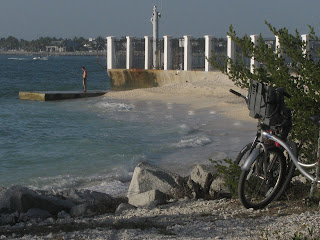 And out to sea a man, a jet ski, a floating sculpture. 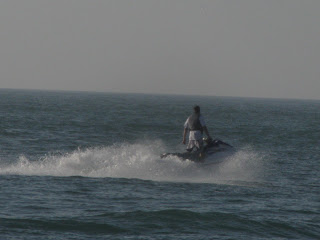 This was an exhibit, Three Card Monte, and gave me the opportunity to get my annual self portrait in at the art event. 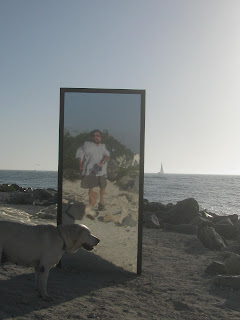 The idea is that one of the frames has no mirror in it, like the card shuffler, I suppose, asking you to turn up the Queen. 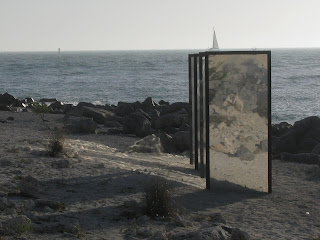 Normal park activities continue even as the sculptures go up. Fishing is not an exhibit, as far as I could tell though it is not generally an activity filled with motion. 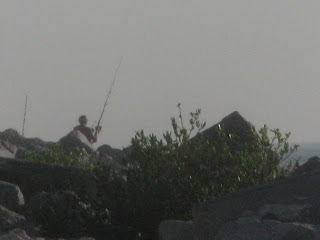 This field through which Cheyenne was stumping along has been, in the past, filled with exhibits. Perhaps there will be more to come next year when someone figures out that spreading a show across five miles, in a four mile long town is a stupid idea. 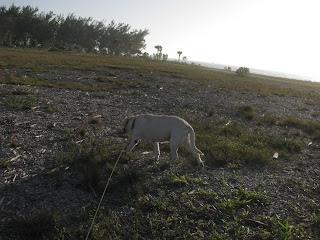 And let us not forget the fort itself which deserves a view a sit is the host of the proceedings. 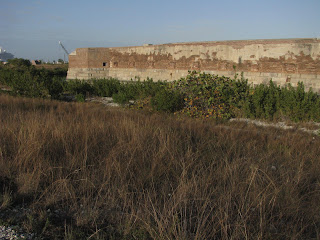 And very nice it looked as usual in the setting sun. They also charge a third the cost to get in here than they do at the Botanical Gardens. Very plebeian I'm sure.
Posted by Conchscooter at 12:01 AM

One has to be in the right frame of mind to enjoy art al fresca and a curtain of gloom has descended here to match a sudden drop in temperature and the gray pall outside.

In reverse order, I find myself thinking "if" in terms of, "If only the yacht in the winners' circle were mine today..."

There is poetic justice in finding your image on a piece called "Three Card Monty."

"IF" is certainly the poignant question!

I really like your pairing of the small house outline with the disembodied sail.

I see Cheyenne is the true art connoisseur, skeptic and critic at the same time, but ever so accepting -:))

I convey my best regards to Monty.

I can't help but think that you were taken advantage of with your 1/3 admission. There are 3 dozen exhibits of which only 6 were at Fort Zachary, and most of your photos included objects outside of the display.

I also liked the floating house with the sail.