I recall that after Hurricane Wilma drowned a large part of key west in 2005 there were no reports of looting. Even after K Mart flooded with three feet of water homeless people in Key Plaza gathered up the floating merchandise and stacked on the window ledges at the store. On the other hand help wasn't long in showing up. Hurricane Katrina had hit New Orleans a few weeks earlier and Florida Governor Jeb Bush had the National Guard in the Keys as soon as the storm blew by. We had truckloads of water, food and ice available by the next day. Chef Boyardee never tasted so good! In New Orleans it was another story and the entire city was left to it's own devices for days. People starved, drowned and dehydrated in the submerged city. Then we heard stories of "looters." 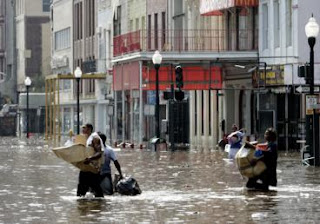 From the AP archives.
What I wonder were people to do, abandoned and impoverished anyway in a city that had literally drowned. I wonder how many of us would have resisted the temptation to take food and water (and beer) off the surviving shelves? Reports of widespread shooting and violence were apparently greatly exaggerated though who was to know at the time? Now in Chile people are being accused to "looting" in the city of Concepción that has been flattened by an earthquake, I'm not sure toilet paper would be my first priority were I destitute but to each her own: 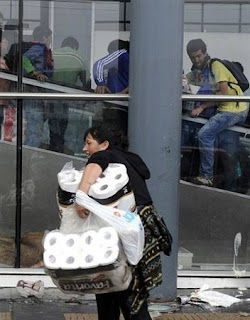 From Reuters.
And so it is one has to wonder what the protocol is when civilization has broken down all around you and the normal transactions of daily living have ceased. I suppose everyone wanted to believe that Haiti would end up a cesspit of violence after their earthquake, and this picture from a survivalist blog would reinforce that prejudice: 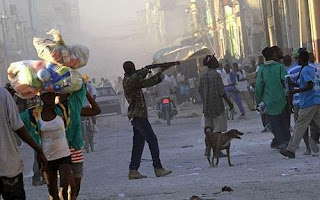 Yet we hear from rescue services that despite the horror, people in Haiti have behaved with admirable fortitude, restraint and self reliance. I guess people will steal given the opportunity, God knows our bankers have managed a grand theft of historic proportions right under our noses. About that I could do nothing but protest. I hope that when disaster strikes my hurricane supplies will survive intact and I will be able to hold out relatively comfortably until help arrives. I would hate to be labeled a "looter" were I forced out to hunt and gather supplies after a disaster.
Posted by Conchscooter at 10:00 PM

Email ThisBlogThis!Share to TwitterShare to FacebookShare to Pinterest
Labels: Economy

The toilet paper was probably the easiest thing to carry, and I imagine as time goes on and running water continues to be unavailable it might gain status as a kind of currency. Seriously.

So much empty billboard space and advertising time has been filled with admonishments to be Ready-3 Days, 3 Ways™ (moreso in Seattle than Portland). And it's all well and good to have your little Fatherland Security Survival Kit assembled at home, but what if you aren't home when the Big One hits? We're all putting in so much time at work, after all.

The Pacific Northwest being one of the two most likely places to suffer a 9.something quake, it shouldn't come as any surprise (but probably will) that most transportation will be impossible, I-5 through both cities being elevated on rather spindly structures. Portland's biggest hospitals are clustered on an amazingly steep hill with just one road leading to them, and generally more stuff is built on steep hillsides here than even California.

But I think I'd rather be in Portland if the big one hits. Seattle now has a mayor whose solution to everything is to have a Town Hall meeting, and last year the place was paralyzed for two weeks by an amount of snow that would barely faze Spokane.

Which might actually be a good place to be when the big one does hit...

I was very impressed by the public spirited response of people in the keys after Wilma. It's hard to be here and not be aware of how close to true isolation one really is. What happens if the grocery trucks stops delivering I have no idea. I keep toilet paper in the shed.

Imagine what it would be like to be trapped in your little tiown without running water, electricity, and telephone services for two weeks. Without electricity, the local gas station cannot pump gas. The ATM's don't work. Food in stores starts to spoil.

The worst ice storm of a century hit upstate New York in 1998, and the conditions I described above are exactly those that settled on the Town of Wilmington, where I lived at the time. We were two weeks without electricity. Sucked for those who had pumps to take water from their wells.

Millions of tress fell down and blocked all access by road for ten days. Yet when the National Guard got to us, they found a community that had organized two shelters, had evacuted the elderly to the center of town, and accounted for every person in every surrounding mountain homestead, including Sheep Shit Annie, who was in her eighties, and out guarding her sheep.

Stores withouit power can't run cash registers... So from the hardware store to the grocer's to the saloon, all you had to do was sign a book. Nothing was stolen. No place was broken into. Everybody worked together. Welcome to real America.

And now you live in East Goshen and don't talk to your neighbors. Perhaps they call you Oilhead Dickhead as they pray for power outages?