I have been reading Don't Stop The Carnival, a novel by Herman Wouk of the trials and tribulations of owning a Caribbean guest house and a passage about Norman Paperman seeing the famous green flash caught my mental recollector. 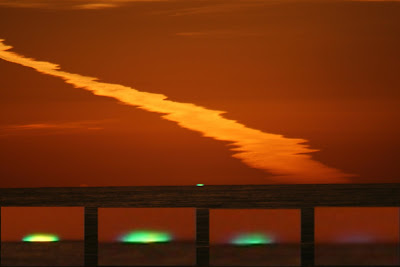 Several guests left their tables and joined the watching crowd. It was a remarkably clear evening. The sun, it's lower edge already sliding below the purple horizon, was bright as gold. The shiny disk sank to half it's size, reddening and dimming. It went lower turning orange-red, shrinking moment by moment. Soon there was only a glistening orange fragment poked above the ocean- and at that moment Paperman saw it. In the instant of it's vanishing, the last bit of sun turned green. There was a wave of chatter along the rail. Some had seen it, some hadn't, and everyone was talking at once. 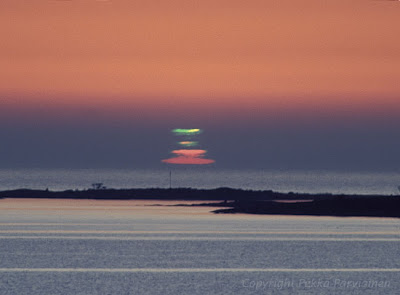 I spent years looking out to see hoping for a green flash. In California such a thing isn't possible owing to the fog obstructing the horizon. When I traveled to more benign climates I looked for the mythical green flash. When we sailed south along the coast of Mexico and Central America we looked for the green flash all the way to the Panama Canal and failed to see it. In the Caribbean sailing to Key West, I failed to spot anything remotely resembling a green flash. I despaired. 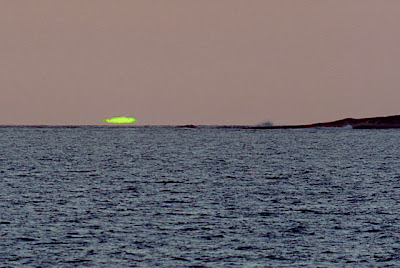 Then I took a job as a boat captain taking visitors sailing almost every single day around the Key West harbor. Every evening on the water we told clients to look for the green flash as the sun set and sometimes they claimed to see it and tipped me handily for the experience. Then one day I finally saw it; I knew I had seen it and had no doubt. Later that week I saw it again. I have seen the green flash twice. Nowadays I look for it half heartedly because I have seen it and I am satisfied. Only in Key West did I ever see the damned thing, and after thousands of miles of open water sailing and never once. And then twice in one week in Key West. Weird.
(all photos Wikipedia)
Posted by Conchscooter at 12:01 AM

I'll have to watch for it next time I'm in Key West.

prime months for seeing green flash in the Keys are Oct-Jan
Helps to have cloudless sky and a breeze in the teens....

Green flash? Key West? Are you sure you're not referring to something that happens on Duval St.?

judi: pay attention to cqapt key west (not florida blogger) as he knows of which he speaks (so does Flrodia Blogger when it comes to yakking).

Speaking of photos, did you take these? They are great of the green flash.

I hope to someday see this and the northern lights.

Haha Thanks for the advice!

I've been lucky to have seen the green flash once while living in Key West. Like you said though, in California the fog keeps the suns rays away as it is today here in San Diego... the marine layer is especially heavy today; overcast, cool and dreary.

Surprisingly, it was clear skies through the holiday weekend, which made an outing to the San Diego Zoo yesterday quite pleasant.

Great photos! We may have to come back in a "prime months" for it and look for the green flash! The sunsets in Key West were unbelievable!

Fraud is your middle name. The last picture in this series was snatched from the internet, and represents the radioactive haze over Linden, New Jersey (as seen from Newark Bay). Why do you feel so compelled to dupe your poor gullable readers.

I hate myself, Lindbergh Baby. Thats why I included the last sentence in the post. I have barely seen the flash let alone photographed it.
How is the diet coming? Will they call you baby Huey soon?
Your sincerely
Iron Butt