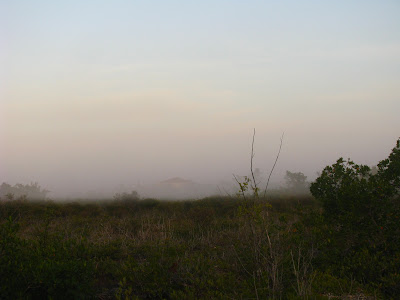 Yesterday we awoke to fog, a Keys phenomenon not unknown but rare enough. 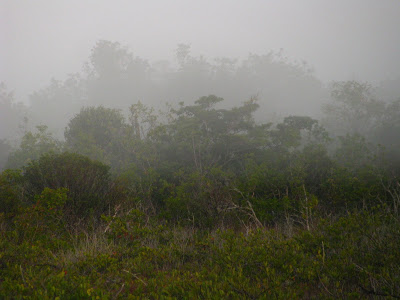 An early morning walk with Cheyenne produced a dawn that looked like something out of Africa. 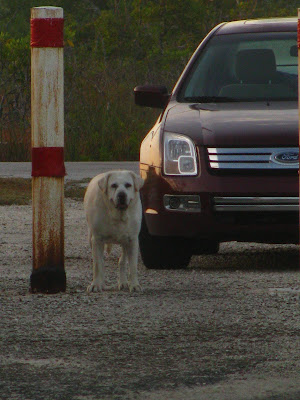 Cheyenne and I usually go to the Pool on north Ramrod Key when I get home at 6:30. yesterday we hardly knew the place in the mangroves. 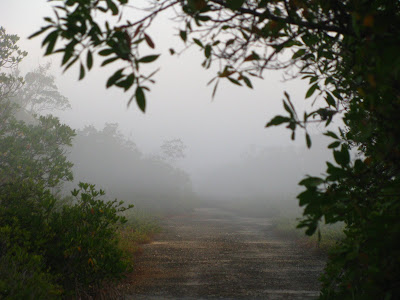 Apparently this is a pocket of mixed warn and cold air preceding a cold front, a storm that has undoubtedly dropped snow Up North this week. 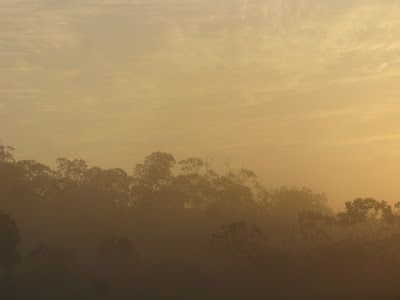 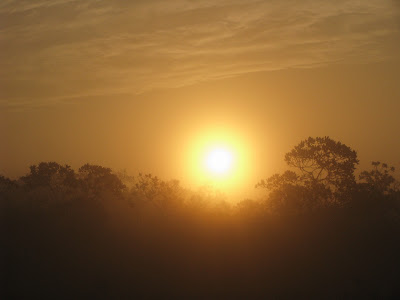 We met a neighbor with her family's two greyhounds; they came and went from the fog and back into it. 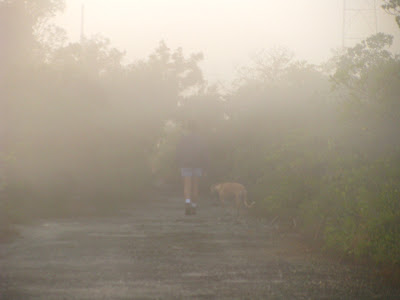 It looked other worldly. 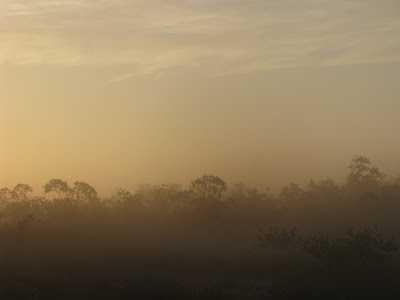 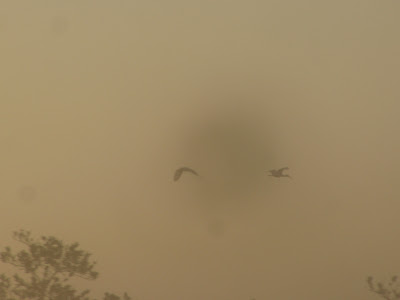 The sky was clear to the south and east where the sun was coming up. 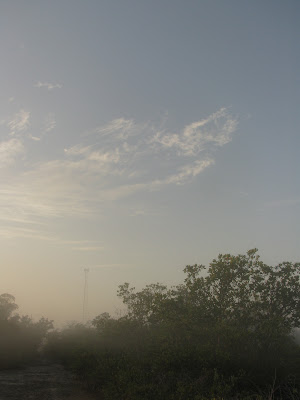 In the midst of all this aerial dampness I found this spider's web. 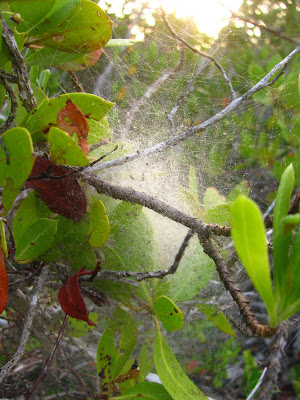 After my customary morning sleep Cheyenne and I went into town. One of my water pumps has failed, according to Wayne who tore the cistern pumping system apart, and i took the pump to the shop for a check up in Key west. The weather was ominous on the way in. 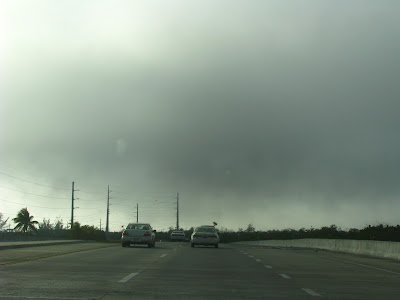 The fog was hanging overhead as we crossed Boca Chica Key. 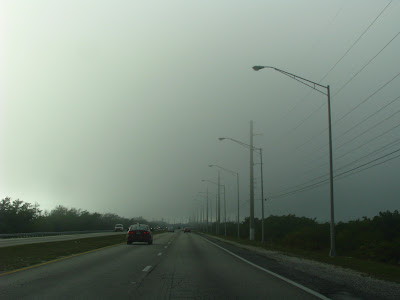 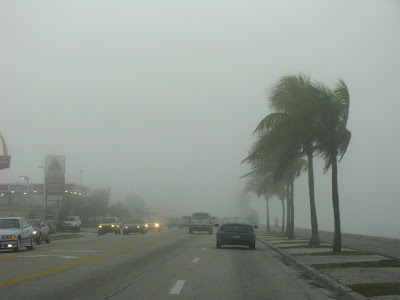 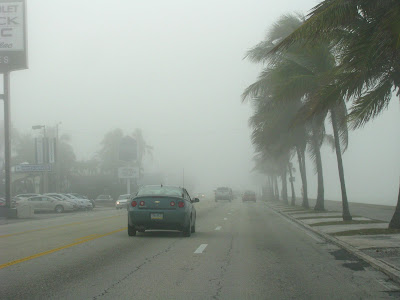 Amazingly enough some idiots forgot to turn their lights on. 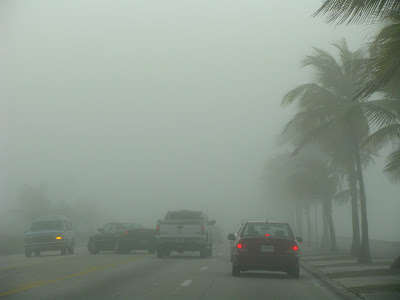 Garrison Bight Marina looked like it belonged in Scotland or some other frigid misty isle someplace. 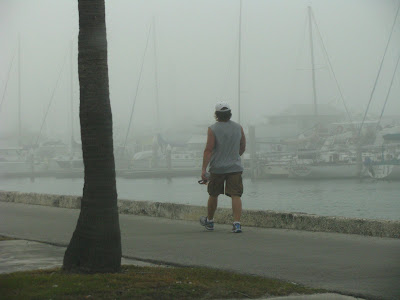 The view from the top of the Palm Avenue Bridge 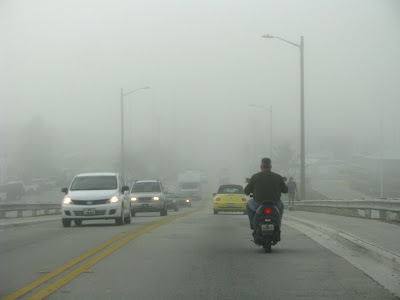 By five thirty yesterday evening the fog was lower and thicker than ever. Here we are back on Boca Chica headed north. 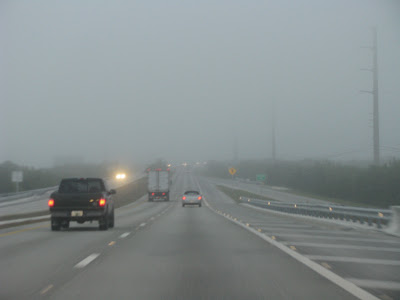 As darkness crept down over the long slow line of cars traffic moved slower and slower as though mesmerized. The power of Nature, a wonderful thing, and a reminder we are in it's thrall.
Posted by Conchscooter at 12:01 AM

In all the years that I lived in the Keys, I never experienced fog like that. It certainly makes for beautiful pictures. Did the fog hang around the entire day?

Morning fog here on the West Coast is a normal occurance but the sun usually burns it away by mid-morning.

Congrats (I think) on being mentioned in last week's Blue Paper for having a local blog worth checking out.

Pretty soon you will become so bigtime that you won't have any time for us little people.

Luckily we don't 'ave fog like you 'ave down there, otherwise it would be just like home. It only comes twice a year during change of seasons.

just remember us "little people" when you get fortune and fame.

bob= I will never forget you, you are one of life's gentlemen.
Len- I am amazed you noticed my honorable mention in the Blue Paper column. No one who matters
in Key West knows who I am. I don't go to parties, I don't have opinions in public places and I don't drink downtown. All of which makes me unknown- exactly as I like it. Besides I don't know why anyone who lives here would want to look at daily pictures of where they live.

I love the sunrise picture through the fog. I've never been to the Serengeti Plains so I'll have to take your word for the similarity. It trees really make it look windy in some of your other shots.