There is a great new place to buy food to go in Big Pine Key. They call it Tortillaville and for a former California resident this Mexican food outlet is a welcome addition to the Lower Keys. 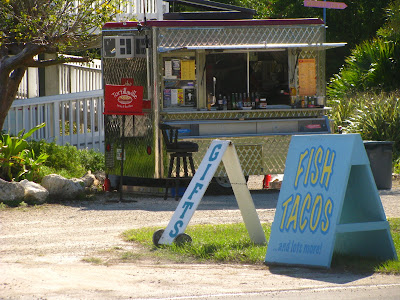 It's a tad bit difficult to predict where they will be but weekends they seem to have settled in front of the Out of the Blue gift shop at Mile Marker 30. 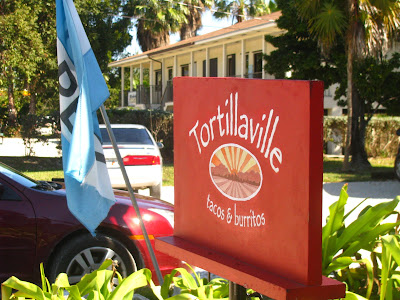 Brian is the male half of the outfit, taking orders while keeping an eye on the tortillas on the griddle. 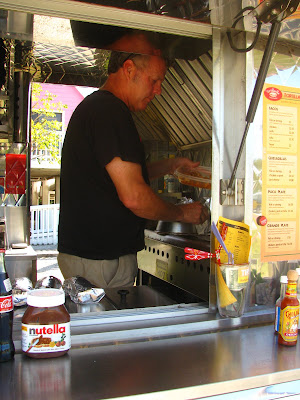 My wife and I enjoy their and shrimp fish tacos and the fish quesadilla was excellent also. My next step is to have a burrito. I am very fond of my Gaucho Ernesto Burrito at Badboy on Simonton but a California style burrito would be an enjoyable addition. 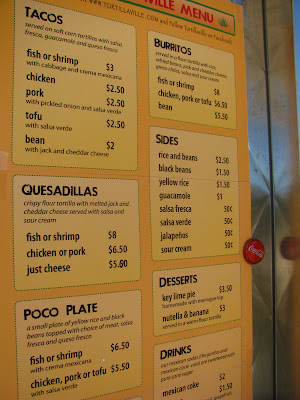 Red white and green are the colors of Mexico. Apparently the health department in Monroe County ran them through a few hoops but all is properly licensed. 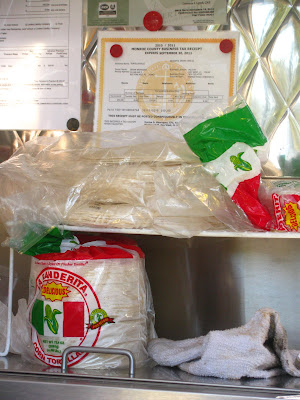 This operation spends the summers in Hudson, New York wherever that is, and now spends winters in Big Pine. Key West apparently throws up a bunch of extra licensing hoops which preclude, at least for now, an appearance in the Southernmost City. 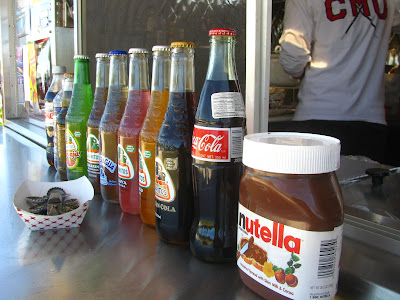 Brian on the right, Allison on the left work in close quarters. 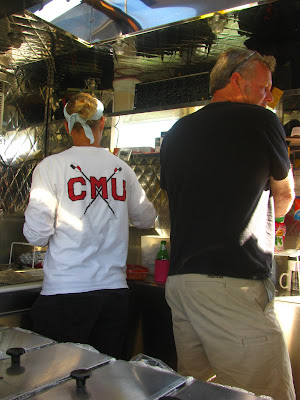 Cheyenne thought this place had potential. 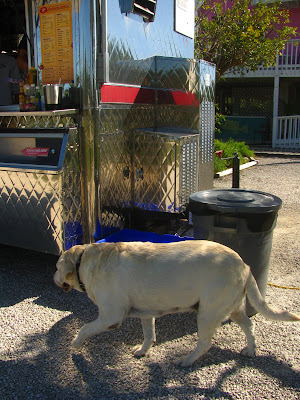 She checked out the trash cans hopefully before settling down to wait with me. 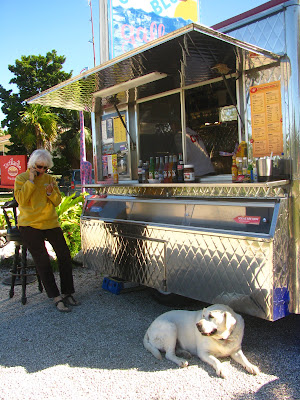 Brian says repeat business has been good, people like us like what they eat and come back for more. However business is not picking up as fast as they'd like, partly because local businesses don't see Tortillaville as a useful addition. They'd like to establish a circuit in the Lower Keys but it's slow in coming. Grrr. 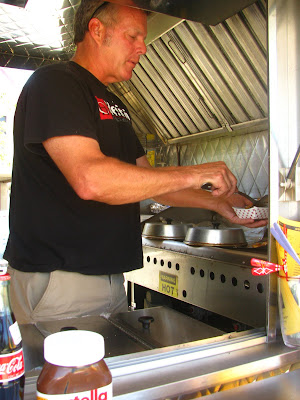 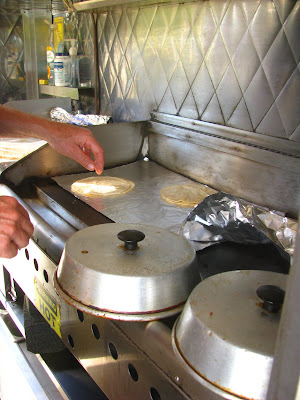 I really want this place to be a permanent addition in winter months. Eating out is costly in hard times and it is a hell of a treat to spend six bucks each and get good food nicely prepared. 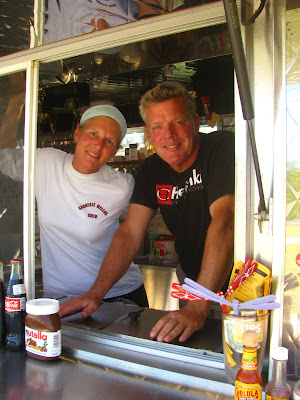 Buzzing through Big Pine of a weekend this is what to look for. 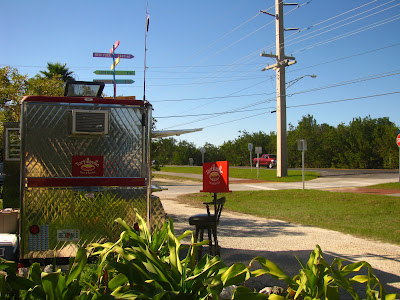 Also you can check http://www.tortillaville.com/ or check them out on Facebook and all that social media stuff that bores the pants off me. 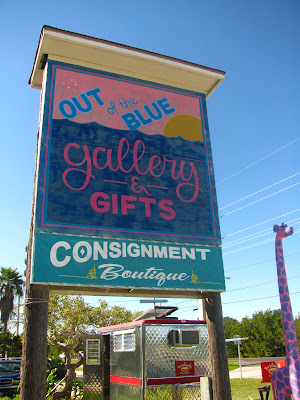 Tall Cathy was visiting our house when I got the call to pick up tacos on the way home from walking the dog. We spread the table on the porch and checked an assortment of fish and shrimp tacos. Eight at three dollars each. More than we could eat for twenty four bucks. 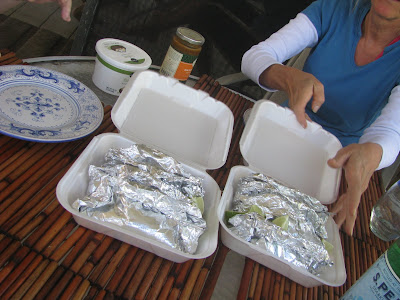 Two tortillas, lots of fish and salsa. We added our own hot sauce and my wife likes to throw in some extra sour cream because she can. 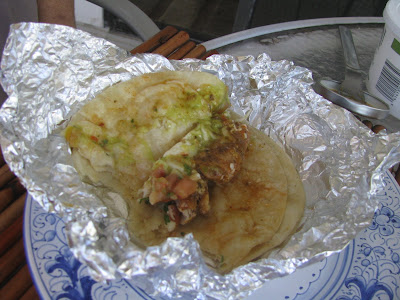 I liked the shrimp tacos okay but they got the big thumbs up from the wife and Cathy. 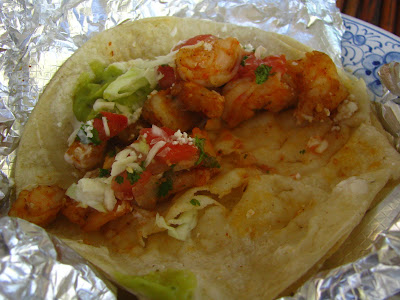 Cathy actually came by to make critical comments about the growth of the garden on the deck, but tacos and Cheyenne won her over and she was quite polite about our growing efforts this year. 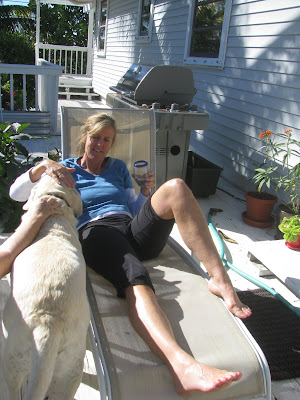 Roll on the weekend, I say because I will be back for more tacos. And after lunch next weekend I expect my lounge chair will be free so I shall get to soak up a few more rays while I doze off my fish lunch. Hoping everyone Up North is enjoying their mammoth snow storm this week.
Posted by Conchscooter at 12:01 AM

A Portland-style food cart in the Keys... destined to be a bigger deal than Seattle coffee, for sure. Especially with the TV show Portlandia putting the idea in peoples' heads...

I love this thing and its not wet and damp and cold like Portland. Did you like my gratuitous dog pictures?

I absolutely loved the post today as it gave me yet another idea of my ideal retirement job should I not get the requisite licensing for my half-way house for wayward bi-sexual Nordic women.

Judging from the photographs, it's ample ACTUAL shrimp for an extremely reasonable price. I think I may need to look into one of thesse!.

Additionally, Allison has a great ass and tall Cathy is a fine drink of water.

Have a delicious Thursday.

It looks like my kind of place. My preferred travelling food is Mexican, burritos or enchiladas. They have a lot of these truck kitchens in southern Washington due to migrant farm workers. The closest truck kitchens are just north of Seattle on Aurora Avenue and we usually stop for a cheap burrito or taco, priced more or less like the one you have there.

also, very close to home for you too, within walking distance

Buy your own franchise for $15,000.
I'm hoping Governor "Robber baron" Scott lets us have our currently well funded pensions in Florida. He may need them to keep his private jet fueled after Al Quaeda takes over Saudi Arabia...

These travelling food trucks are currently all the rage. There are a couple that stop by near my office during the week. One serves overpriced Mexican/Korean fusion, whatever the hell that means. The other sells overpriced comfort food. I tried both once so that I could say that I did. Both are good. Like you, I'd rather have a California burrito. Simple and delicious.

conch, I enjoyed your gratuitous dog pictures, as I always do. This journal is called Key West Doggie, is it not?

My gratuitous dog picture caused a brief but significant spike in viewership. I will continue to experiment with such things. However, the thing that would increase my audience by an order of magnitude is a review of the new 4-stroke Stella. If it ever arrives...

Dear Foodies: remember these things come and go in the keys- weget a taste of what the rets of the country enjoys and then they are gone. I hope the truck stays this winter and comes back next winter.
Orin: my review: Slow, economical, slow and likely to rattle apart. Also Nostalgic while Slow.Thats the Stella four stroke I fear. I wish Piaggio would bring back the P200E. Then I'd have to have one...

Been in Big Pine Key many times as I have been in Hudson, NY many times. Odd and serendipitous to me, since fish tacos are one of my favorite foods.

The world moves in mysterious ways.