Old timers refer to it as City Electric but these days the public utility that supplies electricity to the Lower Keys is using a more encompassing name, Keys Energy: 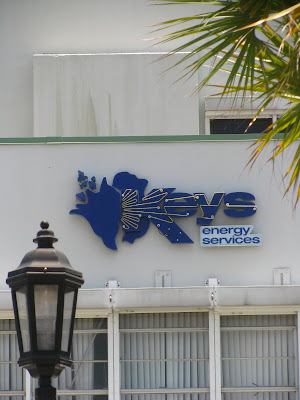 The utility's headquarters is on James Street in Key West at the corner of Caroline and Grinnell Streets, kitty corner to Finnegan's Wake Irish pub. The bloodmobile was in the parking lot the other day when Cheyenne and I were passing and one likes to think they got what they needed (I can't give blood owing to a food borne hepatitis infection I got when I was young and foolish and riding a motorcycle through West Africa. The anti-bodies for Hepatitis A are for life apparently). 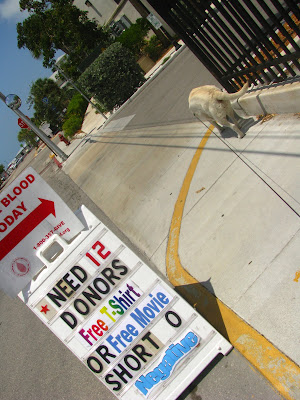 There was, I was delighted to see, a spare couch sitting under a tree across the street from the Keys Energy Services offices. I took the picture but the couch was a tad scruffy and well used so I preferred not to take a pause. The offices of Keys Energy are just a block away from the old Steam Plant, now converted to luxury condos but that used to be, in the old days the source of electrical energy for the city. I well remember the waters across from the plant when they were called the Toxic Triangle owing to the discharge of noxious wastes from the plant. 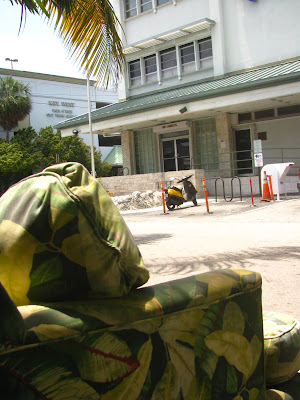 Key West got it's first electric service in 1880 and after a rival company set up in business they went head to head for a while and then merged. The city bought the utility in 1943 and a very good idea that was too. 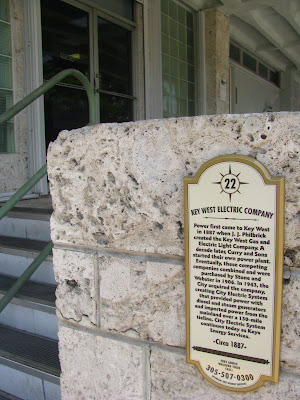 I found this delightful picture of electrical repair work underway in the city in 1900. 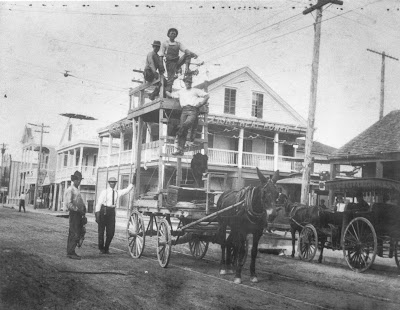 If you enjoy history half as much as I do this website should be of interest: http://explorekeywesthistory.com/ Their magazine is always a fascinating read and it can be found on the streets of Key West (I usually find it at Sandy's Cafe on White Street). 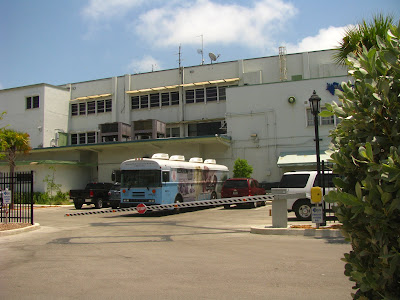 I don't hold with the fashionable view of putting down public agencies, not least because I work for one, but public utilities must rate as one of the more sensible inventions. Keys Energy doesn't waste money paying stock holders, they pay decent living wages, employ skilled technical staff who stick around and now what they are working with, and they are constantly upgrading the system. That they are reluctant to get involved in alternative energy production is a sign they are simply no more forward thinking than every other utility in the country, more's the pity with all our sunlight going to waste. 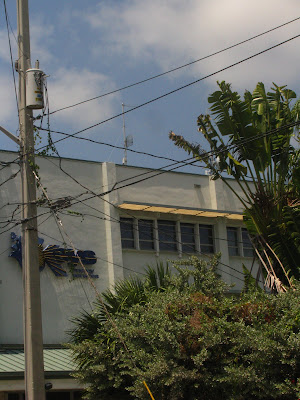 The result is the legendary continuous power outages of decades ago are a memory and service by and large is pretty reliable. Key West is on the national grid and electricity comes to the city via Keys Electric Cooperative in the Upper Keys and through a switching station in Marathon. They also have a diesel generator on Stock Island with fuel for two weeks supply of 80 percent of normal energy needs. The sort of back up plan the tornado ravaged citizens Up North could use in Alabama. I'd rather be here in a hurricane than there in all those tornadoes.

Funny you mention the power outages. When I lived on the island in the 90's they didn't occur often, but I remember them.

On my last visit, my wife and I arrived mid-morning on December 18th. My folks picked us up at the airport and we drove down to Sarabeth's for breakfast. We were seated just as the power went out. We decided Galley Grill was a better alternative to cold coffee and no food.

From time to time they do happen. usually when a sailbota breaks loose and it's masts hit the wires across the channels or when someone drives into a power pole. The nature of the system is that everyone down current is dependent on every one up current so a problem in Big Pine manifests itself all the way to Key West. I am amazed how fast we get power back after a hurricane.

It's nice that you mention the utility workers, the unseen faces behind illumination at night, the air conditioning in summer, and rthe neon of downtown. These guys never get the praise they deserve for being up in the wires, when everybody else is taking cover.

We had an ice storm in Lake Placid, back in 1998, that knocked out power from from Montreal to Albany. We had no electricity for two weeks as the power company had to run 30 miles of new wire to get to our community.

Up The Workers! It's May Day. The more I hear about how long people Up North are without power after a disaster the more I appreciate Keys Energy.