It was last winter that I first tasted Magic Hat beer at an event that included The Porch bar pouring a few of it's excellent choices in beer. I tried the Magic Hat- how could I not with a name like that? 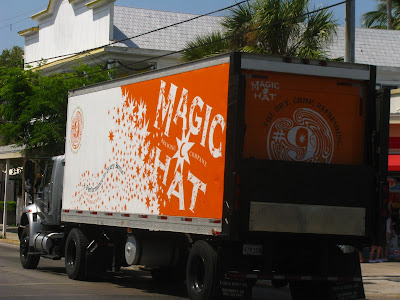 Then I saw a whole truck dedicated to the beer charging up Duval Street. I guess The Porch is selling out of their stuff, which isn't surprising, as it is quite strong and delicious. This next location is a parking black spot and I include it here as a public service. people get towed for parking here after hours. Metered parking isn't that expensive but getting towed from here after hours will end up costing you hundreds of dollars. 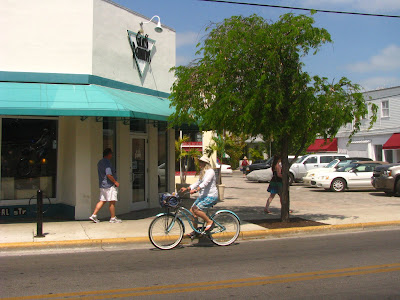 This is the corner of Olivia and Duval but there are lots of locations around town clearly labeled. Park here after hours and you will bet towed. So pay attention. I admired this guy for not riding and talking on the phone at the same time. Indeed he looked quite comfortable in the shade. 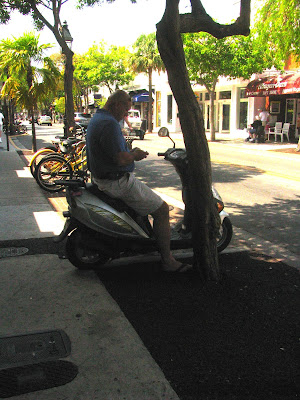 This kid was drinking and driving, but not alcohol, though he was one handed. 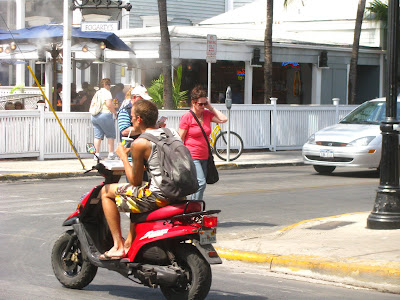 I wonder about parents who ride bare headed and have their kids wear helmets. You are obliged by law to wear a helmet if under the age of 21 in Florida, but it seems to me it sets an odd example if the parent is telling the kid to do as he says not to do as he does. There again I'm not a parent, I just have to live with the results of their training. 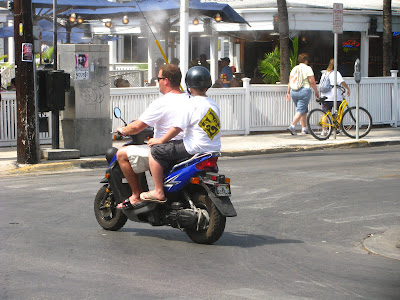 People who ride powered two wheelers and are fussy about wearing all the protective gear all the time would have a shit fit in Key West. But I don't think anyone in Key West is losing any sleep over it.
Posted by Conchscooter at 11:01 AM

I've been known to ride in shorts and a shirt - no shoes. The only folks who get freaked out about it are mainlanders...

As for understanding the consequences - I've low-sided at 23MPH thus outfitted, and have put a foot down at 40 MPH. It does leave a mark!

When I ride my scooter, then I ride outfitted appropriately "KW style". It gives me a chance to get rid of the riding gear for a change and experience the wind as it was meant to be not to be wrapped up in hot, sweaty riding attire. I also noticed this in Hawai'i

After a few years of riding this way, I've discovered my feet are quite tough - and there's a callus at the base of top of each big toe (one for American and one for Brit) to facilitate shifting.

I don't ride the Overseas highway this way - but puttering around town in 2nd and barely third presents no issue, in my mind.

Just back from a beach ride,

The greatest tours from home!

Fear is the capitalist stock-in-trade. If the people aren't fearful they aren't wearing (AND buying) lots of stuff to "keep them safe." Ride more and worry less.
Dear mad jack. I am always glad to see you think I am on the right track. You are my conscience. The comon sense blog is suffering as I work this crazy belew experiment in constant posting. So far I am enjoying the challenge and I needed to challenge myself...

Are you saying you're challenged?

I had got bored by the one a day format. Doing five a day and thinking about how I can organize the content has got me thinking much more about the blog. I am really curious to figure where it will be in a year. I am working on a wordpress site under my webmaster's tutelage so I hope i will have a more...challenging site by August.