This blog started as a geographic photo record of what ever I saw and I wanted to see all the fascinating streets and alleys that make up Key West. This view of Shavers Lane from 2009 is typical of the essays I have been doing since 2007, a mixture of Key West streets and Lower Keys landscapes. All of which will continue next month when http://TheKeyWestLocal.com picks up where Key West Diary and Old Town Key West leave off. 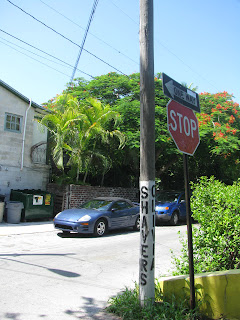 Shavers Lane lies west of Duval, and it has two notable bookends. Above one can see the north side of the Hemingway House on Olivia Street and below on the Petronia street end is the rather oddly named restaurant which sells desserts only called Better Than Sex: 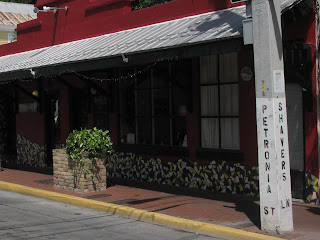 In light of the fact that Key West is currently in a ferment over plans announced by the City Commission to hold a nude beach referendum, you'd think that a restaurant by such an unappetizing name might merit a referendum of it's own. No such luck. That and the ghastly Big 'Uns bar on Duval are here to stay apparently. Looking toward Olivia Street Shavers carries old time Key West charm, breeze block walls and bright lime paint: 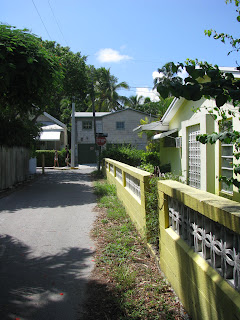 Despite it's location in the heart of the city Shavers boasts vast open lots of land with tiny, elderly cottages perched on a corner of them: 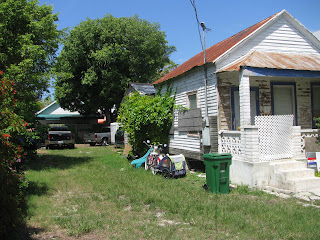 And it's own share of peculiar residents, or residents with peculiar senses of humor: 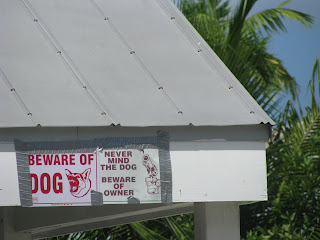 I don't have any such sign at my house but I belong to the big stick and less braggadocio school of thought. On the subject of trespassing I really wanted to invade this secret driveway but contented myself with a picture from a legal spot in the lane: 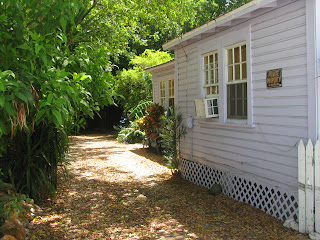 And this next cottage revealed itself a palace when viewed from two sides. Small and intimate from here: Stretching all the way back into the next lot with a side apartment and deck when viewed from here: 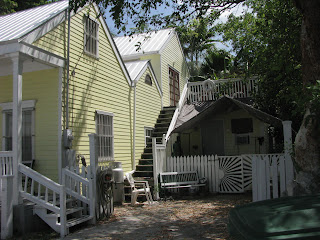 Perhaps I haven't had my head in the air so much lately but when I spotted these sneakers I was once again reminded that people do the most inexplicable things. Urban legend has it the shoes may mark a drug delaing location. I am dubious because who needs to mark such things: 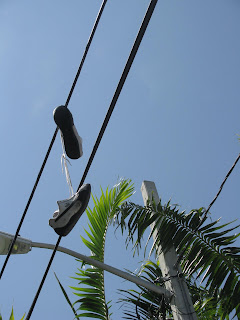 There are large lumpen buildings on Shavers too, this one artfully masked by greenery in bloom: 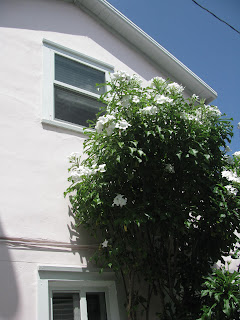 And these identical homes in the famous Conch Cottage style, though rather more spacious than Cuban cigar workers might have enjoyed: 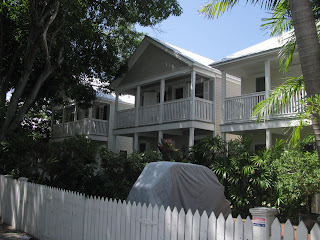 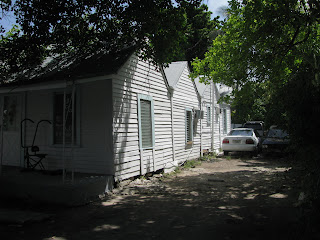 Or this, which is high on the scale of cute: 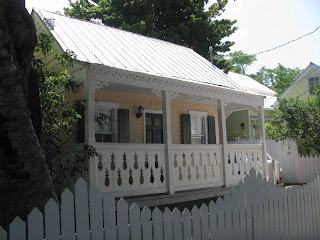 And this a parting thought on the wall at the Petronia Street end: 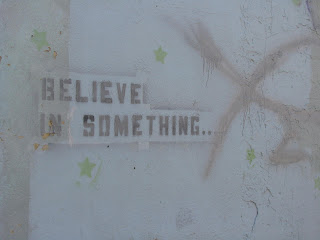 To which demand I can only ask: why?
Posted by Conchscooter at 12:01 AM

You're telling me that the plan is to ban nude beaches? If that's the case it blows my mind. How a country so obsessed with civil liberty and freedom can be so anti anything as simple as nudity blows my mind. I know we were settled by puritans, but that was about a million years ago. I guess a million years isn't so long as one would expect.

Thye fought the good fight but I'm pretty sure dangling your junque en plein air in a public space is not going to happen.
Mind you, you have a point. This is the land after all when the military can now arrest and detain you without charges for as lonf as they want. It seems we cannot get enough of curtailing our freedom anymore.

25% of all prisoners in the whole world are in US prisons. Freedom? for whom? Only China and Russia lock up a greater proportion of its citizens.

A portion of the US defines freedom as their ability to force other people to publicly adhere to their values.

Most people would rather have 'security" than freedom. Most Americans when polled think the first Amendment "goes too far." Some days I have no idea which country I live in, and the conviction grows in me the Conch Republic should be a national state of mind. Instead I get peculiar stares from visitors Up North who thuink pink Crocs are odd.

I have always jokingly said "Costa Rica is looking better all the time." Lately I'm not joking about it as much.

I like to travel in Latin America but trying to live there in a time of turmoil worries me, not least ebcause we stick out in those countries and are viewed as wealthy. And as they say when the US gets a cold Latin America gets the 'flu, and escaping the security state we are building here is going to get even more complicated.
Ooof why can't we all just not be greedy? he whines...