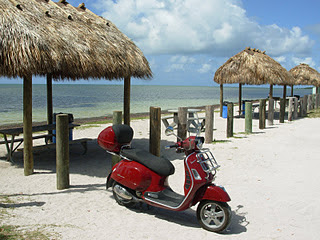 This was the very first entry in my blog, a joke told to me by my buddy Robert, when I rode a Vespa 250 GTS and this blog was called Key West Vespa.

Day One June 13 2007
This dude dies. There's a promising start for a blog. Well, anyway he dies and goes to heaven. St Peter meets him at the Pearly Gates and says:
"We have choices nowadays in Heaven. You get a free trial period in a choice of places. In your case you get to try out the celestial sphere up here, or you get to spend the rest of eternity in Key West.
Day one, among the clouds sipping ambrosia, tinkling the odd harp, lounging around chatting of this and that with the hosts of heavenly angels.
Day Two, our hero gets sent down to Key West to check out the scene. He starts the day with a proper breakfast at Turtle Kraals, fresh eggs, strong coffee, crisp bacon and a view across the Key West Bight Harbor. Then he heads to the beach at Fort Zachary for a swim, a read in a hammock under the pines and a leisurely bike ride back to civilisation for a refreshing smoothie on Duval Street while checking out the passing scene.
After a lunch on the beach at Salute restaurant he takes off from Smathers Beach dangling from a parachute, whips round the harbor and back on land takes in a ride across town to Half Shell raw bar for oysters and a frosty.
In the evening its back to Duval and a night of drinking and carousing.
St Peter barely has to ask.
"Dude," our Hero says, panting from his exertions in Paradise, "its gotta be Key West for me." Nodding gravely St Peter puts him down for eternity in Key West.
Our hero drops off to sleep under a freshly laundered sheet, a fan swirling slowly round above his head.
He awakes in a lather of sweat, the sound of hungry female mosquitoes fills his ears. His lip is swollen from a nighttime mosquito feast and his ears are filled with gritty sand.
"Hey!" A voice roars and the sound of cracking whip fills the air." Get up you lazy bugger! Work! Get to work!"
"Hey, I'm spending Eternity in Paradise!" comes the indignant protest.
"Yeah, yesterday you were a tourist. Today you're a local." 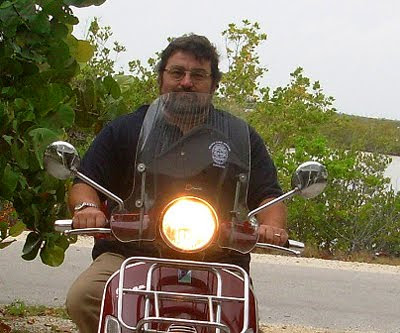 So there we have it. I'm not completely sure how to say goodbye because after all there I will be tomorrow to greet the new year at http://thekeywestlocal.com/ but in the meantime let me say thank you for following this blog and I hope to hear from you on the other side tomorrow. It has been fun and I can't say better than that.

Keep well. do good work and enjoy New Year's Eve with the hope of good things to come next year.

Posted by Conchscooter at 12:01 PM

See you on the other side to be sure!

Thanks for all you've shared with us over the years, it's been great.

Happy New Year to you and yours.

Thank you Michael. I've enjoyed every post and I'm looking forward to your new blogging adventure. Have a great 2012!!!

It was a pleasure meeting you guys.

See you soon "over yonder". It's all an adventure :)

Always good to hear from you.

Thanks for the years of Key West riding, looking, pictures and more.

Good luck on the other side.

And, one last thing -- the Vespa looks far more photogenic than the Bonneville. For whatever that's worth...

Steve Williams
Scooter in the Sticks

The vespa was beautiful, fun and the most comfortable ride I've ever had. I wanted to ride it coast to coast to commemorate my 1981 terip on a P200E. It just kep breaking down.
Bought for $7200 sold ten months and ten thousand miles later for $3200. A sad reality. I never did get to make the trip...

I'm sad to see this end. I came into this blog in the middle. It shall be interesting to be at the beginning of the venture.

Let me say, Happy New Year to you and Layne

Michael,
I never miss a day, and plan to keep tuning in to the new venue. Keep up the good work. Missed seeing you on our Key West trip last year (my fault,not yours).

Dear bob I hope you find purpose and meaning in2012 and plenty of invigorating exercise.
Keith-we shall look forward to your next visit. The kw local is looking good. Chuck is energizing.

So long Crockscooter, and thanks for all the thought-provoking trips down the byways of KW.

I still say you should do a book.

I agree. Be surprised and book mark the new page. I'm this same guy I have been for the past few years.

I sincerely hope that the end of Key West Dairy does not mean that my invitation to come and live under your house (like a troll) has been revoked! And I am looking forward to riding with you at some point in the immediate future... Even it it means starting out at Mile Marker "0" on US 9, or is it US 1?

The answer isn't blowing in the wind but it is fact on the new website.

Michael, best of luck with the new blog. It seems Steve Williams' Scooter in the Sticks is the only one left among the scooter blogs I started following in 2006 when I launched Scootin' Old Skool. Time flies.

I'm still waiting for the call from Huffington Post...

Nooo Michael!! Its too cold in NY and the republican primaries are raging on my TV !! I need this blog!! Hahaha! See you on TRAT where we dodge the right wingers like crazy cage drivers. Remember Rt 1 runs 2 ways. Thank you so much for everything. Looking forward to reading the new blog.

A long time ago you pointed out that your Bonneville enjoys more corners than mine. Too true as I know after my brief ride through the Catskills in October 2010. However right now if it wasn't 57 degrees i'd still be riding and you aren't till spring...happy trails Sal and see you at The Key West Local.
Plus ça change plus ça rest le même.

Thanks. I'm sad to see you as well as many other blogs reach the end of their run, but it looks like you've already got a good start on your new site - I'll try to follow you there!

Brady
Behind Bars - Motorcycles and Life

It was great and I will keep this space open in case i ever need my diary back! It is still my corner of the web.